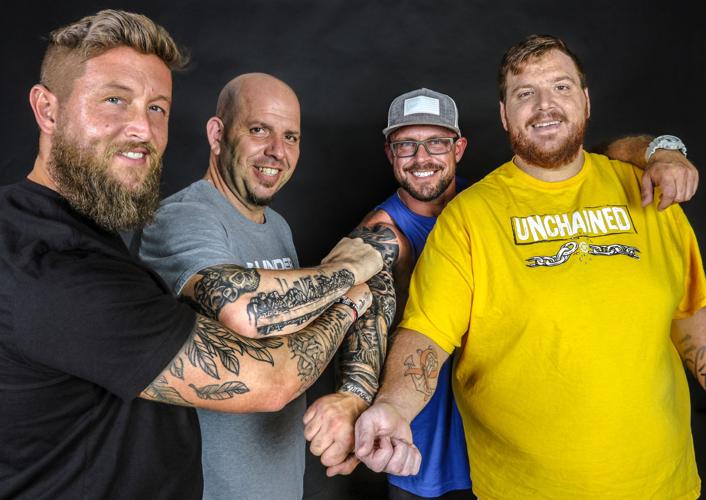 Pictured, from left, are Jordan Wilson, Roger Chilton, Cody Cantrell and Tyler Robbins, who hold out their arms to display their faith-based tattoos. 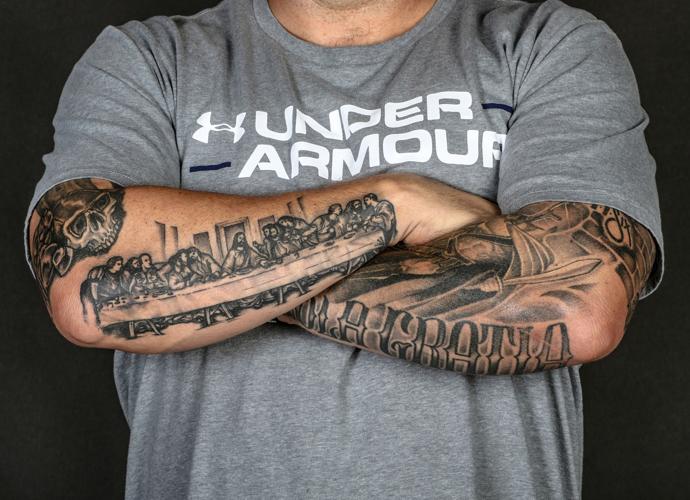 Roger Chilton is pictured with his faith-based tattoos on his arms. On his right arm is a tattoo of the “Last Supper.” 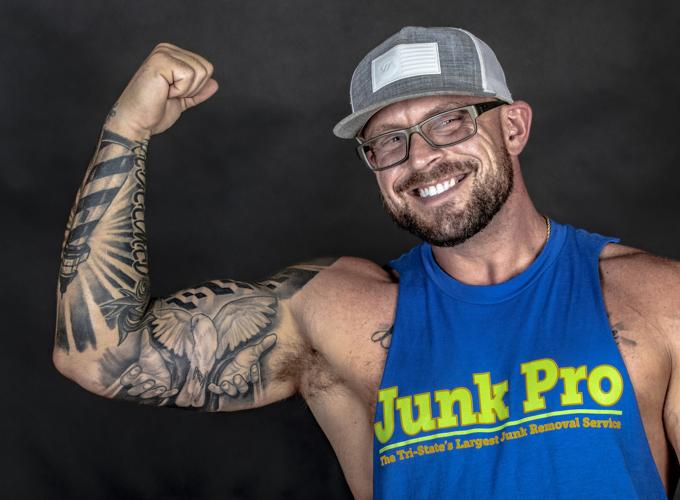 Cody Cantrell displays his tattoo of Jesus’ hands holding out a dove.

Pictured, from left, are Jordan Wilson, Roger Chilton, Cody Cantrell and Tyler Robbins, who hold out their arms to display their faith-based tattoos.

Roger Chilton is pictured with his faith-based tattoos on his arms. On his right arm is a tattoo of the “Last Supper.”

Cody Cantrell displays his tattoo of Jesus’ hands holding out a dove.

Roger Chilton, the 46-year-old co-pastor of Matthew’s Table, grew up during a time when tattoos were associated with rebellion and antisocial behavior.

“I strategically put it on the upper part of my arm so if I wore a T-shirt you wouldn’t see it,” said Chilton, recalling his first tattoo — a cartoon character — at age 18.

In 2006, Chilton became a Christian, which led him to faith-based tattoos that he considers “visual expressions that represent my passion for Jesus that I choose to put on my body.”

Chilton, whose most recognizable tattoo is of the “Last Supper” on his right forearm, said 80% of his tattoos have come since becoming a Christian.

“Over the years, I decided that tattoos could tell my story and provoke conversations in the community and with people who weren’t Christians simply by asking me about my tattoo,” Chilton said. “And that would create conversations where I could testify to them.”

Although the art of tattooing has been around since Biblical times, it’s the Old Testament’s Book of Leviticus 19:28 that reads, “Ye shall not make any cuttings in your flesh for the dead, nor print any marks upon you: I am the Lord,” that is often cited to condemn those who have inked any parts of their body.

Jordan Wilson, a 33-year-old youth pastor for His Church, estimates that 25% of his body is covered with tattoos.

Wilson said Leviticus 19:28 is often quoted out of context, especially when the verse before it forbids the trimming of sideburns and beards.

“Back then, people were tattooing themselves for their pagan gods … and that scripture was talking to a certain people, certain priests to not tattoo for pagan gods,” Wilson said.

Chilton and Wilson, along with fellow Christians Cody Cantrell and Tyler Robbins, are a growing number of believers who use ink to proclaim their faith while also using it to share the Gospel to anyone who questions a tattoo’s meaning or the artwork itself.

Wilson said most of his tattoos are faith-based or tell a story about his spiritual walk.

For example, Wilson has five tally marks on one of his forearms, which represent every year since becoming sober and a follower of Christ.

Cantrell, 34, was raised by “an old-fashioned” mother who steered him away from thinking tattoos were OK.

“I remember saying that I would never have a tattoo and if I did it would never be visible,” Cantrell said. “And now, I have a whole sleeve.”

And every tattoo contained within the sleeve on his right arm, Cantrell said, is “symbolic” of his spirituality and claims Jesus Christ as his “Lord and Savior.”

Among Cantrell’s tattoos are Jesus’ pierced hands holding a dove and the words “Thy will be done” that represent his “spiritual journey.”

Cantrell said he has one tattoo that simply says “redeemed,” which frequently draws attention and questions.

“They’ll say, ‘What does that mean to you?’ and I’ll say, ‘I was dead; maybe not physically dead, but I was dead on the inside, and when God redeemed me I wanted something to represent that. … I dare say it holds me accountable in a way. I have these tattoos, and it’s something to uphold.”

Robbins, 32, came from a conservative Baptist family who viewed tattooing as out of character for a Christian.

“It’s always your body is a temple and a tattoo might be a slight against God,” Robbins said.

Robbins said it took coming out of addiction and becoming a “true” Christian that changed his view about believers and tattoos.

For example, Robbins has the words “empty tomb” written in Hebrew on one of his biceps.

“It’s an expression of love I have toward Christ,” Robbins said. “… It’s a way I can glorify God.”

As tattoos have become more sociably acceptable, there is the expense that varies and that can run into hundreds of dollars depending on size and how elaborate the design is.

As a church pastor, Chilton said he understands why someone might question spending money on a tattoo.

“Men and women 20 years older than me would probably talk more about stewardship — steward your finances or your attention toward things that would be better used. I get that. But those same people have WaveRunners and summer homes. So how you spend your money is the only thing that gets questioned has been my experience.”

And despite tattoos becoming more of the norm even within the church, Chilton said there will always be those who will judge a person by his or her appearance alone.

“Unfortunately, people still do view and judge someone with tattoos, but some of the greatest people I’ve ever met and know are covered head to toe in tattoos,” Chilton said. “Hopefully, tattoos being more acceptable is a sign of the times that we as a society are realizing it’s not what’s on the outside but what’s in the inside that really matters.”

‘We kind of just stared at each other. It wasn’t normal...' The adopted stars who met their biological parents

She LOST A TOOTH just hours before walking down the aisle! You'll never believe these stars' wedding disasters