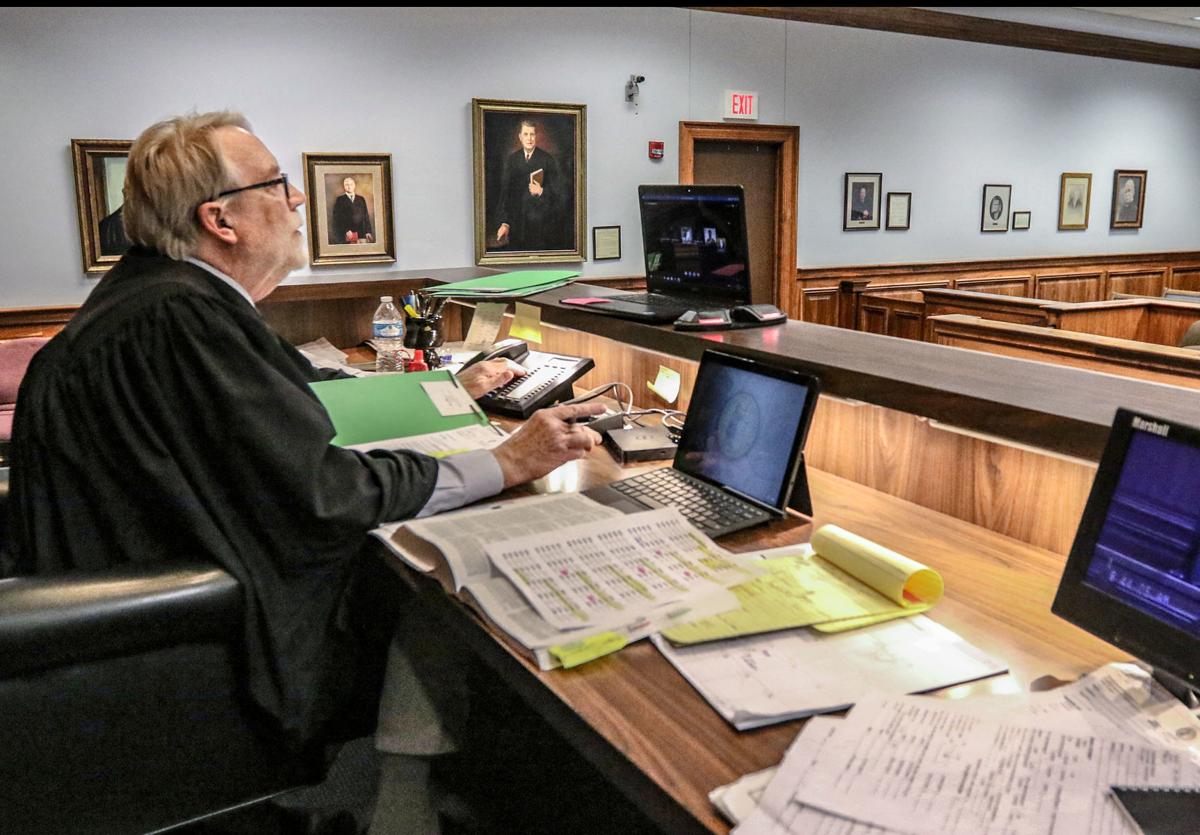 Daviess Circuit Judge Jay Wethington uses a computer April 23 at his bench to conduct a videoconference in his courtroom. Wethington said working remotely through videoconferences “is going to be the future of everybody’s life” when the crisis has passed. 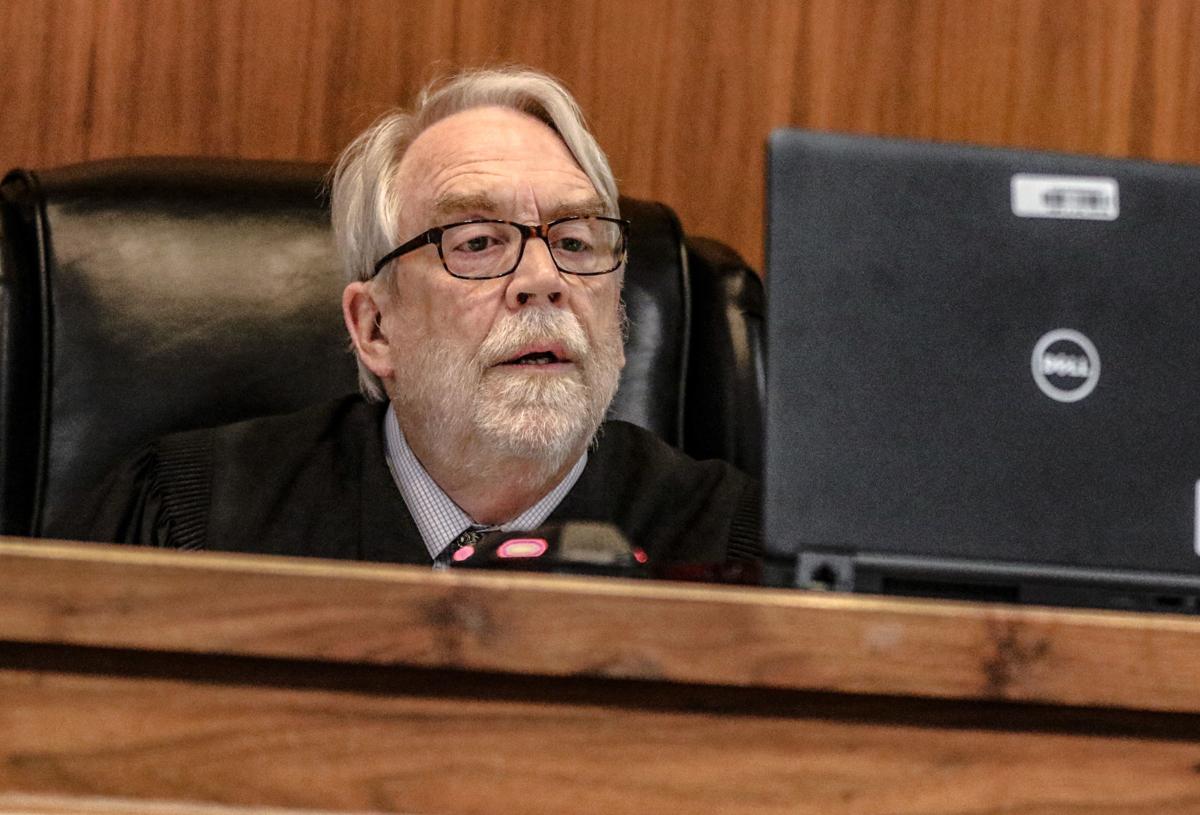 Daviess Circuit Judge Jay Wethington conducts a videoconference in his courtroom on April 23. It’s one way the court system is taking measures to reduce public contact.

Daviess Circuit Judge Jay Wethington uses a computer April 23 at his bench to conduct a videoconference in his courtroom. Wethington said working remotely through videoconferences “is going to be the future of everybody’s life” when the crisis has passed.

Daviess Circuit Judge Jay Wethington conducts a videoconference in his courtroom on April 23. It’s one way the court system is taking measures to reduce public contact.

When the coronavirus forced businesses to close and people to stay away from gathering in groups, the court system also had to take measures to reduce public contact.

While some businesses were forced to shut down, that wasn’t an option for the court system, which began using teleconferencing software like Skype and Zoom to conduct emergency hearings. In the month since the courts were ordered largely closed to the public, judges have held custody and bond hearings, arraignments and first appearance hearings in criminal cases and have even taken plea agreements over the internet.

Court officials said that some of the innovations they adopted by necessity could become a permanent part of how courts do business.

In a recent interview, state Chief Justice John Minton said the courts rapidly adapted to using teleconferencing “because we were forced to, which, in the future, will allow us to do things more efficiently and effectively.”

The pandemic, “pushed us to implement the technology we’ve been thinking about,” Minton said.

“We’ve never had to address this at this level,” he said. “When the courts were closed in 1918 because of the Spanish Flu, the courts had no options. But now, we have options.”

The court system has been adding technology to its processes and proceedings for years. For example, the AOC rolled at an electronic filing system that allows attorneys to file case documents without having to physically go to a Circuit Court clerk’s office.

In Daviess County prior to the pandemic, defendants in the county detention center making first appearances would often appear by videoconference from the jail. Now, the Circuit Courts are also doing certain hearings by videoconference.

“We all had to teach each other to use Zoom and Skype,” Daviess Circuit Judge Lisa Payne Jones said.

“This is a different time” for the courts, Daviess Circuit Judge Jay Wethington said.

“The other day I took (a plea) from a defendant at KSR (Kentucky State Reformatory) by Skype,” Wethington said. “We are doing a lot by Skype.”

Wethington said working remotely through videoconferences “is going to be the future of everybody’s life” when the crisis has passed.

Leigh Jackson, supervising attorney for the Daviess County Public defender’s office, said some hearings could continue to be conducted online after the pandemic passes.

“I think, obviously, everyone being in the courtroom face-to-face is the preferred method,” Jackson said. But some hearings by video conference would be acceptable.

“If a person is in another county jail and the choice is we reschedule them or they appear on Skype,” a hearing by video would be acceptable if the client doesn’t need to communicate directly with his or her attorney, Jackson said.

Some hearings, such as those for probation, are being done by Skype, Jackson said. Not having to physically bring inmates from other jails for hearings would also benefit the sheriff’s department, which transports inmates to and from hearings.

“The sheriff’s office has a limited number of people to do transports,” Jackson said.

The sheriff’s office would “totally support” video hearings that would cut down on inmate transports, he said.

“If we can keep a deputy on patrol to respond to calls for service, that would most definitely be advantageous to us.”

Smith said the state reimburses the sheriff’s office on mileage, but it is not reimbursed for the deputy’s time doing the transport.

“If someone is in Pikeville and we are arraigning him in Daviess County on a felony indictment warrant, he is going to be transported from Pike County all the way to Daviess County for a five-minute hearing,” he said.

Now that officials have had an opportunity to use video hearings, “there will be some rule changes” allowing a defendant to appear by video after the pandemic ends if the defendant waives the right to appear in person, Kuegel said.

“Think of the expense that would save.”

Wethington said hearings by video could have benefits for certain defendants. For example, if a defendant is in a substance abuse treatment facility outside of the county, he or she would not have to experience being brought to court by a sheriff’s deputy.

“Some people don’t need to be transported back into the penal system if they are making progress,” Wethington said.

“If someone is in eastern Kentucky and they are doing well in a halfway house … let’s not upset their progress,” he said.

Jones said working via teleconference does take more work, such as making sure everyone is looking at the same document.

In addition to certain hearings, Daviess County Drug Court has begun meeting by videoconference, and Jones said other specialty courts could follow suit. Some types of proceedings, particularly trials, can’t be handled by teleconference, she said.

Trying to display evidence and documents to jurors “would be extremely difficult,” Jones said. “We are discovering what we can and can’t do.”

Minton’s order closing judicial centers to the public and limiting court activities to emergency hearings and hearings required to protect the rights of defendants is set to expire on May 31. But the courts might need to extend restrictions beyond then.

If so, officials will have to discuss ways to conduct other proceedings, Kuegel said.

“How am I going to conduct a grand jury if the threat is still out there?” Kuegel said. “The grand jury room is not very big … There’s not enough room to put six feet between jurors, witnesses and the prosecutor. We are going through things we are going to have to work through.”

Matthew McConaughey announces he will not run for Texas governor