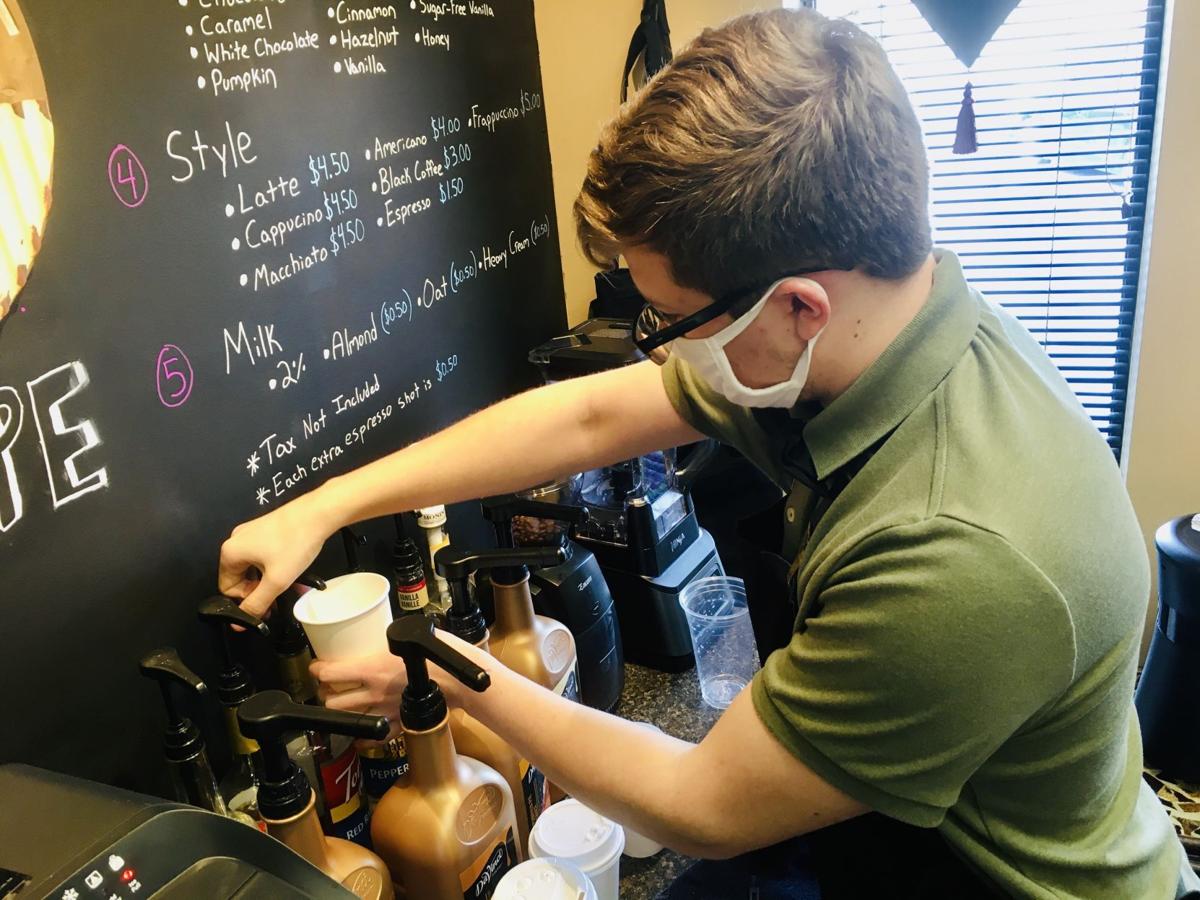 Timothy Poiles prepares one of his coffee drinks for a customer on March 10. He offers regular brews along with other drinks such as lattes, cappuccinos, macchiatos and blended iced coffees. His non-coffee drinks are apple cider, hot chocolate and a variety of teas — chai, green and herbal. 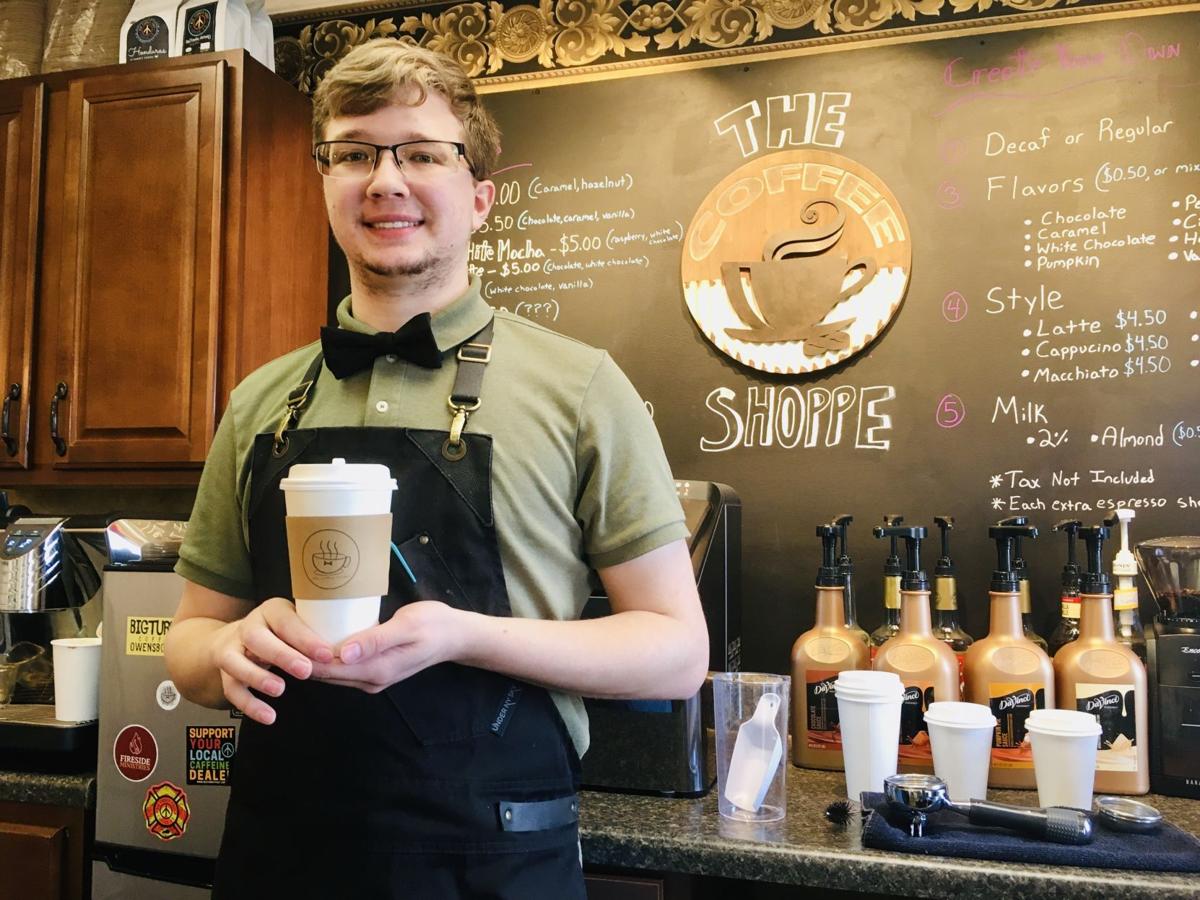 Timothy Poiles prepares one of his coffee drinks for a customer on March 10. He offers regular brews along with other drinks such as lattes, cappuccinos, macchiatos and blended iced coffees. His non-coffee drinks are apple cider, hot chocolate and a variety of teas — chai, green and herbal.

Timothy Poiles is a one-man barista with a plan of faith behind each cup of coffee he sells.

Poiles, 22, became the owner and operator of The Coffee Shoppe at 4921 Goetz Drive in November 2020.

And before he even brewed his first cup of coffee, he made the decision that he would donate 10% of his revenue to Christian-based missions.

Poiles said he works with three specific missions — Fireside Ministries, which is based out of Hancock County that offers events “for the purpose of encouraging the Church, loving our neighbors, and spreading the gospel of Jesus Christ”; Proskuneo Ministries, a Clarkson, Georgia ministry that brings cultures together by sharing the Gospel; and Global Outreach, a ministry in Haiti that provides clean water through digging wells. He rotates them monthly as far as which one he gives to.

“When people come in, I’ll let them know that 10% of the proceeds go to whichever ministry I’m working with that month,” Poiles said. “Some people are willing to give extra money and are like, ‘Hey, put this toward the mission.’ ”

He offers regular brews along with other drinks such as lattes, cappuccinos, macchiatos and blended iced coffees. His non-coffee drinks are apple cider, hot chocolate and a variety of teas — chai, green and herbal.

Poiles learned his barista skills from working at Starbucks.

Poiles said he worked for the major coffee chain for less than a year before he was presented with the opportunity of opening a small coffee business that would connect to Kennise Salon and Barber Studio owned by Tonya Howard.

“It was definitely a major of leap of faith but it was also one of those things that I prayed about for a couple nights after Tonya asked me about it,” Poiles said. “It’s kind of like one of those things, when you know God’s in it and He’s just telling you, ‘Hey, this is what you need to be doing.’ It was pretty obvious to me … it just felt right because I just felt God in it.”

Howard, who’s known Poiles and his family for years, said she thought her clients would like the idea of having the convenience of a coffee or a specialty drink before or after their hair appointments.

Howard added that Poiles’ willingness to donate to missions also made the partnership even better.

“My heart has always been for missions and giving a portion back to missions,” Howard said. “It was a wish that I had but that was something I didn’t feel like I could impose on somebody. But he was so like-minded with me; he was excited about that aspect as well. It was just a great match and the timing was just perfect.”

Poiles is also is a senior at Western Kentucky University. He’ll graduate in May with a bachelor’s degree in social and behavioral sciences with a minor in leadership.

“Throughout my whole college career, I’ve just really been confused about where I’m going because God would lead me down a completely different path,” Poiles said. “But I have to be like, ‘I trust You.’ ”

Even after he graduates, Poiles said he plans to stick with the coffee business full-time with the goal to grow it into something larger.

“I’m definitely hoping that in the next couple of years I’ll be able to secure my own building somewhere,” Poiles said.