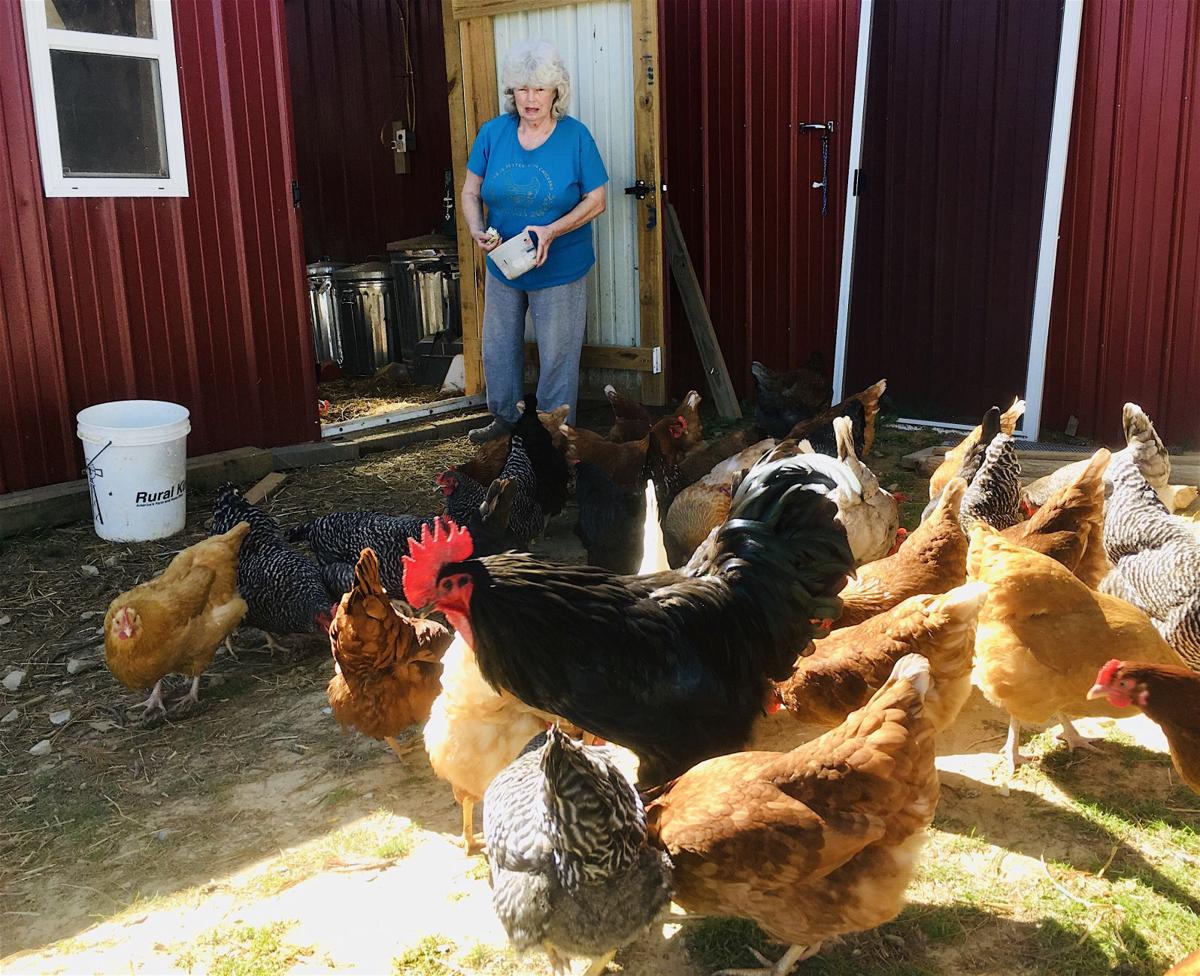 Knottsville resident Janice Roberts feeds her hens Monday while her rooster Jersey protects the flock outside the coop. 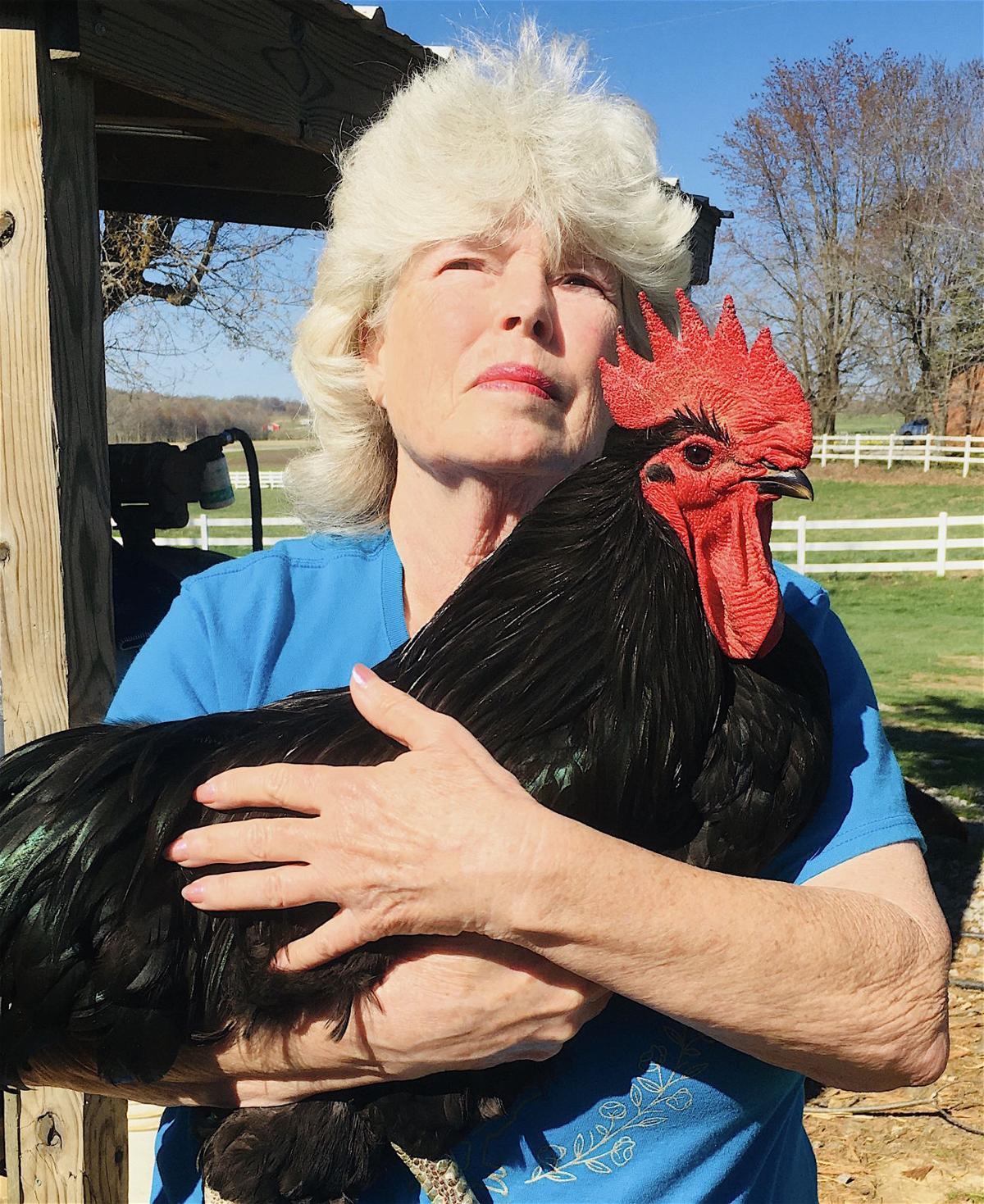 Janice Roberts holds her rooster Jersey on Monday on her Knottsville farm. He is a Jersey Giant breed, which is where he gets his name.

Knottsville resident Janice Roberts feeds her hens Monday while her rooster Jersey protects the flock outside the coop.

Janice Roberts holds her rooster Jersey on Monday on her Knottsville farm. He is a Jersey Giant breed, which is where he gets his name.

When it comes to roosters, they have a reputation of being loud and aggressive.

Knottsville resident Janice Roberts, however, would argue her rooster she affectionately calls Jersey is as friendly as any other pet.

Roberts purchased Jersey, which is a Jersey Giant breed, as a chick in July 2019 at Rural King.

However, she left the store not knowing its sex.

“About two months in, he was in the house and all of a sudden we heard this (crowing) sound,” Roberts said. “We thought, ‘Uh-oh, it’s a rooster. But it’s turned out well because he’s a very special little boy. He loves sitting in my lap and he’ll even go to sleep there.”

Prior to Jersey, Roberts had raised chickens off and on over the years.

Roberts, a retired Daviess County Public Schools teacher, said she would often bring eggs into her classroom so her students could witness the birth of the chicks.

“When we hatched them out, I had a pan in my room so the kids could read while they watched (the chicks),” Roberts said. “I think it helped relax the kids a little.”

But when Roberts brought Jersey home, he was the first chicken she had in some time.

And for months, the two bonded.

“I just kept him in the house with me,” she said. “I had a great big double-dog pen in the summer room that he stayed in,” Roberts said. “…He’d just stay with me all the time and we’d go for a ride on the 4-wheeler. He wintered over because I didn’t have a chicken house at the time. And he would sit there with me and watch TV with me at night.”

Although Jersey bonded with Roberts, he never developed an attachment for her husband, Jerry.

Jerry Roberts said his family raised chickens when he was growing up but they were more for eggs and meat than pets.

“That’s about all we ate — eggs in the summer — and then in the wintertime, Mom killed a chicken for the weekend,” Jerry Roberts said. “This rooster, he doesn’t like me. You could go over there and he won’t do anything to you. But he don’t like me at all.”

Jersey no longer lives in the Robertses’ home. Instead, he stays outside in a large coop with the more than 30 hens that have since been added to the 100-plus acre farm.

Jersey is the hens’ protector by keeping an eye on the sky.

“If he sees a hawk, he’ll let a signal out and all the hens know that something’s in the air,” Roberts said. “And there’s another signal if something is on the ground. Like if a coyote came around, it’s a different call.”

Although Jersey is still Roberts’ favorite, she said spending time with the hens has a calming effect on her.

“It’s therapeutic to me,” she said. “They’ll walk with me around the farm and I can sit out here for hours with them.”

Roberts has also given most of her hens names — Iris, Sunday and Yankee are among them.

And now that they have names, they’re in no danger of becoming a meal even after they cease producing eggs.