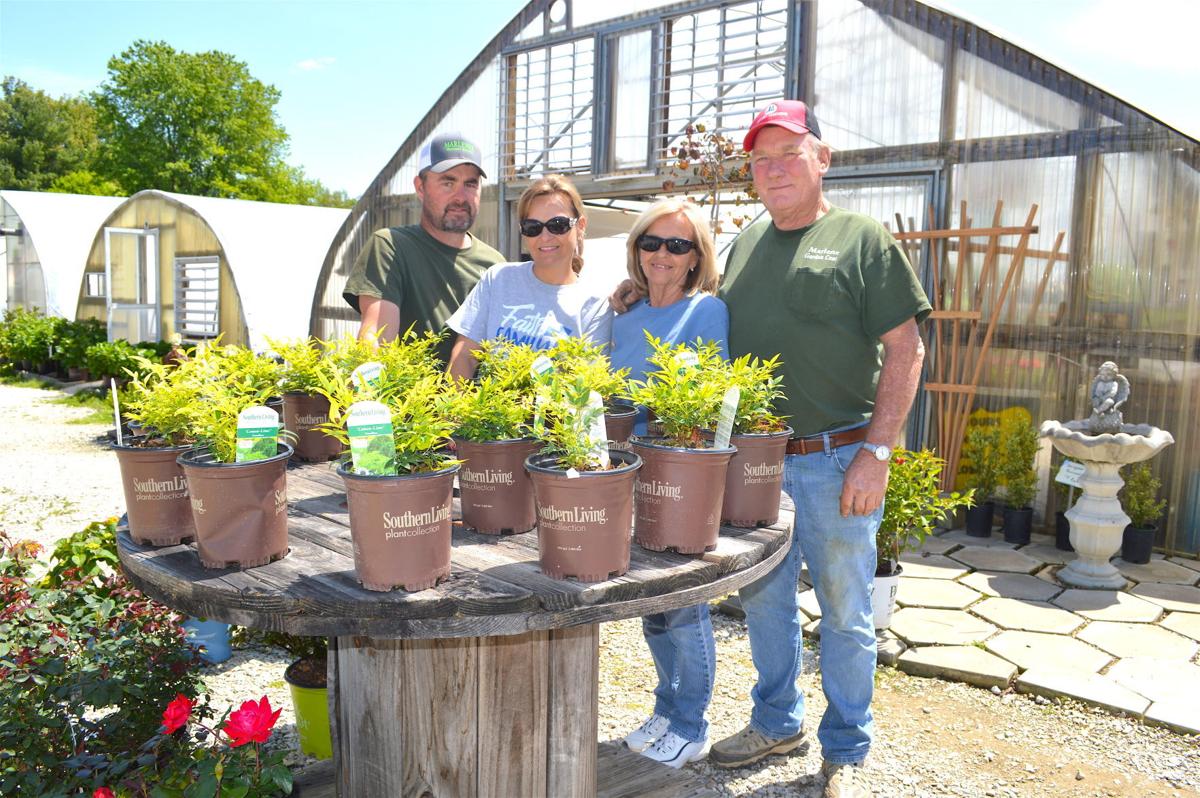 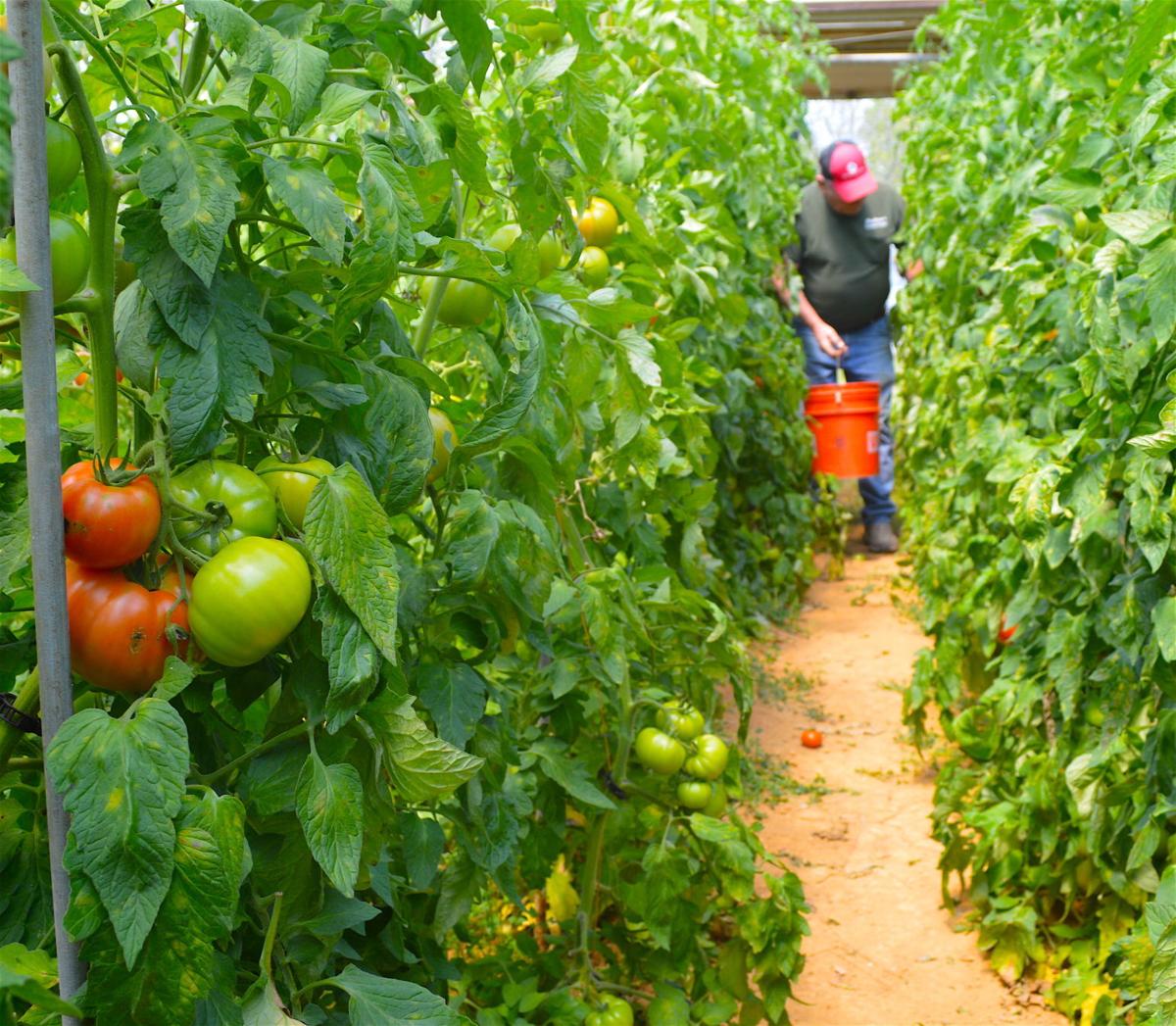 Mike Hamilton walks inside one of the tomato greenhouses on Monday. 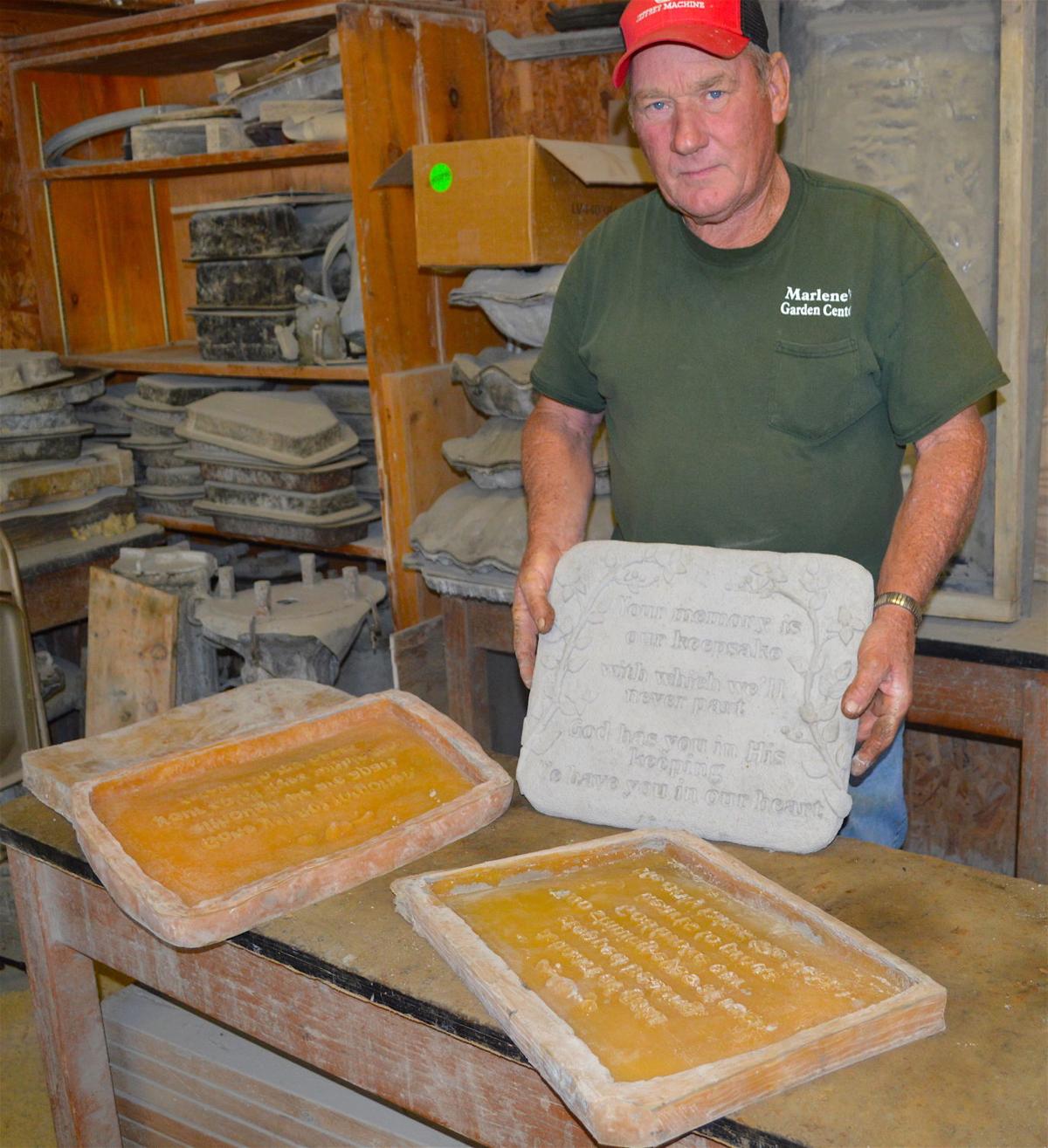 Mike Hamilton holds a concrete bereavement stone that he makes from molds inside his shop to sell at Marlene's Garden Center. Hamilton also makes other concrete yard ornamentals such as bird baths and statues.

Mike Hamilton walks inside one of the tomato greenhouses on Monday.

Mike Hamilton holds a concrete bereavement stone that he makes from molds inside his shop to sell at Marlene's Garden Center. Hamilton also makes other concrete yard ornamentals such as bird baths and statues.

There was a time when Mike and Marlene Hamilton farmed 800 acres of row crops in Philpot.

But that all changed 24 years ago when Marlene Hamilton asked her husband for a small greenhouse to raise vegetable starter plants for herself.

Now the family business, which includes daughter Amy Jenkins and son-in-law Justin Jenkins, has gone from selling flowers and plants to also offering tomatoes, mulch, shrubs and trees, and concrete yard ornamentals such as birdbaths and stepping stones.

Three of the greenhouses support the tomato side of the business — two for growing each year and one left empty for rotating.

The former farmers specialize in early greenhouse tomatoes, which are sold to their customers, local grocery stores and restaurants.

On Monday, they picked 745 pounds of tomatoes.

Amy Jenkins, who is also a part-time hairdresser, said the tomatoes are what allowed her and her husband to join the business.

“After we got married, Justin wanted to be part of the business,” Amy Jenkins said. “We needed another source of income to sustain a second family coming in. But every year, we seem to get bigger and bigger. The trees and shrubs are bigger (sellers) now than they were three years ago. We didn’t even offer trees and shrubs five years ago.”

Despite not being located in Owensboro or on a major thoroughfare, Marlene’s Garden Center has continued to thrive.

Amy Jenkins said the buildup of Kentucky 54 with retail, restaurants and housing has contributed to the success of the family business.

“Town’s coming to us,” Amy Jenkins said. “…The subdivisions are getting closer. The growth of 54 has definitely been to our advantage.”

And during the COVID-19 pandemic, they didn’t see any drop-off in sales.

“It worked out really well,” Marlene Hamilton said. “By Mother’s Day, we sold down a lot this year and last year.”

Although the spring is their busiest time, Marlene’s Garden Center operates year-round.

When they’re not selling plants, flowers and tomatoes, they’re selling concrete yard ornamentals and stepping and bereavement stones that Mike Hamilton creates out of his shop that used to contain his farm equipment.

He calls that part of the business Bedrock Concrete.

Mike Hamilton said he had mixed feelings about quitting farming, but he was going to have to spend $1 million to stay in it once his wife decided to focus on the garden center.

“She and I were partners on the farm,” Mike Hamilton said. “She had her own tractor and she worked just like a man. But when she went to the greenhouse stuff, that meant I was going to have to hire help, have to have more acres and more equipment.”

And looking back, Mike Hamilton said he has no regrets in joining his wife and helping her build Marlene’s Garden Center.

“We make more off these 2 acres than we ever did off those 800 acres of ground,” he said.