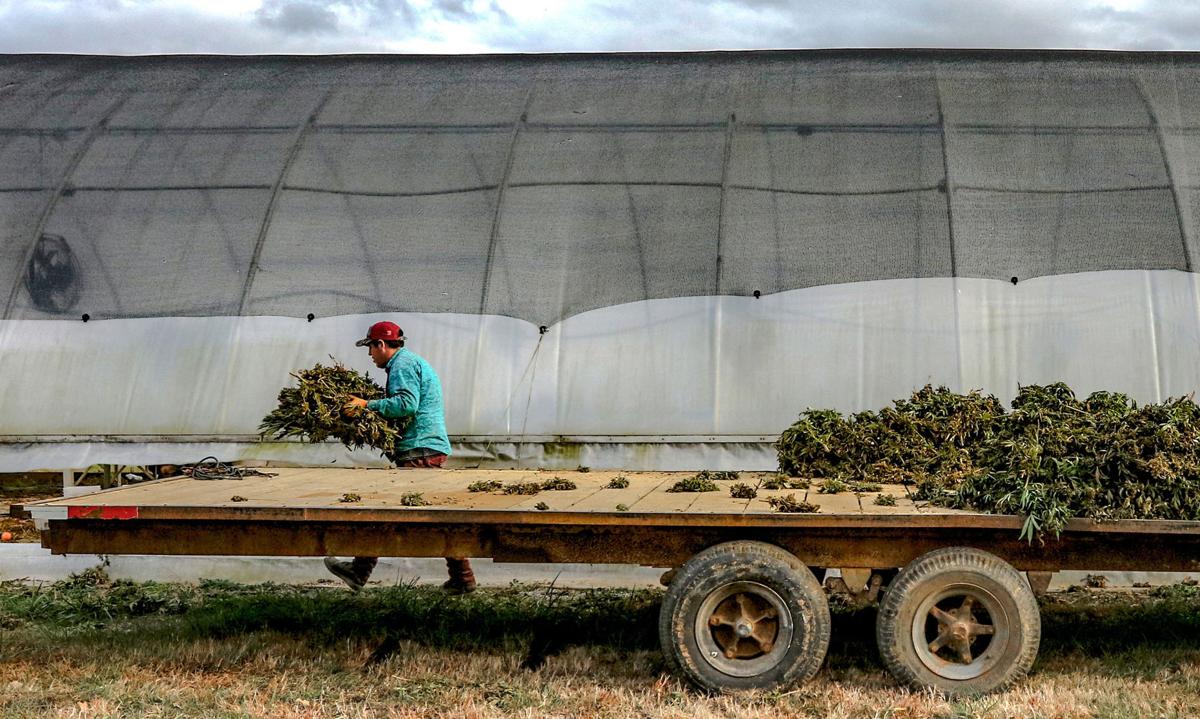 Carlos Mora carries a stack of cut hemp plants from a trailer to the greenhouse Tuesday for drying on PJ Murphy’s farm in McLean County. 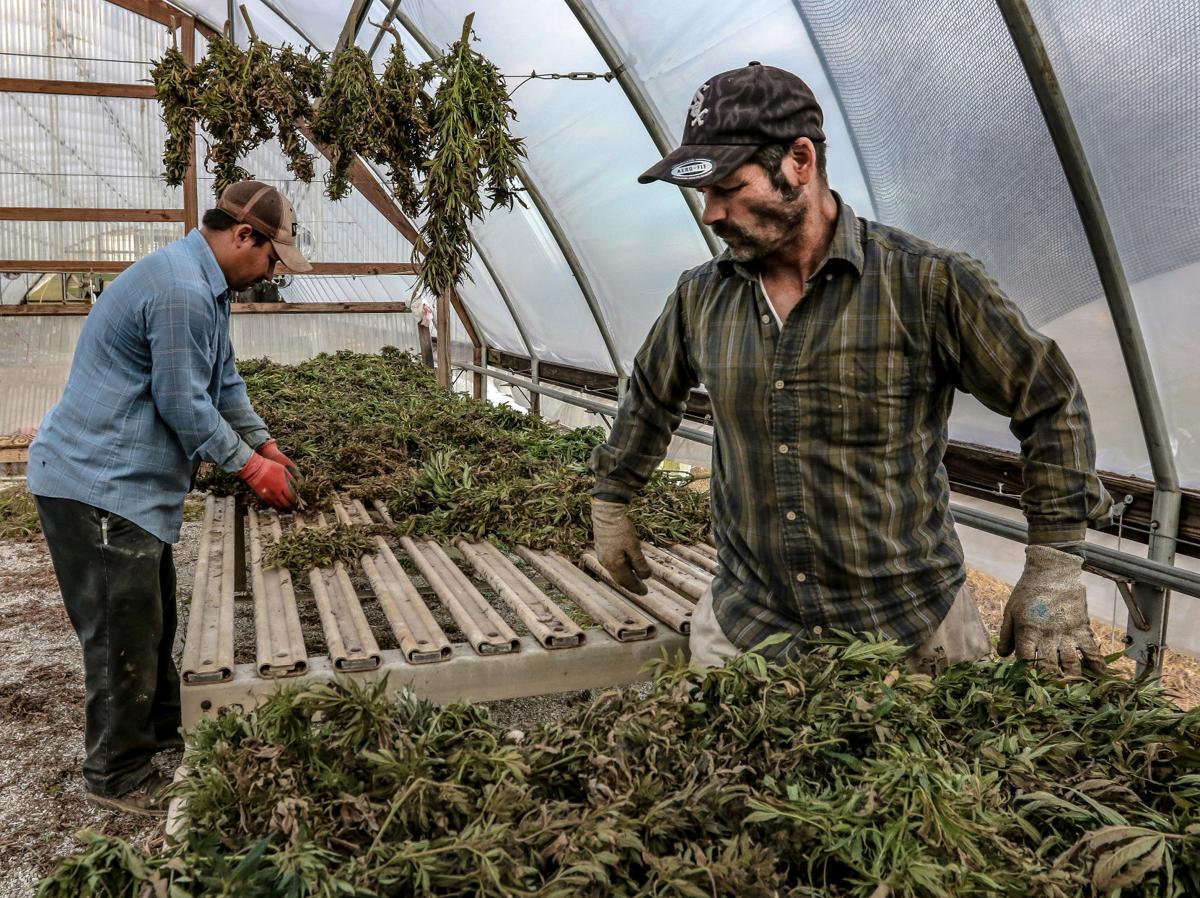 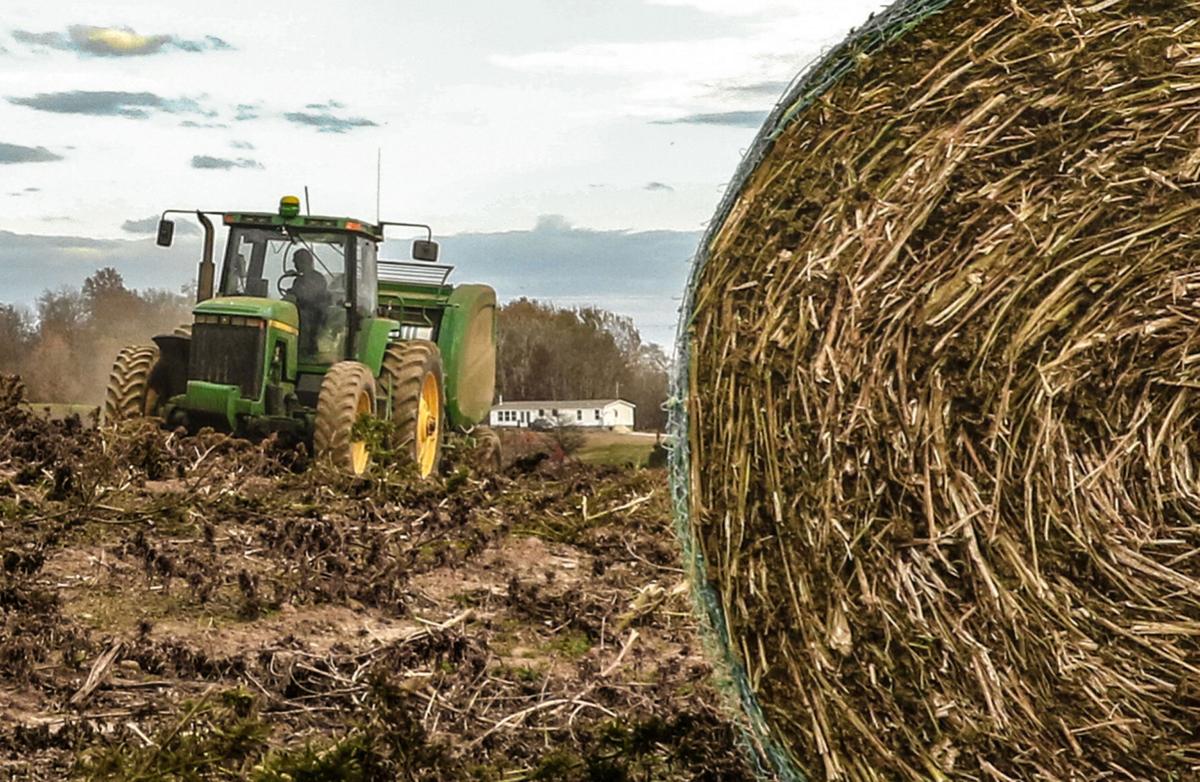 PJ Murphy uses a hay baler to bale hemp plants Tuesday while harvesting the plants on his McLean County farm.

Carlos Mora carries a stack of cut hemp plants from a trailer to the greenhouse Tuesday for drying on PJ Murphy’s farm in McLean County.

PJ Murphy uses a hay baler to bale hemp plants Tuesday while harvesting the plants on his McLean County farm.

In a year’s time, hemp has gone from being hyped to now falling out of favor with growers around the commonwealth.

Two years ago, Ohio County pharmacist John Fuller invested thousands of dollars into building a hemp operation on his farm near Beaver Dam.

He grew 18 acres of hemp in 2019 only to be derailed by a now-defunct Owensboro processor that failed to deliver on its part of the contract to produce CBD oil.

Holding out for some hope, Fuller said he grew 5 acres this year, which also turned out to be a fruitless endeavor.

“We overwintered our crop in the greenhouse so we had about $20,000 invested in labor, fuel and things like that,” Fuller said. “…We had the plants so we planted in May hoping that there would be a change.”

Although Fuller said the COVID-19 pandemic didn’t help his cause, he added that the Kentucky Department of Agriculture has done little to improve the hemp market.

“We bush-hogged it back in early October,” Fuller said. “The market — there’s still nothing there. The KDA hasn’t done anything different. No processors. People offering $1 a pound. So we decided to bush-hog it instead of spending the money on harvesting it.”

KDA Commissioner Ryan Quarles doesn’t disagree about the need for more markets beyond CBD oil, but he places the blame on the U.S. Food and Drug Administration for Kentucky’s hemp woes.

“The biggest, single factor holding back hemp in Kentucky is the Food and Drug Administration unwilling to provide the hemp industry clarification and guidance on how this crop will eventually be regulated,” Quarles said. “So in Kentucky, we have invented a program that’s been replicated in dozens of other states and we merely make sure the (federal) farm bill is being followed. But when it comes to the future of hemp, it’s the FDA that is the biggest single factor that must be addressed.”

While waiting for state and federal hemp policies to gel with each other, that has left growers such as Neil Rudy holding hemp from a season ago.

However, Rudy grew 5 acres of hemp in 2019 that he has been unable to sell.

Rudy said that experience led him to give up on the crop after one season.

“The reason we didn’t grow it is because we never got paid for our first crop,” Rudy said. “It’s setting in a factory right now in a distilled form and there’s no demand to sell it. The oil isn’t worth anything.”

He said the cost came from the plants, and then the labor to plant, maintain and harvest it.

“I was very disappointed but I knew it was a risk when I went aboard with it,” Rudy said. “But we never dreamed we wouldn’t collect anything off the crop.”

Rudy’s and Fuller’s frustrations were felt across the commonwealth.

According to the Kentucky Department of Agriculture, there was a dramatic drop in the number of hemp acres planted in 2020 versus 2019. The KDA reported 26,000 acres of hemp were planted a year ago compared to 5,000 acres this year.

PJ Murphy, a McLean County farmer, is among the growers who have yet to abandon hemp.

Murphy said he found out-of-state markets in North Carolina and Nevada with hemp cigarette makers. Kentucky currently prohibits hemp cigarettes to be sold within the state because law enforcement officials have argued it’s too difficult to distinguish between hemp and marijuana when smoked.

However, Murphy was initially told he would get between $30 to $40 per pound, but he discovered those numbers were also exaggerated.

Murphy, who uses a greenhouse to grow his own starter hemp plants, said his break-even point is $6 per pound.

Although Murphy is still willing to invest in hemp, he also understands why people are now skeptical of the crop.

“There was way too much hype and people took it way too serious,” Murphy said.

Psychologist sings on YouTube to help kids cope with stress