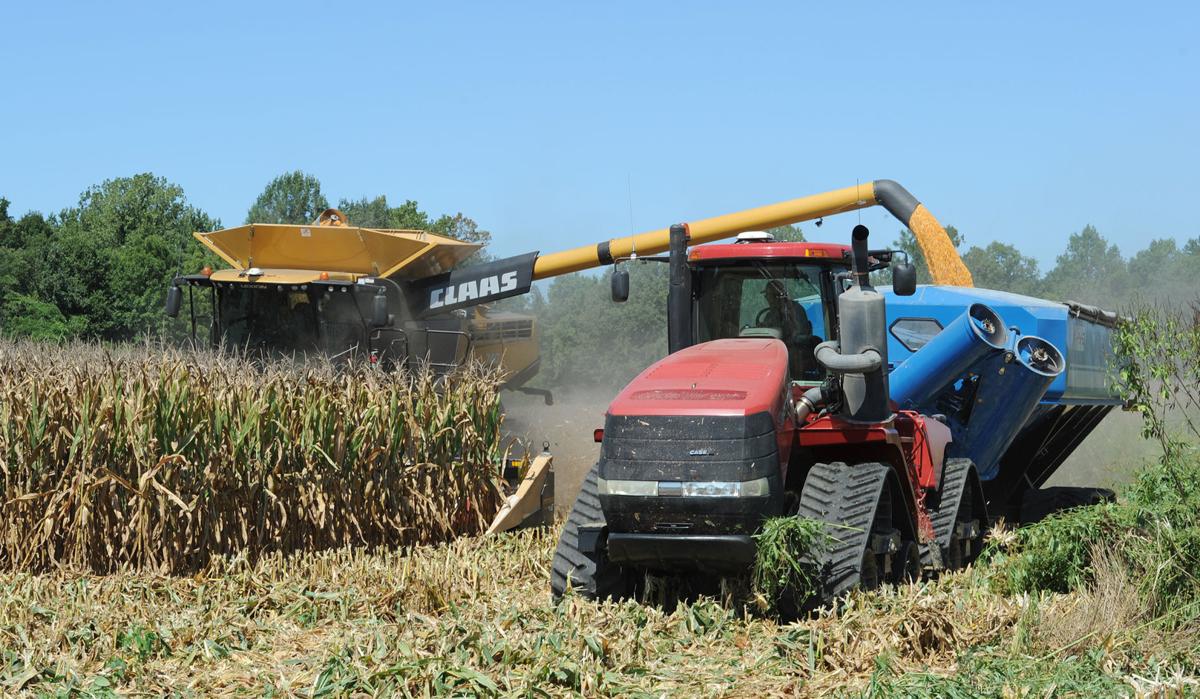 Matt Knott drives his Claas Lexion 740 combine as he unloads corn into a grain cart driven by Jerry Knott while harvesting corn Wednesday at Knott Farm off Curdsville-Delaware Road. 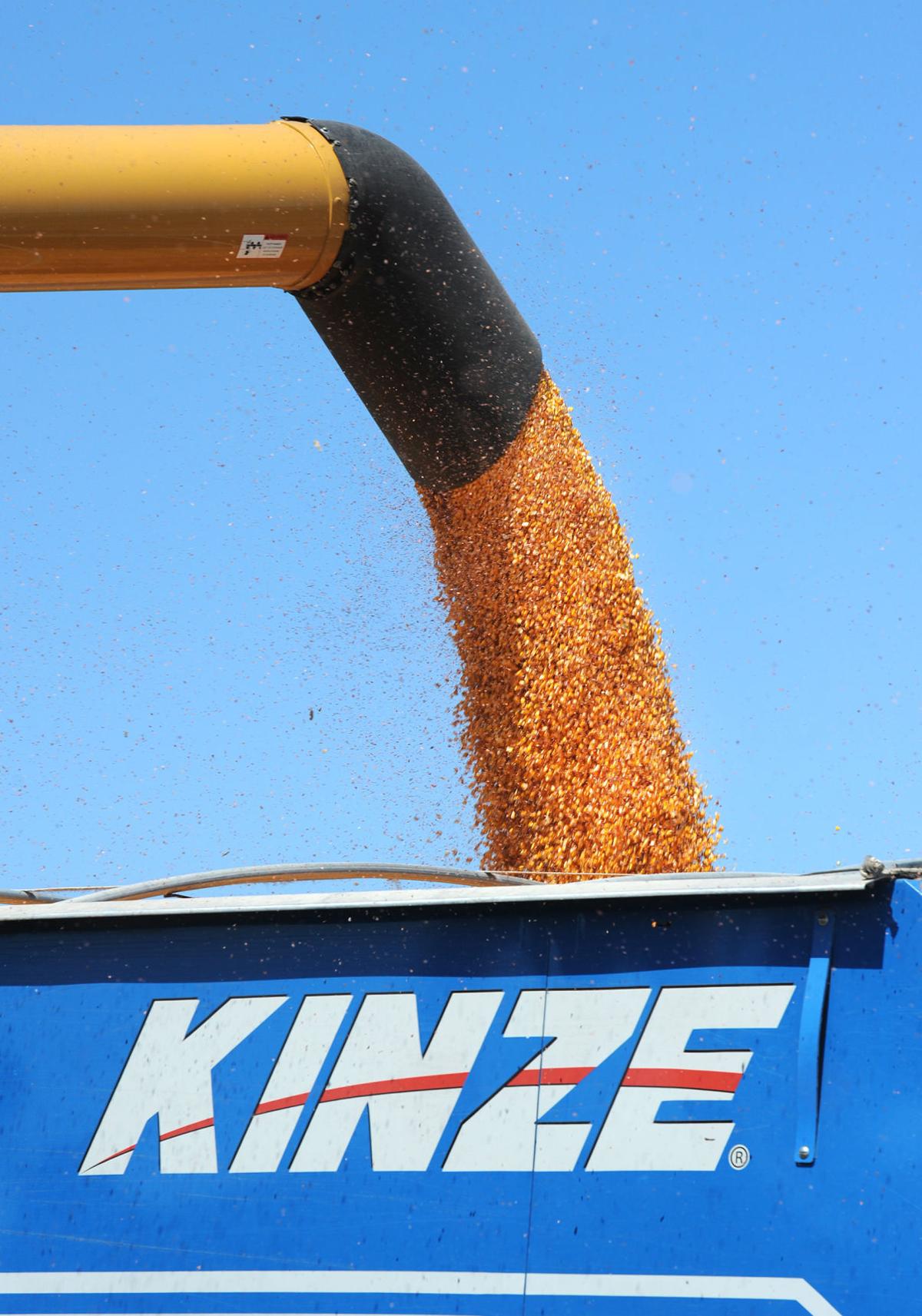 Matt Knott unloads corn from his combine into a grain cart while harvesting corn Wednesday at Knott Farms.

Matt Knott drives his Claas Lexion 740 combine as he unloads corn into a grain cart driven by Jerry Knott while harvesting corn Wednesday at Knott Farm off Curdsville-Delaware Road.

Matt Knott unloads corn from his combine into a grain cart while harvesting corn Wednesday at Knott Farms.

Despite being hundreds of miles away from where Hurricane Ida made landfall, local farmers still may not escape its aftermath.

The facilities suffered major damage and power outages that they’re still recovering from two weeks later, causing major disruptions and delays in barges that carry grain up and down the Ohio and Mississippi rivers.

Anthony Jones, marketing specialist for Owensboro Grain, said every day that barges and exports are delayed in the Gulf creates concern, especially for local farmers who are entering peak corn and soybean harvest seasons.

“Right now, it does sound like there’s going to be a possibility of continued logistical situations because of the storm for many of the grain farmers that rely on the river segments,” Jones said. “In particular, our guys in the Ohio River valley. And one thing we’ve seen is that many barge lines are telling their (grain elevator) customers that there’s a possibility all of the barges on the books may not come to us.”

According to Associated Press reports, Ida disrupted grain and soybean shipments from the Gulf Coast, which accounts for about 60% of U.S. exports. Ida sunk multiple barges and boats in the lower Mississippi River and caused debris that obstructed the navigation channel.

And when it comes to grain prices, any delays negatively affect what’s called the basis, also known as transportation cost. It impacts the bottom line of both farmers and grain operations that rely on the river traffic to move their commodities.

Jones said Owensboro Grain processes most of the soybeans that it receives, but the corn must be shipped off.

“We feel pretty confident about our ability of handling the soybean harvest; the corn harvest is a different scenario because our corn movement is dependent upon the river logistics,” Jones said. “…So we’ve seen the local cash price weakened as far as the basis goes. That’s because the barge freight that we require to keep corn moving, and to keep soybean meal moving, the price to buy a barge has gone up tremendously in the past week.”

Jeff Coke, who farms along the Daviess and McLean county lines, said half of his 1,200 acres of corn is exported, with the other half sold to area chicken producers.

“It’s already affected us — it affected us the very next day (after Ida hit),” Coke said. “That’s because your facilities down there to unload the barges on the Mississippi, and then load them onto the big ships, got damaged so bad it’s going to be awhile before they get them up and running. As soon as that storm hit, and the very next day, the price of corn was down 25 cents — and that was the basis.”

Coke does have storage bins that will allow him to hold his corn until shipping and exporting conditions improve in the Gulf.

“We’re going to harvest, but we’ll have to be a little innovative in the marketing of the rest of it,” he said. “We may have to wait a little longer before they get running and move the amount they need to move; I’m not sure if all the (grain operations) are down, but I guarantee a whole bunch of them are.”

Mack Estes, who farms about 1,000 acres near Maceo, said he doesn’t have much storage space, so his corn needs to be directly taken from the field to local grain operators on the Ohio River to be shipped to the Gulf.

Estes added that he will start harvesting this week because leaving the corn in the field until conditions improve in the Gulf is not an option.

“When it’s ready, you need to get it because every day that it sits there you lose,” Estes said. “And then what you’re hoping is that you don’t have a wet fall. If it gets muddy, it really takes a toll, and it’s hard to get it out, get it delivered and it won’t dry. …And if they can’t unload it, you’re stuck.”

As far as corn futures go, they were hovering around $4.70 per bushel and soybeans were at $12.60 per bushel during the past week.

Jones said the prices still weren’t bad considering the drop that’s been caused by the hurricane.

However, much of how well the harvest season goes will depend on how soon the grain operations recover in the Gulf.

“Worst-case scenario, you start running into limited hours on receiving, and this isn’t just Owensboro Grain, this would be any grain facility along the river that relies on barges,” Jones said. “So you’ll start seeing limited hours or no hours at all for receiving until a grain elevator can get a barge in. Don’t know if it will get that bad, but it has the potential that things at the last part of September, going into October, could cause a lot of headaches.”