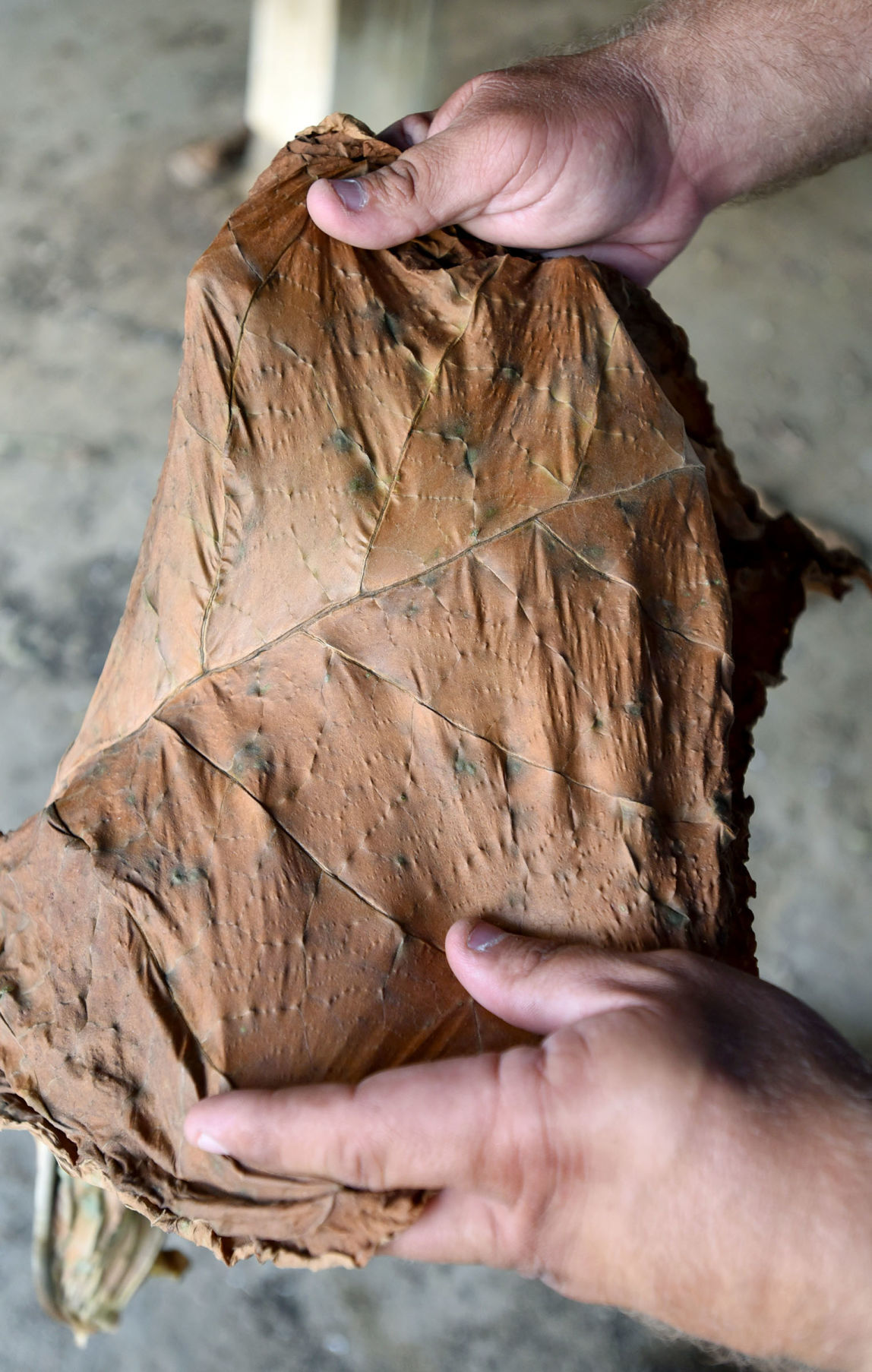 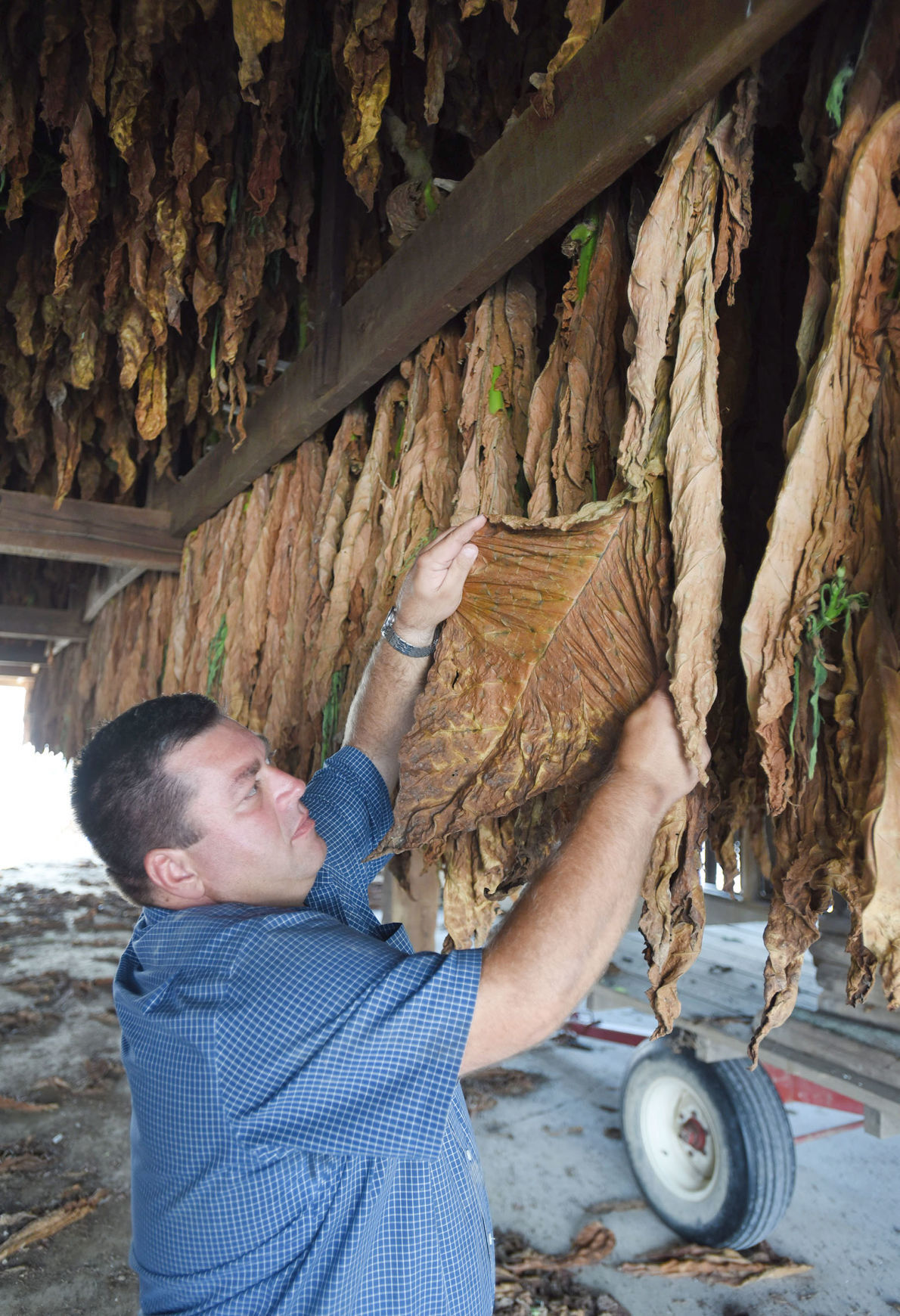 Above: Brad Stephen of Stephen Farms & Garden looks at a Connecticut Broadleaf dark air-cured tobacco leaf that hangs in his tobacco barn on Wednesday at 3901 Hayden Bridge Road.

Above: Brad Stephen of Stephen Farms & Garden looks at a Connecticut Broadleaf dark air-cured tobacco leaf that hangs in his tobacco barn on Wednesday at 3901 Hayden Bridge Road.

Brad Stephen and his family have been growing tobacco most of their lives.

He and his family operate Stephen Farms LLC off of Hayden Bridge Road in western Daviess County.

As burley tobacco profits have continued to trend downward the last 10 years, Stephen and his family have had to think outside of the box. What was once considered a Kentucky “cash crop” has become more work than it’s worth for many farmers.

Last year, the U.S. Department of Agriculture’s National Agricultural Statistics Service reported that the tobacco slump is continuing, with burley tobacco production down 22% from 2019.

When Stephen first started farming tobacco 20 years ago, it wasn’t a challenge for him to make 3,000 pounds an acre. That seems more impressive when considering the tools that weren’t available to him and other farmers at that time.

Now, he said, it’s a struggle to make 2,400 pounds an acre, especially when he now pushes about $4,000 an acre of production costs.

“So you’re not working with a lot of margin there,” he said. “There’s a lot of risk and little reward.”

While that trend doesn’t appear to be improving, farmers like Stephen are resorting to alternative methods.

For the past two years Stephen has been growing Connecticut broadleaf tobacco that will specifically be used to wrap cigars. It’s a more labor intensive tobacco strain, but it’s an option for Stephen and his family to stay in the business in a way that is more profitable.

Stephen said he and his family have been “experimenting” with Connecticut broadleaf.

That first year was wet, as well, so a lot of crops failed or were diseased. The tobacco that was meant to be used for wrapping cigars was mostly sold as filler.

“We aren’t sure if this is the answer quite yet,” he said.

This year he grew 10 acres.

Connecticut broadleaf has to be handled more easily. It’s more sensitive, Stephen said, because buyers want the center part of the leaf to be clean and flat. It also doesn’t sit in the field as long as traditionally tobacco.

It heads to the barn about three weeks after topping, Stephen said, when traditionally it would be about six weeks before tobacco is hung in the barn.

His crop this year still has a few more weeks to hang in the barn before it’ll be sent down to Gallatin, Tennessee to be sold and processed.

While Connecticut broadleaf is different and difficult, Stephen said, it feels good to grow tobacco for companies that want it and can’t get enough of it.

“It’s been a challenge to adjust to this,” he said, adding that he has always enjoyed tobacco farming, but tobacco companies “have just about taken all the fun out of it.”

Still, he will continue on and adjust to the market and figure out ways of growing different tobacco for varying needs.