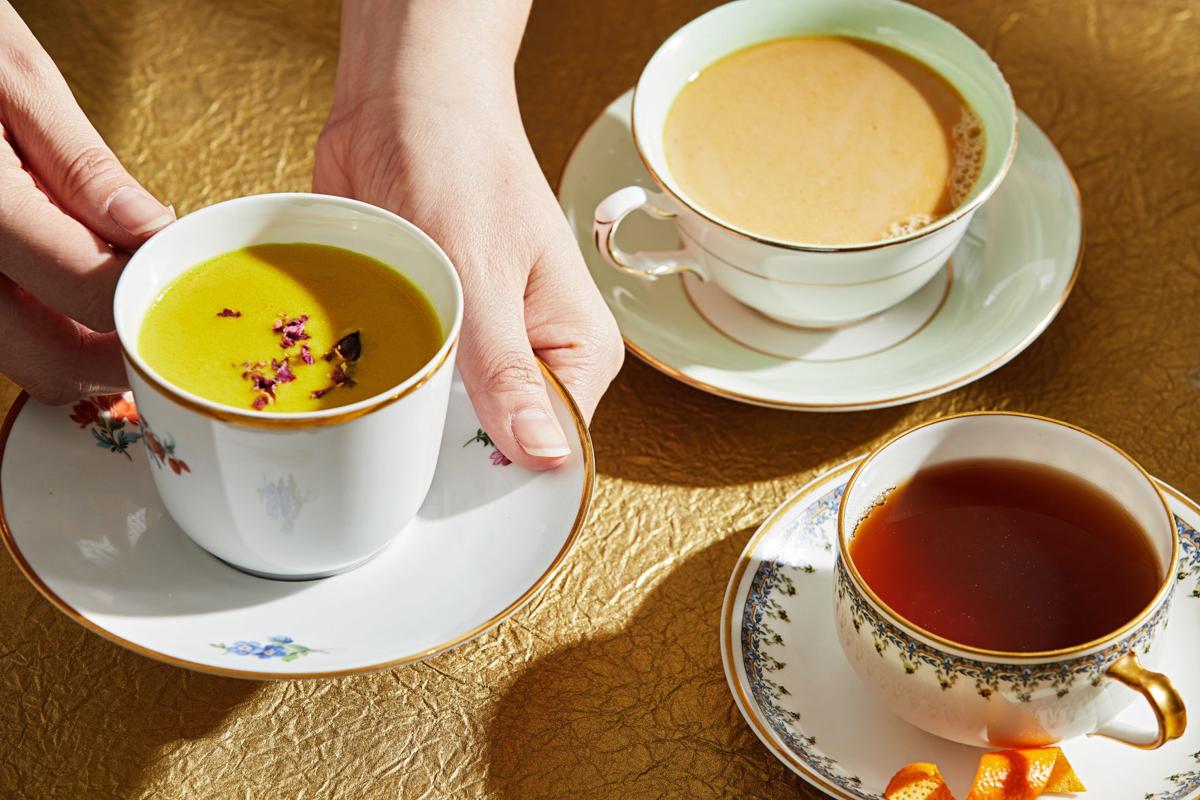 Warm winter drinks. MUST CREDIT: Photo by Tom McCorkle for The Washington Post. 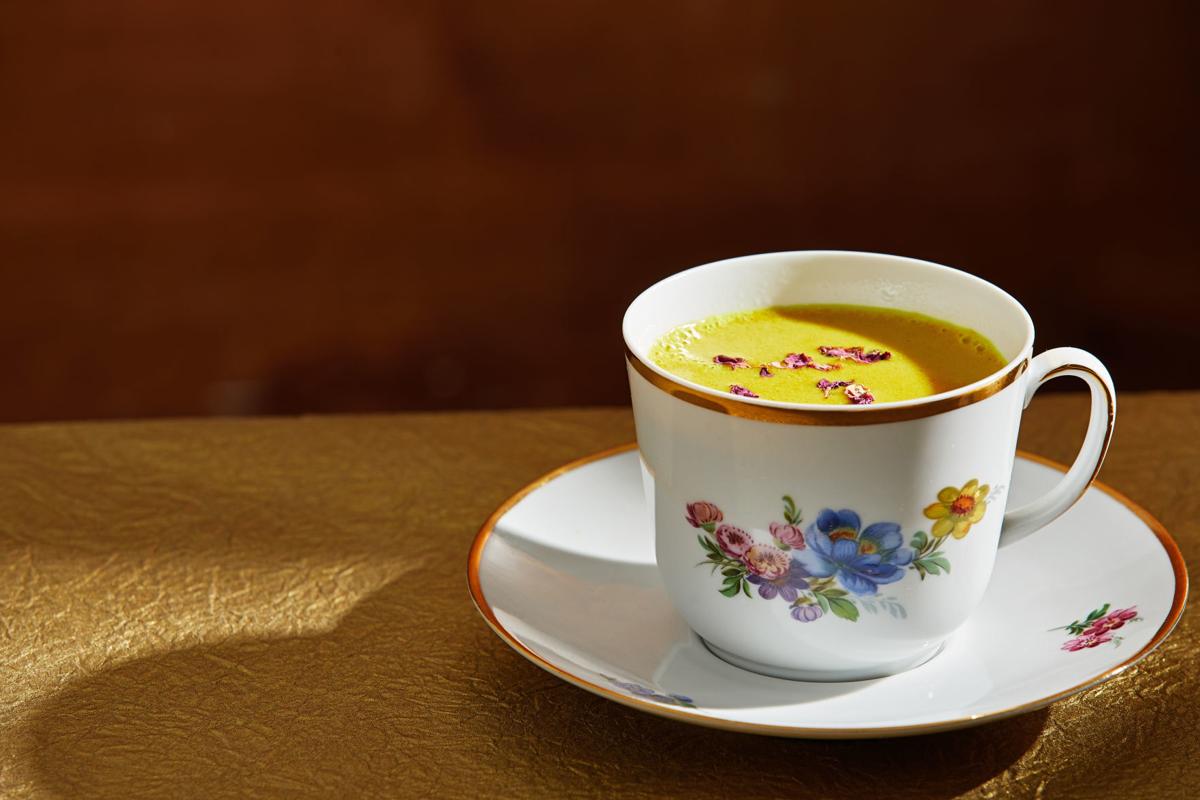 Golden Slumbers. MUST CREDIT: Photo by Tom McCorkle for The Washington Post. 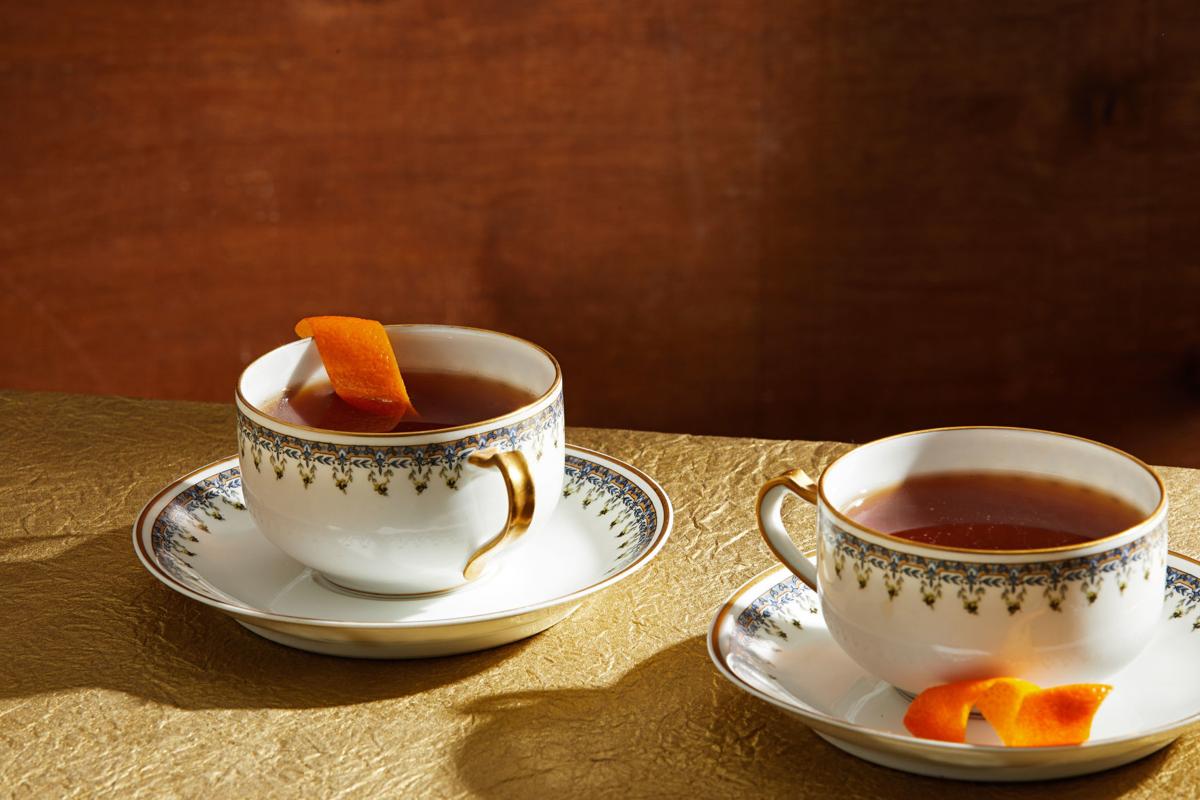 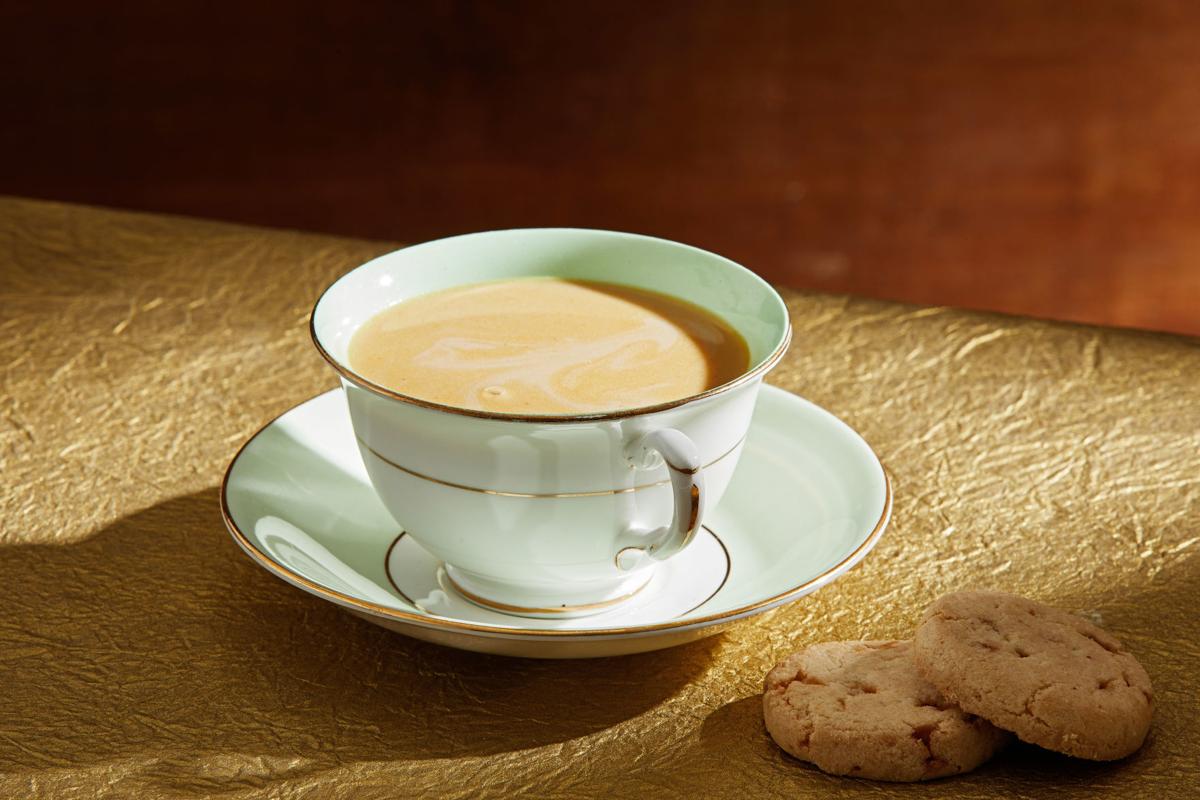 Bourbon Caramel Cozy. MUST CREDIT: Photo by Tom McCorkle for The Washington Post.

Warm winter drinks. MUST CREDIT: Photo by Tom McCorkle for The Washington Post.

Golden Slumbers. MUST CREDIT: Photo by Tom McCorkle for The Washington Post.

Bourbon Caramel Cozy. MUST CREDIT: Photo by Tom McCorkle for The Washington Post.

It's February, and while the temperature's been up and down in the D.C. area, right now as I write, it's 63 degrees out. And it's not just here: A friend is in a part of Montana where it's 62. Sure, some of us are getting season-typical temps, but many who would love to be sitting on couches, looking out at falling snow as we wrap our hands, Baby Yoda-like, around a mug of something steaming, are instead going for uneasy walks in light sweaters and contemplating where we might move to avoid the worst of the climate apocalypse - or at least continue to experience seasons.

February has traditionally been the month of the Great Freeze in Washington, when the winter doubles down. Growing up, it was a time of listening to the radio for school cancellations and tobogganing on the hill behind our house, returning flushed from play. We'd shed our awkward puffy jackets just outside the back door and steam would rise from our bodies, as though we'd been enclosed in a greenhouse. Inside, there would be milk warming on the stove, our mom stirring in glorps of Hershey's syrup and sprinkling mini-marshmallows into our mugs.

It is memories like this one that I stand in whenever I tell people I love winter. It recently occurred to me that what I most loved about the cold weather was how warm it was.

Exactly how climate change will impact drinking is one of the least critical concerns around our warming planet, but as someone who thinks about drinks, I have considered it. Climate change is already impacting viniculture; likewise, the zones where plants - from corn to rye to agave and sugar cane - used to make spirits will shift over time. What we want to drink will probably change, too. Who'll want to sip classic winter drinks, such as hot chocolate, hearty stouts, Black Manhattans, when it's 80 degrees out? If the Thwaites Glacier continues on its current melting path, a whole lot of people will end up with beachfront property they hadn't expected. When Greenland becomes a new summer surfing destination, will reindeer-moss daiquiris become the local beach drink?

Perhaps I need to be more positive. Cold places, after all, still exist. That probably won't change for generations. Even then, it's possible to imagine our descendants enjoying a hot toddy at a future mixology haven in space, where it is always cold. The Star Bar's most sought-after seats would allow guests to look back on the once-blue planet where their ancestors lived. They could imagine what's beyond the haze that surrounds that planet now, recall the stories they've read in old Earth books set in mysterious places like Miami and Kingston, Jamaica. And just as bartenders now highlight pre-Prohibition cocktails made with vintage spirits, the android mixologist may suggest guests try the house Nostalgia Special, featuring one of the last rums brought up from Earth. It will be billed as tasting exactly like what people would have had in Cuba 150 years earlier - as close as they can get, anyway, using sucralose and reconstituted lime.

As we wait and see what happens in the future (and, call me crazy, do what we can to stave off such developments), it is difficult to get in the mood for hot drinks in places where it's a few degrees from shorts weather outside. But I'm taking the temperature drops as I can get them. On a recent cold-ish weekend, I spent an hour whipping up batches of warm sipping drinks, all of which can be made with and without alcohol, by the way, for those of you who've decided to extend your Dry January. If you're in a cold spot - or just in denial and trying to drink accordingly - you might give these a try. And here are some tips for making winter warmers.

- Stir it up, low and slow. Obviously I wasn't making boozy hot drinks when I was a kid, but my first oblivious encounter with food science probably came from eyeballing that film that forms when a neglected pan of hot chocolate sits over heat long enough for the proteins to coagulate. I didn't know the technical term for it, lactoderm, which means "milk skin," or more practically, "gross." If you're using dairy in a drink, keep the temperature low and stir it regularly. This applies also if you're using a plant-based milk, some of which thicken or change texture if they boil.

- Heat changes flavor - for better and worse. If you're making a drink that involves infusing with spices, toasting them before they go into the liquid can help bring out their flavors (and also smells great). Do this over low to medium heat, and stay close; you'll want to move the spices around the pan so they don't scorch. When they start smelling good, you've reached the right spot.

On the flip side, heat also can bring out unpleasant bitter flavors in citrus juices and change the flavors of other fruits, making them more concentrated and jammy. That can work just fine in a drink, but you should keep it in mind; if you're making a warm drink that contains fresh citrus, you want that citrus to spend as little time over the heat as possible, so add it last and get it off the heat quickly. Likewise, cooking a wine (including vermouth or sherry) will alter its flavors - one of the many reasons not to waste a great bottle of wine in a cocktail, especially if it's going to be warmed.

- Heat does not mean bye-bye booze. Contrary to what you may have heard, applying heat to a drink doesn't mean all the alcohol will cook off. Alcohol does have a lower boiling point than water, and if you heat, say, a pot of spiced apple cider with rum in it on the stove to 173 degrees Fahrenheit (the boiling point of ethanol), as much as 60% may cook off. But if you instead heat the cider to a simmer, add the rum and let it reheat only briefly, virtually all of the booze will still be in the drink. Consume accordingly.

- Do not burn the house down. Alcohol fumes can catch on fire - beers, wines and low-ABV liqueurs aren't dangerous on this front, but anything over 40% ABV has the potential to light up. Working over a gas stove, I'm particularly mindful about this. While it's unlikely to flame up, be safe: Don't heat up a pan and then pour straight hard liquor into it. In all the accompanying recipes, you should warm up the nonalcoholic base of the drink first, then add the booze, resulting in a much lower-proof mixture getting rewarmed briefly before service.

Snuggle up with this on a cold winter night. Its caramel creaminess is elevated by the heat of chipotle pepper and a lightly bitter back note from Italian amaro. We used Sfumato Rabarbaro for the amaro, which has a smoky flavor that further boosts the smoky pepper, but Averna, Ramazzotti or Nonino will also work. If you don't have smoked salt, use kosher salt.

You can also opt to leave out the bourbon and amaro for a spicy nonalcoholic dessert drink; if you do that, this makes 2 servings.

In a small saucepan over low heat, combine the milk, brown sugar, chipotle powder, vanilla and salt. Bring the mixture to a simmer and whisk to dissolve the sugar.

Add the bourbon and amaro, stir to combine, and let warm an additional 1 minute or so. Remove from the heat, ladle into teacups and serve.

The tisane base of this drink incorporates juniper and citrus, classic gin botanicals, into a warm, tealike brew. Add London dry gin and Angostura bitters, and you have a delicate drink rich with citrus and spice. (Note: You can omit the gin for a nonalcoholic sip, simply serving the tisane with the bitters.)

Storage Notes: The tisane can be refrigerated for up to 1 week.

Peel of 1 grapefruit, stripped with a peeler, avoiding the white pith

Peel of 1 navel orange, stripped with a peeler, avoiding the white pith

Add the water, then the citrus peels, twisting them over the surface of the water to express the oils.

Add the sugar and bring the mixture to a boil. Reduce the heat to low and simmer to infuse, about 5 minutes. Remove from the heat and let steep for 10 minutes. Strain out (and discard) the solids and reserve the liquid. The yield is about 3 3/4 cups (enough for 6 to 7 drinks).

Make the drinks: In a small saucepan over medium-low heat, bring the tisane to a simmer. Add the gin and let rewarm for 30 seconds, then divide equally between two teacups. Add 2 dashes bitters to each drink, then garnish with the orange peel - twisted over the surface of each drink, then dropped in - stir and serve.

Ingredients are too variable for a meaningful analysis.

"Golden milk," the color of which comes from turmeric, has a long history in Southeast Asian traditional medicine. The spice's warm color and mild flavor make a comforting base for this drink. Leave the rum out for a nonalcoholic warmer.

Storage Notes: The turmeric syrup can be refrigerated for up to 1 week.

FOR THE TURMERIC SYRUP

Make the turmeric syrup: In a small saucepan over medium heat, toast the cinnamon stick, peppercorns and cloves until fragrant, about 3 minutes, stirring occasionally to ensure the spices don't scorch.

Stir to combine, then bring to a boil for 30 seconds.

Remove from the heat, let cool enough to handle safely, then strain out (and discard) the solids through a fine-mesh strainer, reserving the liquid. You will have about 1 3/4 cups of thin, bright gold syrup, which can be cooled and stored in the refrigerator.

Make the drink: In a small saucepan over medium-low heat, bring the milk, syrup and rum to a simmer, stirring occasionally. Ladle (or pour carefully) into a teacup, and garnish with a pinch of pepper and/or rose petals, if using.