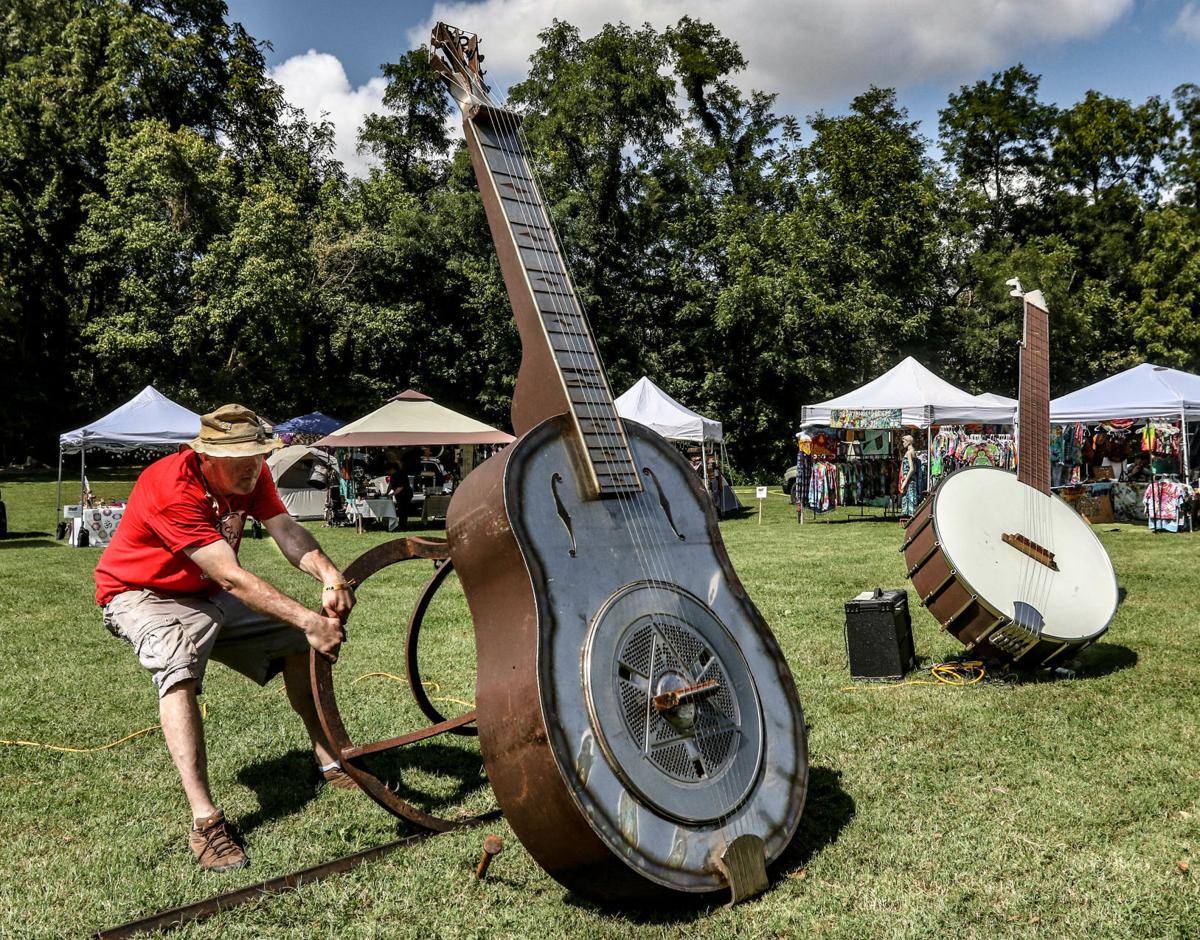 David Sakalavskas with Heavy Metal String Works out of Michigan pulls an oversized, working dobro in place next to a large banjo in the vendor area at ROMP Fest on Thursday at Yellow Creek Park. The instruments are in working order and can be played by concert-goers. 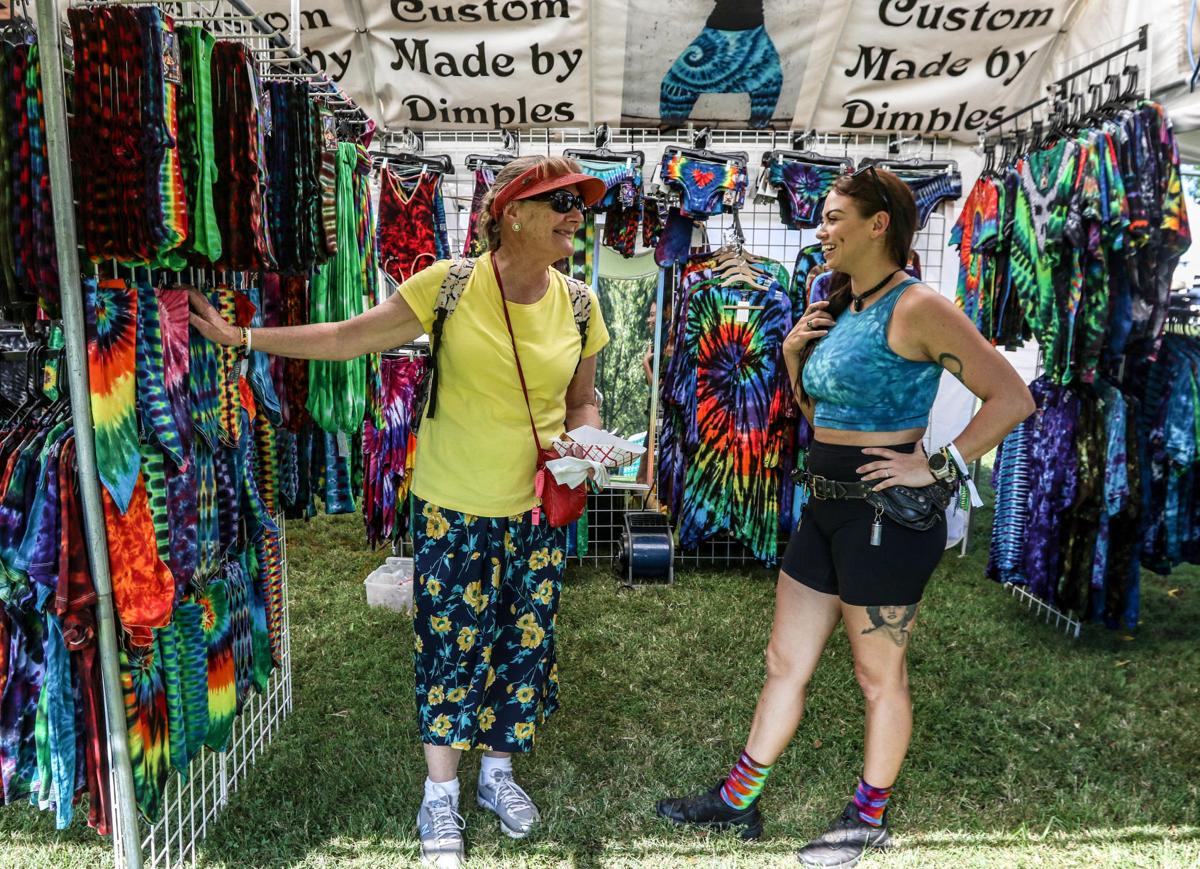 Craft vendor Dimples, owner of Dimples Dyes, right, from Springfield, Illinois, talks with Becky Alke from Snohomish, Washington, in her shop full of tie-dyed clothing and accessories on Thursday during the festival at Yellow Creek Park. 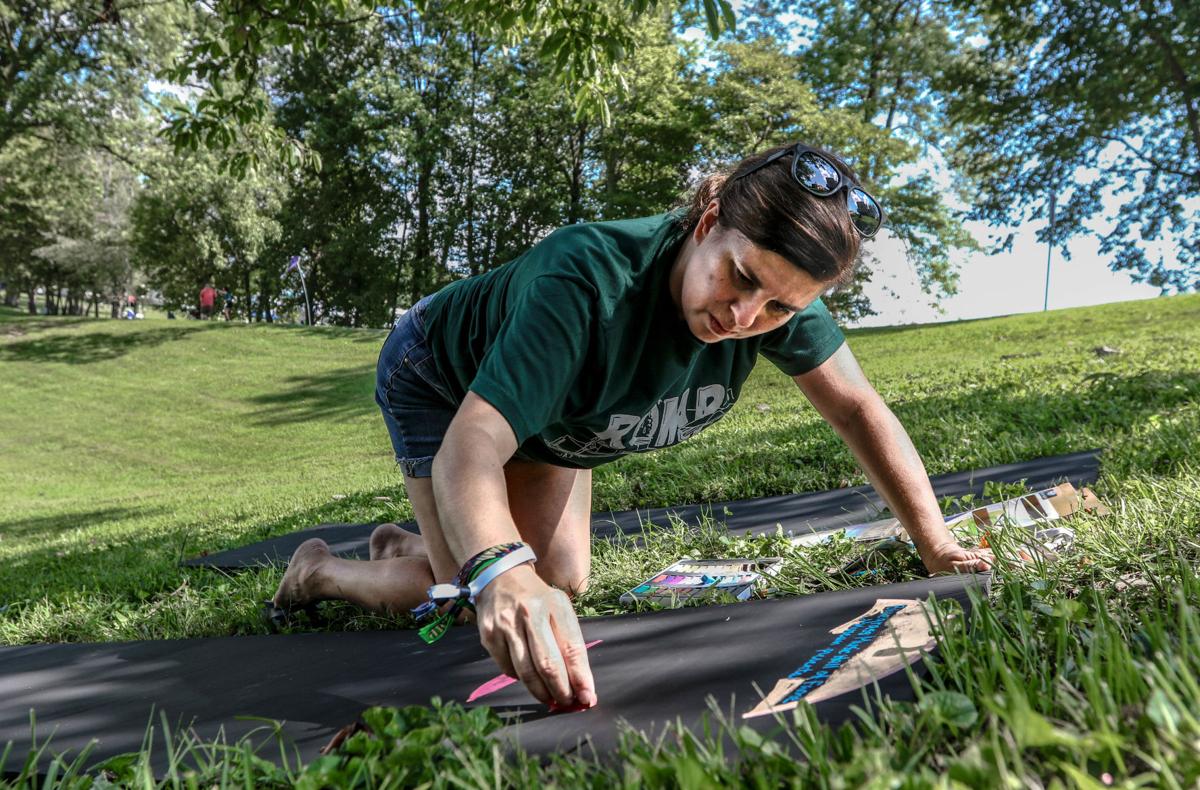 Stephanie Peckenpaugh creates a menu board for The Pizza Revolution, a brick oven pizza shop set up at ROMP Fest on Thursday at Yellow Creek Park. Peckenpaugh has been selling pizza at the food court at the festival since 2014. 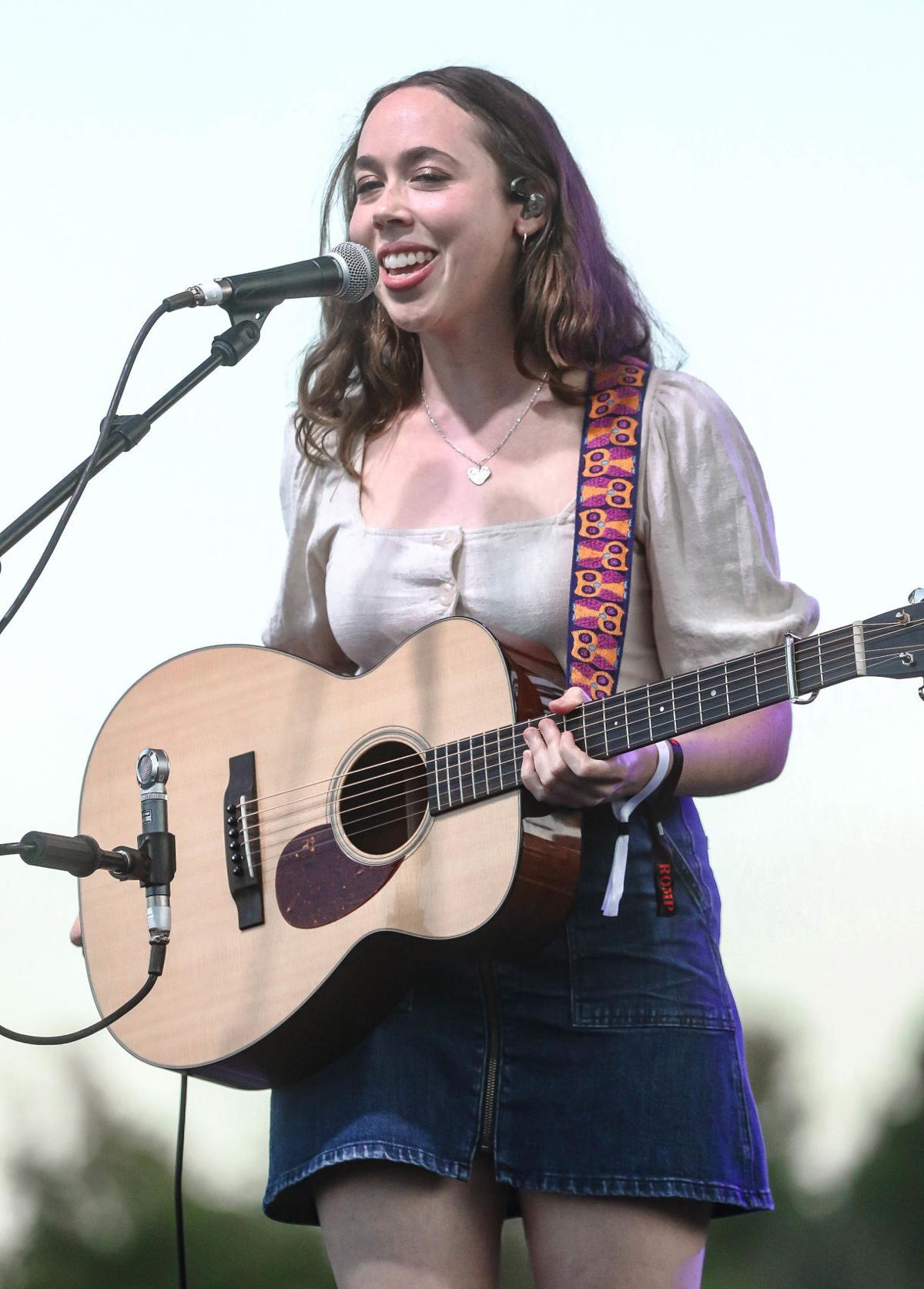 David Sakalavskas with Heavy Metal String Works out of Michigan pulls an oversized, working dobro in place next to a large banjo in the vendor area at ROMP Fest on Thursday at Yellow Creek Park. The instruments are in working order and can be played by concert-goers.

Craft vendor Dimples, owner of Dimples Dyes, right, from Springfield, Illinois, talks with Becky Alke from Snohomish, Washington, in her shop full of tie-dyed clothing and accessories on Thursday during the festival at Yellow Creek Park.

Stephanie Peckenpaugh creates a menu board for The Pizza Revolution, a brick oven pizza shop set up at ROMP Fest on Thursday at Yellow Creek Park. Peckenpaugh has been selling pizza at the food court at the festival since 2014.

The second of the four-day festival featured performances by Wolfpen Branch, Sister Sadie, Sarah Jarosz, Robert Earl Keen, and The Lil Smokies on the main stage with Wolfpen Branch doing a reprise performance and The Josephines closing out the night at the Jagoe Homes After Party Stage.

But the music was not the only part of the event that took center stage.

“Both (the) food and craft vendors (are) part of the whole festival experience,” said Carly Smith, marketing director for the festival and the Bluegrass Music Hall of Fame & Museum.

“A lot of people are here for four days and maybe they don’t want to cook every single meal at their campsite,” Smith said. “We purposely strive to bring vendors that are unique from each other. ...It’s really trying to provide some variety because people will try different things every day.”

Fistful of Tacos from New Albany, Indiana debuted their first year at the event, offering a wide selection of tacos, salads, and burritos.

“Everybody’s had a taco but we add a little flair,” said Hayden Simon, general manager for bookings and operations. “We feel like we have a taco for everybody.”

Simon is originally from Owensboro and has been wanting to bring his food truck to ROMP for the past 3 ½ years.

Though Simon travels around for many different types of events to serve and sell food, he said that the festival circuit is what he looks forward to.

“The festivals are probably the most fun events that we do on the food truck,” Simon said. “You get to go somewhere and serve people for two or three days. Meeting other vendors is one of the best parts about it. Trading food, getting to know other people and their setups.”

The art and crafts vendors set up at Vendor’s Row, giving an opportunity for creators to display their own original artwork, designs and jewelry.

“We like to think of ROMP as an arts festival, in a way,” Smith said. “So we love the arts and crafts vendors that can present their wares and basically (it’s) a way to showcase their artistry as well. We try to keep it to all unique and different things.”

One of the 16 arts and crafts booths for this year includes Dimples’ Dyes, a hand dyed tie-dye art and clothing company hailing from Springfield, Illinois. The owner and operator, who requested to be called Dimples, has been attending festivals across the country for the last eight years.

“I get to work with people who are all really happy and on vacation,” Dimples said. “My work environment is a party and I love that.”

Dimples began her business in 2002 trying to save an animal’s life.

“I was raising money to save a cat,” Dimples said. “I started making tie-dyes for sale before that but I didn’t really find it enjoyable because it was hard for me to expect people to give me their money for something I enjoyed so much. But, when I had the cat to raise money for, I was like, ‘Buy this tie-dye and help me save this cat!’ ”

Sarah Fightmaster of Gypsy Wings, a wellness business that sells crystals and essential oils from Paris, is setting up shop at ROMP for the first time with her 5-year-old son Tommy Bensberg.

“I try to do things that help balance body, mind, and spirit,” Fightmaster said. “I do stained-glass work and I think creativity and being creative is really good for us.”

Fightmaster put her efforts into the company just one year ago, giving up her day job as a public defender and traveling around the commonwealth to festivals as a businesswoman rather than an attendee.

“I decided I liked going to music festivals better than going to the courtroom,” Fightmaster said.

While vendors have many festivals to choose from, ROMP typically appeals to them the most.

“I just really love the vibe here,” Dimples said. “This is my crowd; these are my people. I like family festivals where there’s lots of kids, lots of dogs …”

Smith said that the event typically receives about 100 to 150 food vendor applications, which is then narrowed down by vendors that performed well in previous years and ones that ranked as crowd favorites.

“We always do a festival survey after the event and one of those questions is ranking the food vendors,” Smith said. “That helps us keep it to what are people are gonna like to have.”

Smith said that ROMP had to decrease vendor slots due to COVID, albeit very minor.

“We still want to present ROMP the way ROMP is,” Smith said. “We were very conscious of making sure the vendors that are here are going to make money for the weekend. They’re putting in the effort as well to be here. We want to make sure they’re successful.”

They were involved in a dog fighting ring?! You'll never guess that these stars have been under house arrest

She was declared bankrupt twice!? These stars lost their fortunes