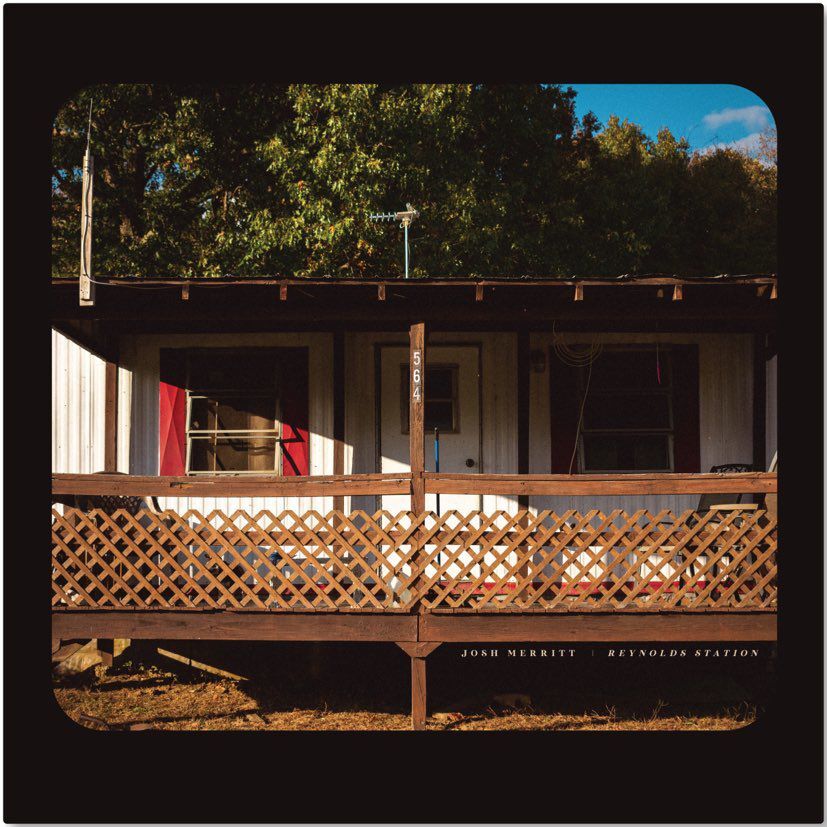 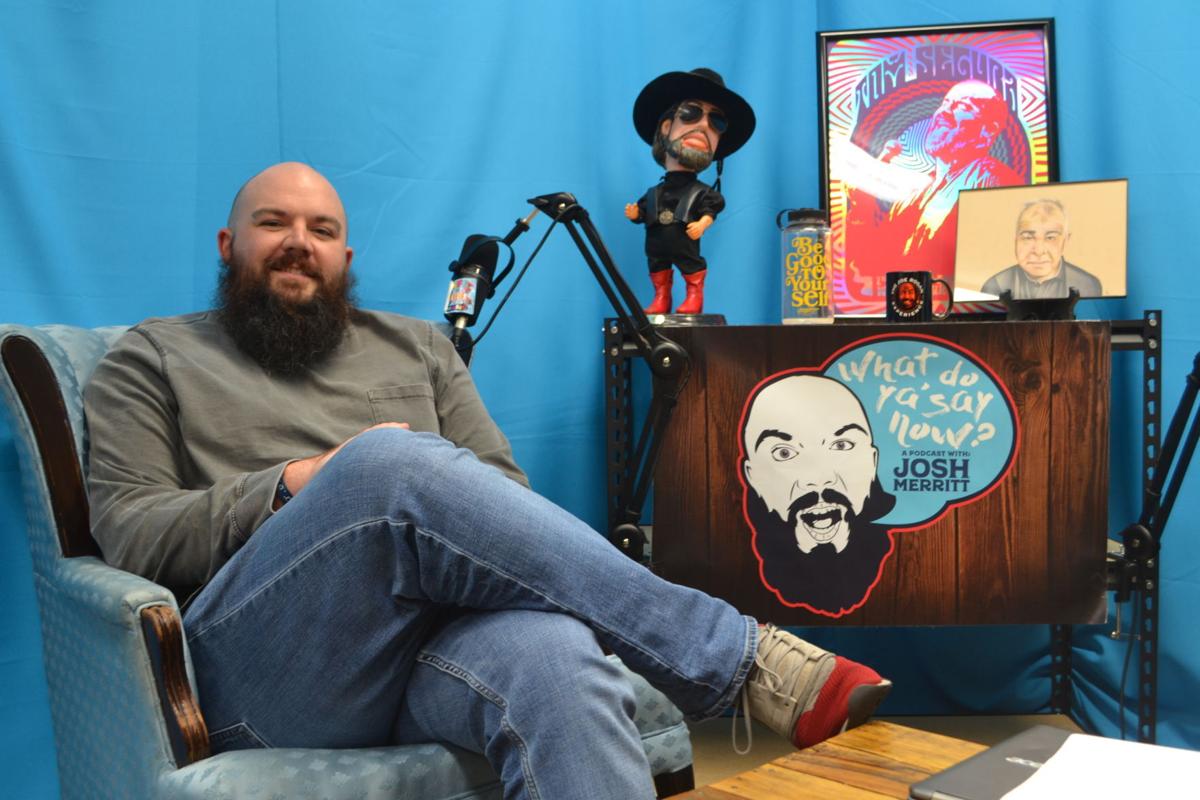 Owensboro musician Josh Merritt sits Wednesday at his studio for his podcast “What Do Ya’ Say Now.”

Owensboro musician Josh Merritt sits Wednesday at his studio for his podcast “What Do Ya’ Say Now.”

Owensboro musician Josh Merritt knew that he was going to fall into a family tradition.

But he didn’t predict the success that would come with it.

His 2020 debut album “Reynolds Station” received high praises from the bimonthly American Songwriter and Glide Magazine, followed by sharing the stage with Nashville country rapper Upchurch, fulfilling a successful 10-day tour with musician and friend Brad Lemmons, and revitalizing his podcast “What Do Ya’ Say Now?”

With his father being a part of a musical family, Merritt, 31, became enamored with music after visiting one of his uncle Curtis’ house jams.

“My uncle Curtis played the upright bass in this bluegrass setup. It was the coolest instrument ever.” Merritt said. “I went to him afterwards and was like, ‘Hey, I like to learn how to play one of those. Can you teach me sometime?’ ”

Uncle Curtis ended up giving the upright bass to Merritt, which became Merritt’s first dive into playing an instrument.

Merritt eventually transitioned into bass guitar but realized it wasn’t ideal for him to reach his goal of being in the spotlight as a vocalist and songwriter like George Strait and Travis Tritt.

“I can remember venturing into singing (at 14 or 15),” Merritt said. “I’ve always been a singer; I’ve always sang. I literally started to learn the guitar just to back myself up as a singer.”

Merritt eventually connected with his cousin to become part of their garage band Ground Zero before forming Josh Merritt Phantom 63 and The Green Merritt Project with local musician Jarred Green.

But Merritt played it smart. Even though he wanted to pursue music full-time, Merritt was employed as a full-time service technician with Acme Plumbing & Heating while also pursuing a criminal justice degree at Daymar College.

The possibility of going into a career in law enforcement was right at Merritt’s fingertips until he was at a crossroads after being offered an opening slot in the Florida Keys for the country group Brasher/Bogue’s tour in 2011, the same week he was scheduled to have an interview with the Owensboro Police Department.

“That was the moment that I decided that I was going to be a musician and that I (was) absolutely, unapologetically, was going to do it,” Merritt said.

While Merritt knew his calling, it would take him three more years to finally take the plunge in order to make sure he was financially secure. On Sept. 22, 2014, Merritt finally jumped.

Merritt found the move “exhilarating” and continued to play out while learning in the inner workings of the music business.

But at the six month mark, Merritt unexpectedly found out that his partner was going to have a baby girl. Merritt had thoughts of going back to a normal nine-to-five but wanted to teach his child something early on.

“I don’t want to have a conversation with my daughter in 10-15 years from now (where) she says, ‘Dad, look at all these posters from these shows. Why didn’t you do that?’ ” Merritt said, “(And I would say), ‘Well, because you came along.’ And I don’t ever want her to think that she can’t follow her dreams either. I don’t want her to ever think my lifestyle is not doable.”

Though Merritt is keen on his music, he fell into a job that he loves even more.

Merritt hustled throughout the years becoming established in Owensboro and Evansville, Indiana, drawing crowds at The Flora-Bama Lounge and Package and the Broadway strip in Nashville, and released his first live acoustic record “Live at Songhouse” in 2016.

A chance meeting with former MCA Nashville Records’ artist Shannon Lawson at a friend’s event in 2017 is what got the ball rolling for Merritt’s first full album to begin production in Nashville on Merritt’s own dime, taking three years to have a final product.

“Reynolds Station,” aided by Lawson as in the producer’s chair, Robert Kerns, bassist for Sheryl Crow, Shakey Fowlkes, studio drummer for Kid Rock, and Peter Keys, the keyboardist for Lynyrd Skynyrd, is based around fragments of Merritt’s upbringing — revolving loosely around his mother’s drug addiction and also making Merritt look inward at his own choices that were hidden behind closed doors.

“When I started writing that album and putting it together in 2017, that year was special to me in my own mind for a particular reason,” Merritt said. When I was 8 years old, my brother and I got taken away from my mom because of her drug addiction. …Up to that point, I never held a grudge against my mom. My mom and I had a great relationship. But I guess there was this slight chip on my shoulder … I reached this point … I turned 27 and that was the same age when we were taken away from her.

Merritt ended up previewing the songs for his mother before he went into the studio.

“It was difficult,” Merritt said. “I just took a guitar and I played them for her. I played the ones that I thought, if any of them were to hit a nerve with her in any way, I wanted her to listen to those first and give me her opinion on them before I just put them out there for the world.”

Merritt found the recording and writing process an opportunity to relate to his mother, who recently celebrated 15 years of sobriety, and to see what she was going through at that time while using his first-hand experiences to be able to help people that may be going through similar circumstances.

With now being on the national radar, Merritt is eyeing what’s up ahead for his new fans such as another small tour and more.

“Actually, last night, I was putting songs together for a new record,” Merritt said. “The material’s there; the songs are written.”

Merritt plans to be back in the studio first thing in 2022, moving away from the serious and somber content of his debut.

“The next record is going to be a ‘me’ record,” Merritt said. “I want when people listen to it to get the same feeling they get when they are with me. I hope for it to be a more light hearted record, a more fun record. I’m wanting to have some fun with this one.”

He wasn't handsome enough to play 007? You won't believe the actors that turned down James Bond!

His wife is going to kill him! Stars who have famous crushes