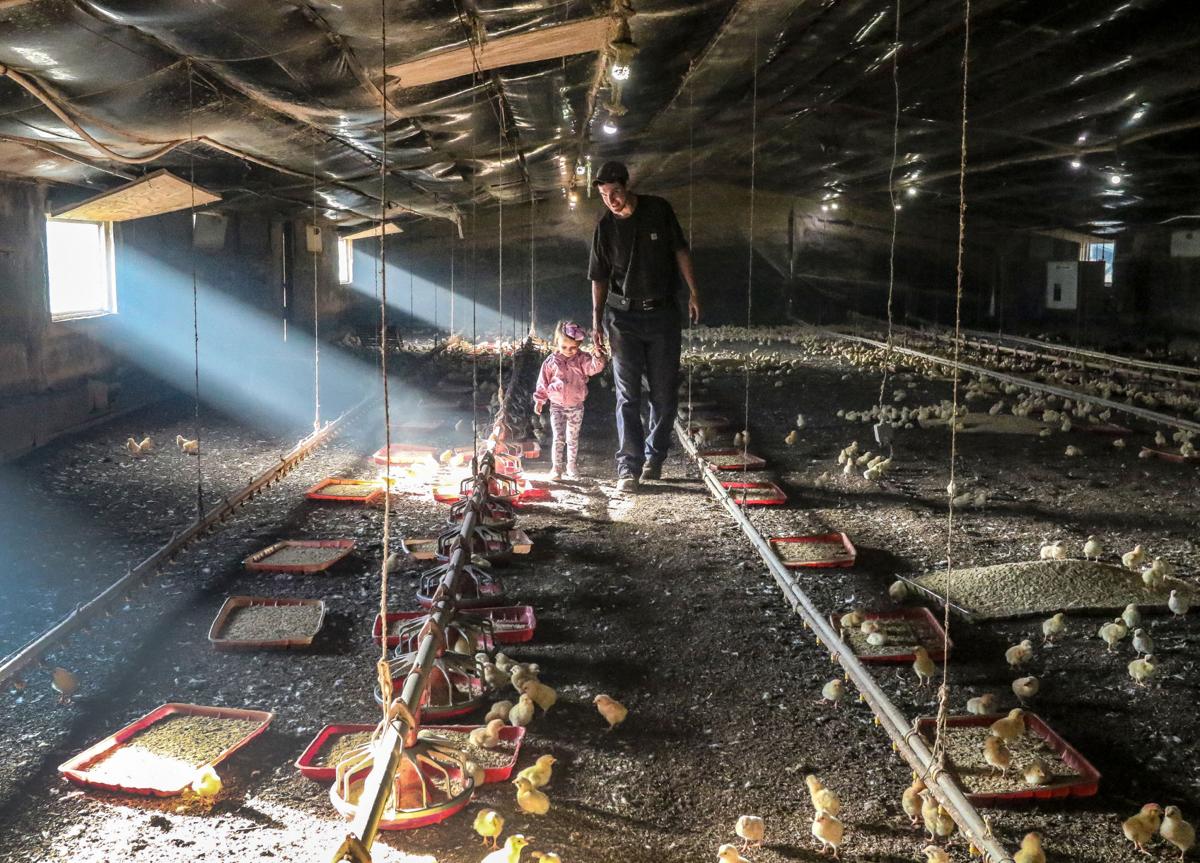 Brian Neltner and his daughter, Ansley, 3, walk one of the chicken houses on the Settleses’ farm that contains day-old chicks Nov. 17 in Stanley. 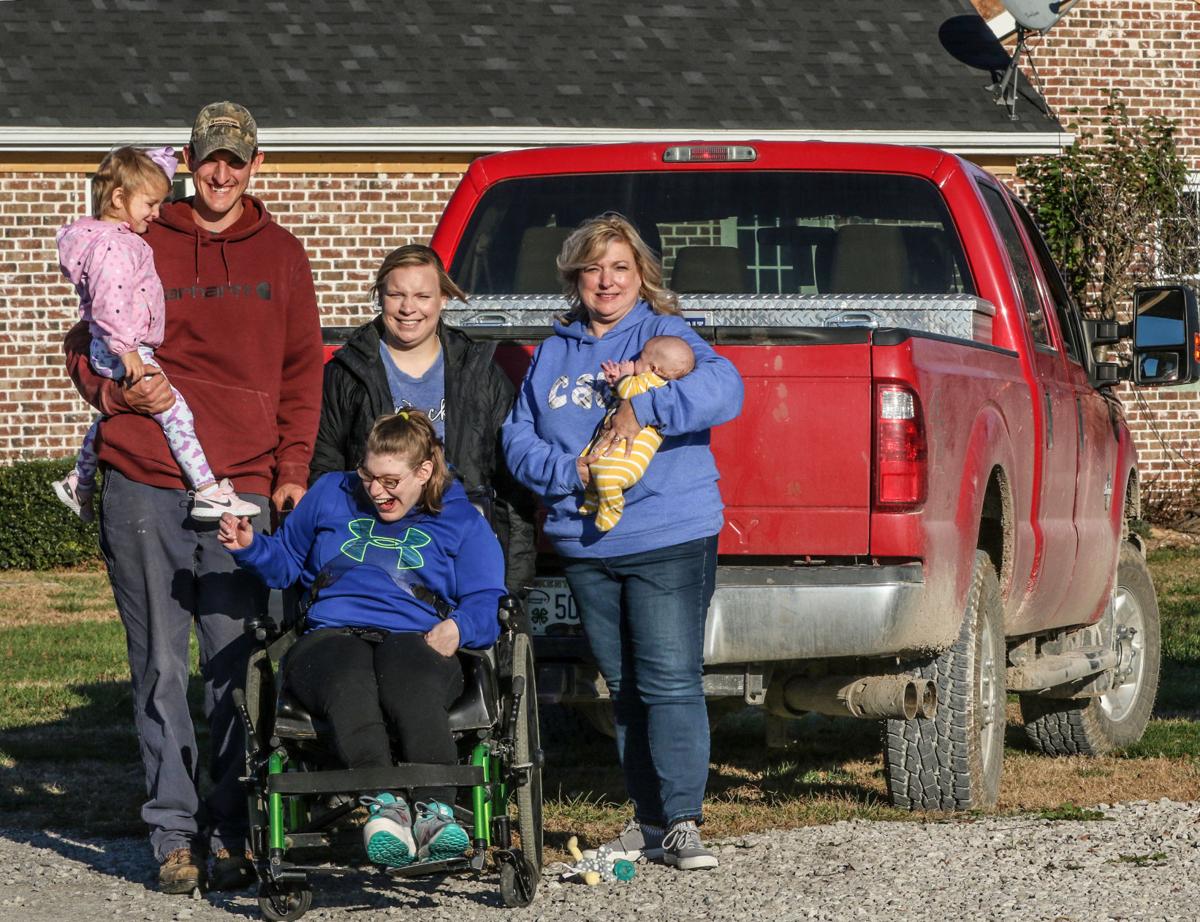 Brian Neltner and his daughter, Ansley, 3, walk one of the chicken houses on the Settleses’ farm that contains day-old chicks Nov. 17 in Stanley.

The community of Stanley is known for its corn, soybean, tobacco and even watermelon growers.

But the Settles family, with their “Settles 3 Chick Farms,” can claim the distinction of being the only poultry producers there.

“We started out with tobacco and grain farming,” Sandy Settles said. “…But we were looking for another enterprise to get into.”

And in 2000, Sandy Settles and her late husband Chris Settles decided to invest in two chicken houses and contract with Perdue Farms.

And from there, the Stanley farm family established what has become a sizable poultry operation on Laketown Road.

With the growth and success of the venture, the Settleses eventually traded in their tobacco patches for poultry.

Sandy Settles said it didn’t take long, after the first two chicken houses, to realize the potential of the business.

“We went to four (chicken houses) about six months later and then we went to eight in 2004,” Sandy Settles said. “We were raising about six to eight acres of tobacco along with the poultry, and when we fully got expanded, then we stopped raising burley but we still have grain.”

For the bulk of the years, the family-run business was mainly a three-person operation with Chris, Sandy and Chris’ father, Jim Settles.

Chris and Jim Settles had the hands-on duties while Sandy Settles managed the paperwork side.

But in August of 2018, the family suffered the loss of Chris Settles who lost his battle with cancer at age 54.

It would be Chris’ daughter, Lauren Neltner, and her husband, Brian Neltner, who would enter the family business to help ensure it kept going. The Neltners came in with plant, soil and animal science degrees from the University of Kentucky.

“We wanted to see the business go forward and I think we were all on the same page with it,” said Sandy Settles about how the family rallied together after Chris Settles passed away. “…And I think it’s worked beautifully.”

Lauren Neltner said her goal was to eventually return to Daviess County and help with the family farm.

However, it happened sooner than she expected with the passing of her father.

“I knew I wanted to live around here and raise my kids here,” Lauren Neltner said. “I guess it worked out the best it could have for the circumstances we were handed.”

Brian Neltner has now assumed the role of managing the family’s chicken houses and the day-to-day operations. Jim Settles, who is now 80, continues to help out as well.

Neltner said the family has placed the chicken houses under the gap farm program, which decreased the number of chickens per house from 24,800 to 19,800.

“It gives the birds a little more space as they get older,” said Neltner, adding that the chickens are raised for 46 days in the houses before they are shipped off to Perdue.

For the most part, the chicken houses are automated with feed and water controls and they’ve been upgraded with computer software that alerts Neltner via his cell phone when the temperature becomes too hot or cold inside a specific house.

And when the family receives a flock from the hatcheries, they come in as chicks and leave at around 6.3 pounds, which is the target weight.

“Brian puts a lot of exact science into what he does every day,” Sandy Settles said. “As the birds advance in age, there is a certain formula that goes into them; there’s a certain temperature every day that they have to have. There are lot of adjustments that have to be made every day.”

For Sandy Settles, she is grateful for the legacy that her late husband left behind and that she has her family there supporting her.

“It’s not every day that you get to make a living and do something with your family,” said Sandy Settles, who has two additional adult daughters — Kelsey and Melissa. “…Chris wanted to build something for his kids and I think he did a good job of building something for his family.”

Joe Biden has a message for coal workers

Survivor sounds alarm over 'echoes of the Holocaust'