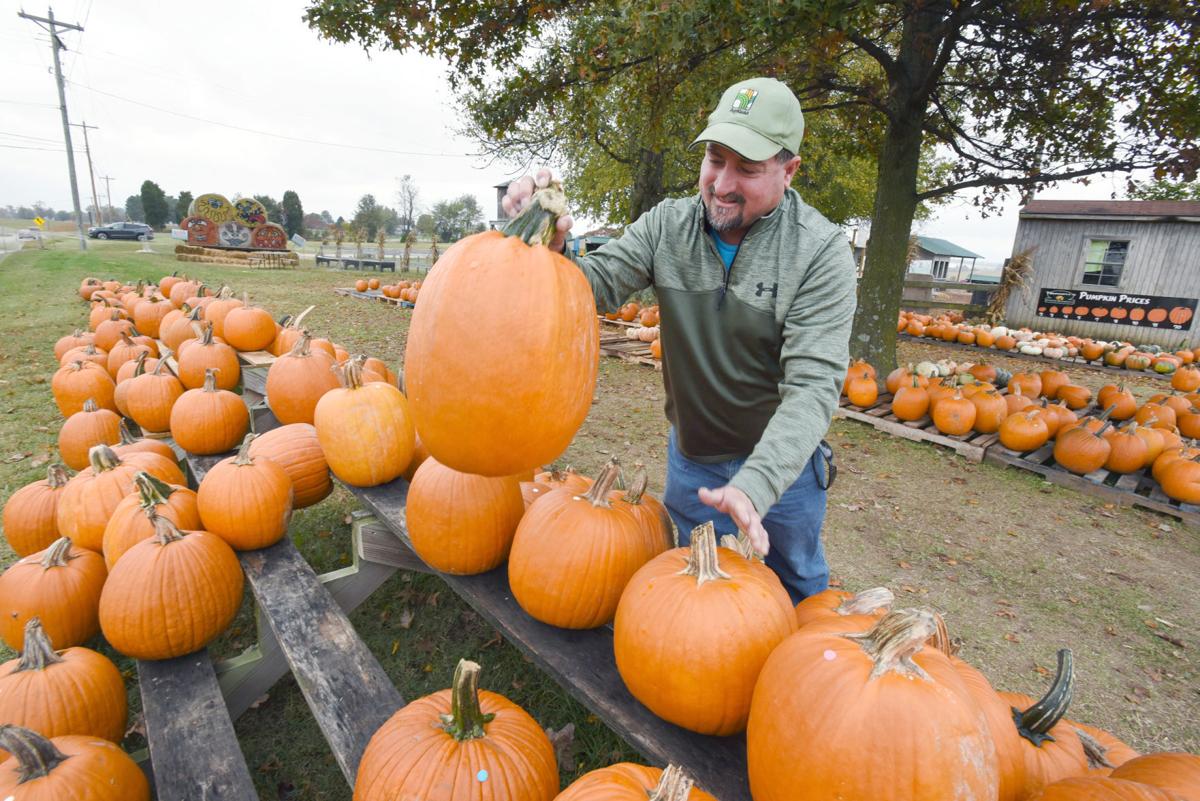 Kevin Trunnell picks up a large pumpkin at Trunnell’s Family Fun Acre and Farm Market on Monday in Utica. 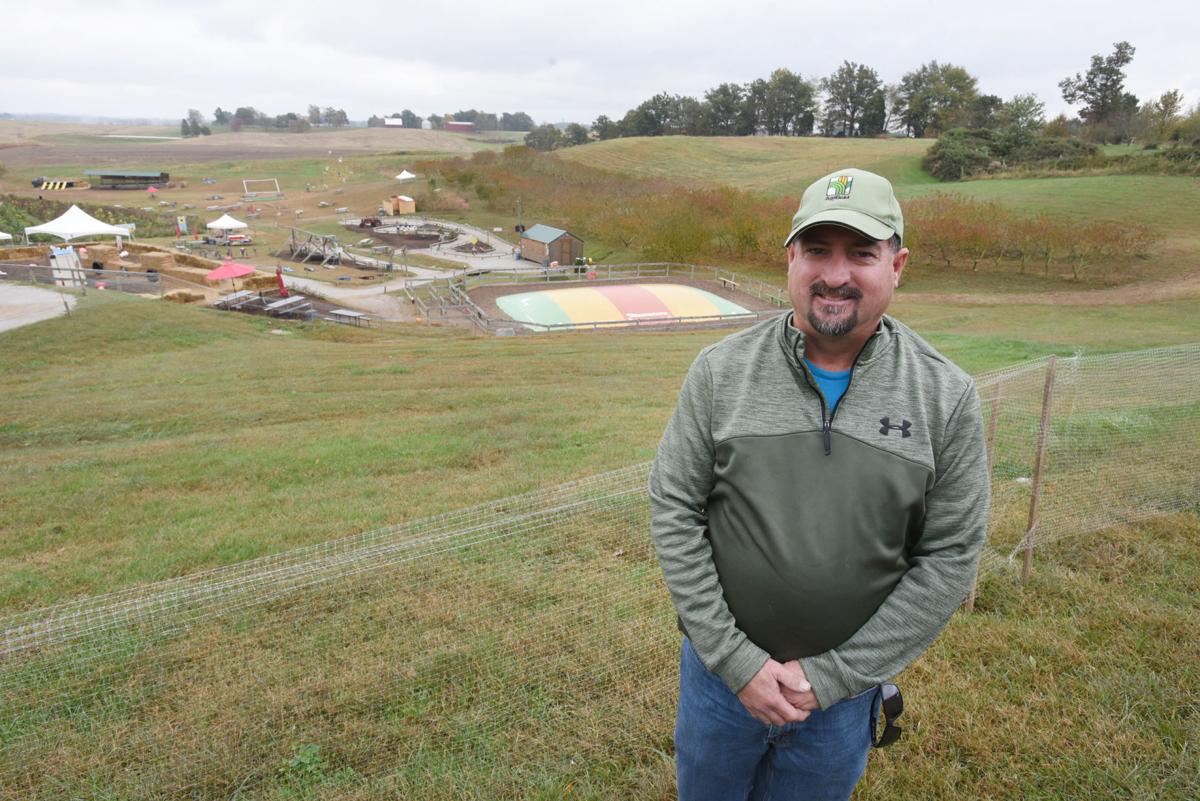 Kevin Trunnell stands on the hill overlooking the Trunnell’s Family Fun Acre on Monday at Trunnell’s Farm Market in Utica.

Kevin Trunnell picks up a large pumpkin at Trunnell’s Family Fun Acre and Farm Market on Monday in Utica.

Kevin Trunnell stands on the hill overlooking the Trunnell’s Family Fun Acre on Monday at Trunnell’s Farm Market in Utica.

Thirty-one years later, he still helps in the planting process but then switches to his other venture for the summer and fall seasons.

Across the highway from his family’s homestead is a separate thriving agribusiness — Trunnell’s Farm Market, 9255 U.S. 431 — that Trunnell never anticipated.

The Utica-based market is a 2,500 square-foot store stocked with goods such as vegetables, fruits, jellies, sauces and an array of homemade fudge flavors.

On the outside, pumpkins currently cover the 1,500 square-foot porch space.

And behind the market is a 15-acre, farm-themed play area that was once pasture for raising cattle.

It’s a successful venture that has blossomed from selling sweet corn out of a pickup-truck bed three decades ago.

“In 1989, I grew my first sweet corn crop to sell to the public,” said Trunnell, who was 17 at the time. “When I did that, we just picked it and parked the pickup truck in my parents’ front yard. …It was just for a little cash in the summer because farming full-time I wasn’t getting a weekly paycheck.”

The next year Trunnell established a small vegetable stand across the highway next to a barn.

“It was a table and a money box; we just sold produce based on the honor system,” Trunnell said.

Although the produce stand became a source of supplemental income, Trunnell made a discovery in 2000 that would further change his trajectory.

Until then, Trunnell said the roadside market would close at the end of August.

“We grew our first pumpkin crop that year and that let us stay open all the way through October,” Trunnell said. “We actually sold more dollars worth of pumpkins that year than we did vegetables. That’s when I realized this could be a real business of its own.”

In 2006, Trunnell had plans to renovate the old barn into an indoor market.

However, a windstorm leveled the barn that same year.

“At first, I thought this was devastating; what am I going to do now? All my plans were ruined,” Trunnell said. “But it was actually a blessing because we had a blank slate; we could build something from scratch and have it the way we wanted to make this a great business.”

In the fall of 2007, construction began on Trunnell’s Farm Market. It opened in June 2008.

Trunnell, along with his wife, Julie, have grown and adapted the business over the years.

As the business grew, the Trunnells realized they needed to expand but the market’s building wasn’t designed with any future additions in mind.

“When we first built it, we were like, ‘Oh my gosh, what are we going to fit into all of this space?’ ” Trunnell said. “And within two years, we were like, “This is too small; we need something bigger.’ ”

The Trunnells would open another location inside Towne Square Mall to meet the need for more space.

But in August 2016, they left the mall in favor of opening a sister business — Trunnell’s Farm Market & Gourmet Deli, 4399 Springhill Drive, just off Kentucky 54.

The Kentucky 54 location sells the same farm-fresh goods as the Utica one, but has added soups, signature sandwiches and salads to the menu.

“Wherever you see us, you get the same feel; the same look,” Trunnell said. “…Every guest should have the same experience no matter what day or what hour they come.”

For the past month, Trunnels’ Utica location has been hosting its Family Fun Acre, which features 30-plus attractions such as a corn maze, a jumbo jumping pillow, the Grain Train and a pedal tractor track for children and adults. Two food ordering stations are also available on the site.

The Family Fun Acre will close Nov. 6 and the transition will begin for the Thanksgiving and Christmas holidays.

Trunnell said the COVID-19 pandemic has affected the Utica market by mainly losing the educational tours.

In previous years, Trunnell said the market was open at 10 a.m. but the 15-acre activity area was generally closed to the public until noon Tuesday through Friday to accommodate the schoolchildren.

“Knowing what was going to take place this year with losing all those (school) tours, we decided to open everything up seven days a week and opening at 10 a.m. every day — except Sundays from noon to 7,” Trunnell said. “…It’s worked; the public came.”

For Trunnell, the market side of the farm business has gone beyond anything he ever imagined.

Trunnell said the plan is to always be thinking of ways to add and improve upon the business.

“I never dreamed that this would happen,” Trunnell said. “That wasn’t my original plan to build the market or to do the agritourism. It’s just been amazing.”

This mystery object was found in the Utah desert

Dow crosses 30,000 mark for the first time ever