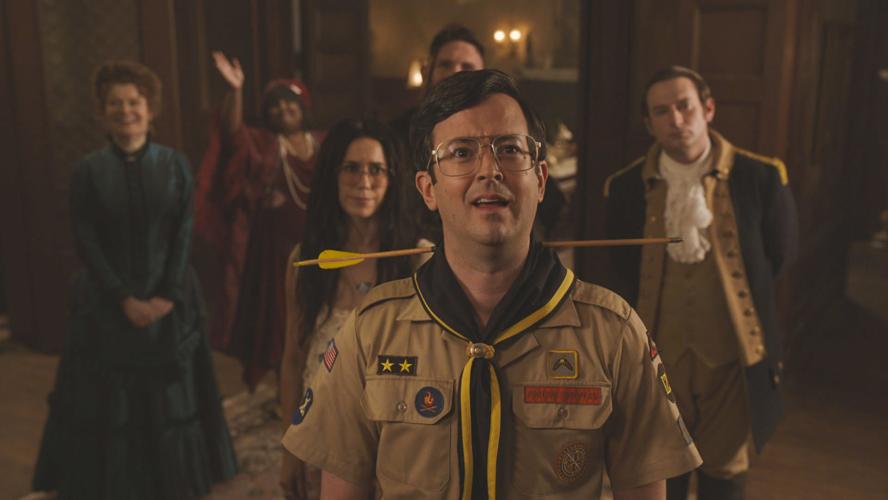 Richie Moriarty, foreground, with some of the cast of CBS’s “Ghosts,” plays deceased scout troop leader Pete in the quirky sitcom. 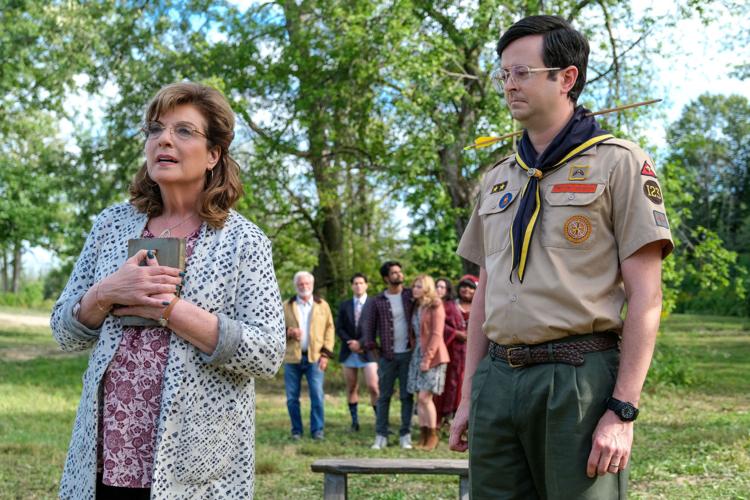 Caroline Aaron, left, as Carol, with Richie Moriarty as Pete in the episode “Pete’s Wife.” MUST CREDIT: Photo by Bertrand Calmeau/CBS

Richie Moriarty, foreground, with some of the cast of CBS’s “Ghosts,” plays deceased scout troop leader Pete in the quirky sitcom.

Caroline Aaron, left, as Carol, with Richie Moriarty as Pete in the episode “Pete’s Wife.” MUST CREDIT: Photo by Bertrand Calmeau/CBS

The scene, circa 1987: Actor Richie Moriarty is standing onstage with a stuffed dog puppet in his hand at his school talent show. The 6-year-old gives a quick introduction: “Hi, my name’s Richie, and this is my talking dog. His name is Troubles. My mom thinks he doesn’t talk, but I think he does.” Then, Moriarty stumbles over his first joke, a pun intended to sub out “roof” for “ruff.”

From there, Moriarty fires off joke after joke, both his and Trouble’s voice higher and higher pitched until he tells one of his final jokes in an almost unintelligible pipsqueak: “Yesterday, I saw a new ad for a new soap that’s called Lost. So next time your mom goes to the store, tell her to get Lost!”

Decades later, Moriarty, now 41, is co-starring on the CBS comedy “Ghosts” but still recalls his ventriloquist stand-up routine with clarity and laughter. “The audience is laughing because they legitimately do not understand a word I’m saying,” says Moriarty over a recent Zoom call. (When he posted a video of the performance on YouTube, he added subtitles.)

This was his first foray into performance after moving to Rockville, Md., at age 5, and though he has never really done stand-up again, he remembers that flicker of joy when hearing an audience respond to his jokes in real time.

His love of performance has led to an acting career, dabbling in a little bit of everything — improv, commercials, voice-over work — before landing a role as Pete on the CBS comedy “Ghosts.”

Originally based on the BBC series of the same name, “Ghosts,” which premiered in October, is about a group of spirits who all apparently met their corporeal end at a wooded country estate, the mansion that serves as their main haunt. They include a hippie mauled by a bear, a pants-less hedge-funder, a fastidious Viking, a gay Revolutionary patriot, a vivacious ‘20s jazz singer and a Victorian-era doyenne whose family originally owned the property.

And there’s Moriarty’s Pete, a scout troop leader who took an errant arrow through the neck during a troop outing decades ago, which is still stuck in his ghost form. (“It’s very comfortable, though,” says Moriarty, who just has to watch how he walks through doorways.)

When the elderly occupant of the estate dies (and quickly shoots upward to the afterlife), ownership of the mansion transfers to a distant relative, Sam (Rose McIver), a freelance journalist and her chef-husband, Jay (Utkarsh Ambudkar), who decide to leave the city and move in. To the ghosts’ profound dismay, Samantha and Jay plan to refurbish the place as a bed-and-breakfast inn, constantly filled with (ugh) people. “I hate getting walked through,” Pete observes. “It’s probably the worst pain I can think of. No, wait — arrow through the neck. That beats it.”

On Moriarty’s first read of the “Ghosts” script, he felt an instant connection. “[‘Ghosts’] came at a time where I had done a lot of small, but more significant, television and film roles, and it was right in my wheelhouse,” he says. “If I am what they’re looking for, I think I can deliver.”

Show creators Joseph Wiseman and Joe Port were likewise captivated by Moriarty. He was one of the first actors they saw for Pete, and saw how Moriarty could play up Pete’s dorkiness without painting him into caricature.

“He was also incredibly good at being a dramatic actor,” Wiseman says. “There was this anger he could tap into. There’s a quick part [in the show] where he remembers an argument [he and his wife] were having and you can see him snap at it. But it’s funny anger, not like an ugly sort of anger, but it feels very real.”

Moriarty’s journey to “Ghosts” was not a straight shot from that Rockville talent show. He lost interest in drama after a lackluster experience in a freshman-year play. At Wootton High School, he dove into leadership roles in student government and swimming and served as senior class president (coincidentally, cast member Ambudkar also went to Wootton). Those activities superseded any interest he had in drama. Although now based in Maplewood, N.J., he thinks fondly of Rockville and the friends he still has there.

As a student at Boston College in the late 1990s, Moriarty attended improv and sketch shows in college, itching to participate. But it wasn’t until after graduation that he pursued it.

He joined the main stage cast of Improv Asylum in Boston. “[That’s] where I got my 10,000 hours,” he says. “That’s where I met some of my best friends. I did a solid decade of improv and sketch comedy and commercial work in Boston before I made the jump to New York.”

In New York, he eventually got his first TV gig, playing a waiter in an ABC Family (now known as Freeform) show “Chasing Life.” He also got two football gigs: in a prominent sketch with NFL star Peyton Manning and actor John Malkovich that opened the 2019 Super Bowl and a four-minute teaser before the kickoff of the 2018 AFC championship game featuring just him and Malkovich.

“John Malkovich and I were just in a green room, reading this four-page script together, this is so bizarre,” Moriarty recalls, who got the role in the teaser after a friend and casting manager passed along his reel.

Longtime friend and collaborator Matt Catanzano saw Moriarty’s work ethic firsthand — how he diligently kept record of the auditions he went on, noting when he got a callback. “He’s such a charming, funny guy, but he’s also so smart when it comes to that aspect as well,” says Catanzano, a fellow Improv Asylum alum.

Moriarty and Catanzano became the brains behind Simply Unemployable, an improv and comedy project, touring the country while they continued auditioning and building out their TV and film résumés.

“Even a good show, a bad show, a well-attended show, no one at a show — people always walk away loving Richie,” says Catanzano, who is now based in Los Angeles. “He has that ability to step onstage and people immediately feel at ease. They start laughing before anything even comes out.”

The pandemic slowed “Ghost’s” production, but reception has been warm since its premiere.

One episode this season, called “Pete’s Wife,” centers on Moriarty’s character’s attempt to see his still-living wife, Carol, played by Caroline Aaron. Years have passed since Pete’s death, but he yearns to know what has become of the family he left behind. After much prodding, he gets Sam, the only one who can communicate with the ghosts after a near-death accident, to invite Carol to the mansion. But Pete finds out that Carol has been harboring a devastating, decades-old secret.

“It was my first time where I was getting to perform in this television show and have this story line be about my character,” says Moriarty, who felt “energized” exploring the depth of the ever-chipper Pete. “It felt like a real career moment for me to be the center of an episode of television. . . . I’m hopeful the success of ‘Ghosts’ will allow me to do more film and television. I wanna keep doing this!”

Harrison Ford: The life story you may not know

Cities With the Most Recently-Built Homes

Adulting then and now: How growing up has changed

States with the most reported rental scams