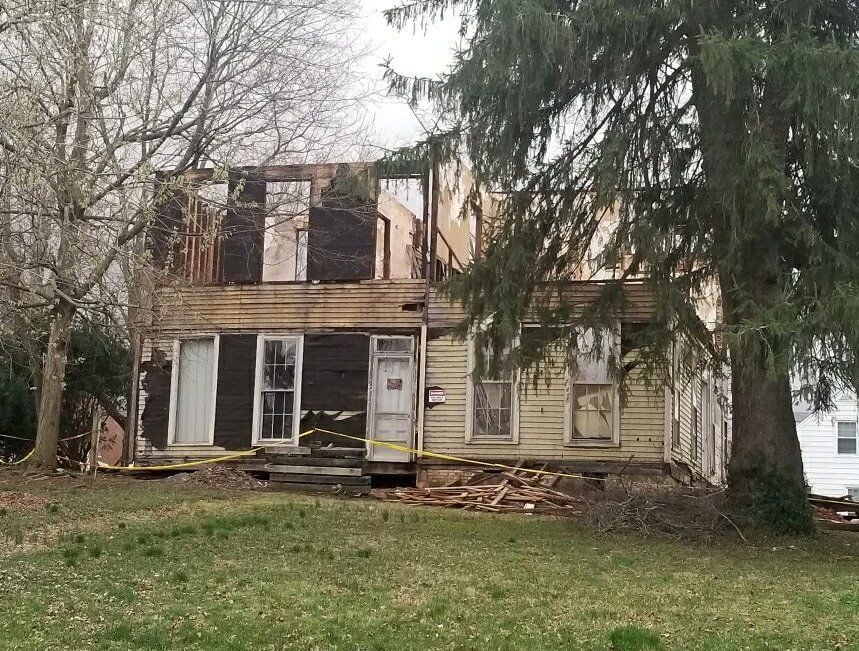 The so-called “Harned house” on West Walnut Street in Leitchfield (pictured) has been the subject of much debate following the announcement that it will be demolished to make way for the planned construction of a new Grayson County Center for Women’s Ministries. 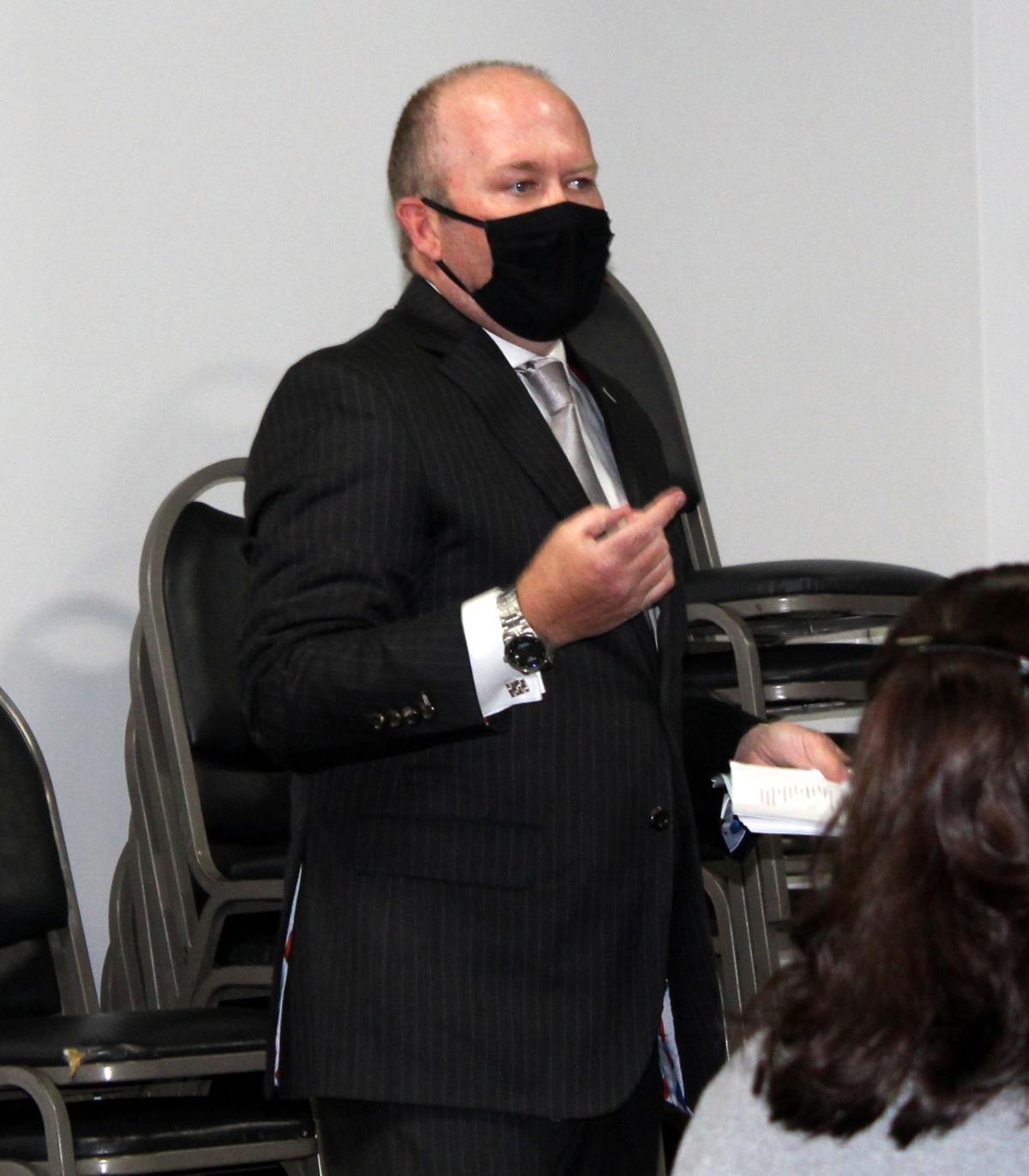 Bowling Green attorney Chris Davenport appeals to the Leitchfield Board of Adjustments to rescind the Grayson County Center for Women’s Ministries’ building permit.

The so-called “Harned house” on West Walnut Street in Leitchfield (pictured) has been the subject of much debate following the announcement that it will be demolished to make way for the planned construction of a new Grayson County Center for Women’s Ministries.

Bowling Green attorney Chris Davenport appeals to the Leitchfield Board of Adjustments to rescind the Grayson County Center for Women’s Ministries’ building permit.

The Leitchfield Board of Adjustments on Thursday rejected an appeal that sought to rescind the Grayson County Center for Women’s Ministries’ (GCCWM) permit to build a new facility on West Walnut Street.

Opening the Board of Adjustments’ public forum Thursday regarding this issue, Leitchfield Public Works Director Wesley Shull said that, on Nov. 16 of 2019, the GCCWM filed paperwork for a permit to build a residence at 216 West Walnut St., the site of the so-called “Harned house,” which is presently zoned an R-2 single-family, medium density residence.

The property was gifted to the GCCWM, a non-profit, Christ-based peer counseling service for women, in 2019 to use as the site of its new central location, and, after demolishing the Harned house, the center’s plan is to construct a new house out of which it will operate.

Following Shull’s detailing the timeline of events, Bowling Green, Kentucky attorney Chris Davenport, representing a neighboring property owner, argued that the GCCWM’s new facility should not qualify as a residential care facility, which is admissible under the R-2 zoning designation.

While Davenport and his client had initially intended to take their case to the Grayson Circuit Court, he said it was suggested to him to bring the case before the Leitchfield Board of Adjustments before seeking circuit court litigation.

Davenport said the GCCWM’s proposed structure could not operate as a residential care facility because such a facility is where someone with disabilities resides and receives services, such as a group home or recovery center.

Davenport argued that the GCCWM is not a recovery center, and, despite providing counseling services, it does not provide shelter, protection, or rehabilitation, which, he said, are services necessary to be a residential care facility.

Ultimately, he said that the facility would be one that provides counseling on an R-2 zoned property, but “the use is not a residential care facility,” and the first day it opened in a way non-conforming to its zoning designation, it would be subject to litigation.

Davenport noted that the GCCWM’s work is commendable, and the center should be applauded for it, but zoning ordinances do not treat people differently by “nobility of intent.”

The true issue, he said, is that, while the GCCWM offers an important service, it would not be doing so in an appropriate location were it to set up a facility on West Walnut Street in a residential area, so he asked the Board of Adjustments to rescind the center’s building permit.

Following Davenport’s arguments, the GCCWM’s Lexington, Kentucky based attorney Kevin Groseclose countered that the arguments stating the center would be non-compliant are premature, and, as a counseling center, the facility would in fact provide services to women with either permanent or temporary mental disabilities, satisfying the requirement for it to be considered a residential care facility.

Groseclose also said that statutes do not require someone to stay at a facility full-time in order for it to be considered a residential care facility, and he does not see how anyone could argue that the GCCWM does not meet the requirements to open its proposed facility under the current regulations and circumstances.

In closing, Groseclose said the GCCWM would “absolutely” meet the conditions of the statutes under which they were granted their building permit.

The Board of Adjustments was then informed it would be required to make a decision on whether to approve or deny the appeal to rescind the GCCWM’s building permit within 60 days of Thursday evening’s public forum, before the floor was opened to audience members wishing to express their thoughts on the matter.

Stacey Whitley, a neighboring resident of the Harned house, said those in the neighborhood do not have a problem with the GCCWM and its mission, but do not see why the center must operate out of a house in a residential area, as opposed to a church or office space.

A representative of the GCCWM in attendance Thursday said the center and its parent organization, the International Center for Women’s Ministries, typically try to avoid operating out of churches because they serve women of all denominations. This is why they strive to operate out of “home-like” locations.

Charlie White, another neighboring resident, said an office and residence “do not mix,” and argued that he does not see how the center could be classified as a residential facility if no one is there after 8 p.m. White also expressed concern that, as a counseling service, the facility could bring people with substance abuse issues into the neighborhood.

“We don’t want you in our neighborhood. Period,” White said.

Concluding the discussion, Board of Adjustments member Steve Kinkade said he found Shull had acted in a competent and diligent manner while performing his duties regarding the GCCWM’s building permit, and, for that reason, he made a motion to deny the appeal to rescind the center’s building permit.

Kinkade’s motion passed the Board of Adjustments on a 3-2 vote.