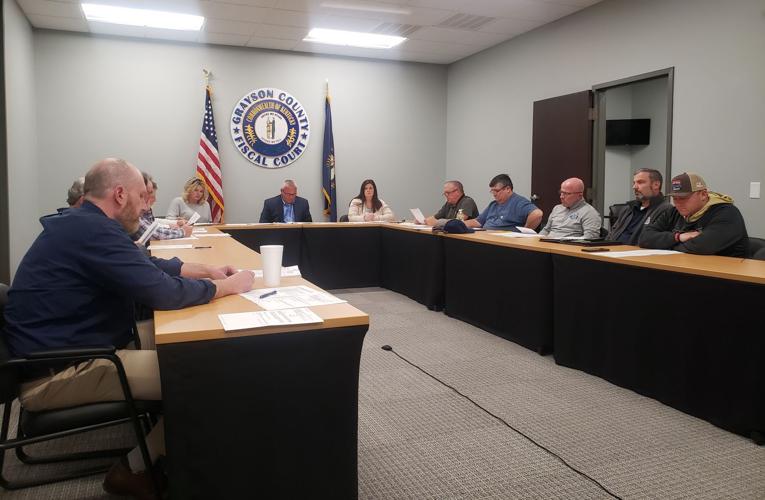 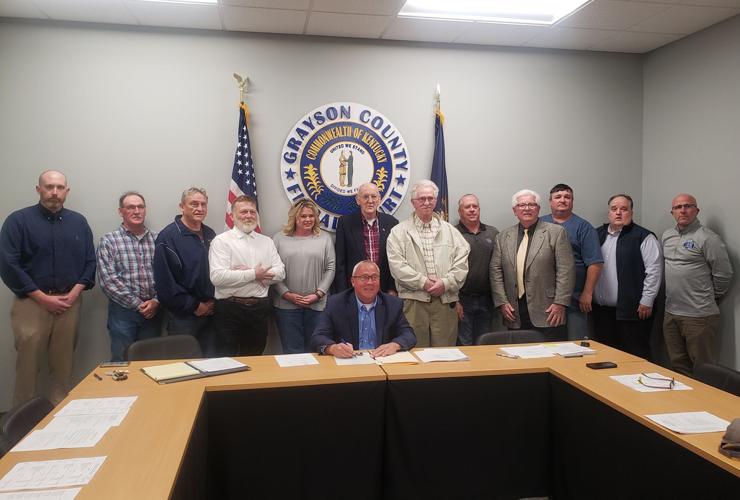 Prior to Tuesday’s fiscal court meeting, Grayson County Judge Executive Kevin Henderson signs a proclamation declaring Thursday, May 5, to be National Day of Prayer in Grayson County. Joining Henderson for the signing were numerous other county officials, as well as local religious leaders.

Prior to Tuesday’s fiscal court meeting, Grayson County Judge Executive Kevin Henderson signs a proclamation declaring Thursday, May 5, to be National Day of Prayer in Grayson County. Joining Henderson for the signing were numerous other county officials, as well as local religious leaders.

The Grayson County Fiscal Court on Tuesday evening approved the first reading of an ordinance that would legalize the operation of golf carts on designated county roadways.

Grayson County Judge Executive Kevin Henderson said the fiscal court had been approached on numerous occasions by residents of the county’s two lakes (Rough River and Nolin) about this issue.

The ordinance, if adopted, would permit golf carts that meet certain criteria to be operated on county roadways designated by the fiscal court, as recommended by a newly established Grayson County Traffic Safety Committee.

Per the ordinance, in order for a golf cart to be operated on specific roadways in the county, it would have to be issued a permit by the county; display a sticker or permit that identifies it is allowed to be operated on those roadways; be inspected by a certified inspector designated by the Grayson County Sheriff’s Office and certified through the Department of Vehicle Regulation; display a slow-moving vehicle emblem; be insured, with proof of insurance inside the cart at all times it is operated on a public roadway; be operated only by a person with a valid operator’s license in his or her possession; be restricted such that it does not cross any roadway at an intersection where the roadway being crossed has a posted speed limit of more than 35 miles per hour; and be operated only on designated county roadways approved by the fiscal court.

In order for a public county roadway to be considered as one on which golf carts may be operated, citizens would be required to complete an application, along with a petition signed by no fewer than 10 separate/unique owners of property (or 50% for roadways with fewer than 20 homes) on the street/roadway to be impacted.

Additionally, any citizen, group of citizens, or neighborhood homeowner’s association would be permitted to request the addition of multiple county roadways within a neighborhood as designated county roadways for golf cart operation at once. In order to do so, once again, an application must be submitted, along with a petition signed by no fewer than 25 separate/unique owners of property (or 50% of the total number of occupied homes, rounded down if necessary to the nearest whole number, for neighborhoods with fewer than 50 homes) from the streets/roadways to be impacted.

The ordinance states that the Traffic Safety Committee would be appointed by the Grayson County Judge Executive and consist of the county sheriff (or any certified officer in his or her employment), the county road supervisor, and the county road assistant supervisor.

Minor children would also not be permitted to operate golf carts on public roadways.

Violators of the ordinance could face fines of $100 to $250 for their first offense and $250 to $500 for any subsequent violation committed within two years of a prior conviction.

Logsdon specified that this ordinance would not apply to UTVs or side-by-sides.

An initial point of contention among those in attendance at Tuesday’s meeting was that the ordinance would require golf carts’ being operated on public roadways to be equipped with seatbelts for each designated seating position because golf carts do not come equipped with a roll bar.

However, Henderson said that everything outlined in the county’s ordinance comes specifically from the requirements set by Kentucky Revised Statutes, and to remove that requirement would expose the county to liability and potential lawsuits if someone were injured due to his or her cart’s not having seat belts equipped.

At the conclusion of the discussion, the fiscal court voted unanimously to approve the first reading of the ordinance, with the seat belt requirement left in.

The fiscal court will be required to hold and approve a second reading of the ordinance before it is adopted into law.

In other business, the fiscal court:

CO: SUSPECT SHOT BY OFFICERS AFTER I-70 CHASE