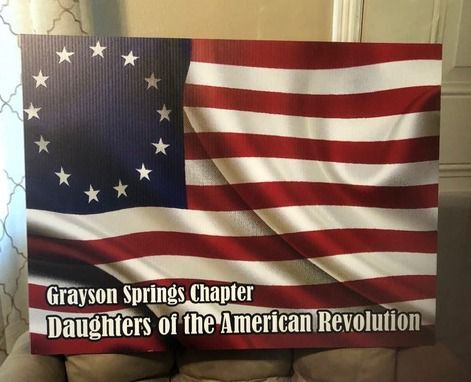 Pictured is the front of one of the Grayson Springs DAR chapter’s Betsy Ross flag replicas, which will be posted around Leitchfield’s Public Square courthouse Nov. 1 in honor of Revolutionary War soldiers with ties to Grayson County. 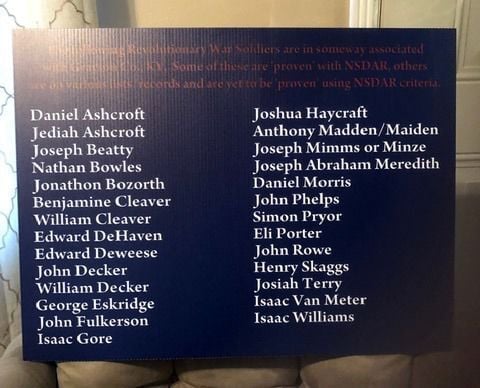 The reverse side of the Grayson Springs DAR chapter’s Betsy Ross flag replicas displays the names of the patriots.

Pictured is the front of one of the Grayson Springs DAR chapter’s Betsy Ross flag replicas, which will be posted around Leitchfield’s Public Square courthouse Nov. 1 in honor of Revolutionary War soldiers with ties to Grayson County.

The reverse side of the Grayson Springs DAR chapter’s Betsy Ross flag replicas displays the names of the patriots.

The flags will feature a replica of the Betsy Ross flag on one side and names of the patriots on the opposite side. They will be placed on the four corners of the Leitchfield Public Square courthouse on Nov. 1 and are expected to remain there until mid-November over Veterans Day.

The research to identify more patriots is ongoing.

Betsy Ross, a widow who ran her own upholstery business, was approached by General George Washington, Robert Morris and George Ross to sew the first flag in May 1776. Washington showed her a six-pointed star, and she demonstrated with one snip of the scissors how to cut a five-pointed star.

On June 14, 1777, the Continental Congress, in an effort to promote national pride and unity, adopted the national flag. “Resolved: that the flag of the United States be thirteen stripes, alternate red and white; that the union be thirteen stars, white in a blue field, representing a new constellation.”

The Daughters of the American Revolution, also known as the DAR, was founded in 1890. It is a volunteer women’s service organization dedicated to promoting patriotism, preserving American history, and promoting the education of future generations. Any woman 18 years of age or older regardless of race, religion, or ethnic background who can prove lineal descent from a patriot of the American Revolution is eligible for membership.

The Grayson Springs Chapter DAR is answering the charge of the national organization as a service organization to the local community. The chapter has sponsored separate events honoring women veterans and Vietnam veterans living in Grayson County.

The chapter has placed a Vietnam veteran’s memorial plaque and bench at American Legion Post 81 Veterans Memorial Park in Leitchfield, and, to uphold the national DAR commitment to children’s education, chapter members maintained a program wherein thousands of children’s books were distributed over several years. The vision of the program was to see that every child in the county owned a book. The chapter also seeks to acknowledge the sacrifices made by public servants through small gestures of appreciation.

Currently, the Grayson Springs Chapter is participating in Wreaths Across America, which is a drive to place wreaths on veterans’ graves at Kentucky Veterans Cemetery Central in Radcliff in December.

The DAR encourages individuals to stop by the square in November to read the names of the Grayson County patriots whom have been identified thus far and fought in unity with those of the 13 colonies to establish the fledgling United States of America.

For further information about the DAR or the Grayson Springs Chapter, contact Regent Linda Peterson at lindap49@windstream.net.