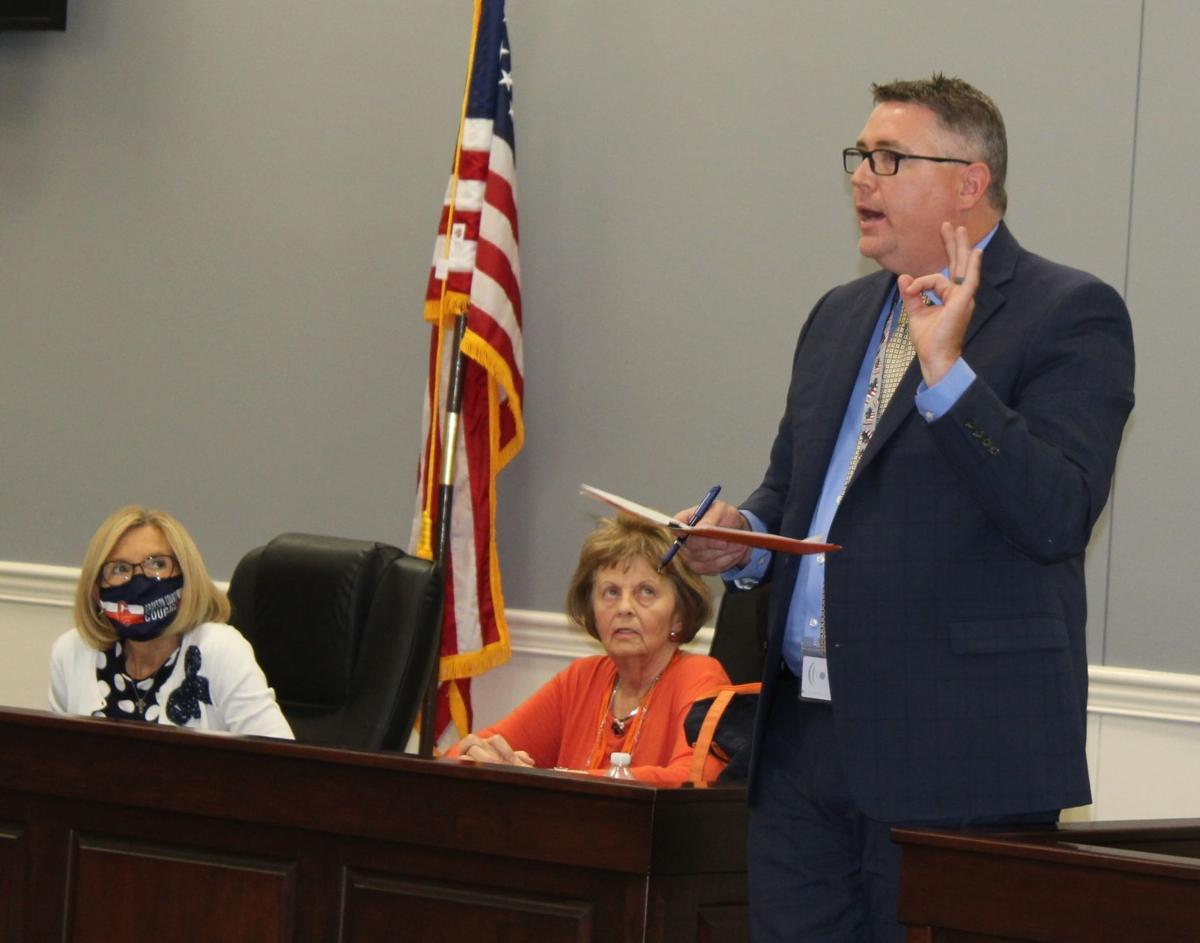 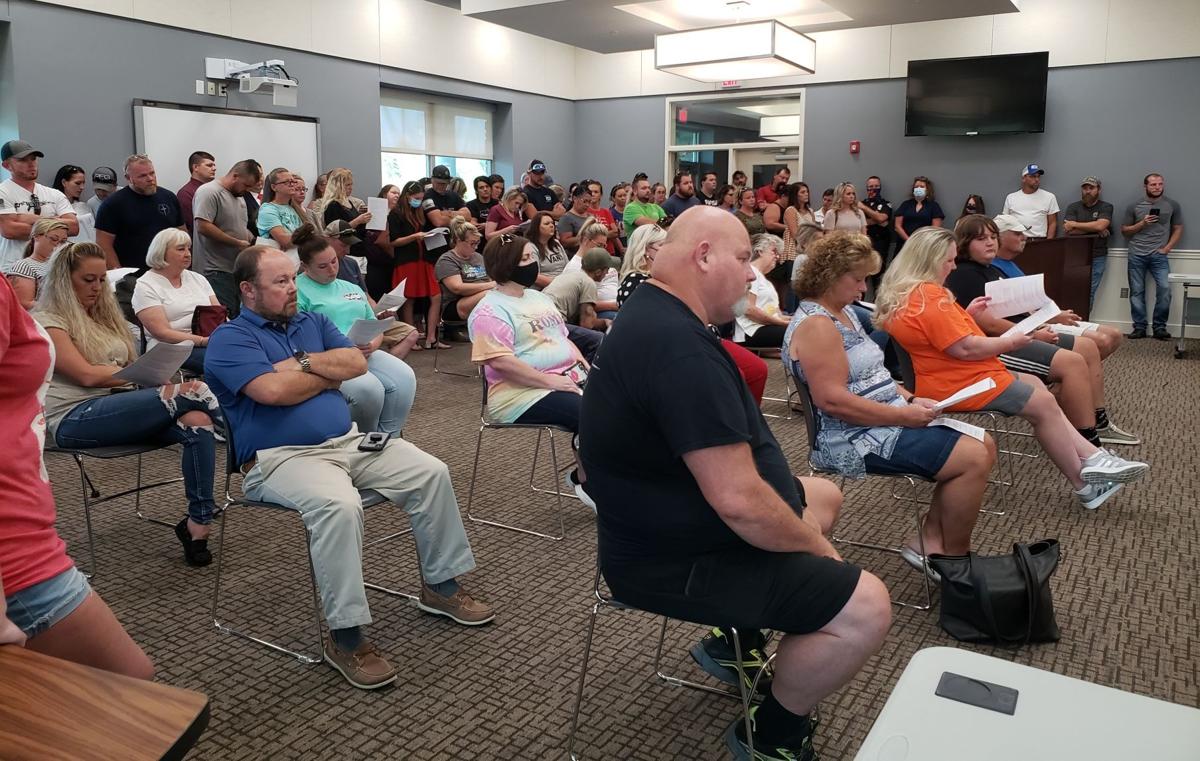 The Grayson County Board of Education meeting room was standing room only last Thursday night as community members attended to voice their concerns regarding the recent mask mandate in Kentucky schools.

The Grayson County Board of Education meeting room was standing room only last Thursday night as community members attended to voice their concerns regarding the recent mask mandate in Kentucky schools.

The Grayson County School Board ended its regular meeting early last Thursday night after what began as residents’ taking turns voicing their concerns regarding the state’s mask mandate in schools turned to shouting and cursing.

Dozens of local residents attended last Thursday’s meeting following the executive order by Gov. Andy Beshear that required students and staff in all schools in the state to wear masks.

School Board Chair Carolyn Thomason opened the meeting and said she appreciated the visitors’ attendance and hoped they would continue to support and pray for the school district, community, and nation as challenges continue as a result of the COVID-19 pandemic and its related mandates.

Grayson County Schools Superintendent Doug Robinson then spoke and said each speaker would be allowed three minutes to address the board.

The first speaker, Wendy Higgs, said she has two grandchildren in Caneyville Elementary School and was concerned because, “Our rights are being trampled on — not just the masks, everything.”

Higgs then criticized officials for not standing up against the mandates before saying she would not be vaccinated for COVID-19.

Another speaker, Missy Bratcher, said she felt that many parents are angry and frustrated because they have no control over their children’s’ education, and due to the confusion regarding what students are required to quarantine after being exposed to someone who has tested positive for COVID-19.

She also said that parents who do not want to mask their children would keep them out of schools.

Robinson said that the need for a student to quarantine is determined by the Grayson County Health Department and the Kentucky Department of Education and differs on a case by case basis.

“Every individual case is different,” he said, adding that there is no black and white reference as to how the quarantines work, other than, if students are masked and more than three feet away from a positive case, they do not need to quarantine.

Jacob Clark, a Republican candidate for District 18 state representative, addressed the board and said that the American government is “bottom up,” and mandates such as those requiring masks should be made by the school board at the local level, not the state government.

Visitors continued to press the school board on whether the district would uphold the governor’s executive order, and Robinson said, “We’re enforcing the mask mandate.”

Another speaker expressed concern regarding the alleged actions of a teacher in the district; however, Robinson said the board would not publicly discuss a personnel matter.

As tensions escalated and more audience members began speaking out of turn, additional Leitchfield Police Department personnel responded to the board of education to assist School Resource Officer Ian Renfrow with securing the building, and the school board adjourned, unable to move forward with its regular business meeting.

The school board held a follow-up special called meeting on Tuesday morning of this week at 7:30 a.m. to complete the business portion of its previous meeting.

Among the items discussed Tuesday was a resolution authorizing Robinson “to take all necessary steps to support the Council for Better Education, Inc. (“CBE”), in its legal challenge to the unconstitutionality of the tax credits in House Bill 563, including the payment of any appropriate dues or assessments related to this school district’s membership in CBE or its support of the referenced legal challenge.”

This resolution was approved by the school board, and Robinson explained that the CBE is challenging the portion of House Bill 563 that would allow private schools to receive tax credits.

Critics of the bill claim that providing tax credits to private schools would divert funding from the public school system, while supporters of it say doing so would provide more educational options for Kentucky families.

Grayson County Schools’ attorney, David Vickery, said he and Robinson are personally “lukewarm” on the issue, but felt compelled to support the CBE’s challenge by virtue of the district’s membership in the council.

This Republican senator accidentally told the truth about Donald Trump

Badgers in the NFL: Check out top performances by former Wisconsin players in Week 6

Badgers in the NFL: Check out top performances by former Wisconsin players in Week 6