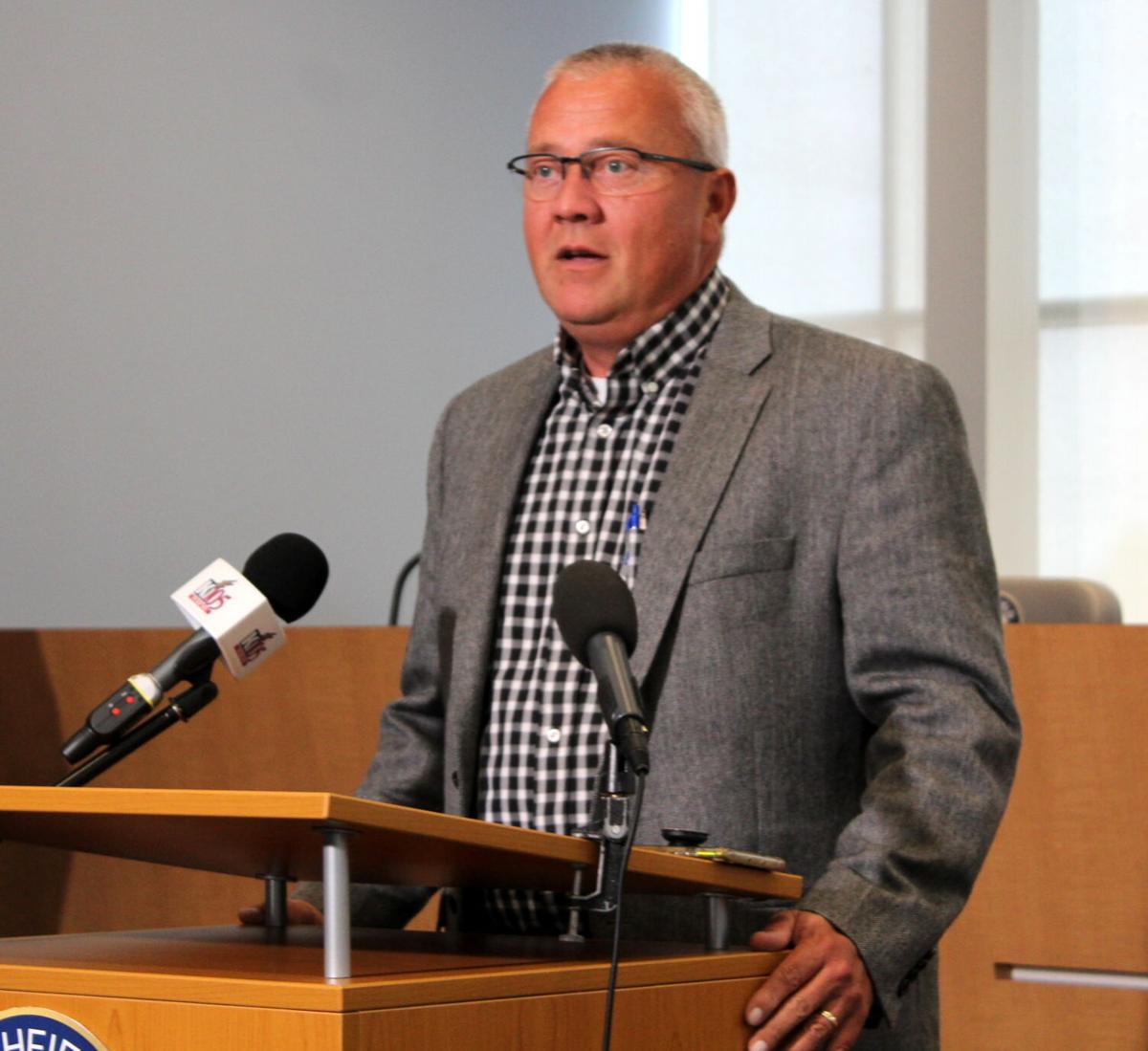 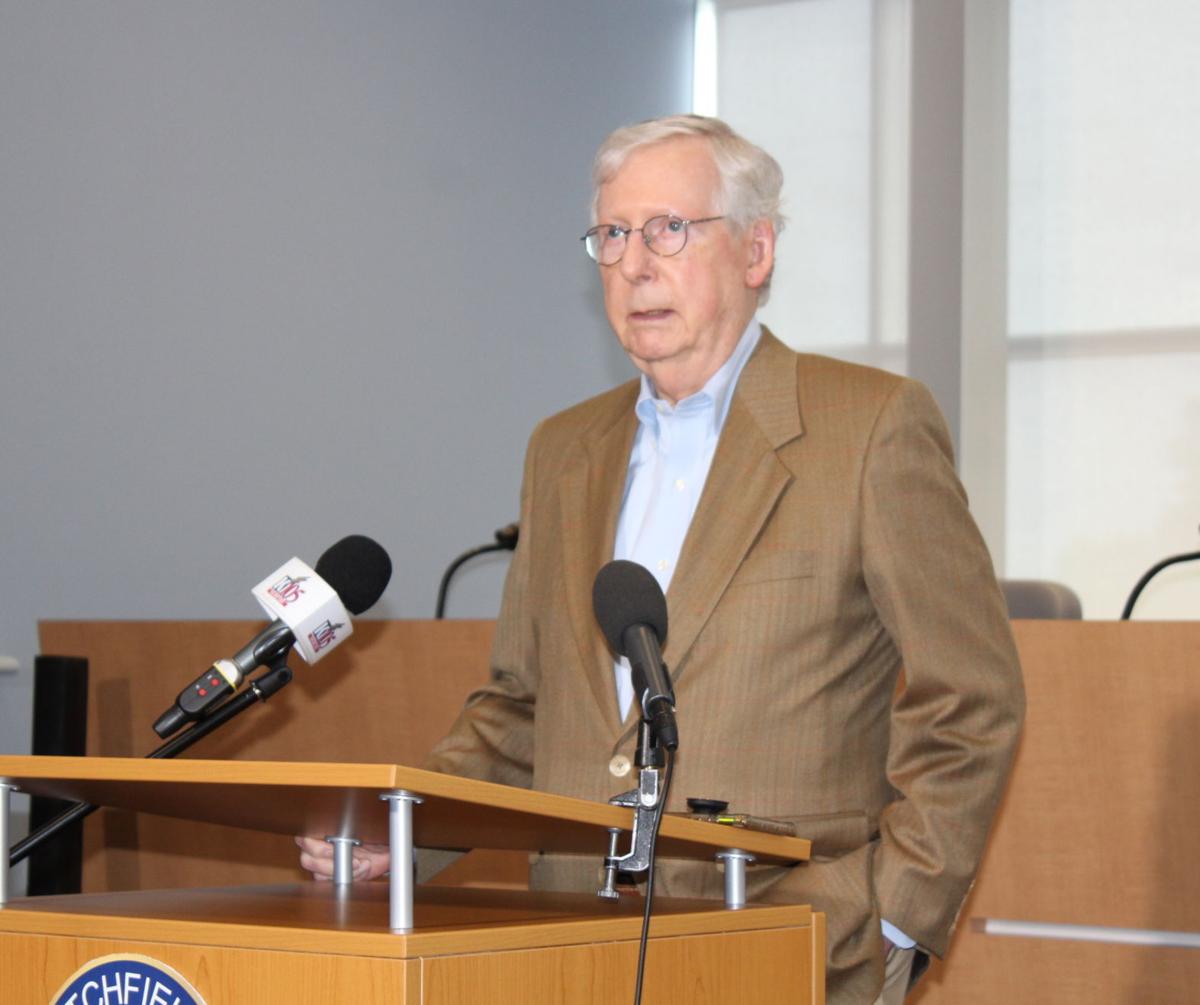 Republican U.S. Sen. Mitch McConnell visited Leitchfield on Tuesday and held a closed-doors meeting with local leaders regarding the status of vaccinations, inflation, the workforce, and the United States’ withdrawal from Afghanistan.

At the conclusion of the private meeting, McConnell was welcomed to the Leitchfield City Council meeting chambers by Grayson County Judge Executive Kevin Henderson for a brief press conference, during which he addressed the withdrawal from Afghanistan as well as the ongoing COVID-19 pandemic.

“The precipitous withdrawal from Afghanistan is an utter disgrace and a stain on our national honor,” he said.

McConnell said that, at the start of the conflict 20 years ago, there was “no optimism” that the U.S. would go into Afghanistan and turn it into “a Western style, Jeffersonian democracy.”

“We went there because it was in our best interest to prevent Al Qaeda, which attacked us on Sept. 11, 2001, to have a safe haven in which to operate and attack us again,” he said.

McConnell said that, while there have been “a couple of periods of significant conflict,” the American occupation of Afghanistan has “has not been a continuous conflict.”

“Look at the last year for example; not a single American service person lost their lives in Afghanistan last year,” he said.

According to McConnell, the conflict in Afghanistan comprises “less than 1%” of the U.S. Department of Defense’s annual budget, and he noted that while both President Barack Obama and President Donald Trump wanted to leave Afghanistan, he encouraged them not to do so.

McConnell said that, even if one thought it was the right time to fully withdraw from Afghanistan, “the calamity that we’re witnessing on our television screens is outrageous. I don’t think this administration could organize a two-car funeral. And in this particular instance, they’re endangering the lives of Afghans, who were our interpreters and collaborators and on our side in the conflict, and Americans.”

He said he believes that, now, President Joe Biden must deploy enough military personnel to Afghanistan to ensure the airport is defended and help refugees leave the country, and he wishes the president well in that endeavor.

“But this was a colossal, colossal blunder of gargantuan proportions, and, as I said earlier, a stain on the reputation of the United States,” said McConnell.

Kentucky’s senior senator then opened the floor for questions, the first of which sought his comments regarding the ongoing debate regarding mask mandates for school children.

“Well, I think the only solution to the pandemic is vaccines,” McConnell said. “As some of you may recall, I was a polio victim when I was a youngster. I’ve studied the history of that disease. It took 70 years to come up with two polio vaccines that work. And, believe it or not, that disease is almost totally eradicated in the entire world.”

According to McConnell, thanks to Operation Warp Speed — a public-private partnership initiated by the U.S. government to facilitate and accelerate the development, manufacture, and distribution of COVID-19 vaccines, and a part of the CARES Act — the U.S. discovered three highly effective vaccines in less than a year, which, he said, is “really a modern medical miracle by any estimation.”

He then addressed the myriad of rumors circulating about the pandemic, and said it is a fact that almost 97% of the people in hospitals across America are unvaccinated.

“So I would counsel folks here in Grayson County and across Kentucky and, for that matter, across the country, the way to get on top of this and to end it is to get vaccinated,” said McConnell.

'Not surprised:' Lawmaker reacts to Trump suing her committee

Dr. Wen on what Colin Powell's death teaches us about vaccines