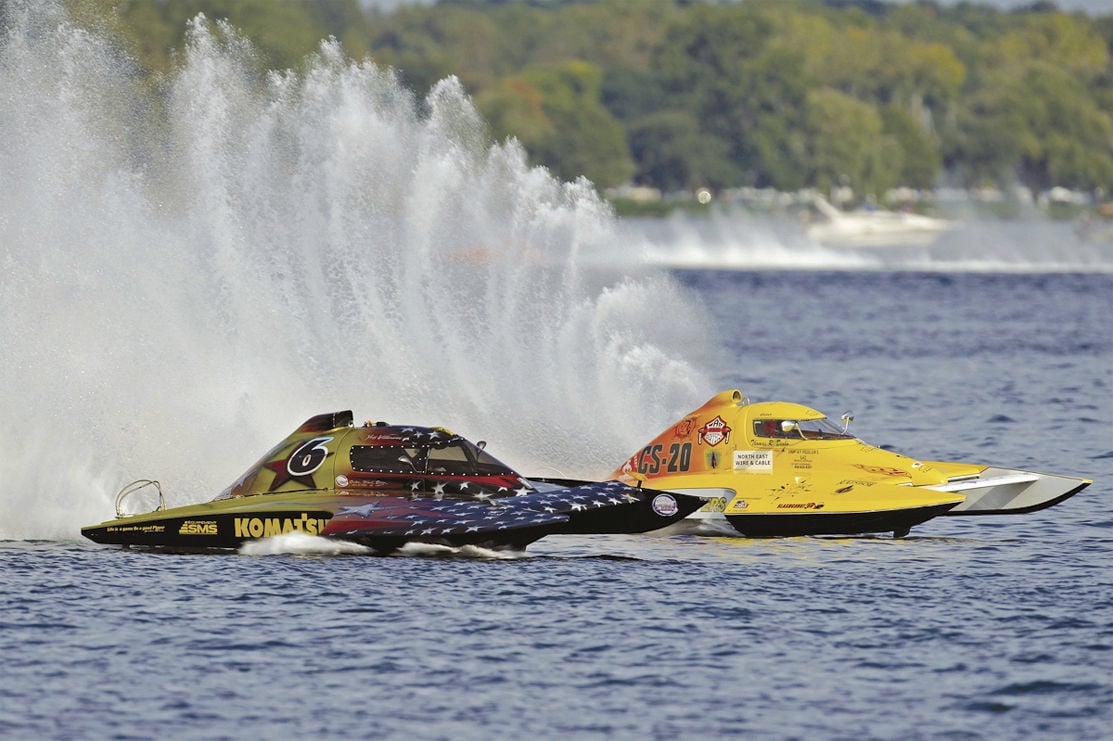 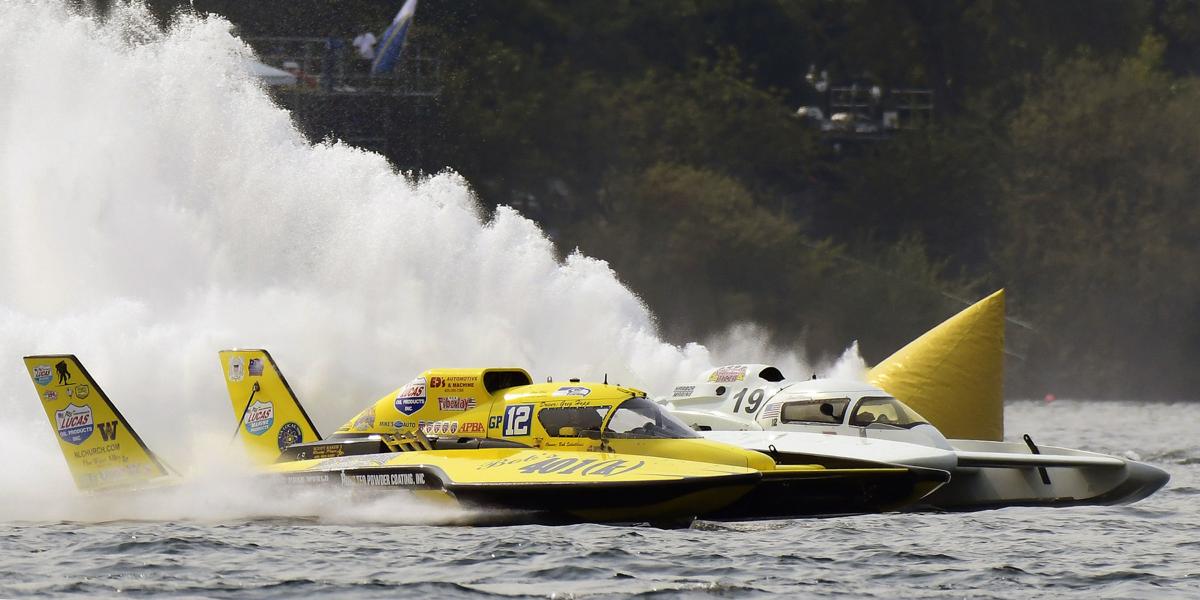 Grand Prix hydroplanes will be racing on the Ohio River in Owensboro on Aug. 14-16 with speeds of around 170 mph. The Owensboro Hydrofair is returning after 40 years.

Grand Prix hydroplanes will be racing on the Ohio River in Owensboro on Aug. 14-16 with speeds of around 170 mph. The Owensboro Hydrofair is returning after 40 years.

Owensboro Hydrofair returns Aug. 14-16 after an absence of 40 years.

And this time, it’s free.

But this isn’t your father’s Hydrofair.

“Everything has changed in hydroplane racing since then,” Randy Lientz, this year’s race director who worked with the old Hydrofair in the mid-’70s, said last week. “And in dramatic fashion. The only thing remaining constant is someone wins and someone loses.”

The unlimiteds — the big hydroplanes with up to 3,000 horsepower and speeds approaching 200 mph — won’t be back.

But the smaller boats are even more exciting, Lientz said.

“The unlimited class is down to about five active teams now and about five races this year,” he said. “The Grand Prix class is the loudest, fastest, most impressive.”

Grand Prix boats are a minimum of 23 feet long, have 1,500 horsepower and hit speeds of about 170 mph, the American Power Boat Association says.

More than 50 boats in seven classes will be in Owensboro that week, Lientz said.

In the ’70s, most races featured a dozen or fewer — usually fewer — boats.

And most years, at least a couple had engine problems.

In the ’70s, Hydrofair was notorious for inflating attendance figures.

But in 1978, when the Unlimited Racing Commission and its hydroplanes left, Hydrofair officials revised those figures substantially — to 30,000 and 27,000, respectively.

Attendance figures had been inflated to boost the sport, they said.

That has happened a lot of places, Lientz said.

10,000-plus expectedHe said he’s confident that this year’s crowd will “be in the five digits.”

“Competitors will be coming from Washington, Florida, Maryland, Canada and all over the country,” Lientz said.

He said, “Fans from Texas, Washington, New Jersey and other places have already made hotel reservations in Owensboro for that weekend. Those are the die-hard fans.”

Lientz said, “We expect new fans to come from Michigan, Ohio, Tennessee, Kentucky, Indiana and other states that border Kentucky. Basically, a three-hour radius around Owensboro.”

Mark Calitri, president of the Owensboro-Daviess County Convention & Visitors Bureau, said, “We will soon launch an aggressive multi-state marketing initiative aimed at selling hotel and convention center packages. We encourage Owensboro residents to invite their friends and family to enjoy this premier event and showcase their hometown.”

Friday After 5 that weekend should see a lot of new faces, he said.

Calitri said since this is a first-year event, “we have conservatively estimated the economic impact at $722,000.”

That’s comparable to the cost of the Owensboro Air Show.

This year’s air show was canceled and the Hydrofair was brought back for variety.

But the air show is already set to return in 2021 with the U.S. Navy’s Blue Angels.

Ross said the Owensboro City Commission will decide later this year if it wants to switch to hydroplanes after 2021, have both an air show and a Hydrofair or alternate years.

Mayor Pro Tem Larry Maglinger, who pushed for the return of the hydroplanes, agreed.

This year’s turnout will help with that decision, he said.

Ross said that although the races are free, there will be two places along the riverfront that will offer paid seating.

That’s the Kentucky Legend Pier behind the Owensboro Convention Center and in all of English Park, where the pits for the boats will be.

Lientz said, “On that Saturday and Sunday, we’ll have racing from 10 a.m. to 4 p.m. with an hour off for lunch at noon. During the down time, drivers will be signing autographs in English Park and Smothers Park.”

12-minute heatsHe said, “The average race lasts 12 minutes. They are sprint races. We’ll have 20 heats each day, starting a new heat every 15 to 20 minutes.”

Four cranes will be in English Park to lift the boats in and out of the water.

“Each heat is four laps — five miles,” Lientz said. “Each day will be pretty jam-packed.”

Jagoe Homes is the presenting sponsor.

In the 1960s, Owensboroans Bill Sterett and Jim McCormick were superstars on the unlimited hydroplane circuit.

So, local leaders worked to get a race here.

And it wouldn’t be just a race.

The Owensboro Regatta, as it was called then, would include an Aqua Festival with a parade, beauty queens, carnival, barbecue, golf tournament, art show, fireworks, dances and excursions.

It was to be financed by the sale of $2 buttons.

But it was hard to keep people from slipping in along the riverfront.

Sterett won that first race in the Miss Budweiser before a crowd estimated at 40,000.

By 1976, crowds had become less enthusiastic and the festival committee decided to find a new name.

In December 1976, the committee selected Owensboro Hydrofair as the new name.

A contest had been held to get ideas for it.

There were 306 entries and two people suggested Owensboro Hydrofair, splitting the $100 prize.

The unlimiteds proved to be too expensive and they were dropped after 1978.

In 1979, the city tried scaling back to Grand Prix boats, but the weather that June was bad — rainy with temperatures in the 60s — and crowds were down to between 17,000 and 27,000, depending on who was doing the estimating.

In 1980, the parade was scrapped due to a lack of interest.

Even worse weather than the year before forced racing to be canceled, saving the committee the $30,000 purse.

That meant that the festival cleared $3,711 that year.

But committee members said there weren’t 100 people in Smothers Park before the race was canceled.

That November, the committee voted to end Hydrofair.

Owensboro had lost interest in the races, it decided.

Evansville started its own hydroplane festival when the big boats left Owensboro.

Last year, Evansville HydroFest announced that it was calling it quits after a $70,000 loss the year before.

There have been several attempts through the years to bring the hydroplanes back to Owensboro.

In 2001, Tom Gaffey. who was Hydrofair president in 1978, and other local enthusiasts announced that they were are working toward bringing the boats back in 2002.

“We’re not talking about competing with Evansville,” Gaffey said. “We’re talking about a separate event — maybe with both unlimiteds and Formula One boats.”

There were 13 unlimiteds on the circuit that year.

But the race never happened.

But David Edds Jr., an official with the newly reincorporated Owensboro Regatta Inc., said he was confident the boats would strut their rooster-tails along the Owensboro riverfront again someday.

He died last year before seeing his dream realized.

When terrorists attacked America on Sept. 11, 2001, it sent shock waves through the travel industry.

There was concern in Owensboro that people might not be traveling in 2002.

The race was going to cost at least $250,000 and local sponsors were leery about making that kind of investment in an uncertain economy.

John Bays, who was the owner of the Executive Inn Rivermont then, said the group had approached him about putting up the entire $250,000.

That, he said, was more than he could afford.

In 2017, there was more talk about bringing back the boats.

Jared Bratcher, sports marketing director for the Owensboro-Daviess County Convention & Visitors Bureau, said then, “It will cost $7,500 to $10,000 to bring it here. We’ll need a partner to bring it in.”

But he said he was optimistic.

Turns out, he was right.