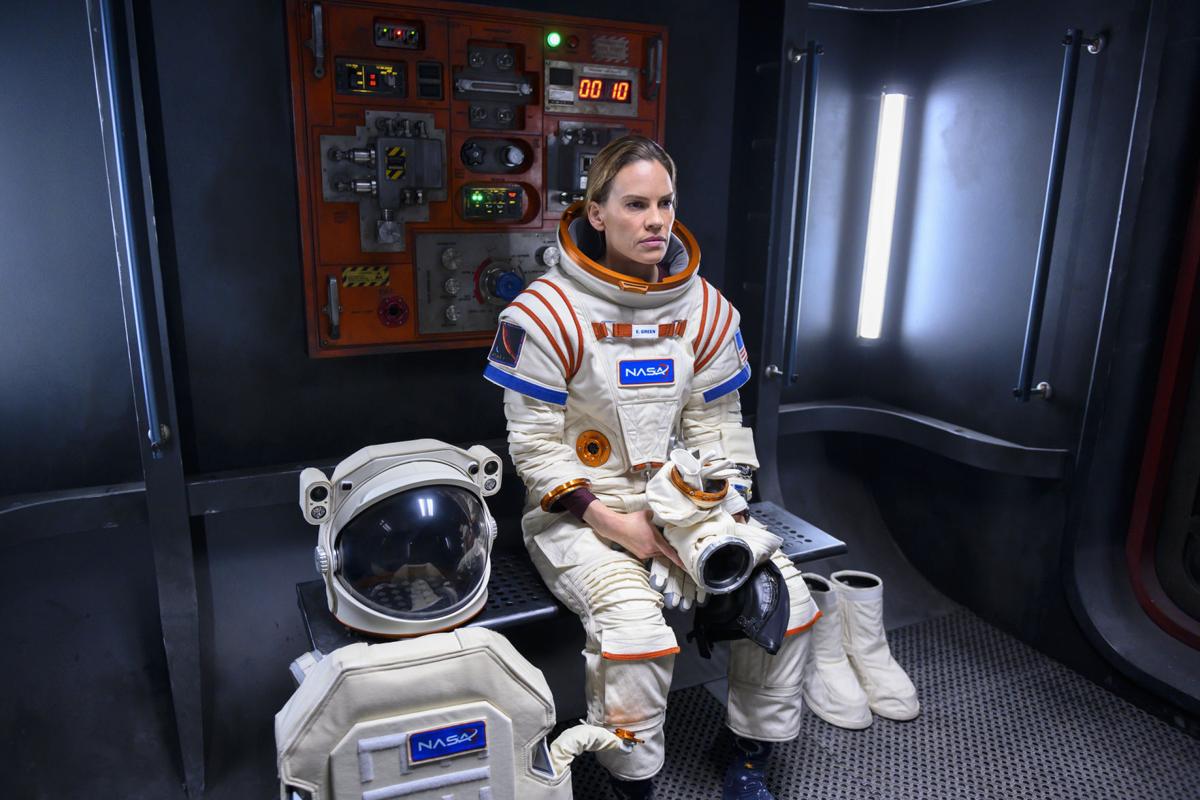 Hilary Swank plays the commander-designate of a Mars mission, who is also dealing with some family issues, in “Away.” 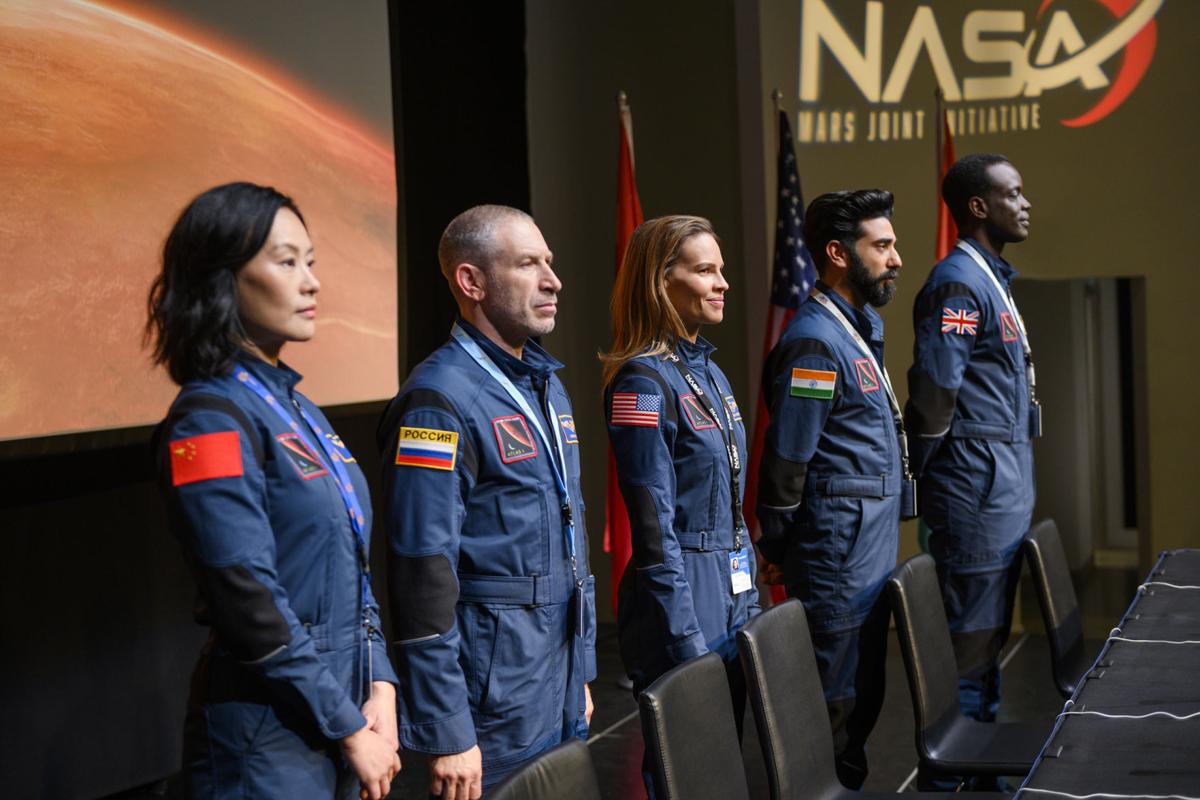 Hilary Swank plays the commander-designate of a Mars mission, who is also dealing with some family issues, in “Away.”

Raise your hand if you used to be one of those people who were not at all interested in going to Mars. (Boring, costly and creepy — right? To say nothing of viable.)

But lately? After those endless refrains of “Tomorrow Belongs to Me” during the Republican National Convention? And now armed teenagers going militia on us? And with hurricanes arriving in pairs? Getting off this forsaken planet is looking better all the time. “Love it or leave it” might as well be the new “Smoking or nonsmoking?”

Netflix’s intriguing but overwrought new astronaut drama, “Away,” is a couple of steps ahead of you on this. It’s another melancholy and occasionally triumphant take on the brave souls who will someday set foot on our neighboring Red Planet — a journey that “Away’s” creator, Andrew Hinderaker, showrunner Jessica Goldberg (“The Path”), and some big-name collaborators (including “Friday Night Lights” producer Jason Katims and “My So-Called Life’s” Ed Zwick) present as both a fait accompli and a deadly risk.

Echoing the optimistic rhetoric in political stump speeches, the question is

not if we’re ever going, it’s how soon. To emphasize that, “Away” (streaming Friday) is set more or less in the current day, as an international space cooperative prepares to launch a five-person crew

on a three-year trip to Mars and back.

Somewhat like Sean Penn before her (in Hulu’s deeply doleful 2018 mission-to-Mars series “The First”), Oscar-winner Hilary Swank stars as former Navy pilot Emma Green, the commander-designate of the Atlas I mission. She’s fulfilling a dream that dates back to her Montana girlhood, yet it’s tearing her apart. She’s a wife and mom, you see, and “Away” seems to be counting on her tears (and yours, if you’re an easy mark) as a sustainable form of water supply.

“Away” regards the angst of leaving Earth as a more important obsession than the destination; the whole series is built around the pain Emma feels by leaving her husband, Matt Logan (Josh Charles), a mission-control expert and former astronaut who is permanently grounded by a genetic medical condition, and their daughter, Alexis (Talitha Bateman), a high school freshman who deals with her mom’s absence by falling for a cute boy (Adam Irigoyen) who introduces her to the forbidden world of dirt bikes.

It’s easy to be drawn to “Away’s” determination to dredge through emotions more than the science (too bad, space nerds), because what could be more profound, more unsettling, than to leave one’s planet, knowing that the only way back depends on flawless machinery and math?

It’s too bad the series lays everything on so thick, resulting in a work of television that feels far too routine. Ever wondered what it would truly feel like to be on the first trip to Mars? Turns out, it feels a little like a zero-gravity season of “E.R.,” or some other passably decent network drama in which an ensemble of highly trained experts must overcome their personal issues and simmering conflicts to get through another day of urgent crises, of which “Away” offers plenty, from faulty machinery to physical and mental deterioration.

While fueling up at NASA’s nifty lunar base, the Atlas craft barely dodges a deadly mishap that has Chinese astronaut Lu Wang (Vivian Wu) and Russian cosmonaut, Misha Popov (Mark Ivanir), doubting Emma’s leadership capability — and filing complaints against her with their superiors back home.

Both of these antagonists are clumsily sketched at first, leaning hard toward old stereotypes (the Chinese woman, who also happens to be a wife and mother, suffers from self-imposed rigidity and repression; the Russian man, a grizzled veteran of Soviet-style compliance, is a tightly wound vodka shot of resentment) before the writers begin to grant them more suitably complex backstories.

Two other characters on the crew — Ram Arya (Ray Panthaki), a hotshot Indian fighter pilot, and Kwesi Weisberg-Abban (Ato Essandoh), a Ghanian-born British botanist — exist mainly to provide trite flashback material, as “Away” methodically and often tediously fills us in on what makes each of these pioneers into the people they are. Many of “Away’s” plot twists and insights can be detected from great distances without the aid of a telescope.

“Away” is also earthbound at least as much as it’s in space. While Emma endures the months-long trip to Mars, her husband and daughter experience setbacks (major and minor) that keep her in a suspended state of work/life agony, especially as the Atlas leaves the reach of iPhones and the emails begin take a half-hour to send and receive. Frankly, that moment can’t come soon enough; the Atlas crew sets off with so much connectivity to home that the series at first resembles an extra-long T-Mobile ad.

Rather than lend shape and context to the character, Emma’s constant need to check in with Matt and Alexis — freaking out when a text goes unanswered for a day — begins to feel like a sexist form of penance for her “choice” to leave them. Can we not simply revel in the fact that a woman is leading a mission to Mars and let her daughter fail calculus if need be? Can we not let this crew slip some surly bonds without the guilt? While watching Swank strain to give a meaningful performance, it seems a shame that so much of “Away’s” time dwells on keeping Emma at this needlessly fragile brink.

And yet, it is this fraught combination of personality, psychology and physicality that remains “Away’s” strongest thematic anchor, echoing the 2014 Esquire article that inspired the series. Who do we become in space?

We cannot really know what it will be like to make this trip until someone actually does it. No offense to SpaceX’s summer astro-bros, Bob and Doug (and with the possible exception of that Canadian guy who sang David Bowie songs in orbit), but today’s astronauts tend toward the dutifully bland when describing their experiences, a reminder of Jodie Foster’s best line from the 1997 interstellar encounter movie “Contact”: “They should have sent a poet.”

“Away” may not quite catch the poetry it grasps for, but it gives a viewer the feeling that we’re closer to Mars, emotionally, than we’ve ever been.

Pushing far forward, from space drama to a welcome dose of high-quality science fiction, a viewer might be more tantalized and even disturbed by the initial episodes of HBO Max’s “Raised by Wolves,” creator Aaron Guzikowski and executive producer Ridley Scott’s baffling story of two 22nd-century androids (Amanda Collin and Abubakar Salim as “Mother” and “Father”) who flee a war-torn Earth for a distant but inhabitable rocky planet called Kepler-22B.

Once there, Mother and Father have been tasked with raising a six-pack of fetuses (it’s Mother’s job to wire herself up to the amniotic packaging and bring them to term), with the idea of rebooting and repopulating the human race.

Programmed to protect and educate their brood according to atheist principles, Mother and Father discover Kepler 22B isn’t as nourishing an environment as their creator might have hoped. They endure the loss of several of their children in the early years, followed by the unwelcome arrival of a space Ark carrying members of a religious sect called the Mithraic.

As her protective maternal instincts kick in, Mother reveals an ability to weaponize herself into a flying siren to ward off invaders (Collin gorgeously intuits her character’s artificial command of logic with an Annie Lennox-esque mystique). This means war, instigated by an interloping criminal (enduring “Vikings” oddball Travis Fimmel) who has joined the Mithraic with his ruthless companion, Sue (Niamh Algar), as a ticket to escape Earth.

Here, science fiction has every advantage over “Away’s” schmaltzy realism. “Raised by Wolves” (the first three of 10 episodes premiere Thursday) is just as much concerned with the same theme — the limitations and demands of parenting. But it also gets a chance to devise an entirely new and unfamiliar code of after-Earth ethics and unpredictable responses to love, hate, faith and war. A viewer isn’t sure who the good guys are and who the bad guys are. (As far back as “Alien,” Scott has been warning us about giving Mother our full trust.)

Even when “Raised by Wolves” gets bogged down by its frenetic plots and a frigidly brutal vision of what lies ahead, the show seems exactly right about one thing: A whole new world should totally feel like a whole new world — from the untouched grit beneath one’s boots to a complete reordering of right and wrong. That’s the point of breaking free.

The past few months, The New York Times has coordinated a nationwide project to document the lives of Americans out of work. The study involved collaborating with 11 other local newsrooms around the U.S. The Messenger-Inquirer is the only newspaper from Kentucky in the collaboration. The resulting collection of stories was published Oct. 23, 2020, in the New York Times print edition and at nytimes.com/outofwork. The following list is the Messenger-Inquirer's recent local unemployment coverage; read more by clicking the "New York Times Project" header.

He was Eleanor Roosevelt's most powerful opponent

Civil rights was at the top of Eleanor Roosevelt's agenda