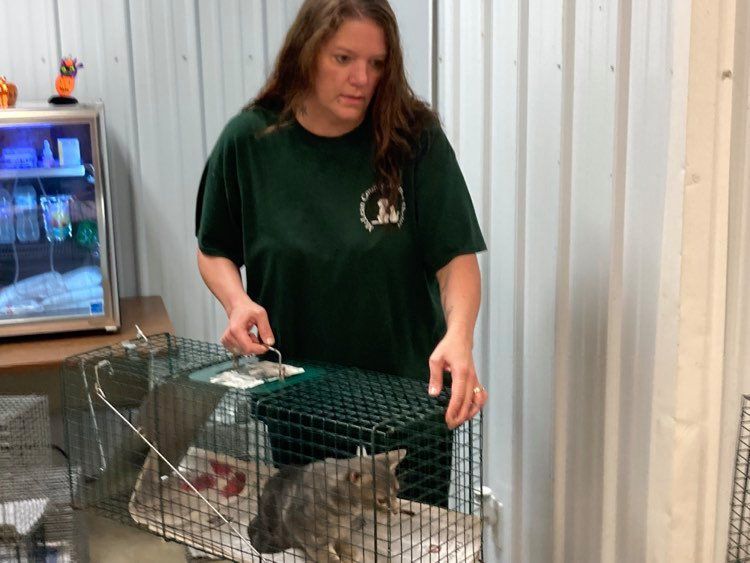 Whitney Sullivan, manager of the McLean County Animal Shelter, gets one of the cats prepared Tuesday morning to be transported to the Vanderburgh Humane Society in Evansville. 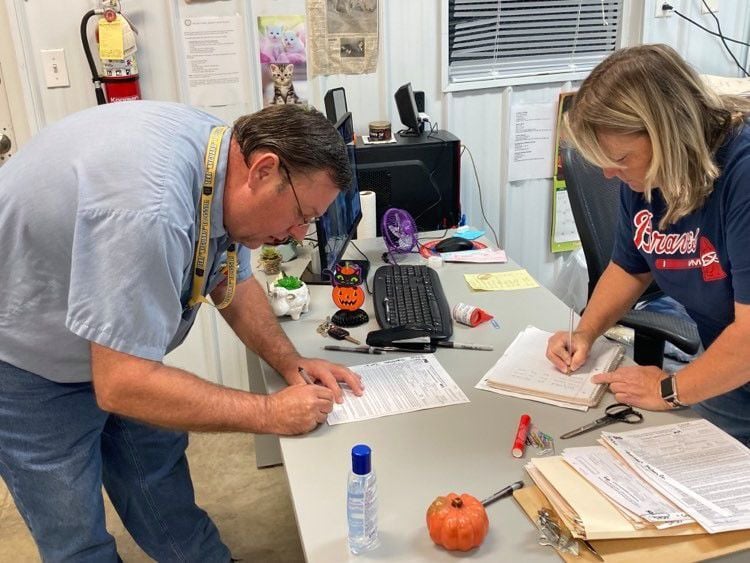 Scott Troutman, left, of Calhoun, fills out paperwork Tuesday morning while being assisted by Marisa Blades, a volunteer at McLean County Animal Shelter.

Whitney Sullivan, manager of the McLean County Animal Shelter, gets one of the cats prepared Tuesday morning to be transported to the Vanderburgh Humane Society in Evansville.

Scott Troutman, left, of Calhoun, fills out paperwork Tuesday morning while being assisted by Marisa Blades, a volunteer at McLean County Animal Shelter.

McLean County Animal Shelter is looking to get a handle on the ongoing stray cat population while also providing convenience for its clientele.

Through a $500 donation from the nonprofit organization Spay-A-Stray in Owensboro, the animal shelter held its first spay and neuter clinic for cats Tuesday morning, at which the cats received the surgery.

Pet owners, as well as residents who had found strays, were lined up at the shelter at 5:30 a.m. to take advantage of the service.

The influx of cats in the county has been and continues to be an issue.

“We’re hoping to get the cat population under control a little bit,” said Whitney Sullivan, the animal shelter manager. “Right now, we don’t have any empty cages at all. We even have cages stuck in places where we normally don’t put cages, just trying to fit more in here so people don’t get upset when we don’t take cats.”

Because the county’s shelter is not set up to perform the spay and neuter procedures, cats were transported to Vanderburgh Humane Society in Evansville, where they spent the night recovering before returning to the McLean County shelter Wednesday morning.

“They’ve done hundreds of thousands of cats,” said animal shelter volunteer Marisa Blade about the Evansville facility. “They’re a huge clinic, they’re state-of-the-art …. They’re a really nice facility. Even though it’s an overnight thing, and they’re gone … (owners) can have peace of mind knowing that (the clinic) is taking great care of them ....”

Cat owners were able to get their female and male pets fixed for $72 and $57, respectively.

An “outside cat package” for strays, similar to a Trap, Neuter, Release (TNR) program, is where feral cats are trapped, spayed or neutered, and then released back into the environment. Stray or outside cats were placed in a live trap, costing $55 for female cats and $57 for male cats. These cats also receive an additional booster shot.

“When you put them in a trap, we do the ear tip — which a lot of feral cats have,” Sullivan said. “That way, when they are released back, people will know that they have been spayed or neutered and to know to just leave them alone in their little colony. A lot of people will try to bring them into the shelter not knowing that they are already fixed….”

“This is to promote people to fix outside cats so that we don’t have shelters full of cats,” Blade said.

Low-income residents were also able to participate in the program. The county was able to supplement part of the fee so residents could have up to two cats fixed and receive a rabies vaccination for $15, as long as proof of need was provided, such as a food stamp card, disability info or past year’s tax return.

Sullivan and Blades said even though the announcement for the clinic was last minute on Oct. 8, they received appointments for 15 cats by Monday morning.

The spay and neuter program provides other benefits besides reducing populations over time.

“It also helps cut back on disease,” Sullivan said. “When you have a lot of tomcats that aren’t fixed and are fighting, they spread disease that way too.”

This type of program could also prevent unwanted kittens being “dumped” throughout the county.

“It’s so important, because animals get out of control,” said Scott Troutman, a Calhoun pet owner. “There’s too many of them. Whenever the shelter wasn’t open …, people would just bring animals to the gate and just drop them and leave them.”

While the county and shelter is on the right track, Sullivan is aware there is more work to be done.

“Of course, it’s going to take more than one clinic, but this is the only thing that we have a grant for right now,” Sullivan said. “But, we are looking to get more grants to have another one in the future.”