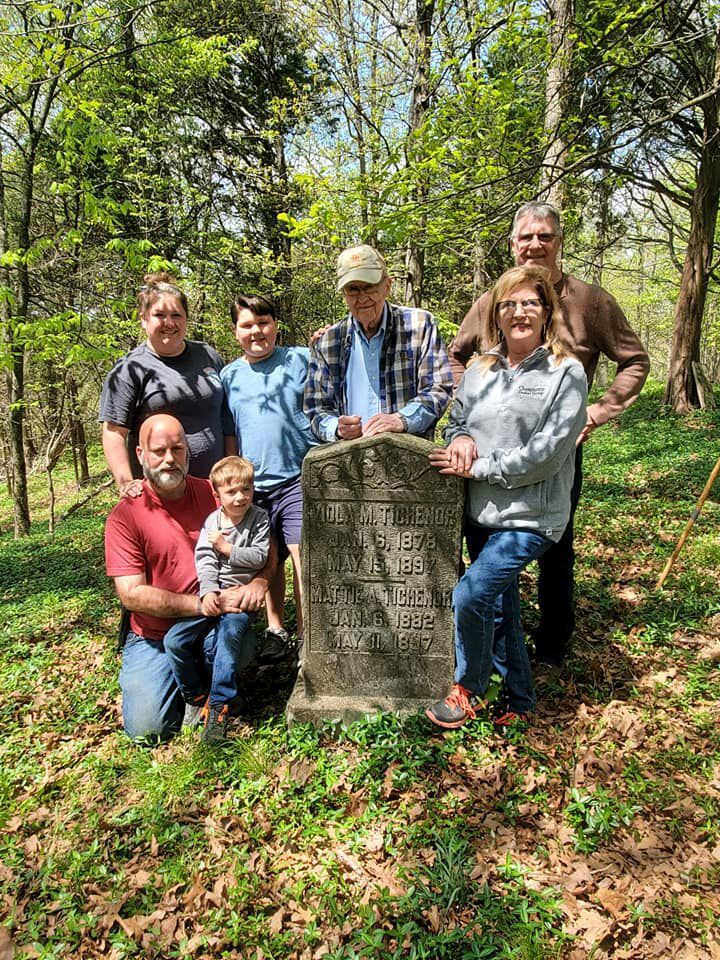 The Meggs and Miller families visit a family cemetery April 18. 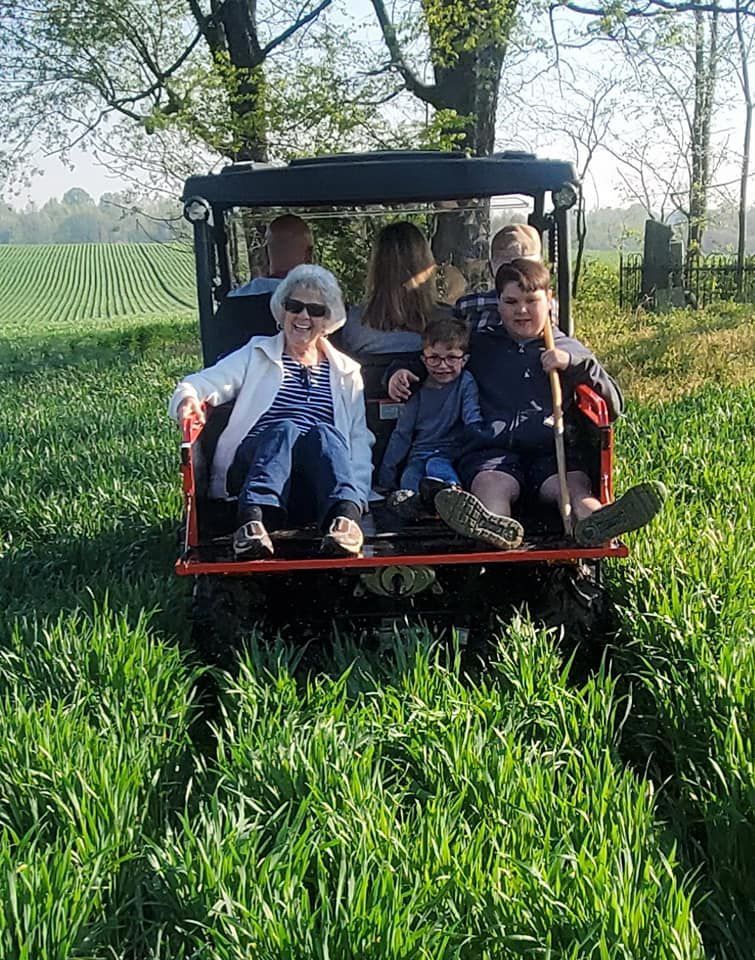 The Meggs and Miller families visit a family cemetery April 18.

Last year museum curator, Anita Austill, had the pleasure of spending part of a weekend showing the visiting Meggs family where two family cemeteries were located, and helped them as they cleaned up the overgrowth in those cemeteries. The visitors were Ashley Miller Meggs, her husband Adam, and their two young sons, who all live in Tennessee. At that time she hoped to return to McLean County in the future, and bring her grandfather, so that he could see where his grandfather (Daniel Miller) was buried.

On Sunday of last week they were able to do just that. Ashley and family returned, bringing her granddad, R.T. (Rollie Tichenor) Miller, Jr., and two of his children, Jamie Miller and Elizabeth Miller (Ashley’s mom). In Ashley’s words:

“Sunday Funday in Calhoun KY. We got to bring my grandfather to where his family came from in KY. Jamie and Elizabeth joined us for this trip, too. My grandfather got to visit the Miller Family Cemetery for the first time in 84 years! The last time he was here was for his grandfather’s funeral! We also took him to see the Family Research Center, where we got to see where one of his family members was a congressman (none other than Glover Cary). We ended our trip visiting the Tichenor Hills Cemetery. Big thanks to Anita Austill for leading us to our destinations! None of this would have been possible without your help!”

Per Anita, “My pleasure just to hang out with this family; they are all just awesome. Fun day.” Besides being our curator, Anita is no stranger to cemeteries, as she has added over 80,000 photos of headstones to the Find a Grave website. She can pretty much tell you about all of the local cemeteries, and how to get to them. In this case, she went with the Meggs and the Millers and showed them vs. giving directions.

Now, between Anita and another of our wonderful volunteers, Jennie Seymour, if one of them doesn’t know a person you’re asking about, the other one will. They are both blessings to the museum. What we don’t know something about, we research. So if you have any queries about the local area—just let us know!

When I’m researching for an article, I come across some interesting tidbits. The following paragraph falls into that category, and was found in the Nov. 9, 1928 McLean County News:

Unfortunate Accident — “A workman excavating in the cellar of the old Captain Ballantine home, said to be 94 years old, at Rumsey some days ago, observing that his pick struck something harder than the soil in which he was digging, and at the same time his olfactory organ getting a feint aroma that seemed to revive forgotten memories of a day long past, he made a careful examination and found that he had unwittingly almost committed a crime in breaking the neck off an old time “Pikes Peak” pint bottle and allowed its precious content, which was probably not less than 60 years old, “waste its sweetness” on the unappreciative soil. No language could express this workman’s regret over his loss.” (This home is now known as the Gatton House.)

The Museum and Treasure House are open Mondays, Wednesdays and Fridays, the Museum from 9 a.m. to 4 p.m., and the Treasure House from 10 a.m. to 4 p.m. To reach us at the Museum you can call 270-499-5033, or email us at info@mcleancountykymuseum.org. Our Facebook page is: McLean County KY History Museum & Regional Family Research Center. I wish everyone a great week!