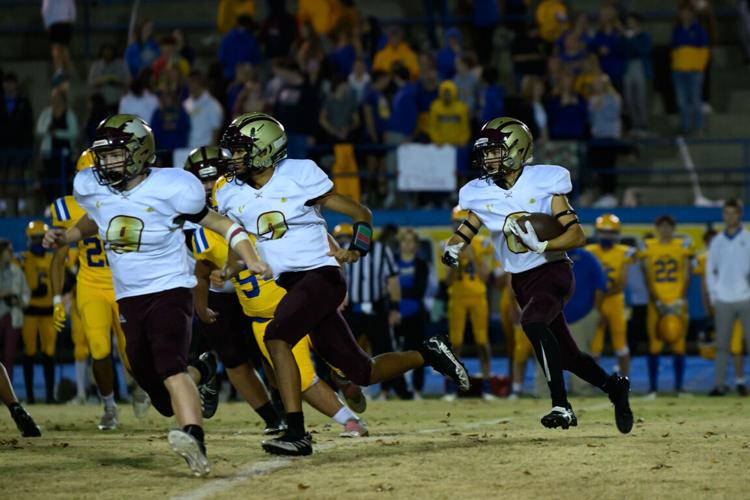 Will Taylor and Brodie Cline clear a path for Aden Bolden carrying the ball Nov. 4 at Tiger Stadium against Caldwell County. 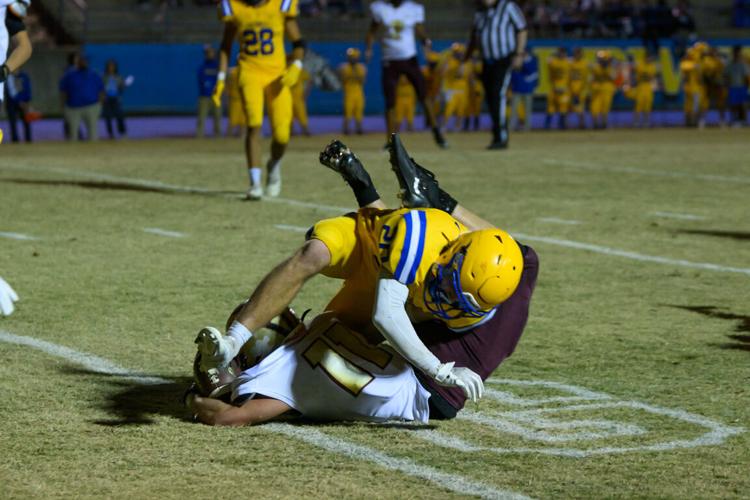 Zach Clayton bent, but did not break, while carrying the ball for McLean County on Nov. 4 at Caldwell County. 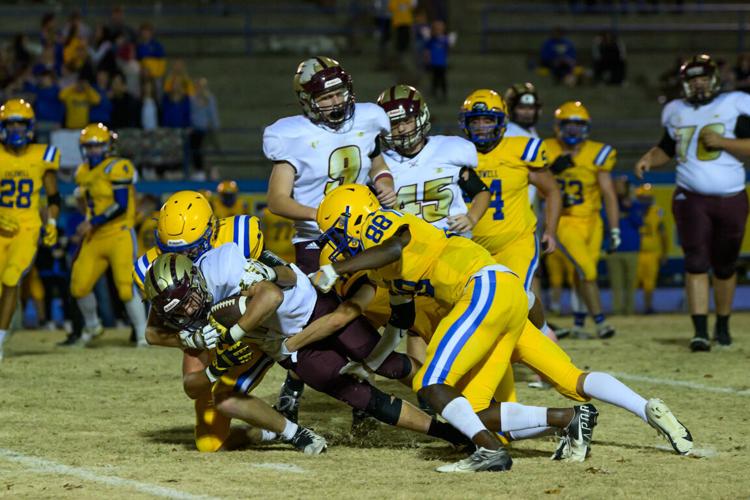 Zach Clayton digs in for more yards, wrapped up by several defenders, as Will Taylor and Cole Crumbaker come in to assist against Caldwell County on Nov. 4. 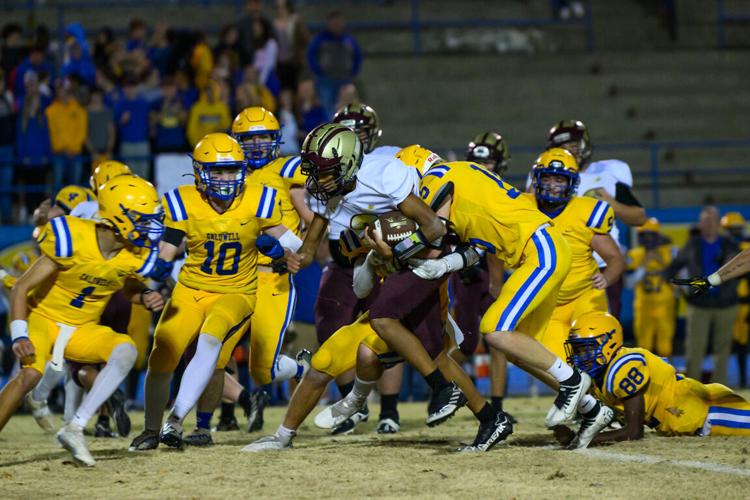 Brodie Cline takes a keeper through a pack of Tigers on Nov. 4 in Princeton.

Will Taylor and Brodie Cline clear a path for Aden Bolden carrying the ball Nov. 4 at Tiger Stadium against Caldwell County.

Zach Clayton bent, but did not break, while carrying the ball for McLean County on Nov. 4 at Caldwell County.

Zach Clayton digs in for more yards, wrapped up by several defenders, as Will Taylor and Cole Crumbaker come in to assist against Caldwell County on Nov. 4.

Brodie Cline takes a keeper through a pack of Tigers on Nov. 4 in Princeton.

The McLean County High School football team advanced to the 2nd Round of the KHSAA Class 2A Playoffs after a 15-7 win over Caldwell County on Nov. 4. The Cougars are 9-2 on the season.

McLean County had 60 rushes for 322 yards and two touchdowns. They were 1-5 passing for 27 yards. The Cougars had 19 first downs.

Zach Clayton led McLean County on the ground with 118 yards on 26 rushes, scoring 14 of the team’s 15 points. Elijah Baldwin had 85 yards on just eight trips, and Brodie Cline racked up 79 yards.

The Cougars held Caldwell County to only 205 yards of total offense. The Tigers managed only seven first downs and had just 27 offensive plays in the entire game.

Clayton also led the McLean County defense with six tackles and an interception. Ayden Rice had four stops in the game. Evan Ward and Aden Bolden both had three tackles. Cline, Baldwin and Will Taylor each added two tackles. Taylor had a sack and currently leads the state in sacks for Class 2A with a total of 10.

The initial kickoff went to the Cougars and they retained possession for all but five plays of the first quarter. The offense was getting geared up again with another series as the game rolled into the second quarter with no points on the board for either team.

McLean County began to move steadily downfield and Cline completed a 27-yard pass to Baldwin to bring the ball to first-and-goal on the 9-yard line. Clayton carried for eight yards and then scored on the next snap. A successful conversion by Clayton put the Cougars up 8-0 with 8:21 left in the half.

A short series by the Tigers ended in a punt, and Baldwin opened up with a big run up the far sideline for a 30-yard gain. Cline and Clayton took turns carrying the ball before Clayton ran it in again at the buzzer to end the half. Jacob Capps added a successful kick and the score was 15-0 at intermission.

Caldwell County got the ball to start the second half and soon moved into Cougar territory. A runner broke away and was headed toward the end zone, but a touchdown-saving tackle by Bolden and Kamden Walters stopped him on the 11-yard line. Reece Stevens made a quick stop on the next play before Taylor delivered a sack for a loss of four. The next two passes fell incomplete, defended by Ward and Cline, resulting in a turnover on downs.

The Cougars took over on their own 14-yard line and Clayton took several trips with the ball. Cline, Bolden and Rice helped bring the ball into Caldwell County territory early in the fourth quarter before Baldwin went on a 22-yard scamper that ended just outside the red zone.

Taylor ran up the middle with several Tigers on his back for a nine-yard gain, but the series later ended with a turnover on downs. Caldwell County completed a big pass play to finally get on the board midway through the final quarter and a successful kick made it 15-7.

The Cougars moved into Tiger territory again with a 24-yard run by Baldwin and began to close in on the end zone with under a minute to play. McLean County failed to convert on a fourth down and Caldwell County took over again with just 21 seconds left on the clock.

The Cougar fans came to their feet and the sound of cowbells filled the air as the defense took the field. The Tigers moved the chains as the tension grew and the seconds ticked away. With one second left on the clock and a final play their only chance, Caldwell launched a big pass from the McLean 36-yard line. All eyes followed the ball as it made a high arc in seemingly slow motion. Cougar defenders came from all directions and the ball was tipped by Baldwin and again by Cline before Clayton secured the interception and slid to the ground, sealing the 15-7 victory for McLean as the field and the stands erupted in celebration.

“This was a good, tough win against a very good Caldwell team,” said defensive coordinator Justin Cook. “Our defense bent a little, but never broke. We limited Caldwell to 27 offensive plays, only nine in the first half. Offensively, our line did a good job of opening holes and helped us churn out over 300 rushing yards.”

Head coach Zach Wagner added, “We are excited to be amongst the only 16 teams left in Class 2A still playing.”

The Cougars will travel to Steele Stadium on Friday, Nov. 11, to face the Owensboro Catholic Aces for the 2nd Round of the playoffs. Kickoff is at 7 p.m.

I struggle to find a healthy balance in life, says Keke Palmer

Lewis Capaldi: My mansion is a money pit!