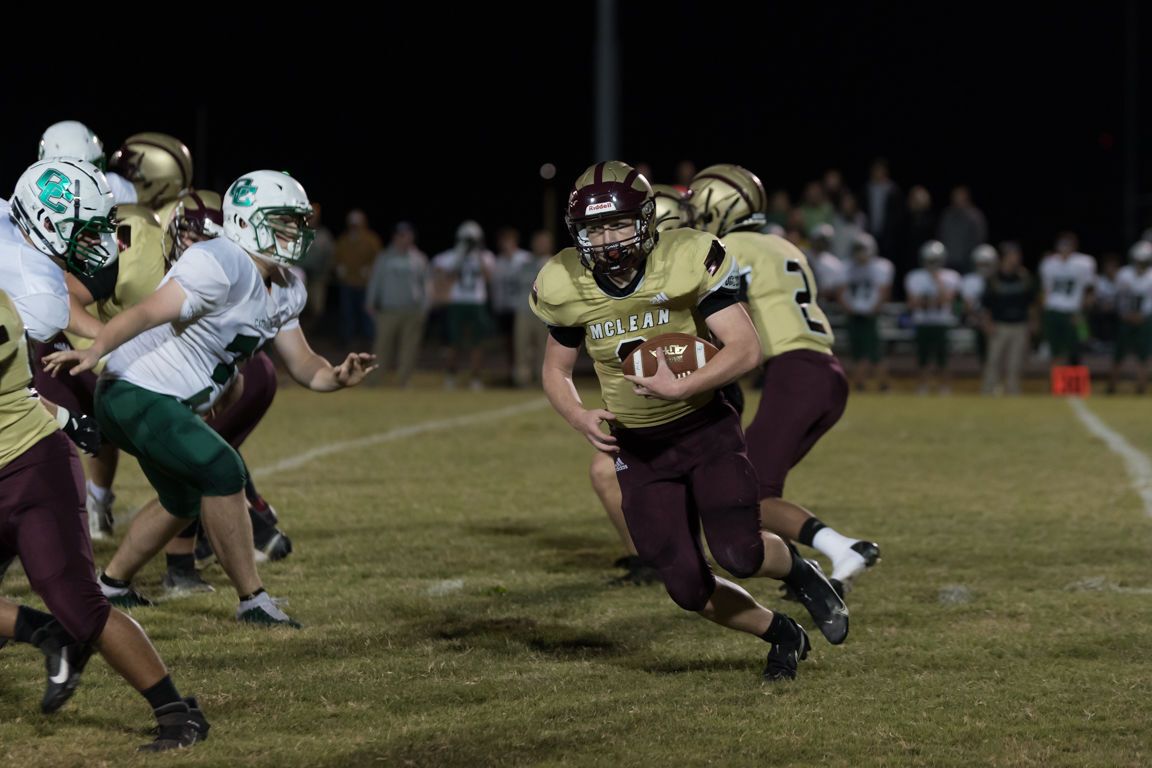 Will Taylor carries the rock against Owensboro Catholic at Paulsen Stadium on Oct. 22. 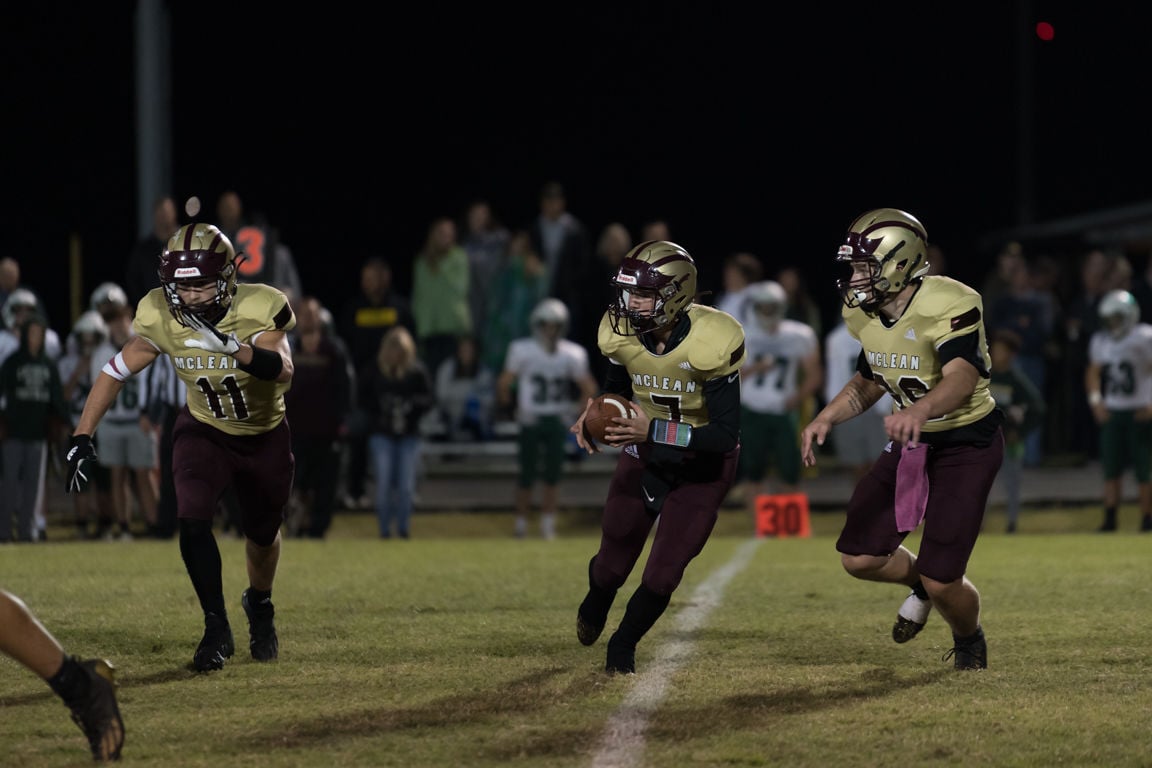 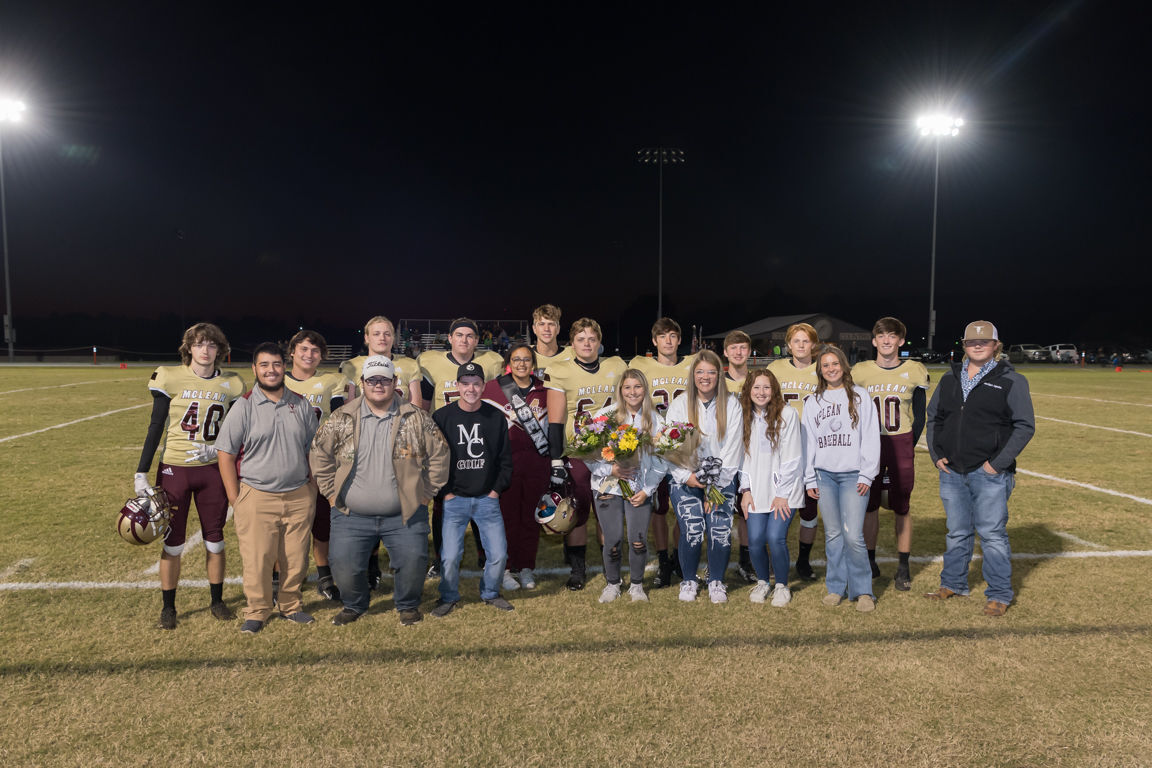 Will Taylor carries the rock against Owensboro Catholic at Paulsen Stadium on Oct. 22.

The McLean County High School football team hosted Owensboro Catholic at Paulsen Stadium on Oct. 22. The Cougars were shutout by the Aces 46-0.

McLean County had 38 rushes for 186 yards. Quarterback Brodie Cline was 2-for-15 passing for 13 yards. Lucas Mauzy led the Cougars with 73 yards and Will Taylor added 48 yards on the ground.

Zach Clayton and Will Taylor both led the McLean County defense with seven tackles each including a sack. James Haerle had six stops and Wes Wells had five.

The initial kickoff went to the Aces and Will Taylor stopped the return. Owensboro Catholic quickly moved into Cougar territory and a couple passes fell incomplete before Haerle made a tackle for a loss of three. The Aces scored on the next play and a successful kick put them on the board 7-0 early in the first quarter.

Haerle returned the next kickoff 15 yards and Cline went right to work with a pass to Dame for a gain of three. Clayton and Mauzy moved the ball before Cline went back to Dame for a 10-yard pass that brought the ball into Aces territory.

Mauzy moved the chains again and the Cougars were on the edge of the red zone after a penalty against Owensboro Catholic. Incomplete passes and penalties for the Cougars set them back and they ended the series with a turnover on downs.

The McLean County defense buckled down and a couple Aces passes fell incomplete before a sack by Clayton backed them up six yards. Catholic ended the series with a punt, but regained possession with an interception a few plays later as the game rolled into the second quarter.

Caleb Stein pushed a runner out of bounds before Nolan Blade delivered a tackle in the backfield for a loss of seven yards. The Aces scored on the next play and a successful kick made the score 14-0.

The Cougars worked hard in what was left of the half with a kickoff return by Haerle for 18 yards, a run to the near side and stretch out for an 11-yard gain by Taylor, a sack by Taylor for a loss of 12, and a tackle by Ayden Rice for a loss of eight.

Dame blocked a point after kick attempt and scooped up a big pass from Cline that he took all the way to the house, but a penalty cost McLean the touchdown.

Owensboro Catholic capitalized on each possession and scored twice more in the first half, although they did not manage either kick attempt. The half ended with the Aces out front 26-0.

Elijah Baldwin returned the second half kickoff with a spinoff after taking a hit that gained another few yards for a total of 23, but the Cougar offense struggled to make any headway.

Owensboro Catholic scored on their next two possessions despite several passes defended successfully by Baldwin. Wes Wells put a stop to the conversion attempt on the last touchdown and the score was 40-0 with 7:18 left in the third quarter.

Clayton and Haerle had some good runs for big gains, but penalties against the Cougars set them back again. Stein and Wells tackled a receiver short of a first down, but the Aces scored again on a later play.

A tackle by Whit Searcy stopped the conversion attempt and the score was 46-0 with 7:13 left in the final quarter.

Baldwin returned the next kickoff 19 yards and Mauzy moved the ball before Taylor wen to the far side for a breakaway run that gained 25 yards and set the Cougars up inside Aces territory. Mauzy moved the chains again, but a fumble was recovered by Owensboro Catholic and they took a knee to seal the shutout win 46-0.

“We had too many mistakes that thwarted offensive drives and put us behind the chains,” said head coach Zach Wagner. “We strung together a couple defensive plays, but had blown assignments that resulted in big plays. When playing against good teams, both of those things cannot happen.”

The Cougars will travel to Hopkins County Central to take on the Storm for their final regular season game on Friday, Oct. 29. Kickoff is at 7 p.m.