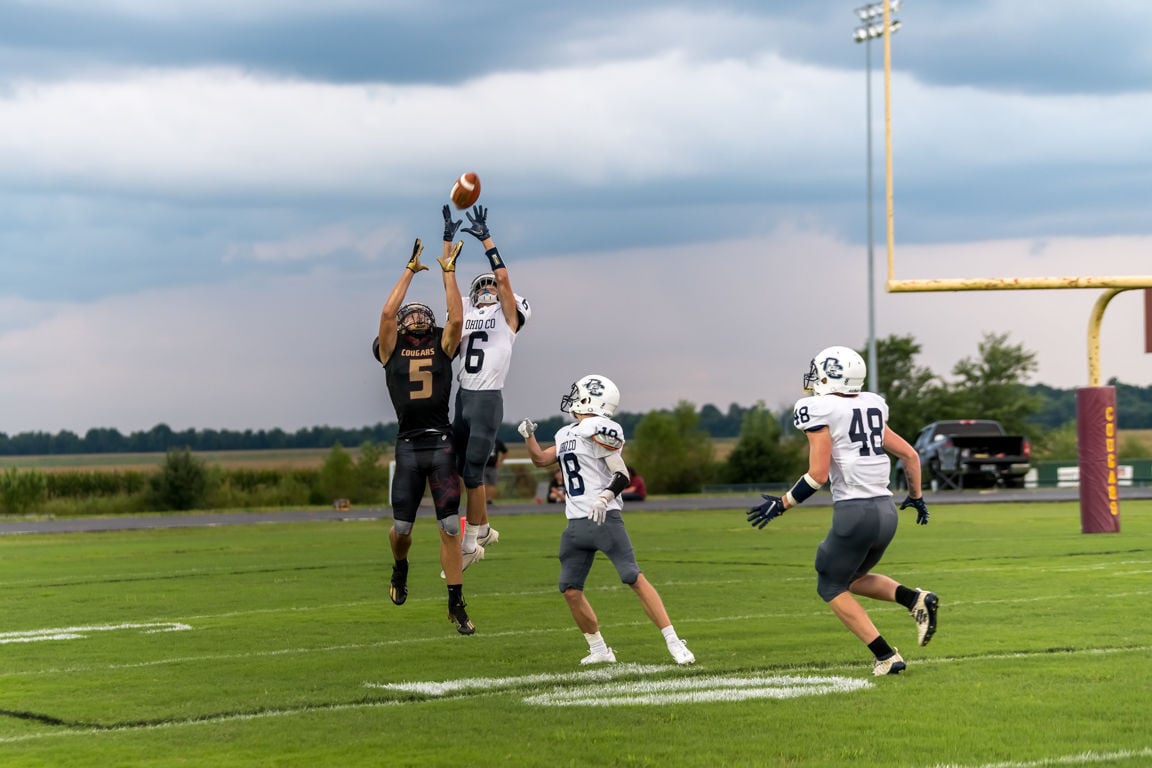 McLean County’s Brady Dame battles an Ohio County defender to make a catch in the Cougars’ 38-30 win over the Eagles on Friday night in Calhoun. 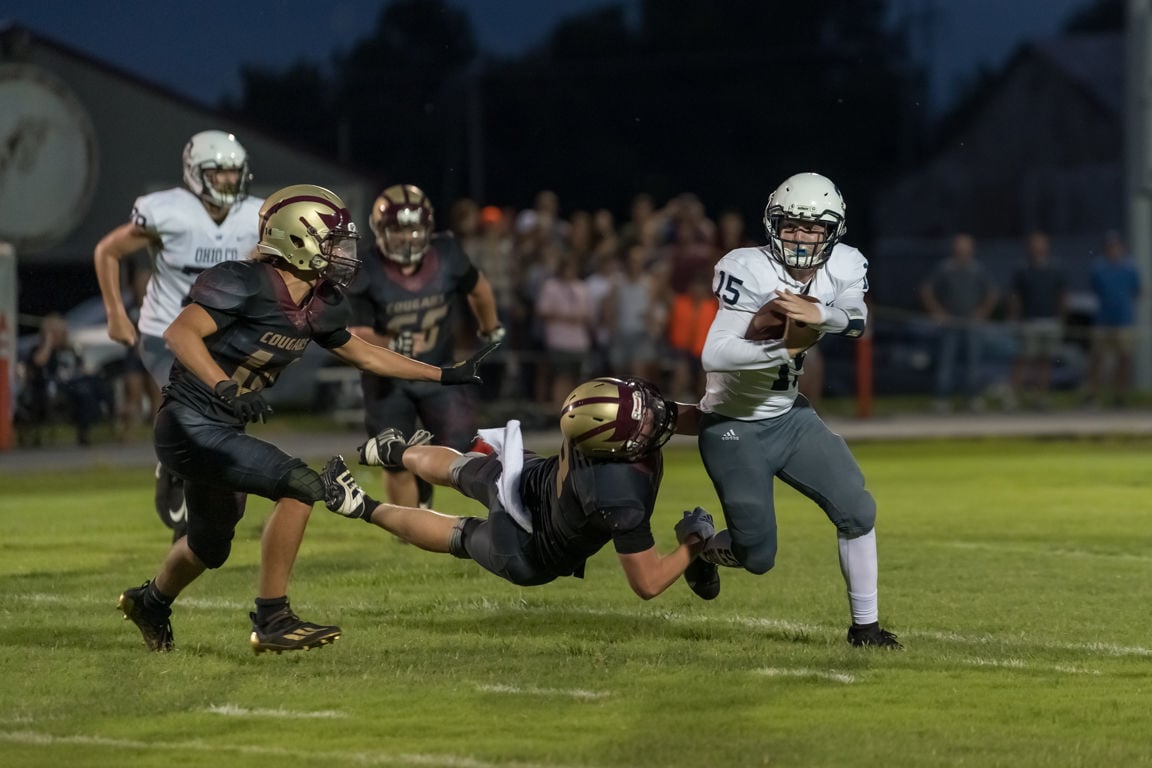 McLean County’s James Haerle makes the initial hit on the Ohio County runner as teammate Elijah Baldwin comes in to assist on he tackle. The Cougars defeated the Eagles 38-30 on Friday night at Calhoun. 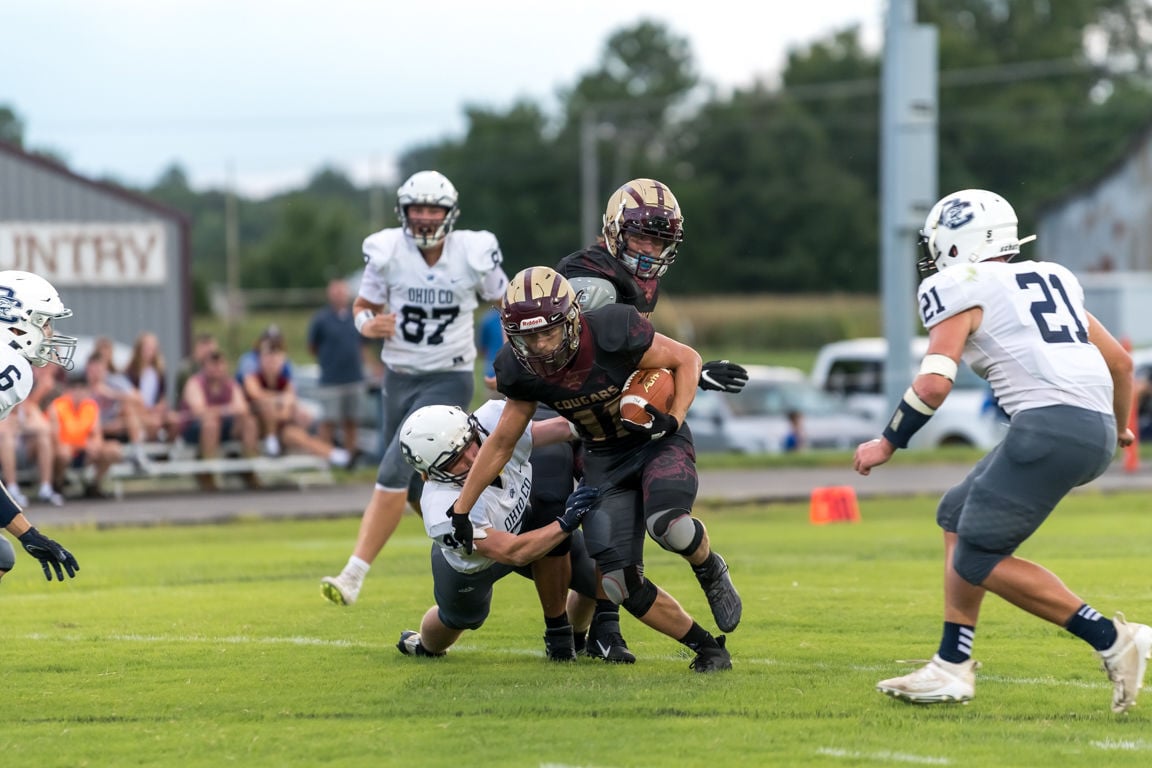 McLean County’s Zach Clayton carries the ball during the Cougars’ 38-30 win over Ohio County on Friday night at Calhoun. 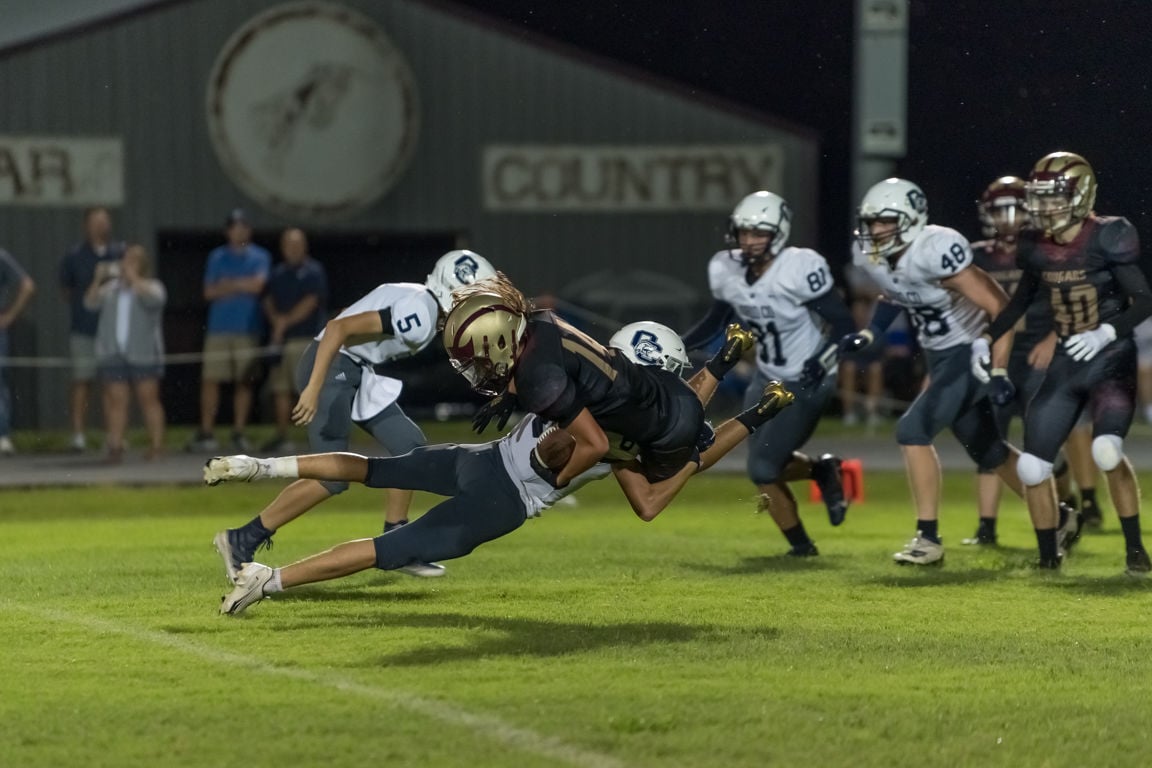 McLean County’s Elijah Baldwin is tackled by an Ohio County defender in the Cougars’ 38-30 win over the Eagles on Friday night at Calhoun.

McLean County’s Brady Dame battles an Ohio County defender to make a catch in the Cougars’ 38-30 win over the Eagles on Friday night in Calhoun.

McLean County’s James Haerle makes the initial hit on the Ohio County runner as teammate Elijah Baldwin comes in to assist on he tackle. The Cougars defeated the Eagles 38-30 on Friday night at Calhoun.

McLean County’s Zach Clayton carries the ball during the Cougars’ 38-30 win over Ohio County on Friday night at Calhoun.

McLean County’s Elijah Baldwin is tackled by an Ohio County defender in the Cougars’ 38-30 win over the Eagles on Friday night at Calhoun.

The McLean County High School football team opened the 2021 season at home in Paulsen Stadium with a 38-30 win over Ohio County on Aug. 20. The Cougars amassed 437 yards of total offense while holding the Eagles to just 251.

James Haerle led the Cougars on both sides of the ball with 19 carries for 106 yards and nine tackles. Haerle dominated in the backfield with 2.5 of the team’s four sacks, and he was responsible for 3.5 of the team’s seven tackles for a loss. Haerle also had a fumble recovery.

Lucas Mauzy followed with 16 carries for 104 yards, scoring three of the Cougar touchdowns. Zach Clayton had seven tackles in the contest, and Ayden Rice totaled six.

The opening kickoff went to McLean. The opening play had Clayton take the snap, then flip it to Cline, who drew back for a 30-yard pass to Elijah Baldwin that brought the ball to midfield. Baldwin, Clayton and Mauzy moved the ball before Cline launched a 26-yard pass to Dame. Baldwin then crossed the goal line from four yards out, and Cline carried in the conversion to put the Cougars up 8-0 with 5:31 left in the first quarter.

Ohio County answered back immediately. The McLean offense then went back to work with Haerle, Mauzy and Baldwin carrying the pigskin before Cline launched another air assault with a 15-yard pass to Dame, followed by a 17-yard repeat that brought the ball just outside the 10. Mauzy busted up the middle and bulldogged his way into the end zone to reclaim the lead for the Cougars early in the second quarter. Dame jumped up in the air and snagged the ball with one hand for the conversion pass, and McLean was back on top 16-8.

The Eagles had to work harder for their second touchdown, with several stops by Haerle, Nolan Blade, Cameron Dukes, Baldwin and Rice, but managed to knot the game up at 16 with 4:07 left to play in the half.

Clayton had a big run up the near sideline that gained 37 yards, as the Cougars narrowed the gap to the goal line, but time ran out and the score remained 16-16 at the half.

The second-half kickoff went to Ohio County, with Haerle hot on the trail of the ball. Haerle delivered a tackle for a loss of seven before following with a sack and forced fumble that cost the Eagles another 14 yards and brought possession back to the Cougars deep in Ohio County territory. Clayton covered half the distance to the end zone before Mauzy finished it off with a 13-yard scoring play. A successful conversion by Haerle bumped McLean out front 24-16.

The Eagles tied it up again halfway through the third quarter, and Dame returned the next kickoff, zigzagging up the field for 32 yards. Haerle and Mauzy moved the chains a few times before Cline sailed a 10-yard pass to Clayton to bring the ball just outside the red zone. Mauzy and Haerle narrowed the gap again before Haerle took a tackle, but still managed to twist and stretch out to lay it across the goal line with 1:10 left in the third.

Jacob Capps had a good boot for the next kickoff, and the return ran smack into a brick wall called Whit Searcy. The Eagles got away on the next run, but Clayton ran the ball carrier down from behind and stopped him on the 5-yard line. Ohio County scored at the buzzer to wrap up the third with another tie, 30-30.

The final quarter was a battle, as both teams struggled to make their way to the end zone amid a flurry of fumbles and punts as the clock ticked. The Cougars snuck into Eagle territory and buckled down at fourth and inches to keep the offense alive. Haerle pushed through and then some to secure the first down and maintain possession. Mauzy closed in on the goal line with a couple of runs before punching it across from four yards out. Haerle then carried in the conversion to put McLean up 38-30 with just 57 seconds remaining on the clock.

The Cougar defense was determined with Cole Crumbaker and Clayton stopping the next kickoff after very little return. Mauzy made a quick tackle before Haerle and Noah Coleman teamed up for a sack with a loss of four yards. Ohio County faced fourth-and-11 with just 5.5 seconds to play. A big pass was completed and headed toward the end zone, but Cline zeroed in on the ball and made the tackle that ended the game, sealing the 38-30 win for the Cougars.

Head coach Zach Wagner saw several mistakes that need to be cleared up, but stated he is “very proud of how we finished with grit.”

This week’s Breckinridge County game was cancelled by the Tigers, so the Cougars will travel to Washington, Indiana, to face the Hatchets at 6 p.m. central time Saturday, Aug. 28.