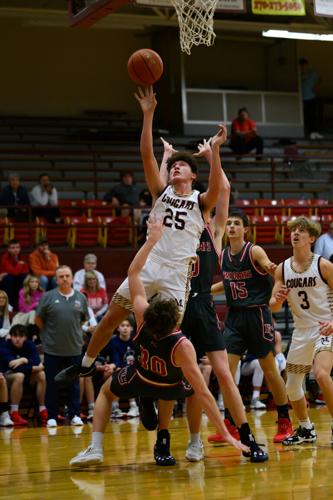 Gunnar Revelett goes up against Edmonson County defenders while Jaxon Floyd stays close by during the Jan. 17 game. 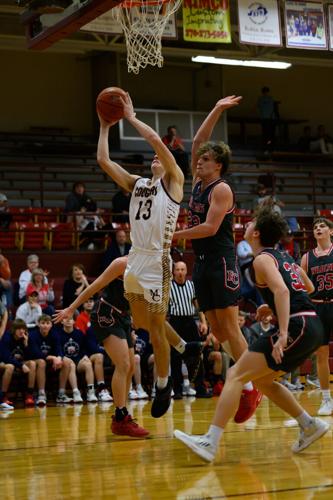 Evan Ward goes up for the shot against Edmonson County on Jan. 17. 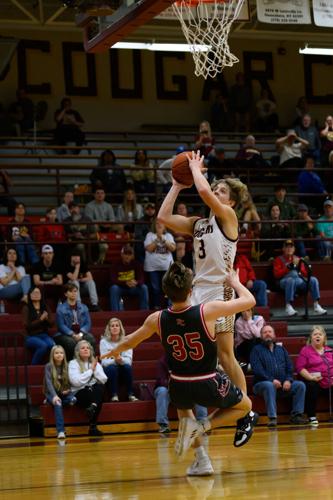 Jaxon Floyd goes up for a basket against an Edmonson County player on Jan. 17. 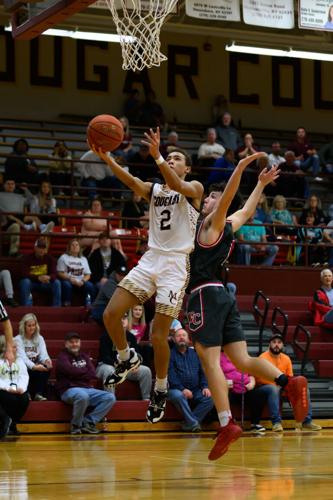 Brodie Cline goes up for the shot against Edmonson County on Jan. 17.

Gunnar Revelett goes up against Edmonson County defenders while Jaxon Floyd stays close by during the Jan. 17 game.

Evan Ward goes up for the shot against Edmonson County on Jan. 17.

Jaxon Floyd goes up for a basket against an Edmonson County player on Jan. 17.

Brodie Cline goes up for the shot against Edmonson County on Jan. 17.

The McLean County High School boys basketball team is currently 14-6 on the season and now holds the record for the most wins of any four-year period with 74. The previous record of 73 was from 1982 to 1985.

The Cougars had a tough battle against Edmonson County at home on Jan. 17 that went into double overtime before McLean County finished off with a 58-56 win. The Cougars hosted Ohio County for another fierce contest on Jan. 20, but came up short 54-51.

The first quarter against the Wildcats at home last Tuesday stayed close until Declan Scott assisted Cruz Lee with a long shot from outside the arc to pull ahead 13-9 at the buzzer.

The Cougar defense then knocked the ball away and got it to Lee with a twisting, behind-the-back catch on the run before making a successful layup and drawing a foul. Lee netted the free throw and put McLean up by seven early in the second quarter.

Edmonson County fought back to tie the game at 24 by the half and both teams pounded the boards in the third quarter with the Cougars ahead 40-34 to start the final period.

The Wildcats went on a run to edge out front before Evan Ward assisted Jaxon Floyd with a long three-pointer. The score was tied again with 3:41 left in regulation. Both teams battled for the basket, but came up dry and the game went into overtime 43-43.

McLean County fell behind by five before Floyd pulled up with a shot from way outside. A put back from Revelett gave the Cougars the lead. Evan Ward then grabbed a rebound and started to fall out of bounds, but managed to toss an assist to Cline with a basket that made it 51-48 with 42 seconds on the clock. A successful three-pointer by Edmonson County sent the game into a second overtime knotted up at 51.

Excitement was high as the next tipoff went to McLean and Cline immediately took it to the basket. Foul shots by Revelett gave the Cougars a four-point lead, but the Wildcats snuck out front by one again with only 20 seconds left to play. McLean County brought the ball inbounds and made a few quick passes before Floyd assisted Lee with a three-pointer from the corner as the buzzer sounded and the crowd erupted, sealing the double overtime victory 58-56.

Gunnar Revelett led the Cougars with a double-double from 18 points, 13 rebounds, an assist and a block. Jaxon Floyd had a couple threes with a total of 15 points, five rebounds and two each in steals and assists.

“We gutted out a nice win against Edmonson County,” said head coach Darren Lynam. “It didn’t look good at all when we went down five points early in the first overtime. We didn’t play the exact best, but played well enough against a quality team to win the game. Cruz hit a big shot to win it. As I told the guys afterwards, sometimes you have to find a way to win on a night you are supposed to win and you aren’t at your best.”

McLean County was up by a basket at the end of the first quarter against Ohio County at home last Friday. The Eagles then jumped out front 30-26 by the half and were leading 43-37 to start the final quarter.

Jaxon Floyd assisted Brodie Cline with a three-pointer to immediately cut the deficit in half. Evan Ward then turned along the baseline and assisted Gunnar Revelett with a basket that narrowed the gap to a single point.

Free throws from Revelett and a three from Cruz Lee kept the score within one before Cline sank a couple foul shots to tie the game at 49 with 1:41 left to play.

Ohio County pulled ahead by one, but Cline assisted Revelett at the basket to snatch the lead again 51-50 with 35 seconds on the clock. Foul shots in the final moments gave the Eagles a 54-51 win over McLean.

Gunnar Revelett led the again Cougars with 17 points, three rebounds and an assist. Brodie Cline had a couple three-pointers with a total of 12 points, two each in rebounds and assists along with three steals.

Jaxon Floyd also had 12 points, three assists and a steal. Cruz Lee had five points, two boards, four steals and an assist. Declan Scott sank a three-pointer. Will Taylor had a basket and a board. Evan Ward had a rebound, an assist, a steal and a block.

“We were pretty solid the whole way through,” shared Lynam. “They are very tough and arguably the best team in the 3rd Region. Their length can really give teams trouble. We were right there at the end, but just came up a play short. Hopefully, we will get another shot at them in the District Finals.”

The McLean Clinic sees more than 2.5K visits a year

The McLean Clinic sees more than 2.5K visits a year

Ryan Reynolds: Wrexham adventure is greatest experience of my life

Paul Mescal has a tomato phobia