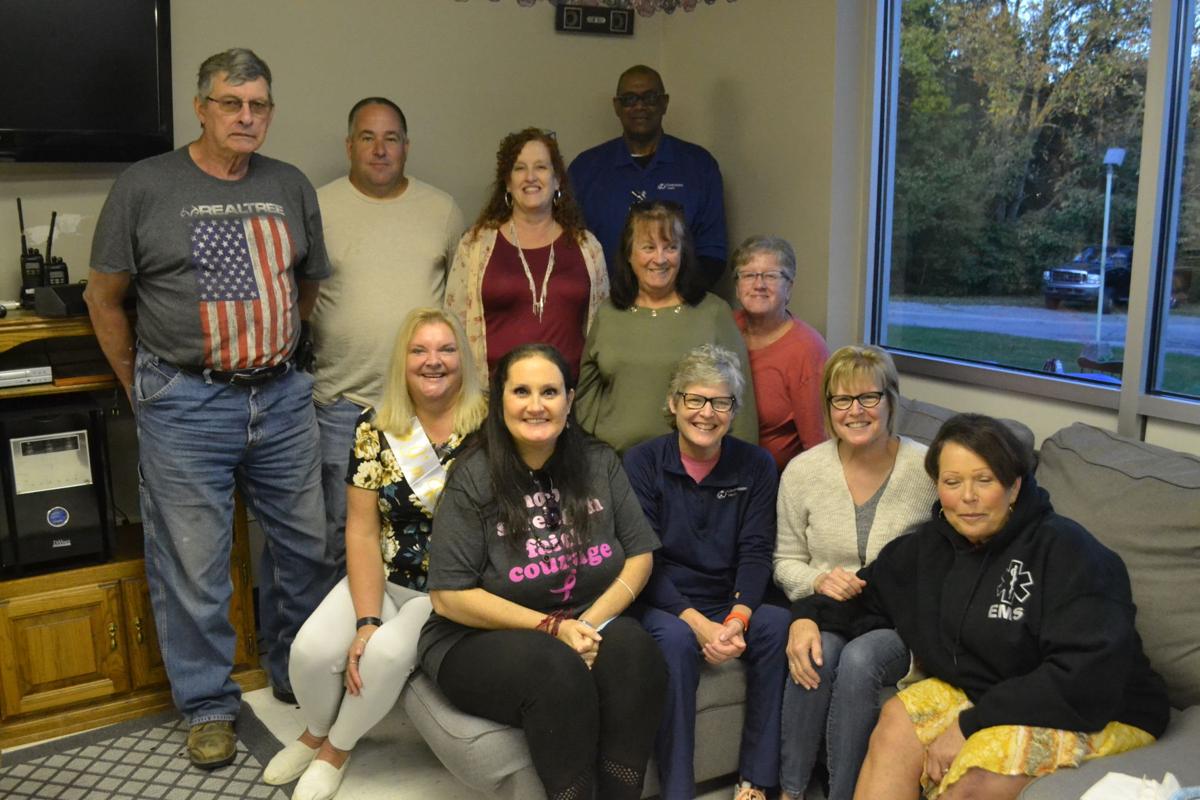 Marietta Worth, bottom left, with former paramedics and EMS staff members at her retirement party at McLean County EMS facility in Calhoun on Oct. 21. 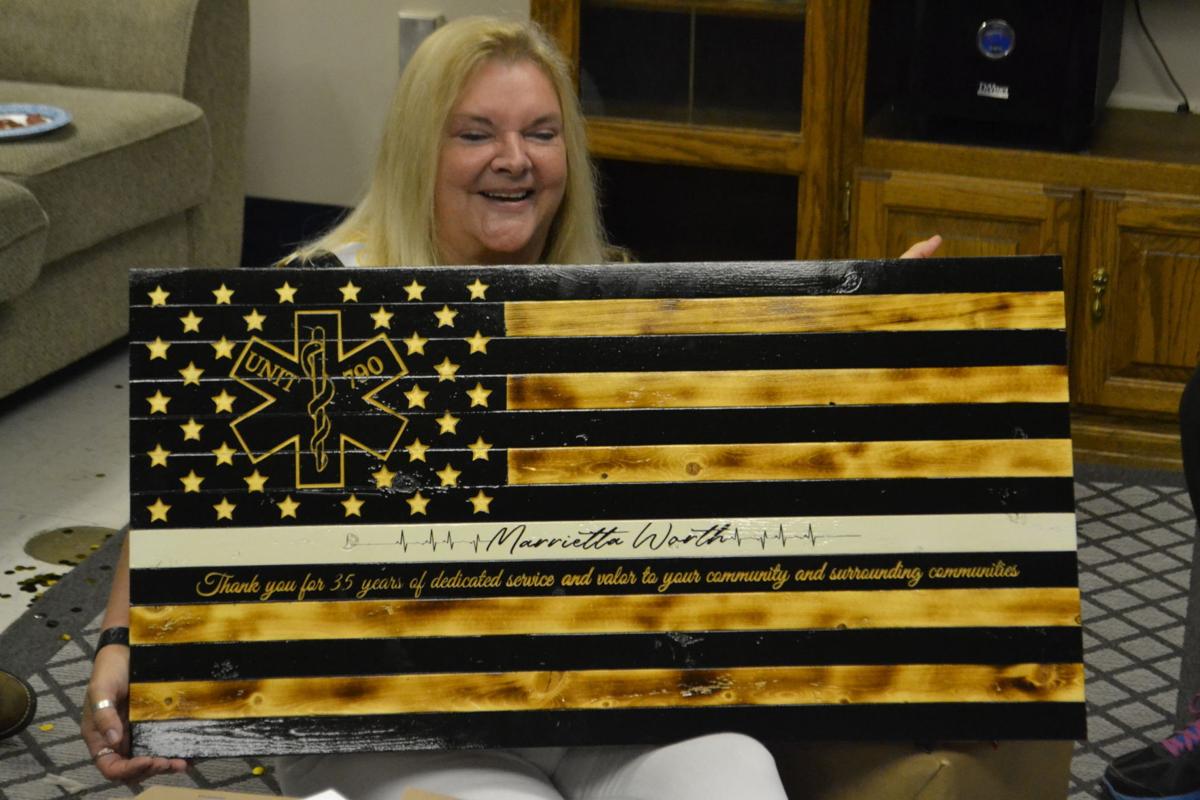 Marietta Worth, McLean County EMS director, is pictured with a gift from her EMS staff at her retirement party at EMS headquarters in Calhoun on Oct. 21. 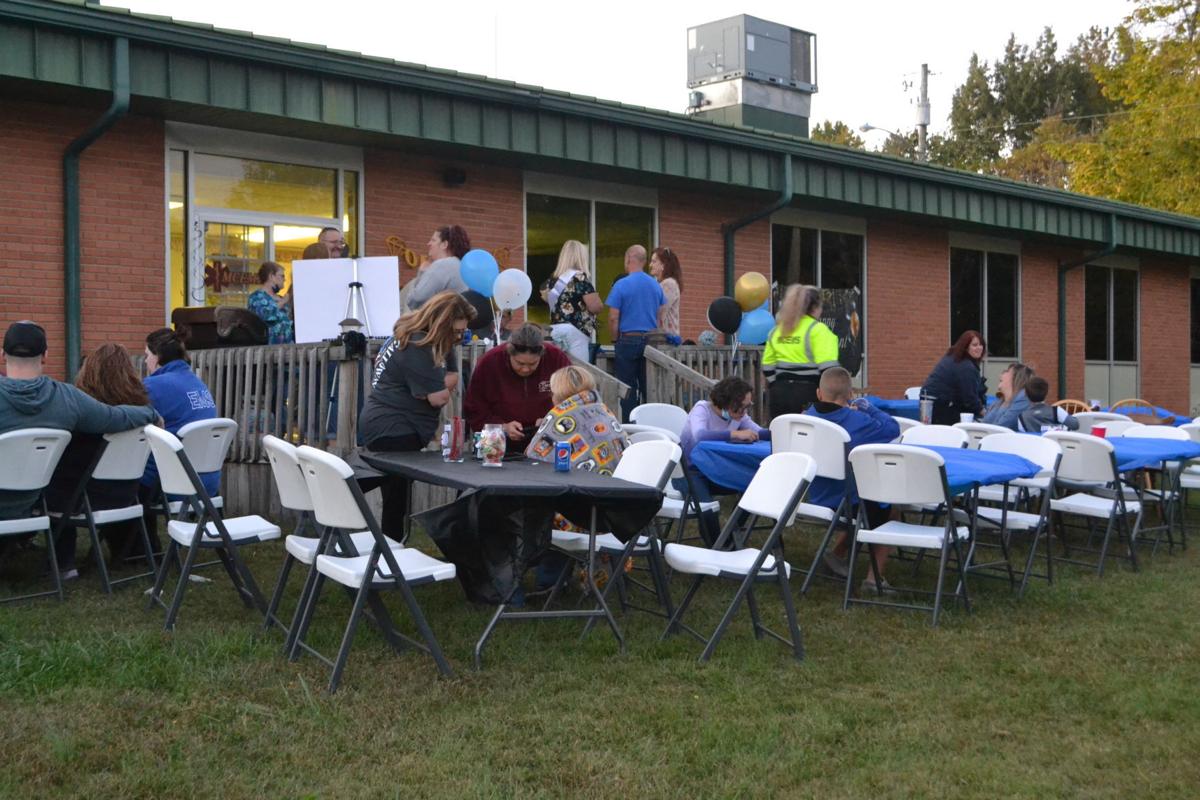 Friends, family, current and former EMS paramedic and staff members were in attendance at Marietta Worth’s retirement party at the McLean County EMS facility on Oct. 21. 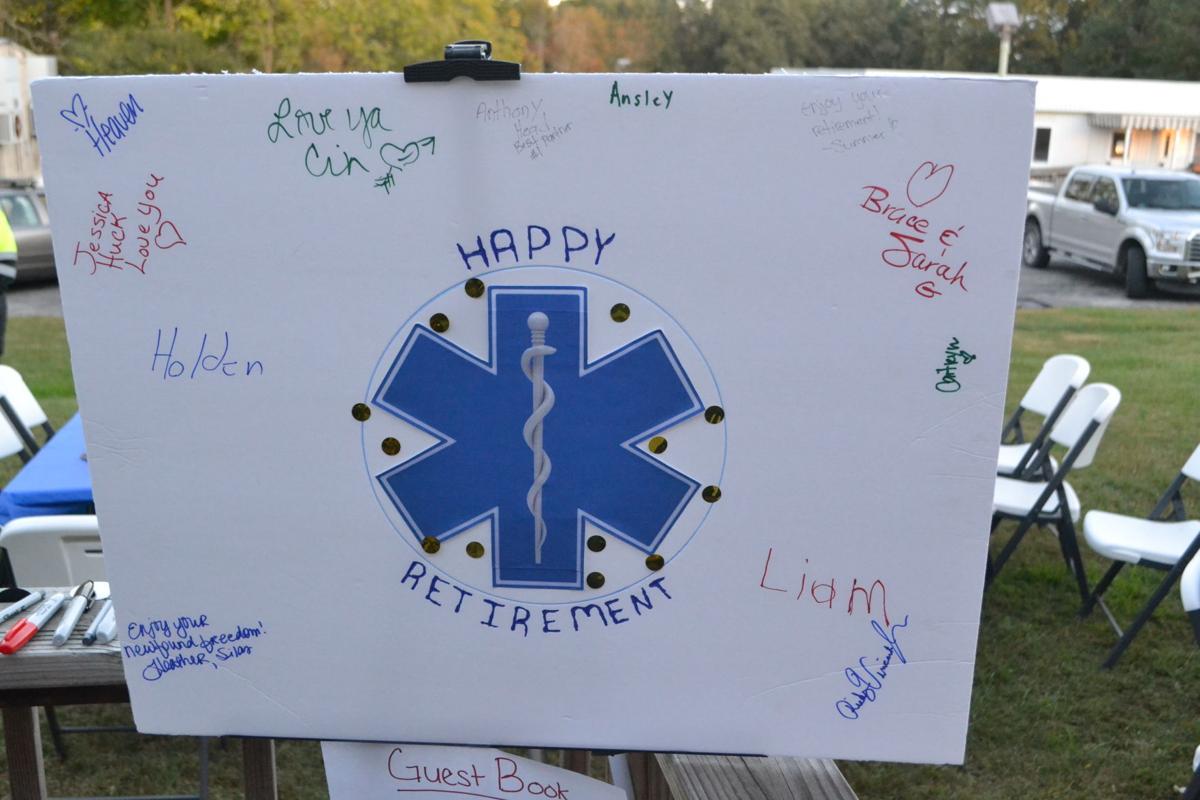 A guest book, signed by a number of attendees, to send Marietta Worth well wishes on her retirement after 35 years of EMS service.

Marietta Worth, bottom left, with former paramedics and EMS staff members at her retirement party at McLean County EMS facility in Calhoun on Oct. 21.

Marietta Worth, McLean County EMS director, is pictured with a gift from her EMS staff at her retirement party at EMS headquarters in Calhoun on Oct. 21.

Friends, family, current and former EMS paramedic and staff members were in attendance at Marietta Worth’s retirement party at the McLean County EMS facility on Oct. 21.

A guest book, signed by a number of attendees, to send Marietta Worth well wishes on her retirement after 35 years of EMS service.

Marietta Worth, director of McLean County Emergency Medical Service, will soon retire after a collective 35 years of service.

Friends, family, and EMS personnel from the county and beyond came out to McLean County EMS’ facility on Oct. 21 to honor Worth’s dedication to the community with a retirement party.

Worth reflected on her experience as director as overall positive.

“In the directing chair — it’s been a mixed blessing,” Worth said. “I love my people; I love McLean County; I love the employees — I love all of that. Sometimes, politics is difficult to work with. But, we make due because we love what we do.”

Worth became the director in April 2016, replacing longtime director Brian Short. Worth has been a part of the county EMS service on-and-off since 2003, before taking a position with the Air Evac Lifeteam 10 in Hopkinsville in 2006. Worth eventually returned to the McLean County EMS in 2009.

Worth’s passion in the field has not gone unnoticed.

“She has such a love and drive for this job,” said Karen Payne, former paramedic and one of Worth’s mentors. “Anybody that works in this business will tell you that you don’t do it for the money and you obviously don’t do it for the glory. You have to do it for the love of it — and she absolutely embodies that and then she shares it with everybody else.”

The county has presented some challenges that other counties and cities may not have but Worth admits that she had a staff that was more than capable to carry out the ambulance runs and the day-to-day operations.

“McLean County not having a hospital makes it where we just have to be creative,” Worth said. “But, when you have a great staff … and they have good judgement calls ….”

Worth is pleased with the amount of achievements that EMS has been able to accomplish over the years and being a part of people’s start.

“We had a paramedic class here, then we’ve also had advanced classes here — participating in that and having new people starting their careers and getting a foothold right here in McLean County,” Worth said. “All of that is something to be really happy about but really proud of.”

Worth notes that being in the role as director kept her hands-on with her staff and the community as much as possible.

“This is a collaborative service,” Worth said. “If you don’t talk to the people that are out there and if you’re not out there doing (the job), you don’t have a clue of what works and what doesn’t. You need to have both. That’s why I worked the street as well as in the office. Our service is too small to have somebody that is dedicated in the office. It’d be nice and if we ever get to that run volume size …. If you are not out there, to me, you don’t really know what works for these people.”

Some folks note and admire that Worth has been both personable and professional throughout her time in the EMS field.

“She shares her knowledge,” Payne said. “That’s a wonderful thing because EMS is not just about going out and saving the day. Half the time, it’s holding grandma’s hand and telling her, ‘You’re going to be OK.’ She’s really good at those things and she’s really good at managing people. Not everybody has those gifts.”

“She’s such a lovable person to be around — all the way around ,” said Joe Hamilton, EMT. “She’s got a helping hand for everybody (and) a heart of gold. If you had any kind of question about anything, she had an ear to listen whether it was a question about the service or learning from an experience … she really had an open-door policy.”

“She’s a very dedicated person (with) a lot of years of experience,” said Nolan Clouse, assistant director. “It’s going to be very missed around McLean County because she has been dedicated her whole life. She’s taught a lot of us.”

Despite the high demand of the job, Worth noted that the people she worked with made it worthwhile.

“This place is more of a big family,” Worth said. “Always has been and that has always been my attraction to working here and being around these people because we always considered ourselves family here.”

The staff felt the same.

“It’s not a work environment when you come in here; it’s a family environment,” Hamilton said. “It’s a home away from home.”

Worth said that the interaction and relationships with the community and her staff is what she loved the most.

“(I’m going to miss) the people,” Worth said. “I think we do it for a lot of different reasons. But for me, (it was) the people. Not only the people I worked with but the people that I treated. That’s what I’ll miss more than anything.”

However, Hamilton knows that Worth will always be with them in spirit.

“No matter what, even if she’s retired and away from here — she’s always going to be a part of this family,” Hamilton said. “Once you’re part of the EMS, there’s no getting away from it.”