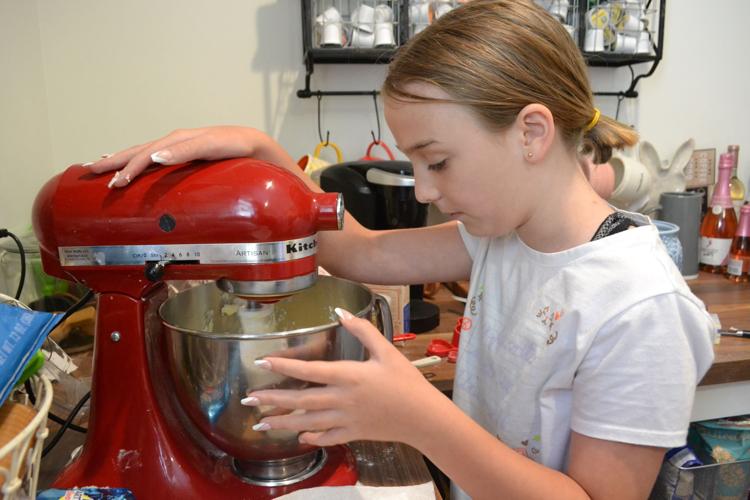 Annesleigh Melton, 10, of Calhoun prepares a banana cream cheese bread recipe in a mixer inside the pantry at her home on Monday. 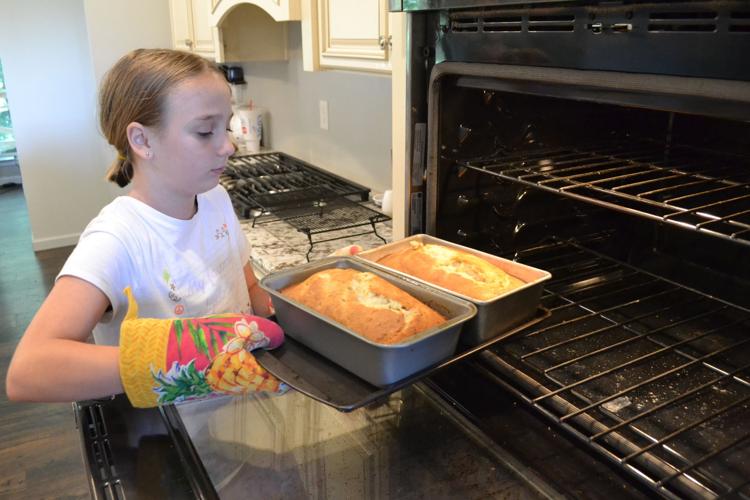 Annesleigh Melton prepares to take out her baked banana cream cheese bread from the oven inside her Calhoun home on Monday.

Annesleigh Melton, 10, of Calhoun prepares a banana cream cheese bread recipe in a mixer inside the pantry at her home on Monday.

Annesleigh Melton prepares to take out her baked banana cream cheese bread from the oven inside her Calhoun home on Monday.

With school out for the summer, kids are finding ways to beat the heat and have fun.

And while 10-year-old Calhoun Elementary School student Annesleigh Melton is doing just that — she’s also dedicating a lot of her down time baking sweets and treats in the kitchen of her Calhoun home.

But it’s all for a good cause.

Since the beginning of June, Annesleigh Melton has been participating in the month-long St. Jude Children’s Research Hospital Baking Challenge in honor of Cancer Survivor Month.

The challenge allows participants from across the country to support families with medical costs for treatment, travel, housing or food in order to focus on the child’s well-being and fighting back.

But her baking journey has come a long way up to this point that began when she was about 4.

“When I was little, I always did a lot of baking; I did cookies, brownies, all that stuff,” Annesleigh Melton said. “But when the pandemic started, we couldn’t go out or do anything so I just started to do a lot of bake sales.”

But before she began to sell her creations, Annesleigh Melton did it simply for enjoyment.

“That was always fun (to watch) and I always asked my mom, ‘When can I be on that?’ ” Annesleigh Melton said.

Eventually, she moved onto other food like cornbread which won over her parents and other family members that encouraged Annesleigh Melton to continue baking.

Her most-popular sellers have been chocolate chip and chocolate no-bake cookies.

At the time, it was about a two-week process from ordering, baking and pick-up.

The funds raised from the sales would go to different organizations that Annesleigh Melton felt were important to support, such as the non-profit Sus Hijos / His Children based in El Salvador after the suggestion from her grandmother Kathy Ellsworth who went to visit the country during a church mission trip.

She’s had experience of being part of other St. Jude initiatives before, including the WBKR St. Jude Radiothon.

For this challenge, participants receive a weekly theme or task of what to bake for each specific week with the option to give away their creations to friends, family or organizations in the community or holding a bake sale and putting the funds raised into their respective fundraiser account.

She puts up her item list on Wednesday and accepts orders until about Monday, with baking taking place the same day and pick-ups beginning on Tuesday.

Annesleigh Melton wanted to be able to help those who need it.

“...It’s not good if you know there’s a little kid there with cancer or an (illness) and they have to (live) off this (medical) equipment,” she said. “It’s just sad. Kids shouldn’t have to live like that.

Since the competition began, Annesleigh Melton has been challenged to bake cookies, pies and is currently working on bread.

“It’s fun and it helps a lot of people,” she said.

This also was the first time that Annesleigh Melton had first-hand experience with baking pies from scratch, which she said posed as a personal challenge at first.

“I never made a pie before,” Annesleigh Melton said. “...The crust was by far the hardest.”

Still, she made it through by making pies on a stick that were dipped into chocolate with white chocolate drizzle and lime zest and hand pies in the shape of empanadas.

And her attempts got her grandmother’s stamp of approval, which means a lot considering that she’s been known to make pie for some time.

“She actually tasted the graham cracker crust and she just took a spoon and ate it,” Annesleigh Melton said. “She took one bite and then just kept snacking on it. Once she ate it, she did a dance.”

The challenge has also expanded Annesleigh Melton’s knowledge and skill set such as learning how to use a zester.

She’s also been applying what she has learned in school to her first-hand experience when following measurements in the recipes she chooses from searches on Google and Pinterest.

“When I first started this baking challenge, I didn’t know that I was going to gain all this skill,” she said.

Her efforts have paid off and has met or surpassed her personal weekly goal of raising $150.

Annesleigh Melton has been able to see how her efforts in the kitchen have affected others when she received a letter after the radiothon from St. Jude.

“They sent a picture of a kid I helped (with) his whole family …,” she said. “He was getting sick … with a lot of colds and when they finally found out what was wrong with him; he found out he had leukemia.

“It makes me happy because stuff I like to do can help a lot of people.”

“As a 10-year-old, she could be doing a lot of things this summer that didn’t involve helping other people,” Andrea Melton said. “I’m just proud that she’s doing something that she loves, gaining new skills and getting to help others.”

For more information on the challenge and other St. Jude initiatives, visit stjude.org/get-involved/other-ways/facebook-challenges.html.

Cheryl Burke had an abortion at 18