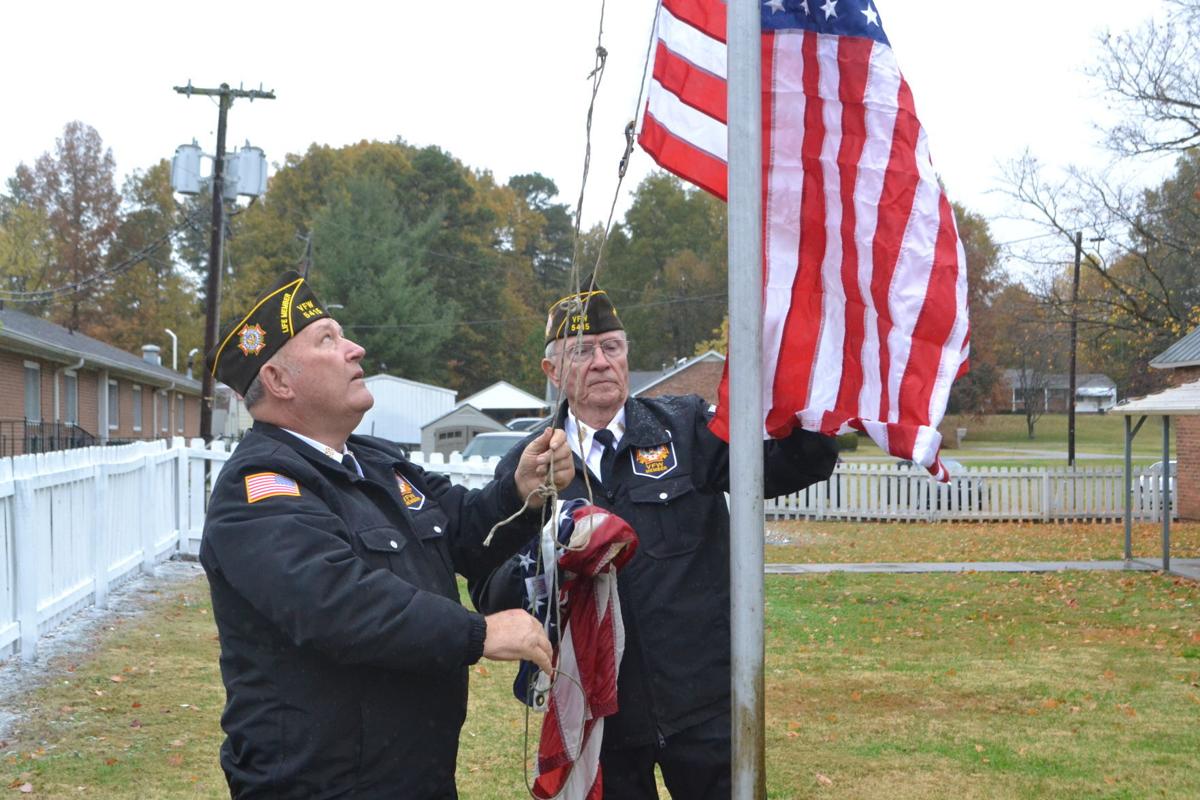 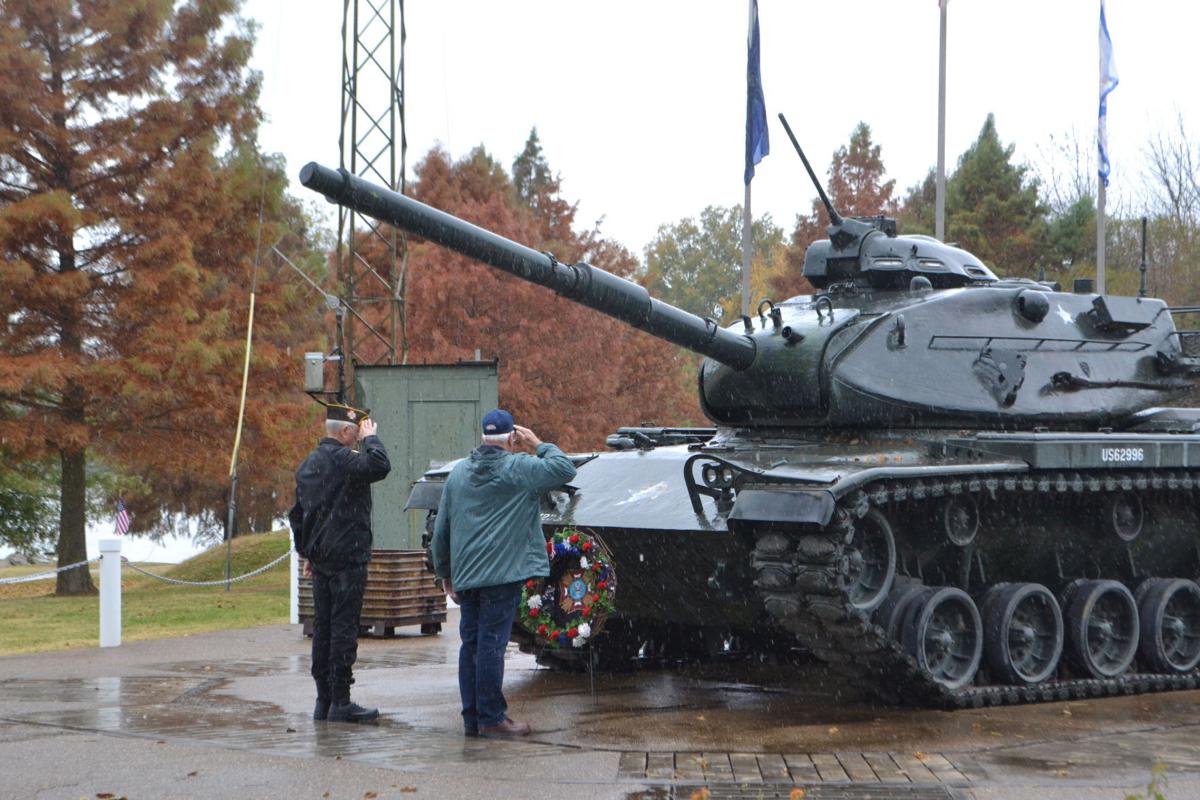 Despite the rain, many community members were in attendance to recognize those who have put their lives on the line.

“This is a big deal,” said John “Sonny” Renfrow, chairman of the committee who served six years in the U.S. Air Force. “The purpose is obviously to recognize the service of the veterans and those who serve the country. ...We’re delighted for the number of folks who came out on not a perfect day …, but it’s always a perfect day to say ‘thank you.’ ”

The event included emcee and speaker George Rhodes, who served for 26 years in the Kentucky Army National Guard, a Presentation of Colors by the McLean County High School JROTC, remarks from retired U.S. Army Col. Steve Myer, a wreath laying, honoring of deceased veterans, a Taps performance and a 21-gun salute by the VFW Post 5415 honor guard.

Commander David Scott, of VFW Post 5415 who served in the U.S. Marine Corps during the Vietnam War, said that the day is about something that many may not often appreciate.

“(Veterans Day) represents freedom,” Scott said. “(We) have taken that for granted. I think if people would stop and think, ‘What if your freedom was taken away? What would that mean?’ It means you couldn’t live where you want to live …. There’s so many things that freedom (does). ...We have to keep fighting for it — it’s not just given ….”

Livermore mayor Jesse Johnson, who served in the U.S. Navy, notes that this time of the year has him reflecting on his experience and the reality of what he could have endured.

“It brings back memories of patriotism that I felt in the ‘60s,” Johnson said. “It’s a time for me to remember and appreciate the freedoms that we have and the camaraderie with the people that I encounter throughout life. It’s just one of those feelings of being a part of those who actually stepped up and signed their name and said ‘yes.’ And when we did that, I don’t think very many of us really had a conscious thought of, ‘Hey, I could lose my life.’ But we knew it was always a possibility — but we never really knew that there were so many that happened to.

“I just feel proud to have been able to serve and to help preserve the freedoms that we have here in the country.”

The event has typically been held at Livermore City Hall, traditionally including a meal and a longer ceremony, but was moved last year to the riverfront due to concerns surrounding COVID-19.

“The key is that we have been classically doing this (event) inside,” Renfrow said. “But with our current health situations, (having it) outdoors made a lot more sense. ...In our current times, things have changed a little bit, but it’s one of the things that the military does — they’re adaptive. We try to honor those military veterans, but we also want to adapt to do the things that are necessary to continue the process of saying ‘thank you.’ ”

VFW Post 5415 members also attended an event Thursday at Riverside Care & Rehabilitation in Calhoun, which included a new flag raising and another 21-gun salute for the veterans that live and work at the facility — including veterans that served in the Korean War, Vietnam War, World War II, and received the Purple Heart.

“We have seven residents and one employee,” said Darlene Johnson, director of activities, of the facility’s link to the military. “(We want) to recognize our vets for the service that they’ve done and their dedication and what they’ve given for us to have the freedom that we have.”

“I think (Veterans Day) means a little something different to everybody,” said Matt Clark, Riverside Care & Rehabilitation administrator and CEO. “I’ve got active members in my family in the military and I’ve got a grandfather that’s a veteran. It means a lot to me too. ...This day, especially, means a lot to many of our staff and our residents because they all have someone they know that’s a veteran. ...It’s an honor to serve our elderly population but it’s definitely an honor to give back to our veterans.”

“We don’t want them to be forgotten,” said Jennifer Adelman, Riverside Care & Rehabilitation admissions and marketing director. “Especially (with) everyone being locked down, and it’s been a rough couple of years …. We just want them to know that we appreciate them and all that they’ve done.”

On Friday, the high school’s JROTC hosted its own program that included performances by the drill team, the high school band, a POW/MIA Table ceremony, and a video presentation in honor of veterans in attendance. The event was livestreamed at every school in the county in order for every student to show their support.

David James, JROTC’s senior army instructor, was happy that the event was able to occur this year after having to postpone it due to the pandemic.

“It’s been a rough couple of years, but we weather the storm, and it’s been getting better,” James said. “It just has to take time.”

James stated that people who served “without question, knew what we were fighting for” and echoed Scott’s thoughts.

“It was for their home, their business, their farm, their village, their town, their city — it was for freedom,” James said. “That freedom has transcended generations not because it has been guaranteed or has come easy, but because over the years, selfless Americans have continued to stand up, raise their right hand and commit to ensuring liberty for all of us.”

James shared with the crowd that he was surprised that some students he recently interacted with were not aware of the importance or purpose of Veterans Day.

“The first question I asked was, ‘What is Veterans Day?’ Of course, everyone said it’s to honor veterans and all that stuff. But, where did Veterans Day come from?” James said. “Not one student could tell me what Veterans Day was or when it started. ...I want to put that out there, especially to the young folks in the crowd, to know our history. We have to teach our young folks the past so they know the future ….”

Many folks see that many service people have been inclined to settle in the county due to its familiarity, genuine environment and support for people who have served and are on active duty.

“(There are) a tremendous amount of service people who reside here in Livermore, and those who were born and raised here and ended up frequently serving, if not in the National Guard, through the other branches of service,” Renfrow said. “It’s welcoming. ...I think it’s hometown, and when home is the spot where the heart is, it’s pretty hard not to come back. And I think one of the keys is that we do attempt to continue to recognize the value of service — I think that’s a big attraction for a lot of folks to stay ….”

“It’s down to earth, it’s rural,” Scott said. “I think … people want to come back to where their roots are.”

“(I think) it’s the small town — everybody knows everybody and everybody feels like family,” Adelman said.

Though it may prove difficult to show, the community is keen on respecting and recognizing those who put their lives at stake.

“While we cannot ever fully repay the debt of gratitude we owe to (our veterans), we can start by celebrating (them) today,” James said. “We teach our children of (their) sacrifice, we encourage others to show their support and appreciation at every turn. We work to honor our veterans. Not just not Veterans Day, but every single day.

“We can never repay the debt to our nation’s heroes, but it remains our duty to try.”