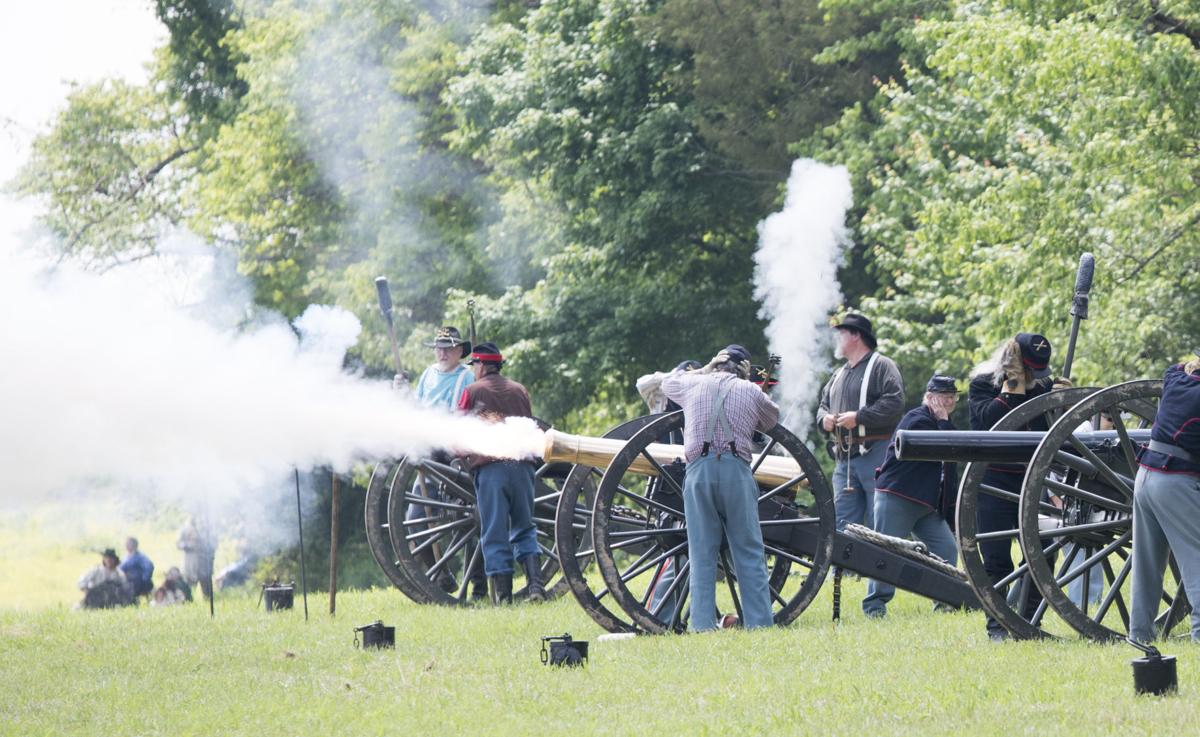 Battle of Sacramento reenactors shoots a canon during the annual event. 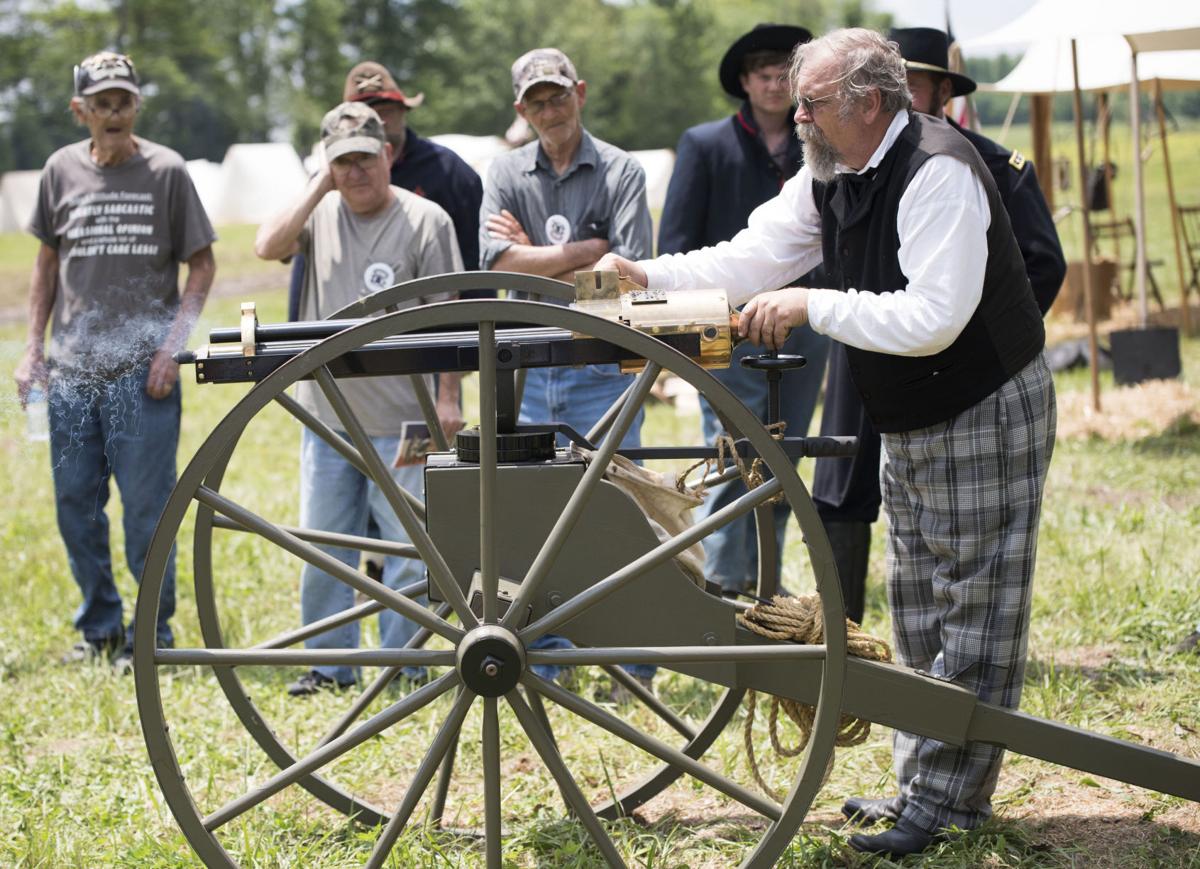 Battle of Sacramento reenactors demonstrate how a Gatling gun is used.

Battle of Sacramento reenactors shoots a canon during the annual event.

Battle of Sacramento reenactors demonstrate how a Gatling gun is used.

The Battle of Sacramento Reenactment committee met April 13 to discuss the future of the battle after taking an off year in 2020 due to the COVID-19 pandemic. The committee has made the decision to end the battle reenactments after 25 years.

The committee reviewed several options for the future and it was decided that the location of the reenactment could be of benefit to more individuals if the vision of the grounds was broadened to host a variety of community events, including historical and civic activities.

“Therefore, we would like to say to the Battle of Sacramento Civil War reenactment, thanks for the memories,” the committee said in a statement issued Tuesday. “There have been 25 years of memories. It has been a time when McLean County rolled out the red carpet to individuals from all over the United States and several foreign countries. Lasting friendships were made and the committee hopes the reenactment weekend will be remembered as some of the best times in your memory. So at this time, we would like for you to take a walk down memory lane and relive a few highlights of 25 wonderful years.”

According to the statement, the reenactment began in 1995 when McLean County Judge-Executive Larry Whitaker met with a small group of individuals. Residents in the county and surrounding areas were not aware of the local history of the Union and Confederate encounter, which occurred early on in the Civil War on Dec. 28, 1861.

After preparation, a two-day reenactment was scheduled and 35 reenactors and two horses attended. Following the 1995 event, with the assistance of the Kentucky Heritage Council, McLean County Fiscal Court and the City of Sacramento, the decision was made for the reenactment to be held annually during the third weekend of May.

The following year in 1996, 350 reenactors participated in the Battle of Sacramento, according to the committee.

“The Battle of Sacramento Reenactment was building a reputation where southern hospitality was displayed at its finest,” the statement reads. “In 1997, the word was out that Sacramento was the place to be. The reenactor numbers reached 714 with 20,000 in attendance to watch history come alive.”

A new event was eventually added for women attending the reenactment. The first Battle of Sacramento “Ladies Tea” was held on the lawn of Sacramento Elementary School. Attendees were served on china with fine linens and would dress up, arriving in limousines to the point of destination.

According to the committee, Russell Nall and Wendell Miller, two local landowners, were honored by the Kentucky Heritage Council and the Kentucky Civil War Sites Association when the battle site was placed on the National Register of Historic Places in 1998.

“School Days” was also added to the battle in 1998. Over 1,000 students from seven counties toured the living history demonstrations and exhibits.

Jim Sayre, an Abraham Lincoln reenactor, made his first presentation in 1998. Later that year, an 1838 two-story log home was donated by the Nall family and was relocated to the battlefield for restoration. The home eventually became a museum with items donated from various sources.

“In 1999, the event grew to over 1,200 reenactors, including 150 cavalry and 25 canons,” the committee said. “The firing of the large number of canons shook the Earth and brought 19th century history to life.”

In 2000, over 1,300 soldiers participated in the reenactment, which included 200 cavalry and 21 canons, according to the committee.

“During the annual Community Appreciation Dinner on Saturday evening, the community of Sacramento prepared and served over 2,000 home-cooked meals to the reenactors and their family members,” the committee said. “That year, two new events were added, which included a business decorating contest and Civil War pageant. The ‘Ladies Tea’ also made headlines when men began serving the ladies. What an impressive sight.”

According to the committee, 2001 was “a year to remember” for the battle. Reenactors numbered 1,600 and over 30,000 visitors came to Sacramento. Lincoln and Jefferson Davis reenactors attended, along with General Grant Lee and Lt. Colonel Nathan Bedford Forrest reenactors. A Friday night canon firing was added, along with the “Recount of Mollie’s Ride.” Over 1,000 people attended the Military Ball on Saturday evening.

“Each year a milestone was reached,” the committee said. “On April 15, 2002, the site of the Battle of Sacramento reenactment was officially purchased by the City of Sacramento and McLean County Fiscal Court. That year, despite the mud, over 1,200 reenactors, including 10 new units from 16 states, and over 20,000 spectators attended the annual event.”

In 2003, the “Ladies Tea” hosted Mean Mary and Frank, as well as a musical presentation by Rick Revel. Both musical acts attended the battle for years after.

According to the committee, visitors from France filmed a Civil War TV documentary and a military wedding was held on the battlefield for Brian Newton and Gina Demont of the 14th Kentucky Light Artillery. Both events were held in 2003.

In 2004, the Sacramento battlefield was added to the National Park Service Map of Civil War sites and in 2005, approximately 1,000 reenactors participated in the event, representing 15 states.

“The reenactments continued and each year, special memories were made,” the committee said. “In 2011, we gathered to commemorate the 150th anniversary of the Battle of Sacramento. Each year, we looked forward to seeing our reenactment friends who came year after year. As in life, there would come a time when there would be a vacant chair because our friend had passed. One one of our special friends, Cliff Howard, who portrayed Davis was one of many friends who did not return to the battlefield. Howard and his time, Joan, became very special friends to the Battle of Sacramento. Possibly one of the most vivid memories of the reenactment years is the portrayal of his Civil War period funeral, complete with riderless horses followed by troops of both sides trailing the hearse draped in black mourning down Highway 56 to the Nall house, where his memorial service was held.”

The committee said these memories, and so many others, will always be with them.

“As mentioned, the camaraderie among the workers, the reenactors and those attending were outstanding,” they said. “Some will remember the young reenactor who purchased an older horse before he came to the Battle of Sacramento. However, possibly due to all of the excitement on the battlefield, the horse died suddenly in the midst of battle. At a lot of events that would have been the end, everyone would have walked away, but not at the Battle of Sacramento. A hat was passed and enough money was raised for the young man to purchase another horse. It is that type of caring that was woven through the Battle of Sacramento. It was a feeling that you cannot explain unless you were a part of it.”

The committee said it would like to extend a “thank you” to the individuals who planned, raised money, cooked, served, entertained, built props, sewed, cleaned, mowed, secured needed supplies and did “whatever was needed to be done to make sure everything was just right for the special guests who visited the Battle of Sacramento reenactment.

The committee said they want to remind the community that they will not forget the friendships made, the laughter shared or the tears shed “for those who have gone before us.”

“The Battle of Sacramento reenactment brought a rural community together and showed everyone what the meaning of ‘Come on in and make yourself at home’ means,” the committee said. “McLean County opened their door to complete strangers who became lifelong friends.”