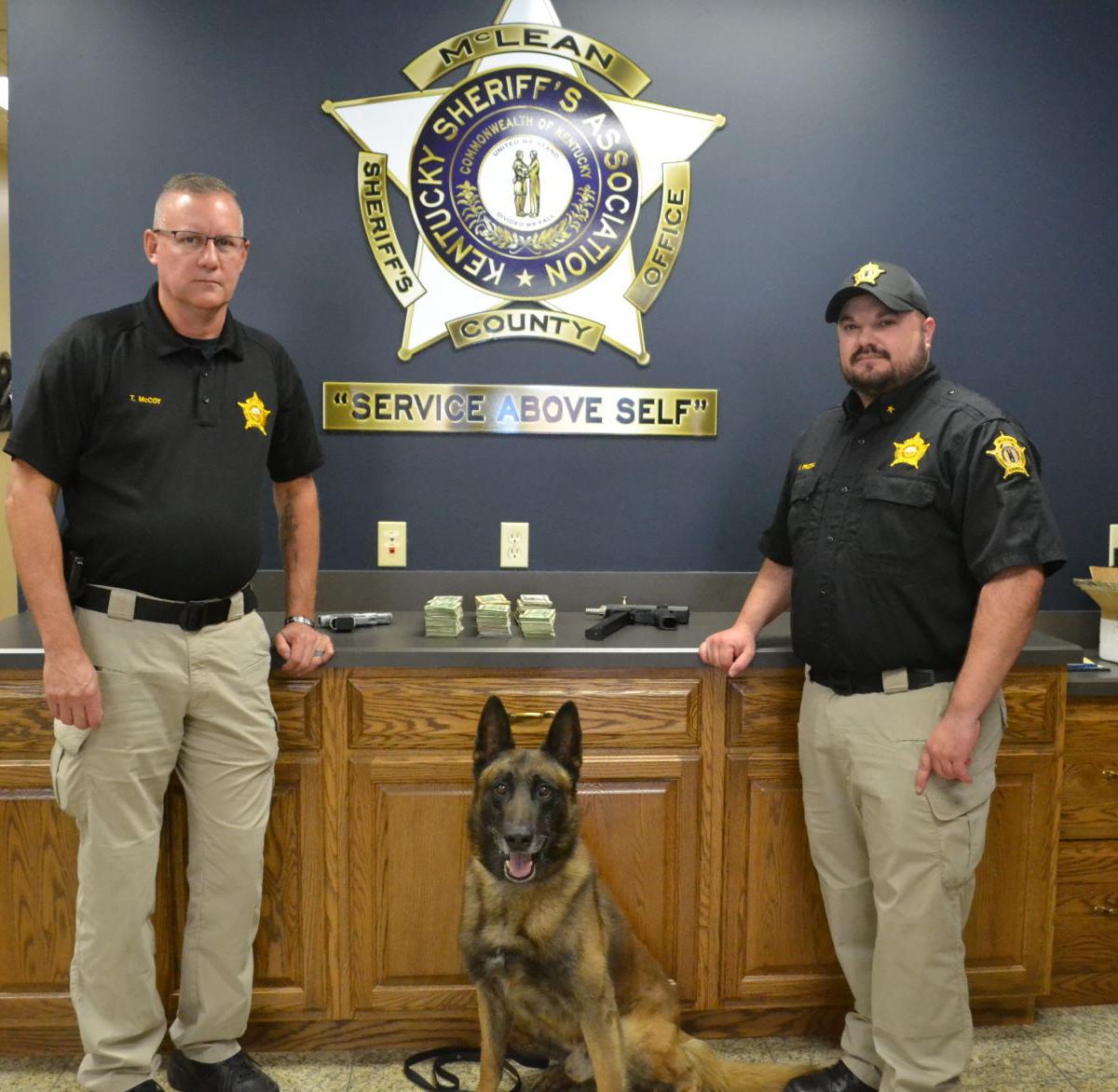 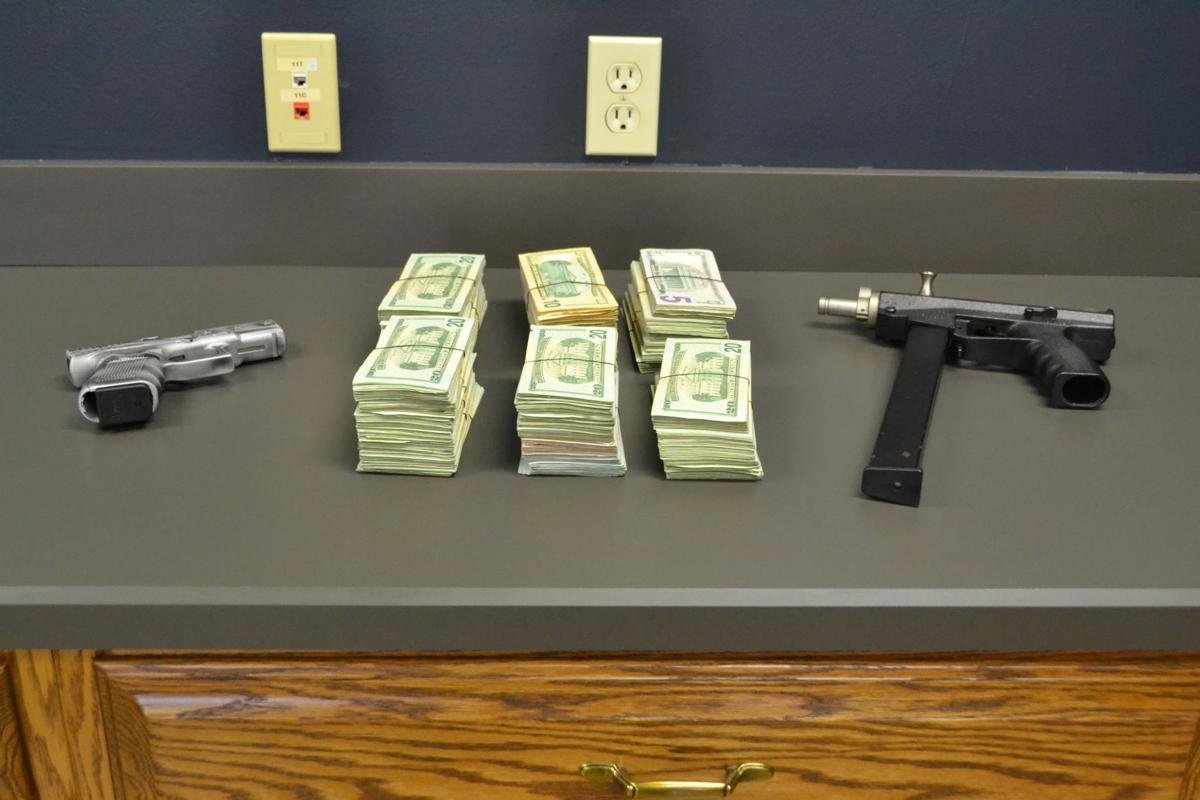 The McLean County Sheriff’s Office received a large amount of cash and firearms from a 2020 drug case.

According to Sheriff Ken Frizzell, the office was ordered to receive approximately $41,000 in cash and two firearms, a Glock 23, 40 caliber and a 9 mm, stemming from a drug case that occurred last October.

Frizzell said that it typically takes about five to six months to get through cases, but timing wasn’t on their side.

“A lot of times our courts run a little bit faster, but we had some delays due to COVID ... and courts shut down for a little bit — it took a little while for them to open back up and have grand juries to do indictments,” Frizzell said. “That’s why it took about a year for this case to get done.”

According to reports, it was Oct. 31, 2020 at 11:08 p.m. when deputy Tim McCoy, special deputy David Rickard and deputy Anthony Howard were running radar on KY-138 West between Rumsey and Hopkins County. McCoy caught a 2007 Maserati Quattroporte, driven by Javea Richardson of Nicholasville, speeding, going 68 mph in a 55 zone.

While officers attempted to stop the car, the passenger, Adrionna Williams of Lexington, threw two bags, one filled with several small bags, out the window. It was later confirmed that the bags contained marijuana and marijuana-infused cookies, out the window.

Upon pulling the vehicle over, McCoy smelled a suspected odor of marijuana. Howard deployed Kilo, their K9 dog, to search the vehicle and was able to locate more bags of marijuana on both Richardson’s and Williams’ seats.

Frizzell said that during the vehicle search, other vehicles stopped and attempted to intervene during the investigation.

“There were two other SUVs that pulled up to the scene,” Frizzell said. “They were yelling obscenities and racial overtone type statements towards the officers. Apparently they knew Mr. Richardson and trying to cause a distraction.”

Frizzell, along with Major Fred Coomes, and Jailer Chris Ellis, were called to the scene.

“We had the jailer come with the van in case we had to arrest several subjects,” Frizzell said. “Depending on their level of interference, they could possibly commit a crime in interfering with the investigation.”

However, upon arriving on scene, Frizzell said the two SUVs left and were able to continue the investigation without issue.

Further investigation of the vehicle found a large sum of cash and two handguns. Frizzell and Coomes interviewed Richardson and Williams; Williams admitted to throwing the bags containing marijuana and cookies out the window, while Richardson told officers that the $41,000 was “flex money” from a rap concert he was to perform at before stating that the money was from selling two semi trucks.

“In a situation like that, where we have large amounts of cash — they give you a statement as to where they got it. Especially when there’s drugs involved” Frizzell said. “We (saw) that under the suspicion that it was drug money; Mr. Richardson was advised that if he could show proof of the sale of the semis, that the money would be returned.”

However, Richardson was not able to provide a bill of sale for the trucks nor could say whom he sold the trucks to. Richardson and Williams were arrested, with all items seized because “of the belief they were ill gotten gains from drug trafficking.”

Frizzell said that Richardson was later indicted on trafficking in marijuana less than eight ounces while armed. Through a plea agreement by Clayton Adams, attorney for Kentucky Commonwealth’s Attorneys’ Association, Richardson stipulated that the cash was from drug trafficking as the sheriff’s office suspected.

The cash and guns were forfeited to the Sheriff’s office this past week and Frizzell has plans on how to use the money.

“We’re going to use it for equipment to combat drug issues in the county,” Frizzell said. “We also use it for education. We can use it for sending our deputies to specialized training (and for) forms of public education — anything to promote drug-free atmosphere … and educate the public about narcotics. We’ve bought several pamphlets and stuff in the past (where) we’ve distributed them out, especially amongst the schools. ...If we can keep those kids off of it, we (have) a whole lot better plan and hopefully a whole lot less drug work in the future.”

Frizzell said that despite this occurrence, the county has been tame in terms of drug cases, with the exception of actively working on one dubbed “Operation: Tool Time.”

“This past year has been a really good year for us,” Frizzell said. “We got a case that we worked on for several … months this year. I can’t go into a lot of details about it because there are still some people finalizing their pleas and waiting to see if they’re going to plead out or go to trial.”

Frizzell is proud of his office and notes that teamwork and collaboration has been a vital part in their successes of keeping crime out of the county.

“This just right here shows, proof-positive, that we got a great team,” Frizzell said. “We work well together (and) we work well with other agencies. We use one another’s strengths in order to make cases like this stronger. And I have to commend … Clayton Adams as well in this case. He told me this, ‘You guys are running into the one yard line and my job is to punch it into the end zone.’ He’s worked extremely well with us on these cases and consulted with us on these cases.”