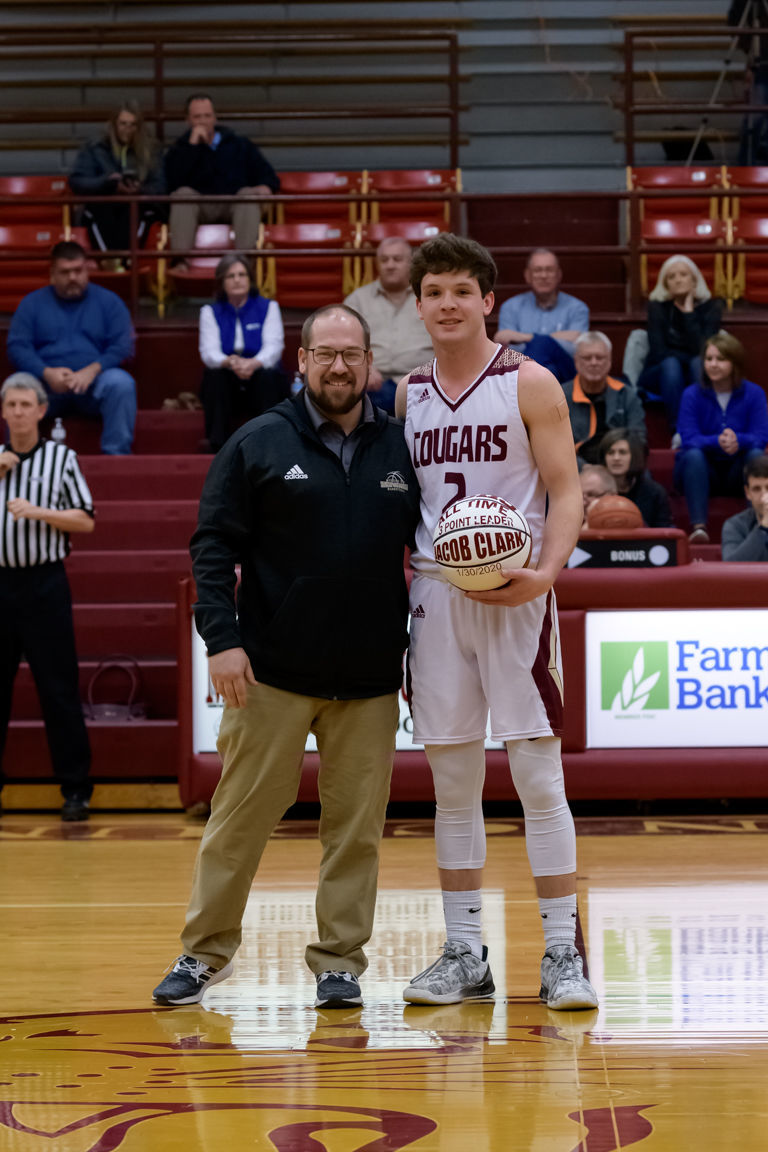 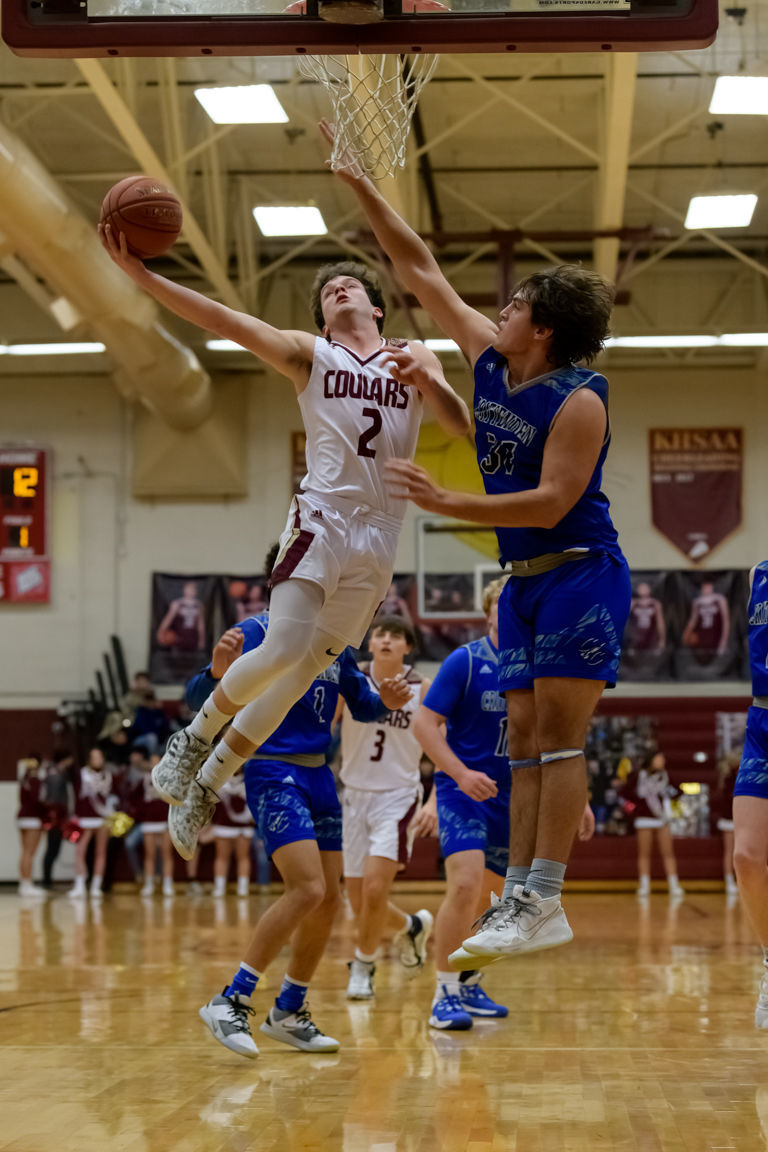 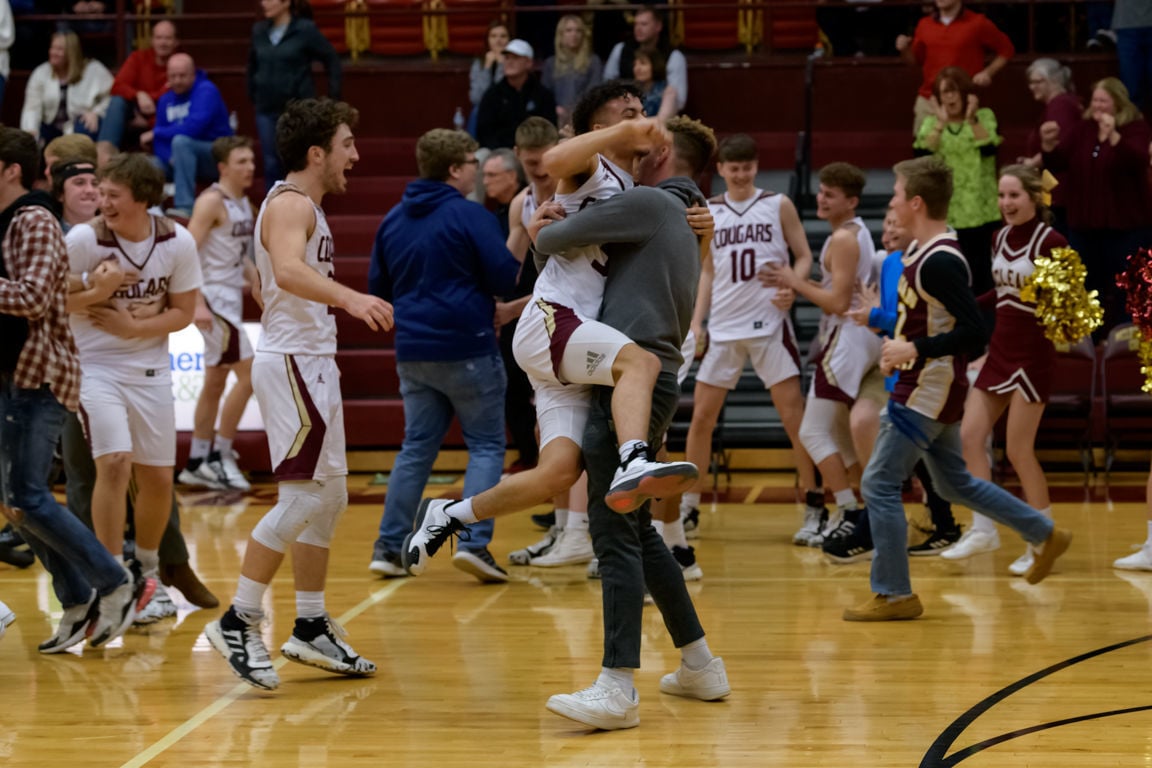 Senior Zach Mimms leaps into the arms of Christian Butterworth as the Cougars celebrate a 55-54 win over Apollo on Feb. 21. The game marked the first win over Apollo in 20 years. 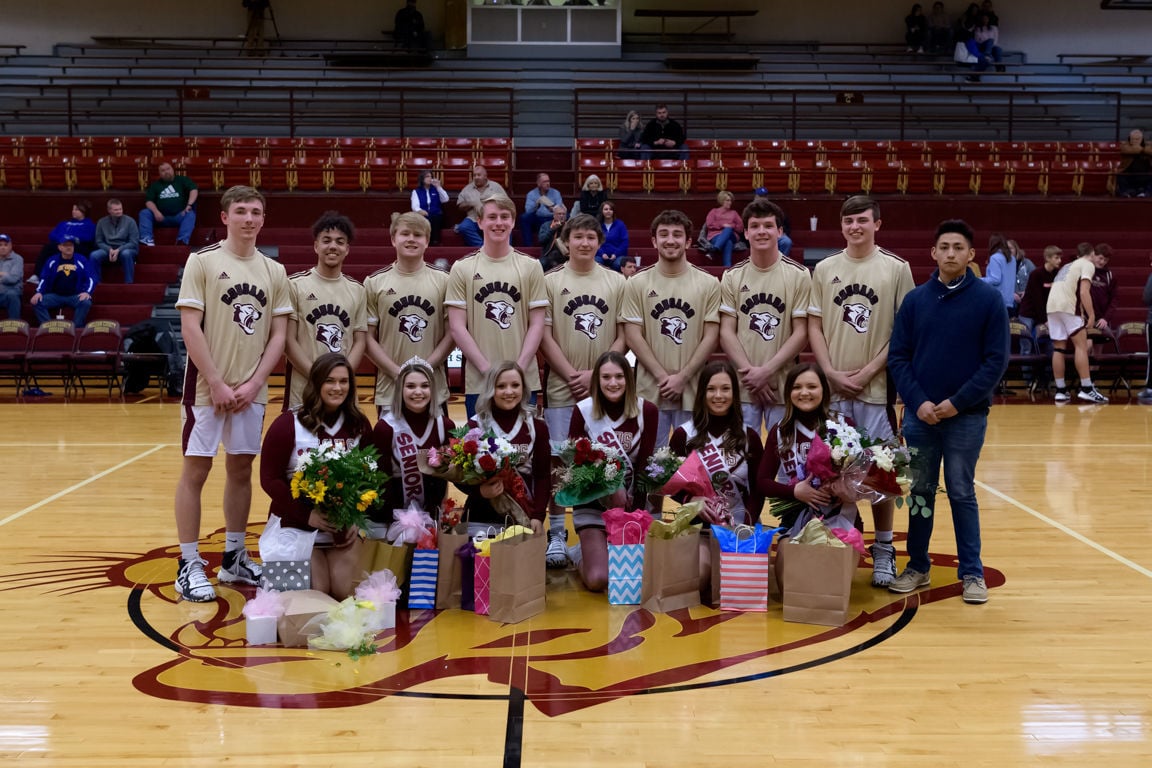 Senior basketball players and cheerleaders were recognized at the game on Feb. 20.

Senior Zach Mimms leaps into the arms of Christian Butterworth as the Cougars celebrate a 55-54 win over Apollo on Feb. 21. The game marked the first win over Apollo in 20 years.

Senior basketball players and cheerleaders were recognized at the game on Feb. 20.

McLean County hosted three games at home last week and came out on top each night. The Cougars won 78-45 over the Faith Defenders out of Elizabethtown on Feb. 17. They ended the week with a 63-49 victory over Crittenden County followed by a nail-biting 55-54 triumph over Apollo last Friday.

The Cougars jumped out to an early lead against the Faith Defenders and were up 23-8 by the end of the first quarter. McLean County continued to pound the boards and cruised to a 78-45 victory.

The game against Crittenden County was Senior Night and opened with a tipoff to the Cougars and an immediate basket by Clark with an assist from Trey Englehardt. Brayden Bishop assisted Brady Dame with a three-pointer that gave the Cougars a 29-26 lead at the half.

Clark sank a three before Patterson made an immediate steal and drove downtown for a dunk. Clark then netted another three-pointer that gave the Cougars a 10-point lead with 5:40 to go. McLean County kept up the momentum and ended the game with a 63-49 win over the Rockets.

Patterson led with a double-double from 19 points, 10 rebounds, eight assists and four steals. Clark was perfect from the line and had 17 points, two each in rebounds and assists along with a steal. Isaac Springer had 10 points, two rebounds, two assists and a steal.

The Cougars beat Apollo on February 21 for the first time since 1999. The Eagles jumped out to a 7-0 lead and stayed out ahead of McLean by as much as 11 points until the final quarter. The Cougars began to chip away at the deficit in the final three minutes of the game and a three-pointer by Springer gave them their very first lead by a single point with only 18 seconds to go. The McLean County defense buckled down and held off the Eagles who made a desperate shot at the buzzer that bounced off the rim as players and fans erupted, storming the floor to celebrate the 55-54 win.

Springer led with 12 points, five rebounds, five assists and a block. Patterson had 11 points, four rebounds, three blocks, two steals and an assist. Dame and Clark also had 11 points each in the game.

“We are playing as well as we have all year which is what you want to be doing at tournament time,” shared head coach Darren Lynam. “It was a very exciting win over Apollo.”

The Cougars faced Ohio County earlier this week in the first round of the 10th District tournament held here at home. The championship game is tonight, Feb. 27 at 7 p.m.