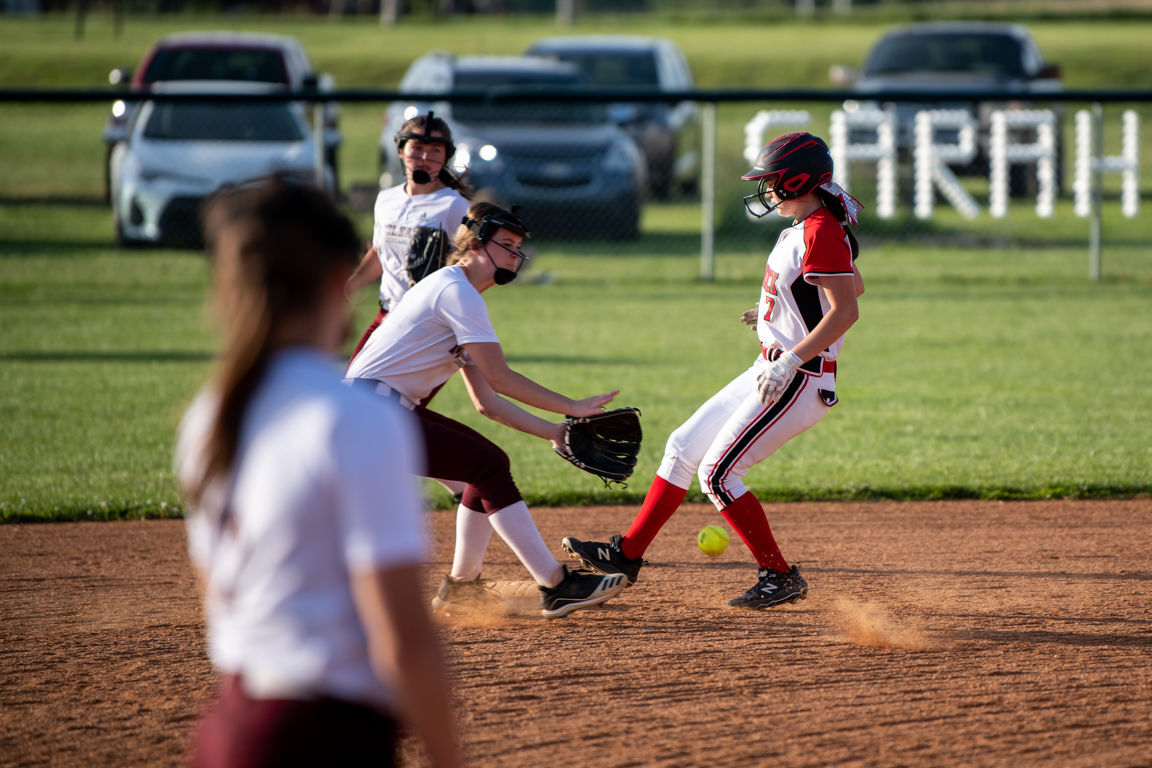 Lady Cougar Amber Willis goes for an out at second base. 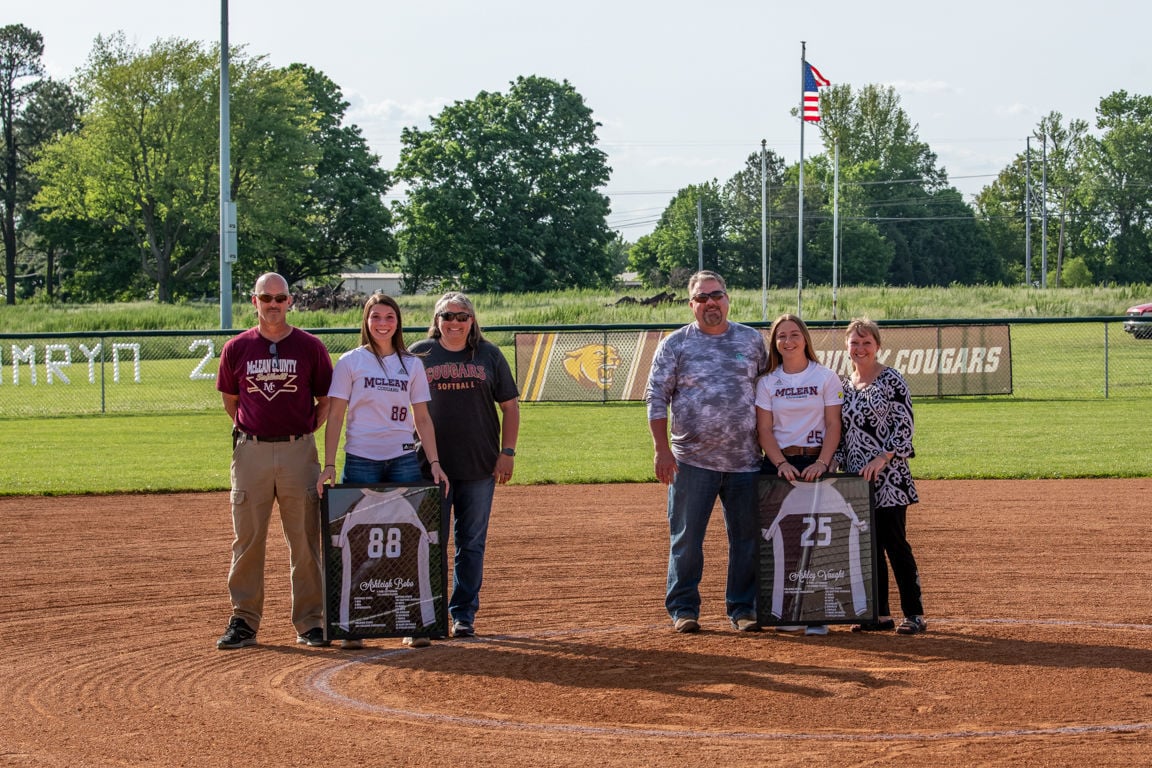 The 2020 seniors were recognized at the home game on May 20 since they missed the season in full due to the COVID-19 pandemic. Pictured on the left is Ashleigh Bobo with her parents, Ronnie and Karri Bobo. Ashley Vaught is pictured with her parents, Kevin and Lisa Vaught. 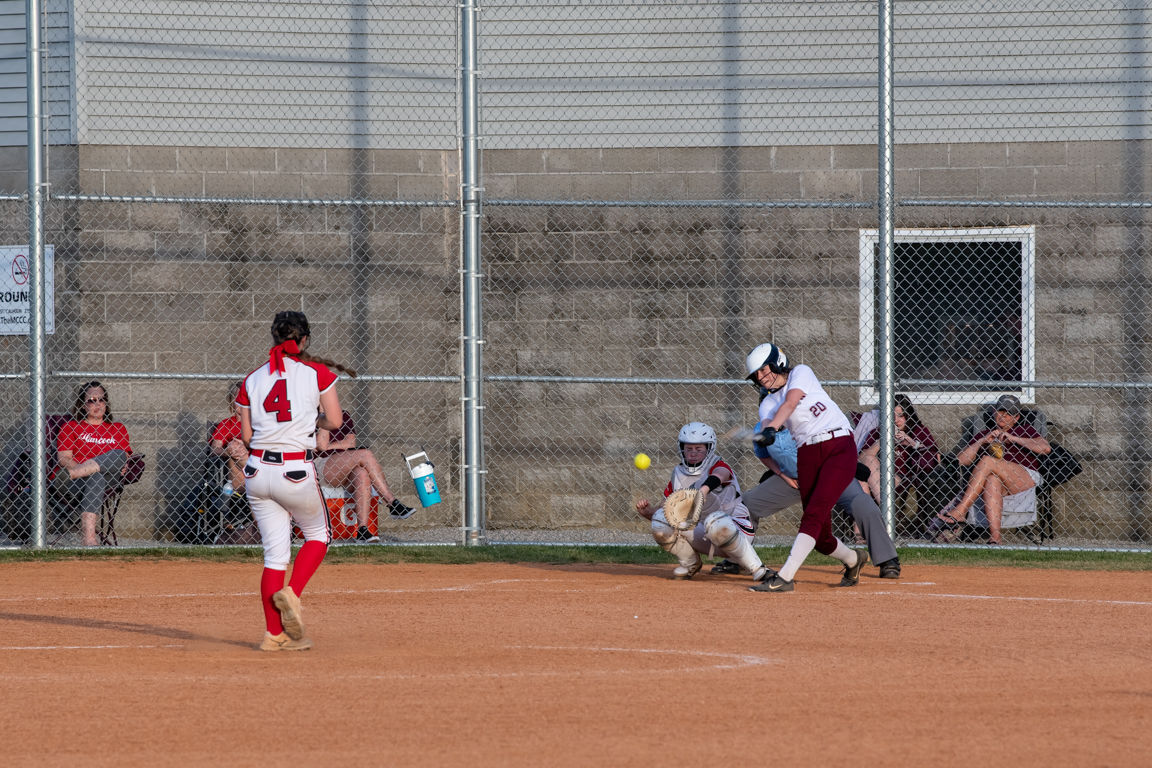 Lady Cougar Claire Hudson is up to bat against Hancock County on May 20.

Lady Cougar Amber Willis goes for an out at second base.

The 2020 seniors were recognized at the home game on May 20 since they missed the season in full due to the COVID-19 pandemic. Pictured on the left is Ashleigh Bobo with her parents, Ronnie and Karri Bobo. Ashley Vaught is pictured with her parents, Kevin and Lisa Vaught.

Lady Cougar Claire Hudson is up to bat against Hancock County on May 20.

The McLean County High School softball team spent last week at home with several games on the home dirt. The Lady Cougars won big over Owensboro High School on May 17 for Senior Night with a score of 11-3. McLean County ended the week with a couple losses against Hancock County 15-5 on Thursday and 13-0 against Apollo last Saturday.

McLean County cruised to an easy victory over Owensboro, winning 11-3 on the night they honored their seniors. They made quick work of the Lady Red Devils with three up and three down to start the first inning. The Lady Cougars then got their offense started big with the first of two over-the-fence homeruns by Claire Hudson. Hudson put the long ball over at centerfield before rounding the bases. The home team plated four runs in the inning.

The McLean County defense was strong again with a repeat of three up and three down in both the second and third innings before the offense went to work again at the plate in the fourth. Keeley Cox executed a bunt and beat the throw to first. A single by Taylor Galloway scored Cox and Olivia Baird before Sarah Linville pushed another run across with a single.

Amanda Ecton got on with a single before Claire Hudson sent another dinger over the left field fence in the fifth. Linville caught a pop fly in foul territory right at the fence by third base for an out in the sixth before starting the Lady Cougars off again with a knock that hit the bottom of the left field fence for a double. Ecton and Cox both executed successful bunts that scored the final runs in addition to them making it safely to first base. The McLean County defense then held the Lady Red Devils off the plate again in the top of the seventh to end the game with an 11-3 win.

Taylor Galloway led the Lady Cougars Varsity to victory in the pitcher’s circle. She lasted seven innings, allowing six hits and three runs while striking out five and walking one.

Catcher Kaleigh Miller served behind the plate for all seven innings. Miller allowed no passed balls and zero stolen bases.

The Lady Cougars scored five runs in the third inning against the Lady Hornets on May 20, but it would be the only time they crossed the plate in the 15-5 loss. Amanda Ecton, Claire Hudson and Shelby Atherton powered the big inning with those RBIs.

McLean County tallied seven hits on the day. Amanda Ecton and Sarah Linville both went 2-for-3 at the plate to lead the Lady Cougars. Ecton had a double, an RBI and scored a run. Linville also crossed the plate once.

Taylor Galloway took the loss for McLean County. The righty lasted three and two-thirds innings, allowing 13 hits and 11 runs while striking out two and walking zero.

The Lady Cougars struggled to put runs on the board and had a tough time defensively containing Apollo last Saturday. The Lady Eagles started strong with eight runs in the first inning, ending with a 13-0 win over McLean.

Claire Hudson, Amanda Ecton and Galloway all had one hit to lead the Lady Cougars. Catcher Kaleigh Miller served all five innings behind the plate and had the most chances in the field with four. All four were putouts, with zero errors and no passed balls allowed.

McLean County will be on the road to Grayson County tonight, May 27. The Lady Cougars will travel to Russellville for their final game of the regular season on Friday. Both games will begin at 5:30 p.m.

Henry Golding: I want my daughter to travel the world

Selena Gomez: 'My experiences in relationships have been cursed'