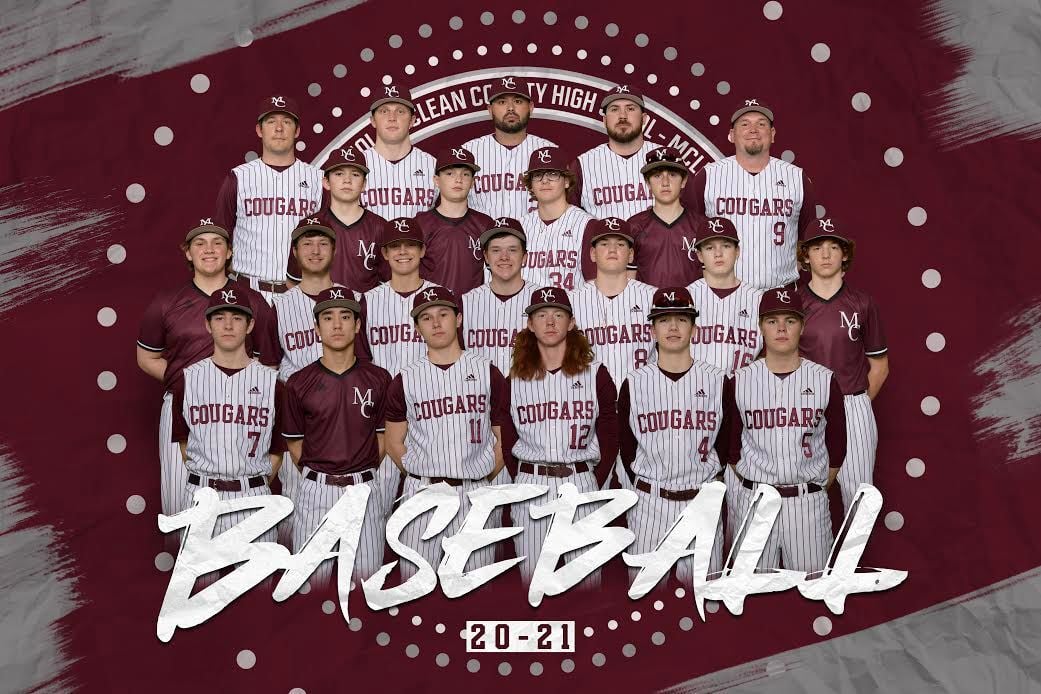 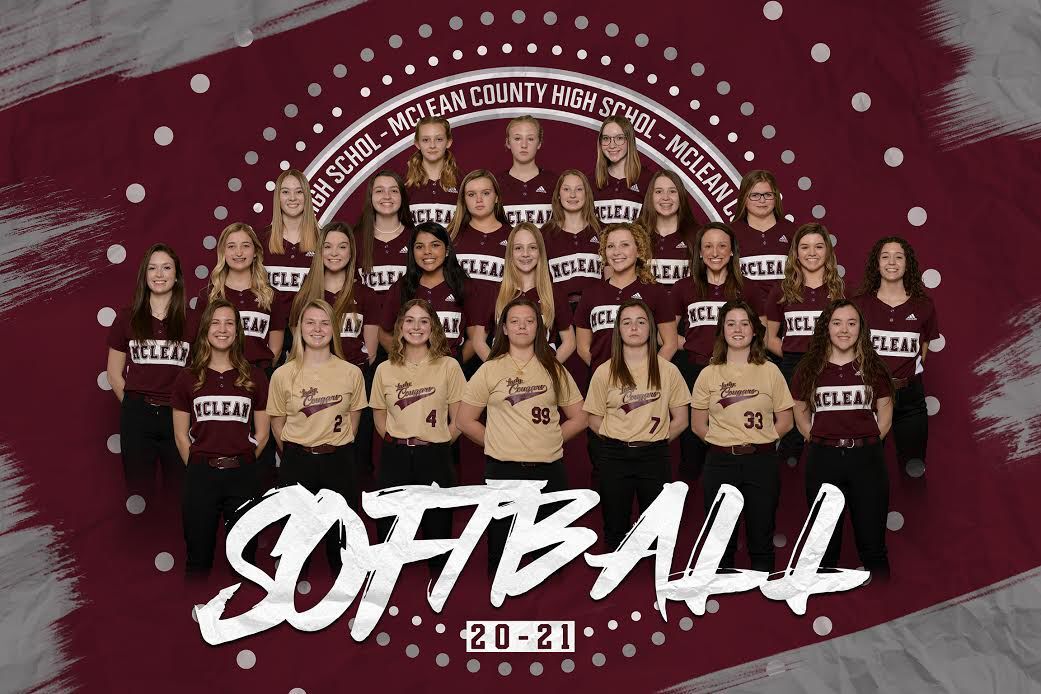 After all of last year’s spring sports at McLean County High School were either cut short after barely beginning or cancelled completely due to COVID-19, current athletes, coaches and fans alike are excited to see track, softball and baseball seasons beginning for 2021. While things are still quite different due to current protocols, the common theme among all parties involved is a sense of gratitude that they are back on the track and the field.

The Cougars have quite a bit of experience returning to the track team from several seniors on the men’s side with Braeden Peercy (high jump, sprints), Elliot Evans (triple jump, long jump, and sprints), Andrew Munster (throws, sprints), Aaron Ring (middle distance, distance) and Jessee Wood (throws). They have also picked up a new senior thrower in Chandler Moore. Caleb Stein was on the team as a freshman and is returning this year, working in the middle distances. Senior Emily Baggett is also new to the team this season. She is working on long jump and shorter running events.

For the women, the team is very young. They are led by Bree Frailley (hurdles, sprints), Rose Jones (distance) and a host of underclassmen and middle school athletes who are all working hard and will help fill out the team. It is early, but they are showing promise for the upcoming season.

The numbers overall are down due to all the issues with the Coronavirus and the team currently has just under 30 athletes. Head Coach Gary Morris’ biggest hope is that they can complete the season. “We will take this one practice at a time and one week at a time and if all goes well, we improve every week and reach Regionals with everyone healthy, having completed the track regular season without missing meets.”

Due to current Covid-19 protocols, there will be some meets where parents will not be allowed to watch from the stands. Meets will also take longer than usual due to precautions required by the KHSAA in order for the meets to run safely. Coach Morris expressed his appreciation for the support from the administration, teachers and staff of the high school. “I also want to thank our parents who spend a lot of time doing laundry, hauling athletes and staying on top of students to get their school work done. I know this has been a very stressful time.”

The senior athletes in all sports were disappointed when seasons were cancelled last year and are all very excited to be competing again. Aaron Ring is focused on getting back to the point he was physically before the season was cancelled last year. “I’ve definitely got out of shape during quarantine and I’d like to get back to the point where I was before I left off,” stated Ring. “My biggest challenge will be keeping up with some of the newer people, specifically my brother.”

Jessee Wood is excited for Senior Night and the throwers relay. “My main goal for this season is to compete at the state level and to break the school discus record.”

Braeden Peercy has set personal goals to qualify for state and break some records along the way. He is looking forward to seeing how much the team as a whole will improve as the season progresses. “I think the biggest challenge by far will be the new rules and regulations that are being implemented this season, but I think the team is doing a good job working through these challenges and these bumps in the road are just making our team stronger.”

Elliot Evans is excited about this season and mentioned that he and his teammates have their eyes set on some records and they are eager to push themselves to achieve their goals. “After being stuck for a year of no competition with no coaches or teammates pushing us, jumping back into the flow of competing will be hard. This will be our biggest challenge, but it will bring us closer together as a team.”

Andrew Munster felt that last year’s team had prepared a lot and were confident in their abilities to succeed so there was disappointment when everything was cancelled. “Our work ethic is real and we all want to get better,” said Munster. “My goal is to beat every school record in the events I run.”

Emily Baggett is competing for the first time and Caleb Stein is returning after a hiatus. They both shared goals of getting stronger and better, hoping to improve times in their events. “My biggest challenge would be to push myself and not give up when something fails, but do the opposite and work harder,” stated Baggett.

Chandler Moore is also a new-comer and showing great promise in the shot put, according to Coach Morris. Moore wants to gain more distance in throwing at each meet and qualify to compete at the state level.

The Lady Cougar softball team was geared up for last season and confident that they would have one of the best seasons in years before the cancellation due to Covid took the wind out of their sails. However, the girls are eager to get this season started and while they are a young team with several new players, Senior Sarah Linville feels confident that they will be ready. “We have a lot of talent and I believe as a team we can learn from each other and become better ball players every single day.”

Taylor Galloway shared how shocking it was to lose their season last year. “I’ve never experienced any situation where the world just basically stops,” stated Galloway. She is looking forward to playing with this team again and has really missed her teammates. “My goals for this year are to simply get better and finish my senior year strong.”

Kamryn McMahon was sad when the season was cancelled last year “because I knew we would have accomplished so much.” Her goals this season are to get District and All-A Championships. She is looking forward to a great year and having fun on the field.

McMahon also shared that the team is somewhat short on experienced varsity players and states that the biggest challenge is not having Laila Bell. “She was a great third baseman,” said McMahon. Bell is recovering from surgery due to a torn ACL during basketball season and although she will not be joining the ladies on the field this season, she is still a member of this close-knit team and will be cheering them on from the dugout.

Bailei Walker just finished her final basketball season at McLean County High School and had several notable accomplishments on the hardwood. She feels the biggest challenge on the softball diamond will be having injured players, but “is excited to play with all the girls and experience a different sport.”

BaseballThe Cougars are a very young team this season with only three players having any varsity experience, but Head Coach Heath Hicks is excited to see this team back on the field. “They have kept at it through all the difficulties of the last year, worked extremely hard, kept a positive outlook and it’s time to see that hard work put to action.”

Senior P/IF Grant Lovell returns for his sixth season and is expected to anchor the pitching staff after having an excellent sophomore year on the mound. “When he’s not pitching, he’s also one of the most versatile players we have,” stated Hicks. “We can, and will, put him in a lot of different positions this season. He’s the ultimate team-first player and that’s what you need from a senior leader.”

Lovell shared that it was a very big letdown to the whole team after putting in all the time and hard work last year and not getting to play. He also noted the lack of experience at the varsity level, but added “I think we have the talent to set us in the right track.” Lovell is looking forward to playing and he is ready to get back on the field with a personal goal to pitch over 50 innings this year.

Junior CF Tyler Larkin and sophomore SS/P Cruz Lee join Lovell as the only other returning varsity starters and all three made the Kentucky High School Baseball Coaches’ Association 2021 State Preseason Watch List. “Together, they will bring stability up the middle defensively, which is key and they will also be our offensive spark plugs at the top of the batting order,” said Hicks.

Other key contributors for the Cougars this season will be juniors IF/P Will Logsdon and C/OF Kamden Level as well as freshman C/IF Connor Mitchuson. Eighth graders Ayden Rice and HB Whitaker will both be spending time on the mound for McLean County as well as playing in the infield.

A few of the goals the team has set for this year, according to Hicks, are to win the district tournament and make the regional tournament as well as to finish with a positive win-loss ratio. “I think the team did an excellent job setting these goals for the year and there’s no doubt in my mind that they can accomplish them and then some.”

The resilience of these teams in the face of the adversity faced over the last year is impressive. Excitement is high and these athletes are ready to return to what they love. We are finally off to the races and it’s time to play ball!!

9 Things to Remember for ‘Fear the Walking Dead’ Season 6B