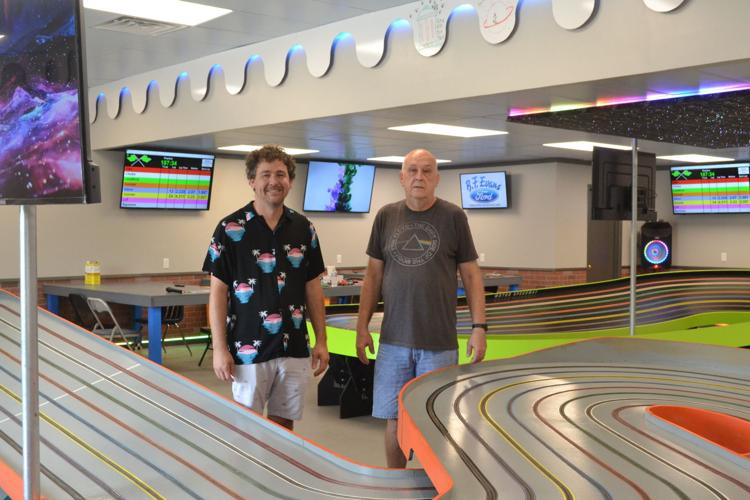 Donovan Kirtley, 36, of Livermore stands alongside his father, Randy Kirtley, 62, between two of the slot car racing tracks inside of Lanes Raceway, 631 Henton St. in Livermore. 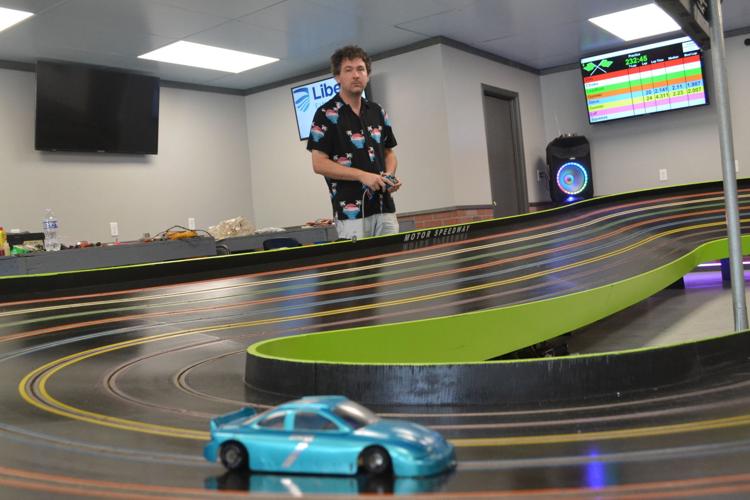 Donovan Kirtley prepares to drive a slot car around the Tri Oval track at Lanes Raceway in Livermore. 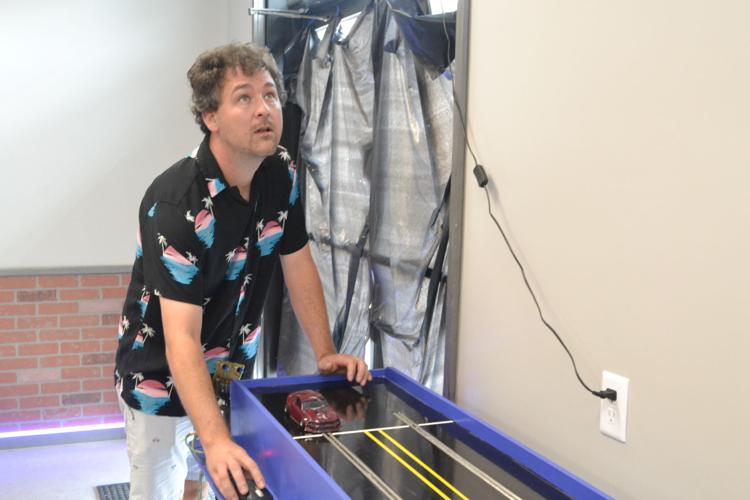 Donovan Kirtley sets up the dragstrip to race a car down Thursday at Lanes Raceway in Livermore.

Donovan Kirtley, 36, of Livermore stands alongside his father, Randy Kirtley, 62, between two of the slot car racing tracks inside of Lanes Raceway, 631 Henton St. in Livermore.

Donovan Kirtley prepares to drive a slot car around the Tri Oval track at Lanes Raceway in Livermore.

Donovan Kirtley sets up the dragstrip to race a car down Thursday at Lanes Raceway in Livermore.

The world of racing has always been in the blood of the Kirtley family based in Livermore.

At 11 a.m. Thursday, Aug. 4, brothers Donovan and Gabriel Kirtley will be bringing their love of the sport to McLean County with the opening of Lanes Raceway, a slot car racing facility in the former NAPA Auto Parts store at 631 Henton St.

Having purchased the building in December, Donovan Kirtley, 36, and Gabriel Kirtley, 38, started discussions about opening a track about three to four months ago to bring something to the community that they enjoyed as kids while also offering a part of growing up they feel is important to instill early on.

“Me and my brother (have) always been real competitive, like always trying to see if we can go better or go harder and everything else,” Donovan Kirtley said. “...That’s kind of what’s drove me and my brother ever since we (were) little ….”

“We’ve always been interested in computers and technology and … my grandparents had always (taken) me to dirt races and things,” Gabriel Kirtley said. “It’s kind of a little mixture of both in a way — kind of the technology side of it of the slot cars with the electronics and the motors, and then you have these racing aspects. Those two things have been a big part of my life ….”

Donovan Kirtley wants people to experience being able to earn a true win.

“...Kids nowadays go down here and play baseball — just from what I’ve heard from some of my friends that have kids — and they all get a trophy and nobody wins anymore,” he said. “I told (Gabriel) that’s a pivotal thing when it comes to kids growing up; they gotta learn how to lose.

“I learned how to lose when I was younger, and I didn’t like it … but eventually, after you lose so many times, you just know that it happens. It doesn’t become a part of you.”

Randy Kirtley, 62, the brothers’ father, became involved in slot car racing — racing powered miniature autos and other vehicles via grooves, or “slots,” on a pre-laid and color-coordinated track operated by hand controllers — in the 1960s when he said it was “at its peak” at a place in Island.

“(For a) little old town of 500 people, that was the thing to do for kids,” Randy Kirtley said.

Shortly after, many slot car facilities and hobby shops that offered racing started to dwindle, which Randy Kirtley partially attributes to high rent costs due to the amount of space that tracks typically require.

In the late 80s, Randy Kirtley recalls the family driving in Owensboro when he spotted an American Orange Monarch track, a large and common track, through a window of a hobby shop.

“Then we kind of got back into it,” he said. “We raced for three or four years.”

They were in good company — as some frequent racers at the shop were the Green brothers of NASCAR fame and others who have gone on to race competitively in other capacities.

The family didn’t get back into racing until the late-1990s when another slot car facility opened in Owensboro.

“Every night, I would come home from work, (and) they would be ready to race slot cars,” Randy Kirtley said. “...That got the bug started again.”

The new business offers two tracks and a dragstrip for people to race on — including a “scaled-down” version of the American Orange Monarch that the Kirtleys had used in their basement.

Since making the announcement of starting the business and putting in the work to get the space ready, Donovan Kirtley said that the community has been supportive of their efforts.

“As we kept progressing and kept coming (in) and doing it, I can see that it was meaning a lot to people, even before we got it open,” he said.

“You gotta have something that keeps kids (having) good, clean type fun,” Randy Kirtley said.

The hobby also encourages learning skills of routine maintenance such as cleaning, replacing braids and tires in order to have the car operate on the track to more advanced knowledge of replacing gears and motors.

“You get to learn about soldering the electric motors, cleaning the motors (and) keeping everything as clean as you can,” Gabriel Kirtley said. “The mechanical side is keeping the gears and the gear meshes as smooth as you can (to) basically keep the car where it can roll as free as possible and be straight as possible (where) it will handle.”

The facility will offer activities outside of racing, including pinball games and pool.

When in full operation, Donovan Kirtley said they will offer different weekly races divided up by class that will be streamed live on Twitch.

They will also have concession options and birthday party packages.

Even if you are not an experienced racer, the Kirtley brothers look forward to welcoming people with open arms.

“If people want to race, come on in. We’ll show you everything we know, because we want the highest competition possible,” Donovan Kirtley said. “...When you come in, I want to tell you everything that I know; that way when I beat ya, I can actually say I beat ya (or vice versa).”