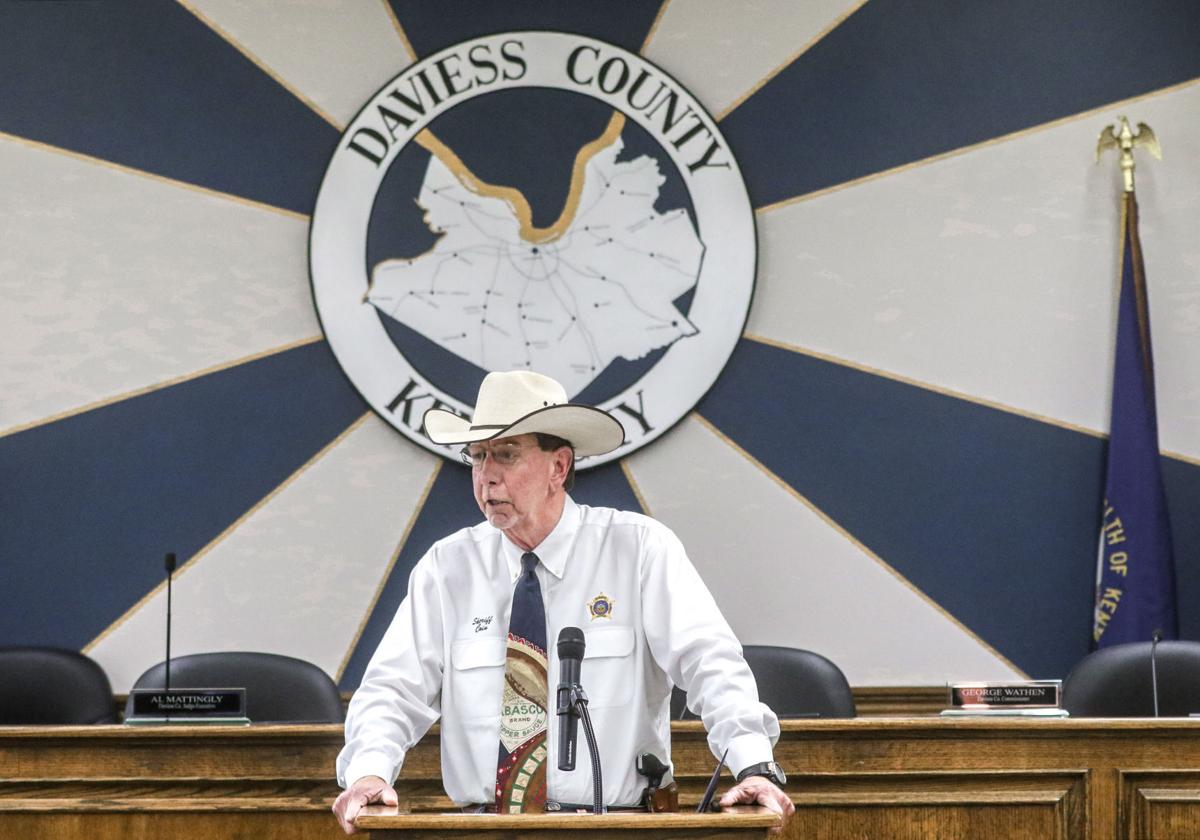 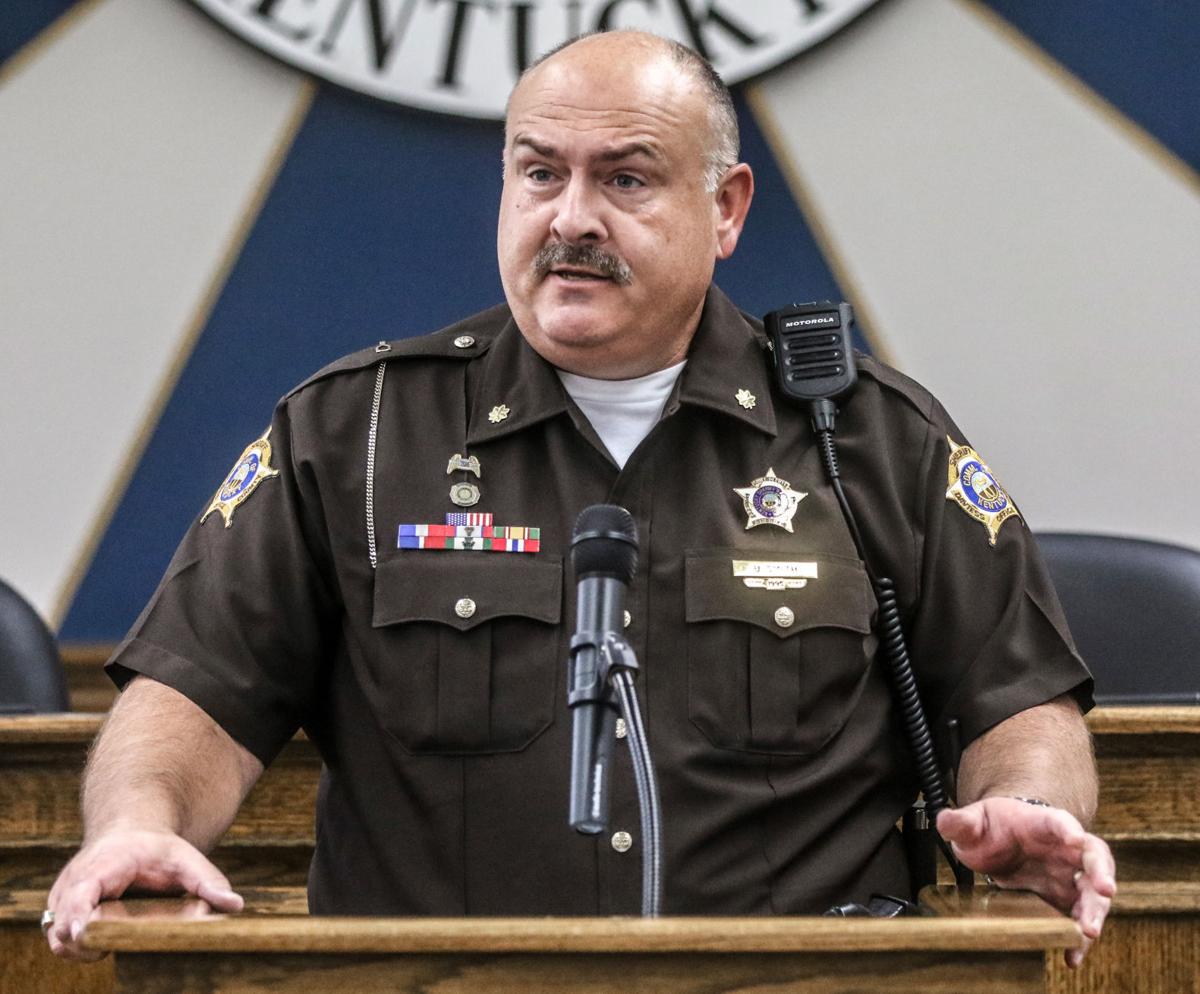 Maj. Barry Smith speaks during a press conference Oct. 21 after being appointed the new Daviess County Sheriff, effective after Dec. 1.

Maj. Barry Smith speaks during a press conference Oct. 21 after being appointed the new Daviess County Sheriff, effective after Dec. 1.

Daviess County Sheriff Keith Cain, who was first elected to office in 1998 and has served as county sheriff ever since, will retire from the office he has led for 22 years on Dec. 1.

Cain had previously announced his intention to not seek reelection in 2022. There will still be an election next year, although, thus far, Smith is the only candidate to have announced he is running for the office.

Cain told an audience of family members, county officials and sheriff’s deputies he plans to spend retirement being with his family.

“There are few things that have meant so much to me as serving as your sheriff,” Cain said. “One of those few things, and I guess the most important, is the time I spend with my family and my loved ones.

“If this pandemic has taught me anything, it’s that life is precious and that time with those you love can be fleeting,” Cain said. “With this in mind, I have decided, after much thought and prayer, to leave office before my time expires, to spend more time with those I have neglected for far too long.”

“I have never second-guessed my career a single time,” Cain said of his 48-year career. “There’s certainly nothing more rewarding and satisfying than having served the citizens of this great community.”

Cain thanked the members of the department, and said, “I would not be stepping down without the comfort that the office is in excellent hands.”

Later, Cain said, “I thank you from the bottom of my heart for providing this old boy from Newman the opportunity of a lifetime.”

State law gives judge-executives authority to fill a vacant sheriff’s position. Mattingly said after the presentation he has worked closely with Smith on a variety of sheriff’s department issues while Smith has been chief deputy.

While Mattingly interviewed candidates before he appointed Art Maglinger as county jailer in 2017, Mattingly said Smith was the only person he considered for the appointment.

“In this case, I had a relationship with Major Smith,” Mattingly said. “I have worked with him on public safety” issues since Smith became chief deputy.

Smith “shows a great understanding of all the financial aspects, as well as the law enforcement aspects of the office,” Mattingly said. “In my opinion, he is the man to take the position.”

Smith, who has been with the sheriff’s office for 27 years, has been chief deputy for five years. Smith told the audience: “I’m grateful for the opportunity to continue my service to the community ... I appreciate the sheriff’s confidence in me.”

After the event, Smith said he will be working with Cain to transition into the sheriff’s office over the next five weeks.

“The good thing is I’ve been working side by side (with Cain) as chief deputy for five years now,” Smith said.

The department has some major technology upgrades on the horizon, such as the launch of the 911 center’s new computer aided dispatch system next month. Also, a new digital radio system for county sheriff’s deputies, firefighters and responders is scheduled to go online next year.

“We’ll take everything a day at a time,” Smith said, adding “we are going to focus on making sure the new technology is put in place, and let everyone get used to it.”

Smith said he has been working toward his goal of becoming sheriff for several years.

“I look forward to leading the young men and women who (work for) our department,” Smith said. “Our staff is second to none in Kentucky.”

How Rep. Gosar's constituents reacted to the violent video he posted

Most rural counties in Kentucky

How Rep. Gosar's constituents reacted to the violent video he posted