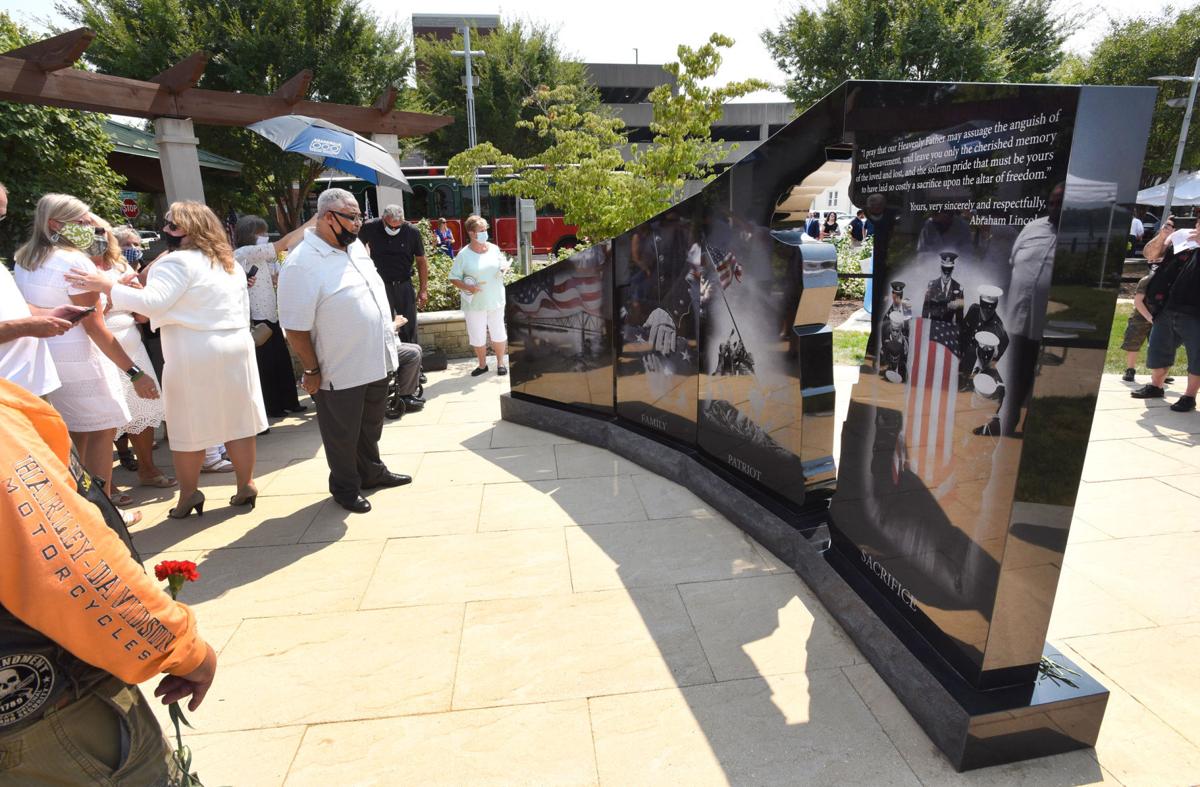 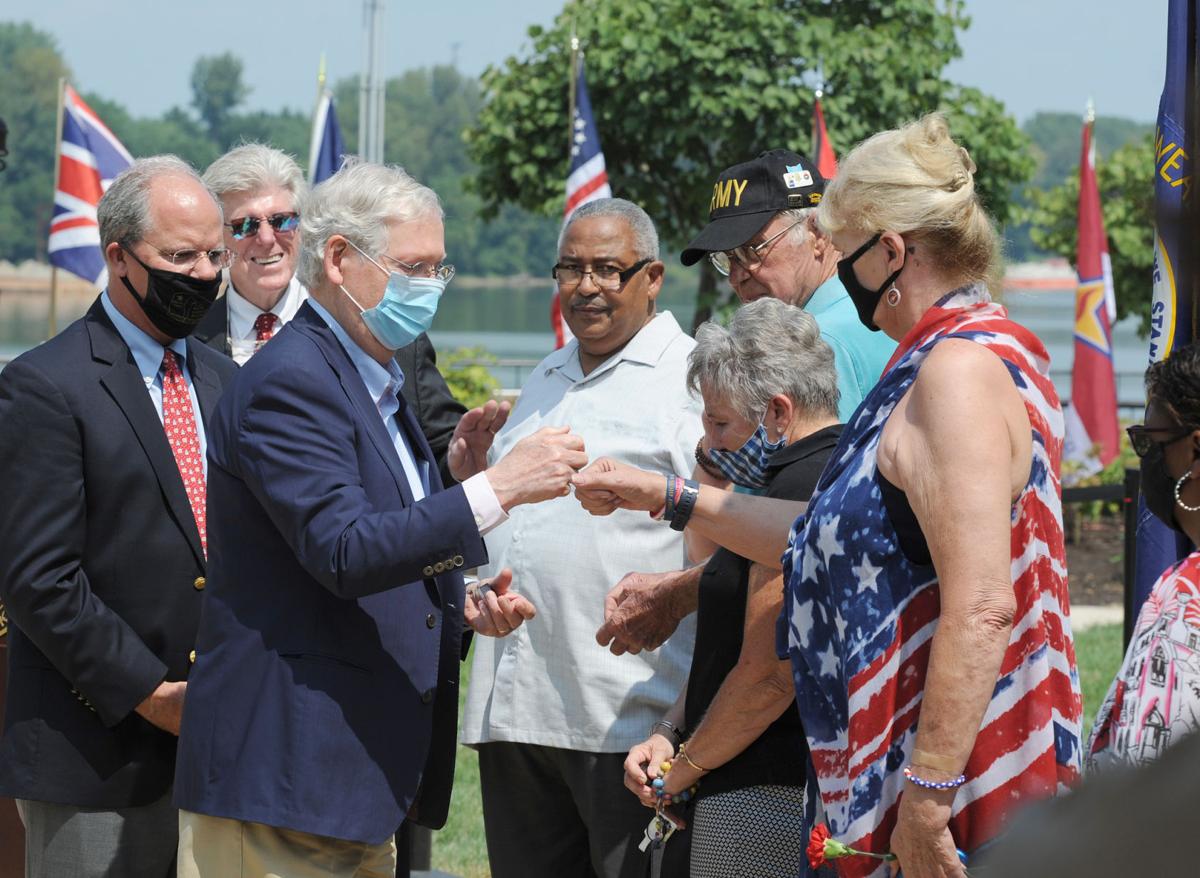 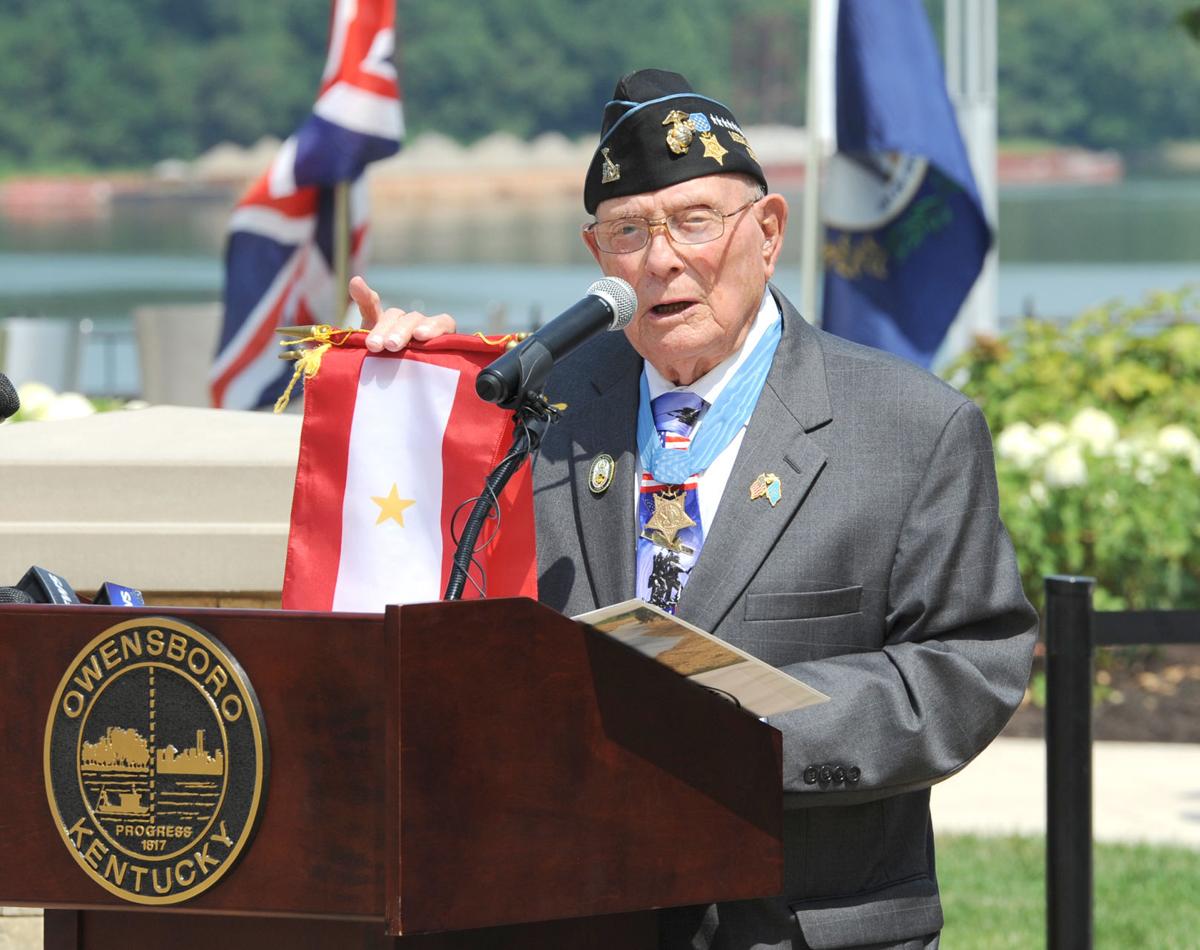 The event brought multiple Gold Star families to the riverfront, along with national elected officials such as U.S. Sen. Mitch McConnell and Rep. Brett Guthrie. The Gold Star Families, however, were the focus.

The monument was built in honor of families of service members who were killed on active duty. The Gold Star was created during World War I, and a family with a member killed during military service would place a gold star in the window.

The memorial drive was spearheaded by Cathy Mullins, the mother of Brandon Mullins, who was killed while on active duty in Afghanistan in 2011. Multiple community donors and agencies were also involved in creating the monument.

Major Mark Olson, who commanded Mullins in Afghanistan, was at Tuesday’s unveiling. On the day Mullins was killed, Mullins had volunteered to take the place of another driver, and was killed by an improvised explosive device, Olson said.

“He was a young man who meant a lot to me,” Olson said. “He was a kid I grew to love, and I definitely have grown to love his parents.”

McConnell, who is facing a reelection challenge this year, stayed away from politics in his remarks.

“All military families serve alongside those in uniform,” McConnell said. “They endure sacrifices, they shoulder burdens, and after tragedy creates another Gold Star Family, these heroes carry on their loved ones mission and legacy.”

Of the Gold Star families at the ceremony, McConnell said, “we are blessed indeed by their sacrifice.”

McConnell said, “Let us never forget these patriotic Gold Star families living among us. Our nation can never repay the heavy debt we owe, but we can reach out to them with our kindness, our prayers and our thanks.”

Rep. Brett Guthrie, talked about how his father’s 22 year-old brother was killed in the line of duty in 1952 during the Korean conflict.

“My dad talks about being a 12 year-old boy, sitting in his house … (with) his father gathering them all together to read a telegram telling him his brother wasn’t coming home again,” Guthrie said. “... I still get emotional about it.”

Guthrie said he remembered visiting the grave when he was 25, older than his uncle had been when he was killed. “It really put into perspective how young he was, how much of a life he had sacrificed that was ahead of him.

Video of his daughter's murder is circling on Facebook. Hear father's plea

“It’s important we’re here,” Guthrie said later. “It reminds me soldiers and sailors pay the ultimate sacrifice, but the families have to live with that. And it is not easy.”

The Rev. Larry Lewis, pastor of Mt. Zion Baptist Church, talked about his brother, who was killed in Vietnam in 1967.

“There’s a deep hole in all of the Gold Star Families’ hearts, because something has been taken from us we that love, that can never, ever be replaced,” Lewis said. “Memories never die. Although we lost our loved ones, memories will go on forever.”

Lewis commended the people who created and donated to the monument.

“The Gold Star Families, I say to you, God bless you for what you have done, because you did not have to do what you did to show your gratitude and appreciation to us,” Lewis said.

Hershel “Woody” Williams, who won the Medal of Honor fighting at Iwo Jima in World War II, told the audience the gold star in the window represents a loved lost while on duty.

“It’s our prayer that a time will come, it should be now, that we’ll have no more Gold Star flags,” said Williams, whose Medal of Honor Foundation has helped establish 64 Gold Star monuments in 48 states.

Of the Gold Star families, Williams said, “We know this memorial will not ease the pain, the heartache or the grief. But perhaps it will give some peace and solace to those who sacrificed one their most precious gifts, one of their own.”

The ceremony was the second stop McConnell made in the region Tuesday. Before stopping in Owensboro, McConnell was in Beaver Dam at its amphitheater to discuss the funds Ohio County Hospital receives through the CARES Act.

Ohio County Hospital is slated to receive $4.8 million out of the overall healthcare provider fund, as well as an additional $4.6 million PPP loan.

“So this top team here at this hospital didn’t miss an opportunity to take advantage of any of the provisions that were in the CARES Act,” McConnell said.

Avlon: To defend our democracy just follow the law

Avlon: To defend our democracy just follow the law