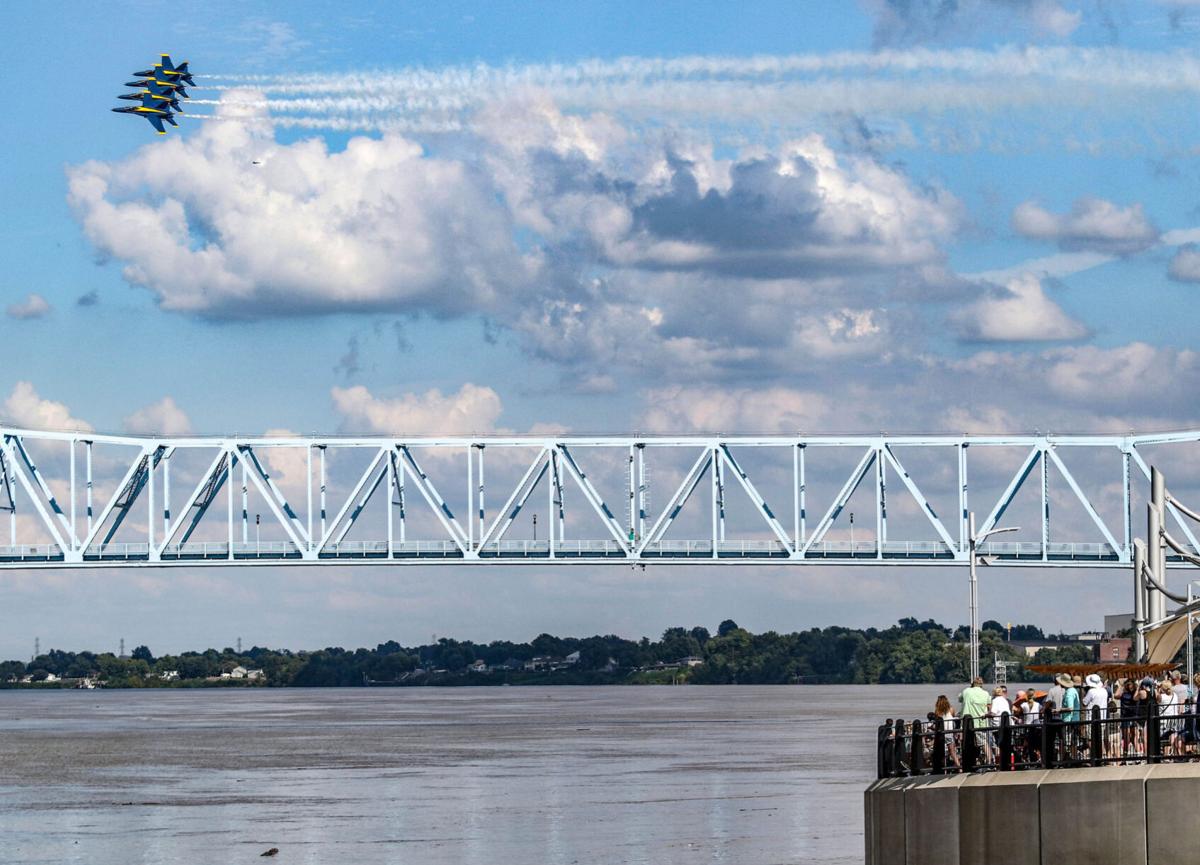 The U.S. Navy Blue Angels fly over the Glover Cary Bridge during the Owensboro Air Show on Sept. 15, 2018. 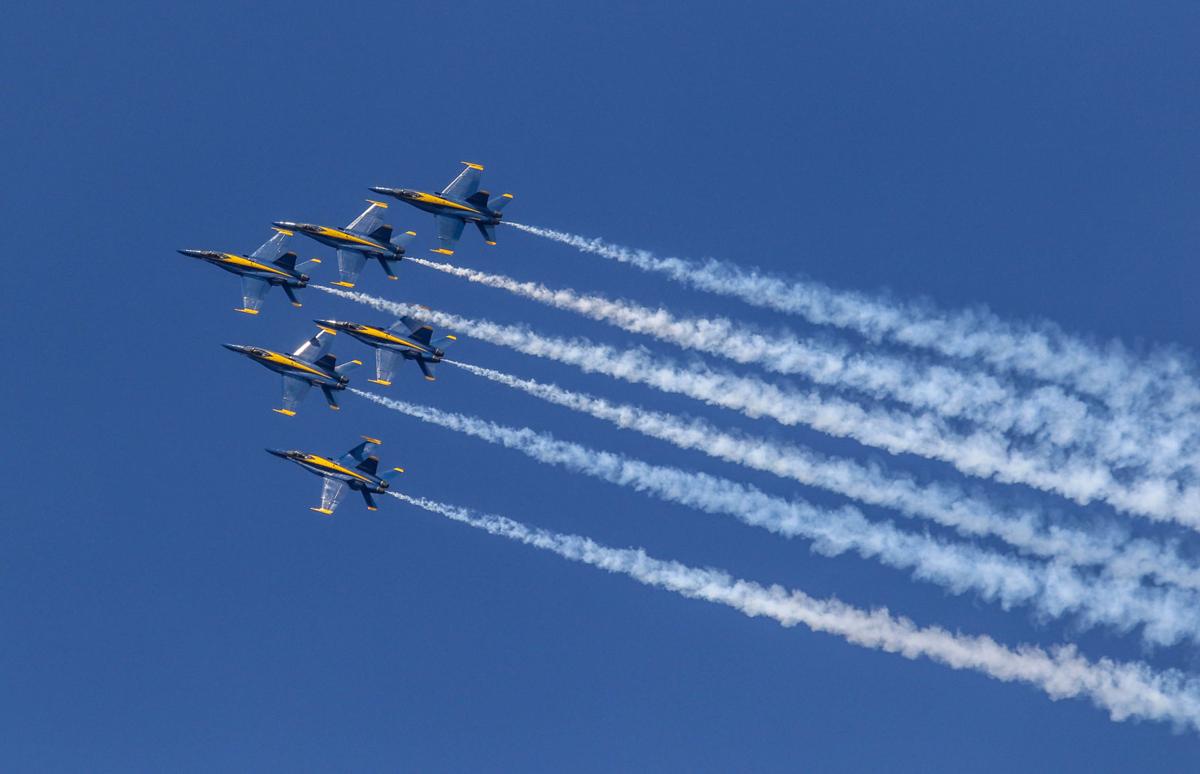 The U.S. Navy Blue Angels make a pass above smothers Park during the Owensboro Air Show on Sept. 15, 2018.

The U.S. Navy Blue Angels fly over the Glover Cary Bridge during the Owensboro Air Show on Sept. 15, 2018.

The U.S. Navy Blue Angels make a pass above smothers Park during the Owensboro Air Show on Sept. 15, 2018.

In September 2010, the Owensboro City Commission recommended the hiring of a public events director.

Then-Mayor Ron Payne said the city needed more emphasis on the promotion of downtown and more coordination between city venues “such as the RiverPark Center, Sportscenter, a proposed bluegrass center and the coming downtown convention and events center.”

Then-City Manager Bill Parrish proposed an annual budget of $123,000 and said the person selected would be the “ringmaster,” coordinating events at the various cultural and event venues.

In February 2011, Tim Ross, 38, president of his own event consulting and management firm in Tampa, Florida., was hired for the position over 50 other candidates.

Flash forward almost a decade and Ross and Erica Pedley, the department’s event coordinator, work with between 115 and 120 events a year.

Some of the work is helping with such things as Friday After 5 (which counts as 16 events), the International Bar-B-Q Festival and Downtown Cruise-Ins.

And part of it is with city-sponsored events like the Owensboro Air Show, Owensboro Hydrofair, Live on the Banks and the Trail of Treats.

The events he works on have an economic impact of several times that amount, he said.

In 2018, when the U.S. Navy’s Blue Angels performed for the Owensboro Air Show, they drew a crowd of

more than 70,000 people from several states over a three-day period.

“This was the largest attendance for the air show that we have seen at the (Owensboro) Convention Center since we opened,” Laura Alexander, the center’s general manager, said at the time. “All areas were sold out in advance, and we had to add an area this year to accommodate more people.”

“Tim Ross and his department go above and beyond in not only ensuring Owensboro’s events are sustainable, but also adding new events that are attractive for both a local and visiting audience,” he said. “They serve as both an amenity and a reason to make the trip to Owensboro.”

Ross said more than 80 events have been canceled this year because of the pandemic and its restrictions on crowd sizes.

2021 busy year“We’re hoping that crowd limitations will be lifted by spring,” he said. “Tens of thousands of people attend our events. If everything goes right, 2021 will be a very busy year.”

Ross said, “We hope to be back to somewhat normal next year. If we are, May through August should be very busy.”

The Great Race featuring 120 vintage cars is scheduled to roll into Owensboro in June on a 2,300-mile nine-day race from San Antonio, Texas, to Greenville, South Carolina.

Cars from Japan, England, Germany, Canada and all over the United States will be in the race, competing for $150,000 in prize money.

It was postponed this year by the pandemic.

The first Owensboro Hydrofair in more than four decades is scheduled for August, a week before the Owensboro Air Show, which will again feature the Blue Angels.

“Events like those will have a big impact on the community,” Ross said.

He said, “Several big conventions got pushed back to next year. So 2021 should be a good year for conventions.”

“It looked like a normal Friday After 5 night,” Ross said. “The restaurants downtown were full that night.”

Before he started his own company in Tampa, Ross was senior event manager with EventMakers Corp., a Tampa company that coordinated major corporate events, conferences and community festivals nationally, from 2000 to 2008.

From 1995 to 2000, he was event production manager with a Tampa-based nonprofit company organizing business and motivational seminars at stadiums, arenas and convention centers across the country.

The Fort Wayne, Indiana, native who grew up in the Port Charlotte area of south Florida, has a bachelor of science degree in interpersonal and organizational communications from Toccoa Falls College. a private Christian school, in Toccoa, Georgia.

In 2011, when he accepted the Owensboro job, Ross said, “When I saw the opportunity to move to a city in the middle of a revitalization, I jumped at it. We’re excited about moving to a city that has a more community-focused feel. The biggest thing is, Owensboro is a great city with so much to offer. It’s nationally ranked in some areas, with new parks, major festivals and new facilities.”

“He was bubbling with enthusiasm,” Parrish said at the time. “He was like a race car driver in a brand-new car. You could see his excitement.”

Here’s a sample of the annual events Ross works on today:

Way of the Cross

Run from the Cops 5K

March for Babies by March of Dimes

Live on the Banks

All American 4th of July

Monsters on the Ohio

“This is not a comprehensive list,” Ross said, “but it does list most of the annual events we have had over the last several years.”

He said, “In addition, there are typically another 15 to 25 events of different sizes that happen from time to time, are new or are a single-occurrence event each year.”