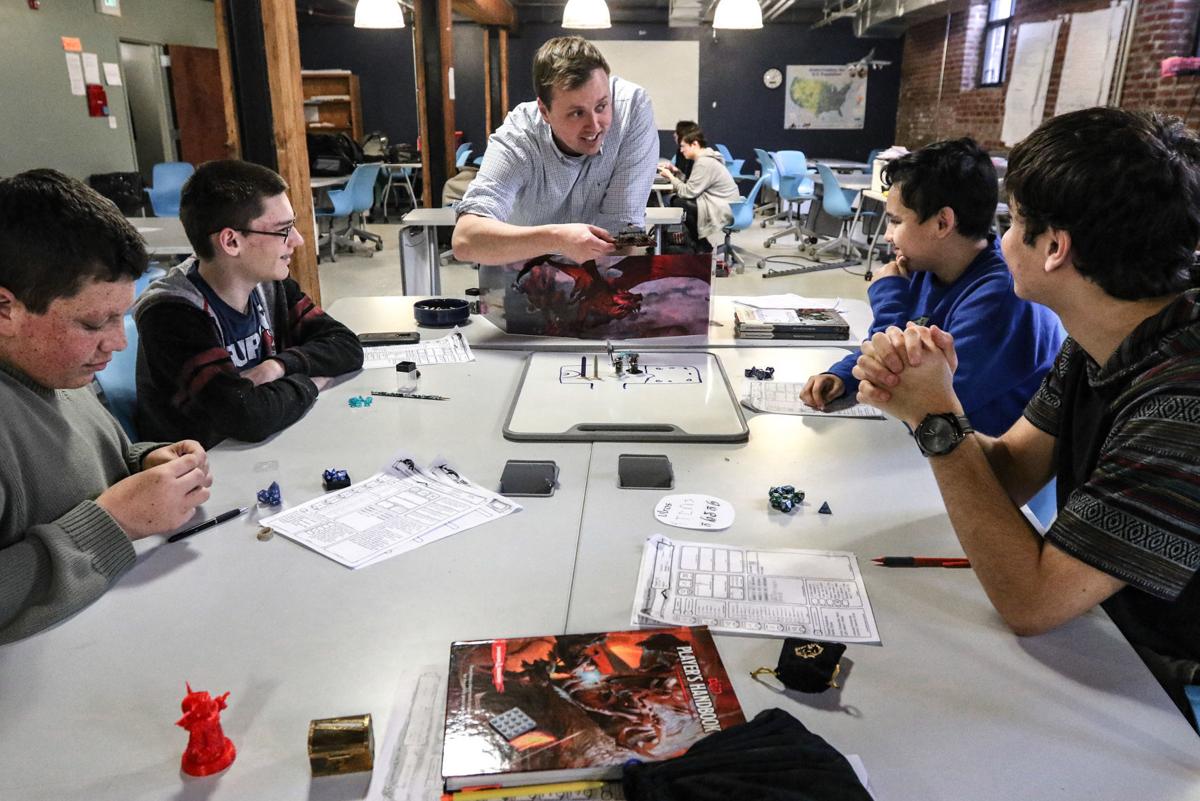 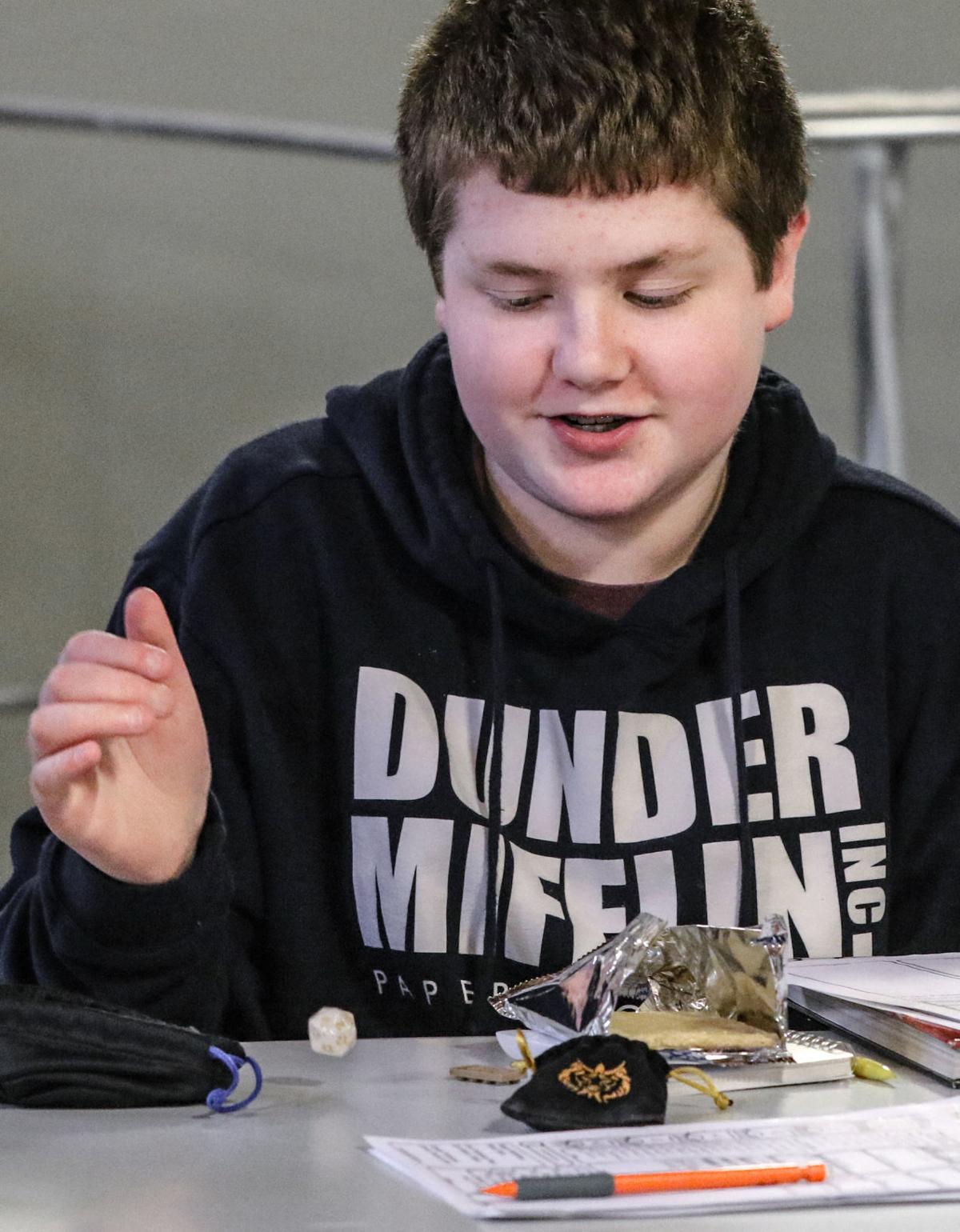 Last week, students in Jon Richard’s Dungeons & Dragons club had just successfully fought off an attack by dire rats, but were trapped by a poison cloud.

The students meet Tuesday afternoons in Richard’s classroom at Owensboro Innovation Academy. As Richard led the group as dungeon master, the students all called out different solutions to the problem. One grabbed the group’s mascot and ran for the door. Another turned himself into a turtle in a less-successful attempt to hide from the poison. A third ignored the gas draining away his life points and tried to fill his pockets with the gold spilling over the floor.

Finally, one of the students, seeing the problem as a nail in need of a hammer, smashed the canister spraying the poison, which, of course, made the gas spray out even faster.

To someone unfamiliar with Dungeons & Dragons, the session would have looked like five teenage boys in a frantic debate, punctuated by the occasional rolling of 20-sided dice. But Richard, an Innovation Academy world studies teacher, said the students come away from the game sessions with more than just entertainment.

“I think they’ve learned a lot of patience, and to listen to each other,” Richard said. “That interpersonal communication is where I’ve seen a lot of growth in this club.”

The freshman and sophomores in Richard’s campaign had learned “how to speak to one another and resolve” conflicts, Richard said.

“They’re learning about balance — everyone getting a turn and getting a chance to speak,” Richard said. And, smashed poison-filled canisters notwithstanding, the group has also picked up problem-solving skills rather than just “being able to take a problem and run at it headfirst,” Richard said.

Dungeons & Dragons, which has been around since the 1970s, has undergone a renaissance in recent years. Partly due to TV shows like “Stranger Things” and “The Big Bang Theory” that highlighted the game, D&D reached a mass audience at the same time a new edition of the rules made it more accessible to new players.

The Twitch series “Critical Role,” where a cast of voice actors play through D&D campaigns, is also very popular. That’s not just an opinion: The Critical Role-based D&D book, “Explorer’s Guide to Wildemount,” was the No. 1 preorder on Amazon.com in the weeks before its release, and is in the top 100 best-selling books on the site.

Educators who sponsor D&D clubs in Owensboro schools say the game helps students build skills that will help them in careers and life. Also, the game can be therapeutic

“One of the best things about a game like D&D is it rewards people for being with people,” said Adam Davis, a therapist who uses D&D to help children and young adults build social skills. “... When one is experiencing a setback and you overcome it as a group, that’s a great (feeling). It allows them to feel a positive connection with people.”

D&D is generally set in fantasy worlds where characters play warriors, wizards, rogues, druids and more, and participate in a story led by a game master. The dungeon master sets the “script” (by having a general storyline for the characters, which includes a series of missions or a quest), but the characters aren’t required to follow the DM’s path. D&D creates an open universe, where players can take any action and veer off in any direction they choose.

Not interested in going to the lost mine right now? Head for the local tavern instead. Or go hunting for owlbears in the forest. Or steal a pie from the town bakery. Or hire a ship and deliver a gift of gold to a dragon turtle.

TK Johnson has written and edited D&D books and adventures, and is DM on the Twitch series “Tales From the Mists.” Johnson, a Hopkinsville native, said D&D’s appeal came from being able to step outside ordinary life and do something extraordinary.

“There aren’t pieces of D&D where you aren’t able to see yourself as a hero,” Johnson said. In D&D, “if you see somebody doing something wrong, you are equipped to do something about it.”

There have been several changes to the rules over the years. The latest edition (Fifth Edition) emphasizes storytelling, with players encouraged to develop ideals, beliefs and even flaws for their characters.

Although the game has rules for combat, for sneaking, for persuasion and even for taming wild animals, most conflicts in the game are resolved by a roll of a single die. Instead of slavishly following the rules, game masters are encouraged to improvise.

“There has been a stigma that role-playing games were very fiddly and complicated,” said Brian Shown, who runs a weekly public D&D group at Big Bang Toys, Comics and Games at Towne Square North. “But with 5e, (a new player) can get hooked from day one.

“I think the biggest thing people have to get over is ‘you don’t know what to do and you think you’re going to be bad at it,’ ” Shown said. “Fifth Edition is really accessible … We are going to laugh, but with each other.”

“There’s a whole lot of stuff out there about the therapeutic value of D&D,” Beardsley said. Students who Beardsley thought might have had trouble collaborating in a group setting have instead fit right in.

“The thing I didn’t understand about D&D, because I didn’t play when I was younger, is what an egalitarian space it is,” Beardsley said. “... Your life outside the game doesn’t matter.

“Last week, we had someone play as a can of soup,” he said. “It’s good, it’s productive. It’s a way for them to blow off steam at the end of the day, and they may not know it, but they are exercising their creative muscles.”

Davis and colleague Adam Johns developed a version of D&D, “Critical Core,” specifically for working with children and young adults on the autism spectrum. Davis leads groups at Game to Grow in Washington state.

D&D, Davis said, is a way for young people to try on qualities they would like to have, such as when a normally quiet person plays an unapologetic barbarian.

In D&D, the group members often learn from watching each other, Davis said.

“We have kids who are really anxious and have trouble making decisions, and we have some kids who are impulsive,” Davis said. “Those players can learn from each other, (and) those opportunities are way more valuable than a top-down lesson coming from an adult.”

Beardsley said the middle school D&D group gives members a space of their own.

“Anything at school that makes it feel like home is awesome,” Beardsley said. “You don’t want school to feel like you don’t have any ownership or that it doesn’t belong to you.”

Johnson said playing D&D led to a career as a writer.

“My parents taught me to read with D&D manuals,” Johnson said. As a DM, Johnson brings newcomers into the game, including her sister, who Johnson thought was intimidated by the rules.

“(I said,), ‘you’ve played Skyrim, you know how to swing a sword,’ ” Johnson said. “The rule designer … says ‘follow your bliss’ a lot. There’s a lot of little rules I throw out the window.”

Because D&D is a shared storytelling game, the players have a large say in how the story goes. That can require a lot of improvisation on the part of the DM, but is also a large part of the game’s charm, Johnson said.

“Any way someone plays D&D is the right way, as long as everyone is having fun,” Johnson said.