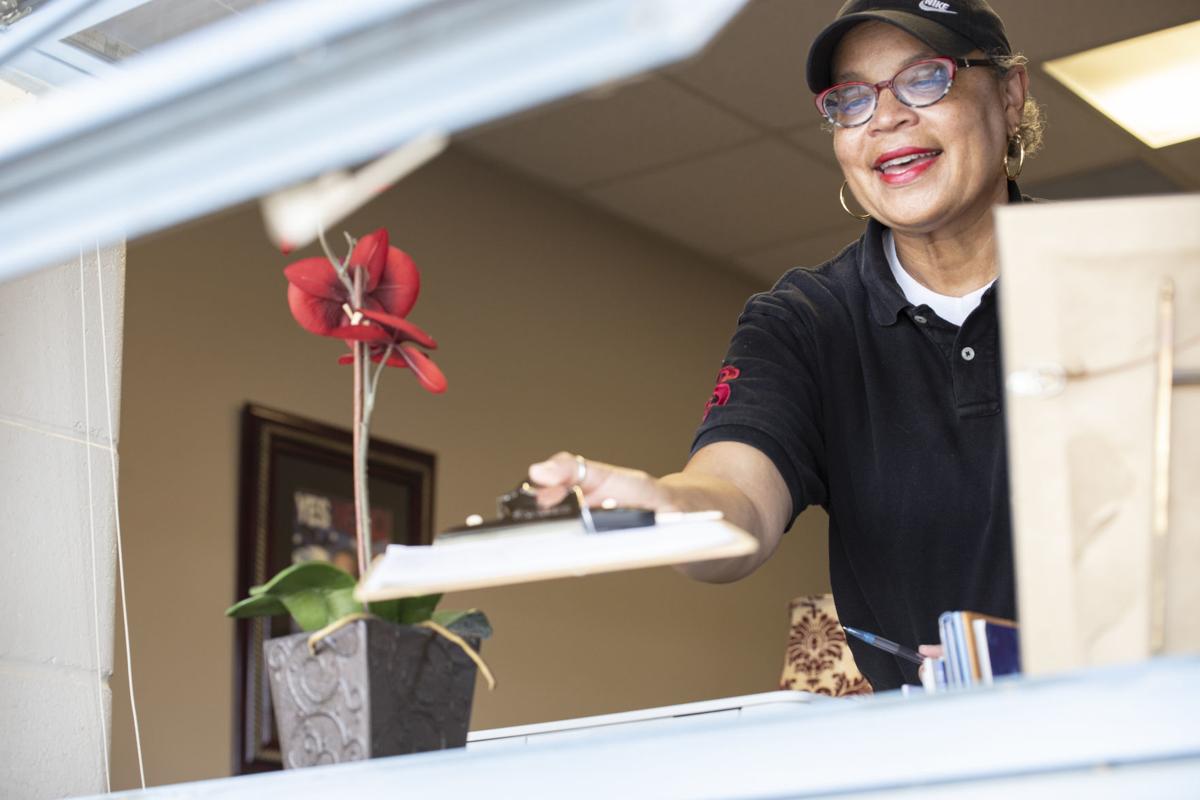 Olga McKissic handles operations for the Neblett Community Center through the sliding window in her office to accommodate for COVID-19. 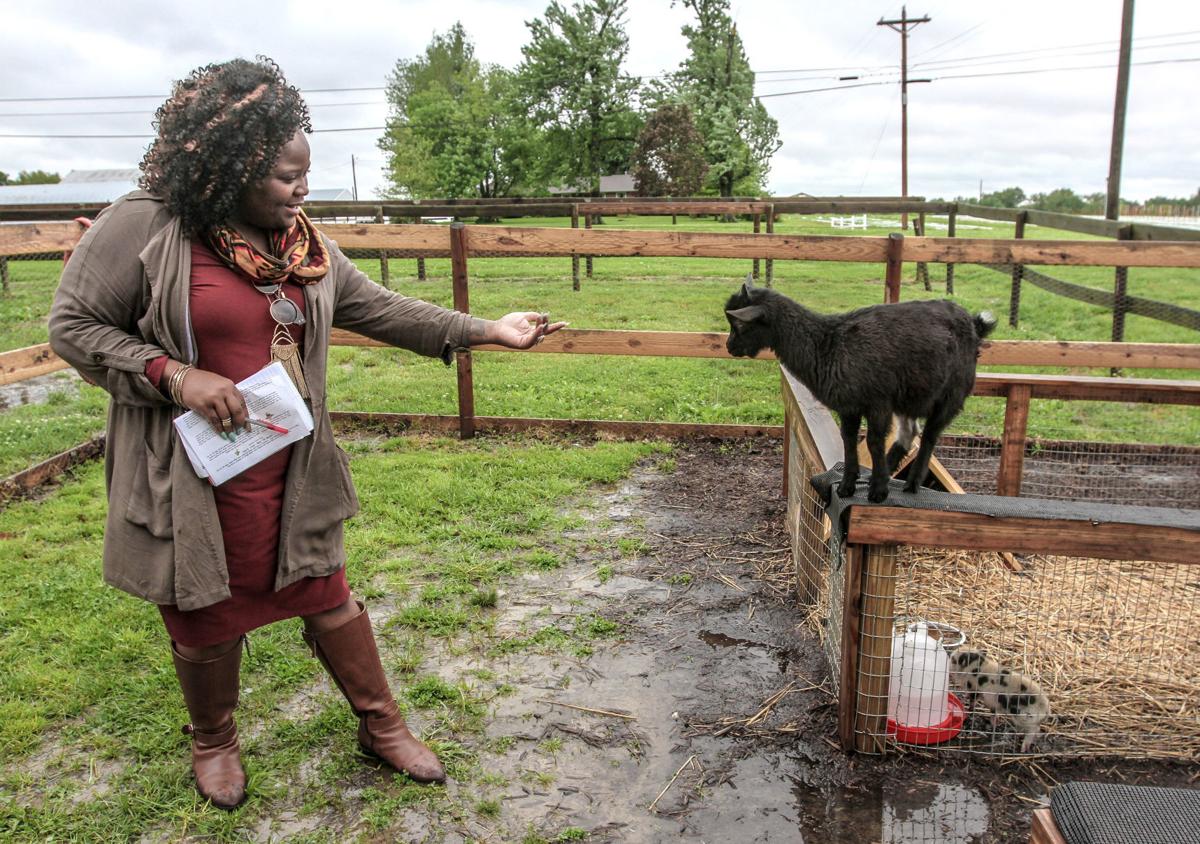 Angela Oliver is greeted by a friendly goat while reporting on the Animal Barnyard at Trunnell’s Farm Market for the Messenger-Inquirer on May 5, 2017. 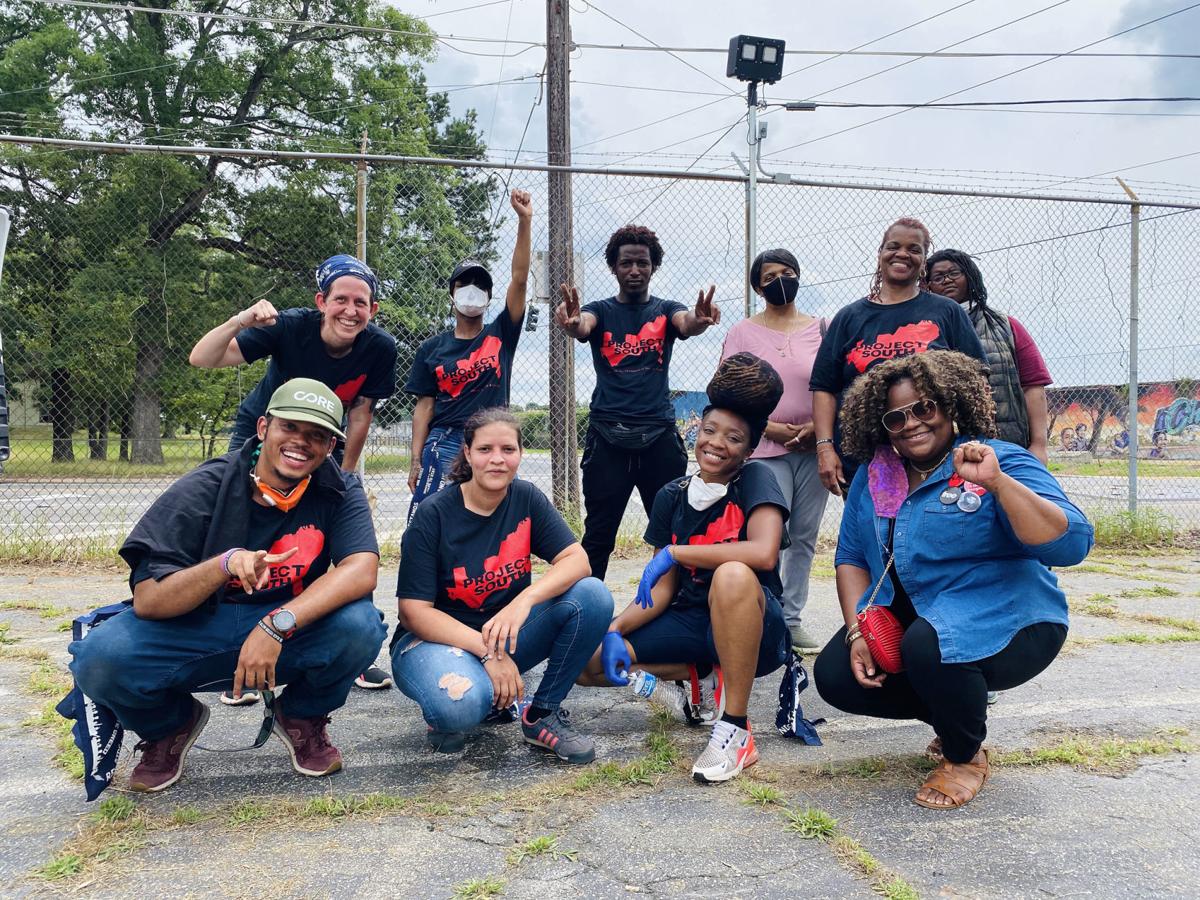 Angela Oliver, front right, with team that handled free COVID-19 testing by Project South in partnership with CORE, an organization co-founded by Sean Penn. The mobile site was geared toward protesters earlier this month in Atlanta.

Olga McKissic handles operations for the Neblett Community Center through the sliding window in her office to accommodate for COVID-19.

Angela Oliver is greeted by a friendly goat while reporting on the Animal Barnyard at Trunnell’s Farm Market for the Messenger-Inquirer on May 5, 2017.

Angela Oliver, front right, with team that handled free COVID-19 testing by Project South in partnership with CORE, an organization co-founded by Sean Penn. The mobile site was geared toward protesters earlier this month in Atlanta.

Olga McKissic was born and raised in Owensboro.

She and her five siblings eventually moved away in search of better job opportunities.

“I had to leave because I didn’t see the advancement I wanted here,” she said.

McKissic moved to Houston first, but ended up finding a rewarding and challenging career in Louisville. After retirement, she returned to Owensboro in 2015.

She loves her hometown, but the seemingly endless migration of well-educated Black professionals concerns her. They leave Owensboro for larger metro areas where diversity is appreciated, inclusion is not an afterthought and job opportunities for Black people abound.

McKissic wants local leaders to make strategic plans to retain the city’s Black talent and attract newcomers. Something needs to be done to create more cultural awareness and jobs with the promise of advancement for people of color, she said.

“If we really want to embrace the talents out there and share opportunities with African-American recruits, how are we doing that?” she asked.

She offered the Neblett Community Center to be used for training and educating Blacks as a way to reduce barriers to employment.

Other members of the community have mentioned the possible formation of a Black community alliance that would work to create job opportunities for people of color.

However, buy-in from the entire community is key, she said.

“We all have to work together,” McKissic said. “How can we do it together?”

Recruited, not retainedWhen Angela Oliver thinks back on the six years she lived and worked in Owensboro, she has fond memories — and not-so-fond ones.

For example, some people recoiled when she offered her hand for a shake.

A man once commented that Oliver’s hairstyle looked like she stuck her finger in an electrical socket that morning.

Upon meeting in person for the first time, someone said to Oliver, “I didn’t know you were Black.”

Oliver worked six years at the Messenger-Inquirer, first as a reporter and then as features editor.

Owensboro is a great place to live in many respects, she said, but it lacked diversity and cultural awareness.

In September 2017, Oliver returned to Atlanta. She’s now communications coordinator for Project South, a southern-based grassroots effort that helps grow social movements in an effort to end poverty and genocide.

Dominique Caminos-Davis grew up in Houston, but came to Owensboro to attend Kentucky Wesleyan College. Caminos-Davis lived here from 2012 to 2017.

When Caminos-Davis arrived in Owensboro, she noticed right away she didn’t see many people of color. She hoped to be an agent of change, opening doors for more Blacks to come.

At KWC, she helped reinstate the Black student union, and she tried to bring Black sororities and fraternities to campus.

As a marketing intern at the Owensboro Convention and Visitors Bureau, Caminos-Davis hosted the bureau’s first diversity committee and invited city leaders to attend. Also, she found sponsors for 10 minority students to attend Rooster Booster meetings.

“It was always a struggle trying to find a space for Black people,” she said of her time in Owensboro.

No one seemed to take diversity seriously, Caminos-Davis said.

“There are people in leadership who know things need to change, but there are other key voices that prevent it. Leadership needs to change,” she said.

In the end, Caminos-Davis moved from Owensboro because of a lack of job opportunities and an emotionally painful incident that involved her then 3-year-old daughter.

At an event, a child came up to Caminos-Davis’ daughter and said: “My parents don’t like brown people like you.”

Her daughter started to dislike her looks, Caminos-Davis said. “She thought she wasn’t beautiful.”

While Caminos-Davis could take verbal barbs, she couldn’t subject her daughter to them. Leaving Owensboro was the solution.

Rhondalyn Randolph has faced local workplace discrimination, which she felt was based on the color of her skin.

In Louisville, she was paid well as an office manager.

After a divorce, she wanted to raise her kids in a smaller city, so she returned to Owensboro.

At one point, Randolph found work as a temp for a local mortgage company that is no longer in business.

Although she had more prior office work experience and had been with the mortgage company for a while, the permanent job she hoped to land went to a new hire who was Caucasian.

“They gave her my desk and said I had to train her,” Randolph said. “When I wasn’t training her, I didn’t have a desk and was put on the copier.”

At another job, Randolph learned she was making $4 less an hour even though she did the same job and was hired at the same time as her colleagues.

“I’ve had to learn how to navigate my way through this maze,” she said.

Randolph wants Owensboro leaders to make an intentional effort to recruit Black professionals — teachers, principals and firefighters. About three years ago, her daughter was the first Black female firefighter in Franklin, Tennessee.

“She felt like she couldn’t do that here,” Randolph said.

Owensboro is a wonderful place to raise a family, she said, but Blacks fight many uphill battles here.

“We need to educate our community on cultural differences and things we have in common,” she said.

Clay Ford, chair-elect of the Greater Owensboro Chamber of Commerce board of directors and a partner at EM Ford, agrees.

“Our business leaders should know that diversity is the heart of a strong, forward-thinking organization,” Ford wrote in a June 21 Messenger-Inquirer business column.

“As a Chamber of Commerce, we know that talent recruitment and retention in Owensboro can be hampered by a lack of diversity,” he wrote. “Job creators and innovators want to live in a community where everyone is welcome.”

“It taught you how to meet people and learn different cultures and customs,” Searcy said.

He came to Owensboro to attend KWC and was the first member of his family to earn a college degree. After graduating, he stayed here — a welcome reprieve after a lifetime of moving.

Searcy has worked at the Owensboro Family Y, Horizon Youth Services Job Corps in Muhlenberg County, Daymar College and Neblett Community Center. He’s now the vice president of community living options at Wendell Foster and serves on the chamber board.

Keeping Black professionals in Owensboro boils down to job opportunities, he said.

Rarely a day goes by that Searcy doesn’t talk with someone about ways to retain Black talent, reduce racial bias and create cultural awareness. Local leaders need to find ways to welcome Blacks and help them build a life here, he said.

Searcy hopes to be part of the solution.

For the past three to four years, he has worked to develop a minority economic development task force. He hoped to launch it on Juneteenth, or June 19, but the project wasn’t quite ready.

“I know people in Owensboro, both black and white, who have a great heart and are willing to fight the good fight,” Searcy said. “This city has potential to become a great place for everyone to live, but we all must be willing to fight this problem together for substantial and lasting progress to be made.”