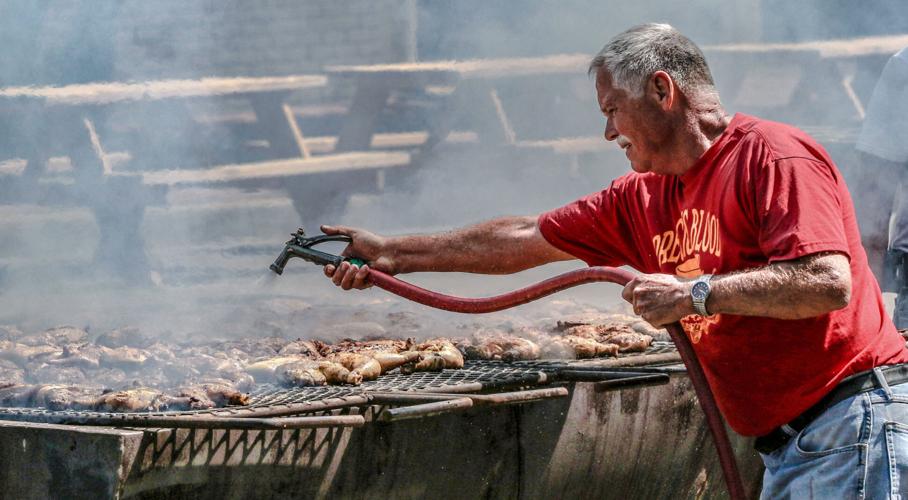 Steve Cecil, with the Precious Blood Cooking Team, hoses down the flames in a pit the team is cooking chicken leg quarters over on Friday during the Bar-B-Q Block Party in downtown Owensboro. 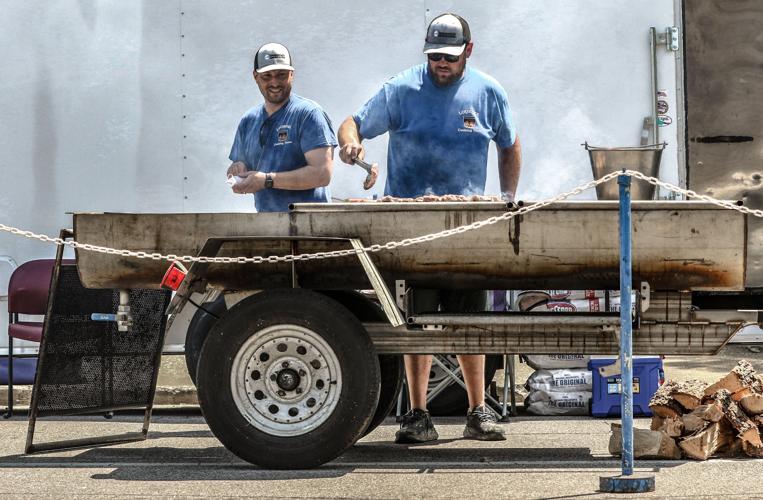 Iain Howard turns pork chops on Friday as Our Lady of Lourdes Cooking Team teammate Jordan Sowicz looks on during the opening day of the Bar-B-Q Block Party in downtown Owensboro.

Steve Cecil, with the Precious Blood Cooking Team, hoses down the flames in a pit the team is cooking chicken leg quarters over on Friday during the Bar-B-Q Block Party in downtown Owensboro.

Iain Howard turns pork chops on Friday as Our Lady of Lourdes Cooking Team teammate Jordan Sowicz looks on during the opening day of the Bar-B-Q Block Party in downtown Owensboro.

Several hundred people strolled up and down Second Street late Friday afternoon, taking in the sights and sampling the food from church cooking teams, local food trucks and downtown restaurants.

The second annual Bar-B-Q Block Party was off and running.

Crowds weren’t as large as they were for the International Bar-B-Q Festival, which filled downtown with hickory smoke and fans from across the country and even a few other countries on the second weekend of May from 1979 through 2019.

The coronavirus pandemic stopped large crowds from gathering in 2020 and 2021.

Last year’s event was basically only one day and chilly temperatures held the crowd down.

But this year’s Block Party is bigger than last year’s.

And next year’s will be even bigger, Allen Payne, festival chairman, said Friday night as he watched the crowds in the street.

“It’s bigger than I expected,” he said.

Crowds had started turning out downtown at noon when the festival opened.

Payne said the church cooking teams that once cooked tons of mutton and chicken along with hundreds of gallons of burgoo are just cooking small amounts now to sell to people throughout the event.

The big pits probably won’t be back, he said.

Payne said the teams’ members are getting older and younger people aren’t stepping up.

“When your youngest team member is 58, there’s a problem,” he said.

Tim Molnar, with the Precious Blood cooking team, said cooking smaller amounts for sale is much easier on the teams.

Last year’s sales were “pretty slow,” he said, “but it’s picking up this year. We had a good crowd at lunch.”

Only four church teams are participating this year.

There is no longer competition to name the best barbecue team and to present the trophy that goes with the title.

How Herbal Supplements Sent One Woman to the ER

Eddie and Diane Randolph had driven over from Muhlenberg County.

They had already eaten at the Block Party by 5 p.m. and were getting their exercise walking around and looking at the various booths.

“It seems pretty nice,” he said.

Three buskers — Brandon Harper of McLean County, Matthias Bartley of Owensboro and Adam Herron of Bowling Green — were playing jazz on the corner of Second and St. Ann streets.

Carnival rides and a corn dog and funnel cake stand were down by the Glover H. Cary Bridge.

Payne said the committee is cutting back on carnival food and bringing in more local restaurants, food trucks and barbecue stands.

Saturday, he said, will see 34 backyard barbecue cooking teams set up near the Owensboro Convention Center, competing for prize money.

Some of them will serve samples to the crowd.

Picnic tables are set up along Second Street for people to sit down and rest while they eat.

Competitive-eating champion Joey Chestnut will be a celebrity judge for the Backyard Cook-Off competition and will hold a “Meat and Greet” from noon to 1 p.m. by the Kentucky Legend sampling tent in front of the Bluegrass Music Hall of Fame & Museum.

For more information about the event, visit bbqfest.com.

The event was created in 1979 to promote Daviess County barbecue.

He hired a PSYCHIC to contact his DEAD PIG?! Which stars believe in clairvoyance, tarot and crystals?