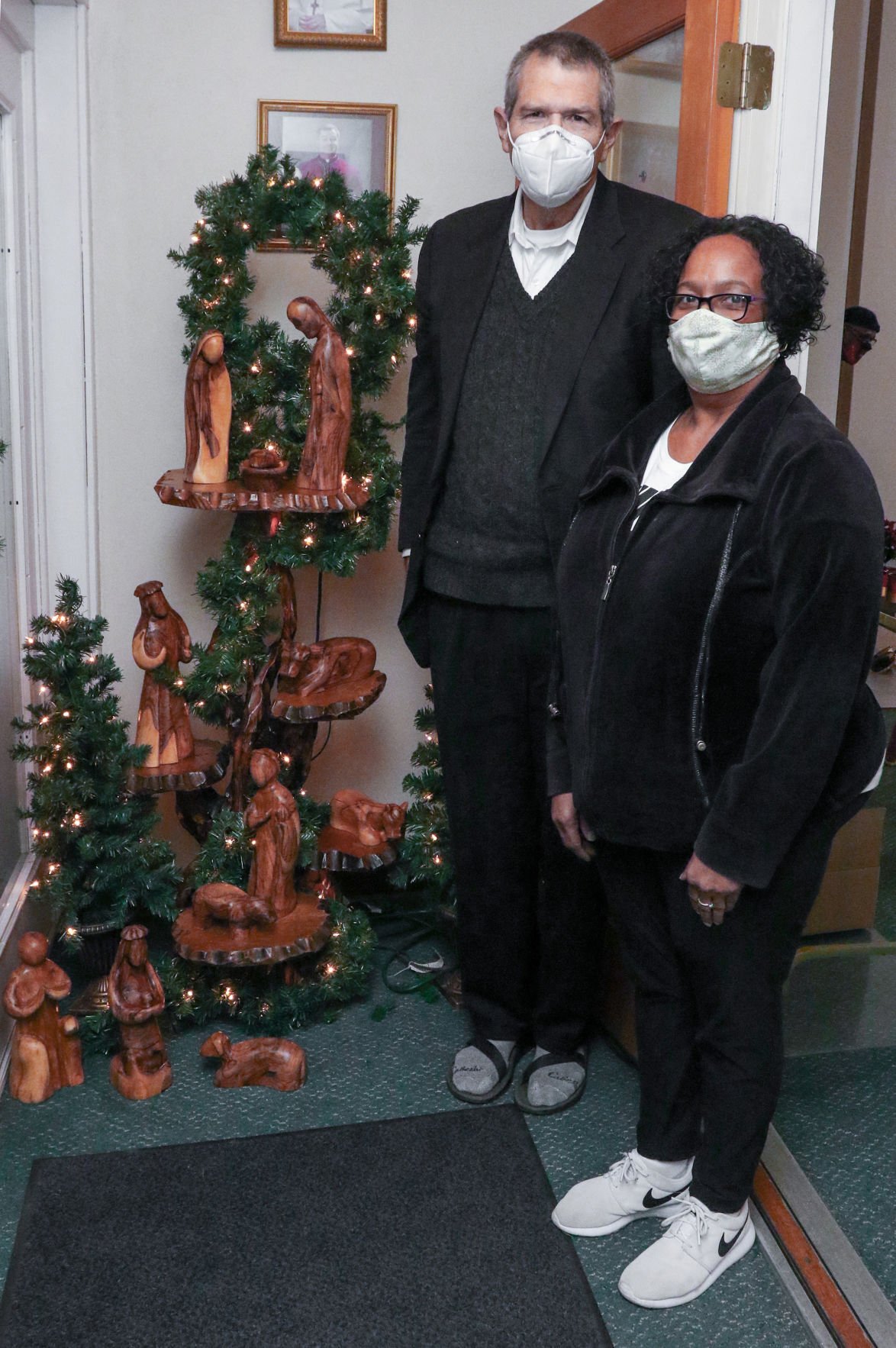 The Rev. Ray Clark, right, and Barbara Hammond, with Blessed Sacrament Chapel, stand with an olive wood Nativity scene that Clark brought back home from Bethlehem. He donated the Nativity scene to the chapel after living in the Holy Land from September 2017 to April 2018. 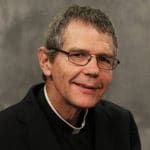 As we celebrate Christmas, it is helpful to recognize that Christmas consists of both the event itself — the birth of Jesus — and the circumstances that surround it.

If I were pressed to describe the circumstances surrounding Jesus’ birth in a single word, that word would be “Bethlehem.” During the seven months — September 2017 to April 2018 — that I lived in the Holy Land, I visited Bethlehem weekly. I would like to share an experience that I believe captures the essence of how God works in Bethlehem.

I lived in an apartment in the Old City of Jerusalem. Down the street lived a group of Mother Teresa’s Sisters, the Missionary Sisters of Charity. We attended Mass each morning at the Church of the Holy Sepulcher, where Jesus was crucified, buried and rose; it was a six- minute walk.

As we came to know each other, I offered to assist them in their ministry. They explained that they visited individuals and families in their homes and that it wasn’t conducive to bring in others. However the Sisters in Bethlehem had a home where developmentally, mentally handicapped men lived.

The Bethlehem sisters welcomed me.

The sisters in Jerusalem gave me directions to their home in Bethlehem — “walk along a long wall and you will come to a small sign marking the sisters’ residence.”

I was familiar with a long wall north of the Church of the Nativity, which is built upon the spot where Jesus was born. I was sure that the sisters lived along that wall.

However, as I walked along the white wall, there was no sign. Perplexed, I returned to Manger Square, the large square in front of the Church of the Nativity, and stopped at a souvenir stand to ask if anyone there knew where the sisters lived. None of the men knew.

At the side of the stand stood a blind man holding in his hands a crystal rosary that he was selling. Many physically handicapped and others in Bethlehem make a living by hustling — doing whatever they can to earn a little money.

He had overheard our conversation and said to me: “I know where they live. I’ll take you there.” I was skeptical: How could this man, who was blind, lead me to a place that I, a person with sight, couldn’t find?

With some reluctance I agreed to allow the blind man to take me to the sisters’ home. As he tucked his arm in mine and led me off, the men in the souvenir stand stared in disbelief. I could read their expression: “Are you crazy?”

We headed through Manger Square due south, in the exact opposite direction of where I was certain the sisters lived.

Every minute I asked: “Are you sure we are going in the right direction?” We kept walking. Inside I felt like a horse with a bit in its mouth pulling against the rider’s commands: “Are you sure you know where we’re going?”

We came out of Manger Square and proceeded down a steep hill — we were lost, I knew it!

Within a block, we were walking down a street with a dingy gray wall on our left. There at the end of the wall a small sign marked the sisters’ home. The blind man led me where I needed to go, in the exact opposite direction I expected.

This is how God acts in Bethlehem: He does the exact opposite of what we expect to get us where we need to be.

We see this the first time in the Bible we encounter Bethlehem, in the First Book of Samuel, chapter 16. God is sending the prophet Samuel to Jesse in Bethlehem. There, among the sons of Jesse, Samuel will find the man God has chosen to take the place of King Saul, who had been unfaithful.

As Jesse lines up his sons, Samuel comes to the first-born son and thinks: “Surely, this is the one God has chosen.”

As Samuel goes down the line of Jesse’s sons, none has been chosen by God. Samuel asks Jesse: “Have you any more sons?” Jesse replies that there was another son, the youngest, who was tending the sheep.

This is primogeniture in action — the custom that the first-born son receives the privileges. This youngest son didn’t rate to be included with the other sons.

“So they sent and brought him. He was ruddy-cheeked, bright-eyed and handsome. And the Lord said: ...this is the one.”

Samuel anointed him and the Spirit of the Lord gripped him from that day on.”

God violates custom and chooses not the oldest but the youngest son to be king of His people. In that day, the king of Israel was often referred to as God’s son.

The next time we hear of Bethlehem comes at the birth of Jesus. To appreciate God’s choice of Bethlehem, we must know the competition. Where else could God have chosen? The obvious answer is Jerusalem, some 8 to 10 miles away.

Jerusalem is the city David made his capital; to this day it remains known as “the city of David.”

Jerusalem was home of the Temple, the dwelling place of God among His people on Mount Zion. Perhaps the most profound experience of my time in the Holy Land was to pray the Psalms in Jerusalem — minutes away from the site of the Temple where many of the Psalms were composed.

A friend there described Jerusalem to me as “the place where heaven and earth meet.” Ostentatious, but true. Like one I have loved, Jerusalem remains with me.

I must admit my relationship with Jerusalem was a love/hate affair. The frenetic pace of life in Jerusalem disturbed me. I saw people running — not to catch the bus or train, not jogging, running seemingly to nowhere. It is certainly not what I am accustomed to here in Owensboro.

Bethlehem, on the other hand, is laid back; I was comfortable there. Bethlehem is the plain sister who always felt less than her dazzlingly beautiful, intelligent sister Jerusalem. However, God chooses for His Son to be born not in Jerusalem, the no-brainer as it were, but in lowly Bethlehem.

As we came to the end of the ride and stepped off, we were swarmed by taxi drivers — once again, those who survive by hustling. I occasionally enlisted a taxi driver to assist me as I bought fresh fruit to take to the sisters.

The drivers were always helpful — they negotiated with the vendor a fair price for the fruit and drove me to the doorsteps of the sisters’ home.

However, most of the time I walked the 2 miles to the sisters’ home.

Bethlehem is as hilly as its sister, Jerusalem. At first, I passed by small shops and market stalls buzzing with activity.

Parked alongside the street were 30-year-old-Toyota compacts held together by baling wire. There were stalls with fruits and vegetables, with live animals ranging from chicken to sheep.

Both the cobblestoned street and the quality of merchandise rose as I continued on, led by the steeple of the Church of the Nativity, just as the star had once led the Magi centuries before to the infant Jesus.

The contrast between Bethlehem and Jerusalem is marked: In Bethlehem, people speak Arabic; in Jerusalem, Hebrew. Bethlehem feels like a town, Jerusalem like a city. At the time I lived there, the economy of Jerusalem was thriving; Bethlehem depends upon outside sources such as pilgrims and the aid of other nations. There is a certain humility in Bethlehem.

I frequented Milk Street, which runs alongside the Church of the Nativity. It takes its name from the legend that a drop of milk fell from Mary’s breast as she was nursing the infant as they fled by night from Bethlehem, as the angel warned by the angel that King Herod sought to kill the baby. A church, known as the Milk Grotto, marks the spot. Couples who seek to conceive a child, often come.

Sixty years ago the majority of Bethlehemites were Christian. Under what the citizens of Bethlehem to a person call “the Israeli Occupation,” those who had more resources emigrated to other countries where more opportunity existed.

The Gospel of Luke provides the circumstances of Jesus’ birth.

That there was “no room for them in the inn,” local places of lodging. Jesus was born in a cave, of which there are many in the area of Bethlehem. The animals would have been toward the entrance of the cave; Mary would have given birth in the recesses of the cave.

Luke describes the birth of Jesus in two verses and spends the next 10 verses describing angels’ appearance to the shepherds in the fields.

Once again. God entrusts the most the news of the most significant event in human history not to the powerful but to those on the lower rungs of human society. Nonetheless the word gets out.

I had the privilege of spending Christmas Eve night in Bethlehem with the De La Salle Brothers at Bethlehem University. When the activities of the night had passed and I was alone in my room, I looked out the window on an empty street illumined by street lights in the middle of night.

All was quiet, all was still.

I believe that it is in these Christmas Eve moments when all is quiet and still, we await the coming of the Savior. We open the door of our hearts so that He may enter.

The carol “Silent Night” is especially appropriate at this Christmas of 2020.

When the organ of a German parish was broken and unavailable for Christmas, the pastor wrote the hymn for the much simpler instrument, the guitar.

God likes to show up in those times and places we least expect Him. May He show up in our lives and the lives of our families, our hometown and state, our nation and our world.

May our hearts be open to let Him in.

The Rev. Ray Clark is a priest of the Diocese of Owensboro.

The Rev. Ray Clark is a priest of the Diocese of Owensboro.