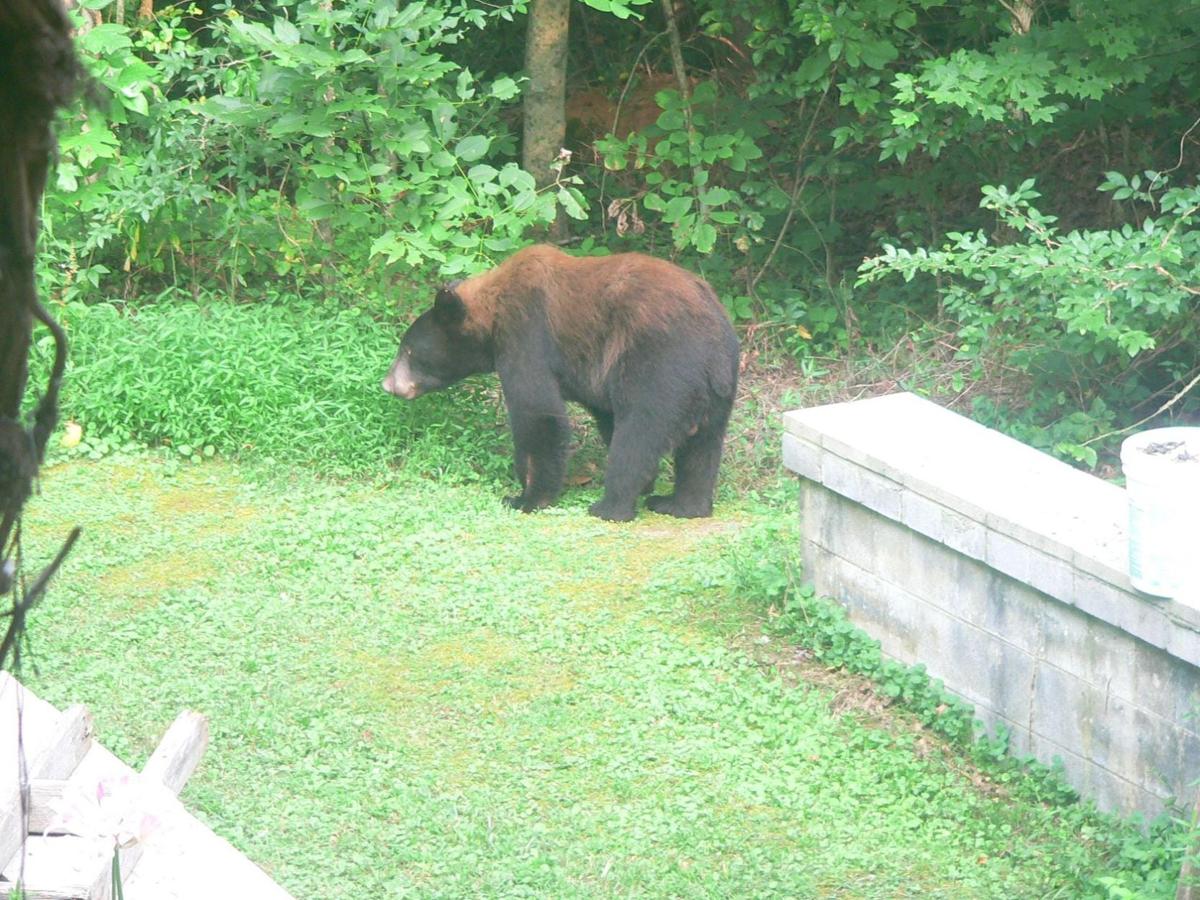 This black bear has made its way to Hopkins County after being spotted in Henderson, Webster and Caldwell counties in the past week. 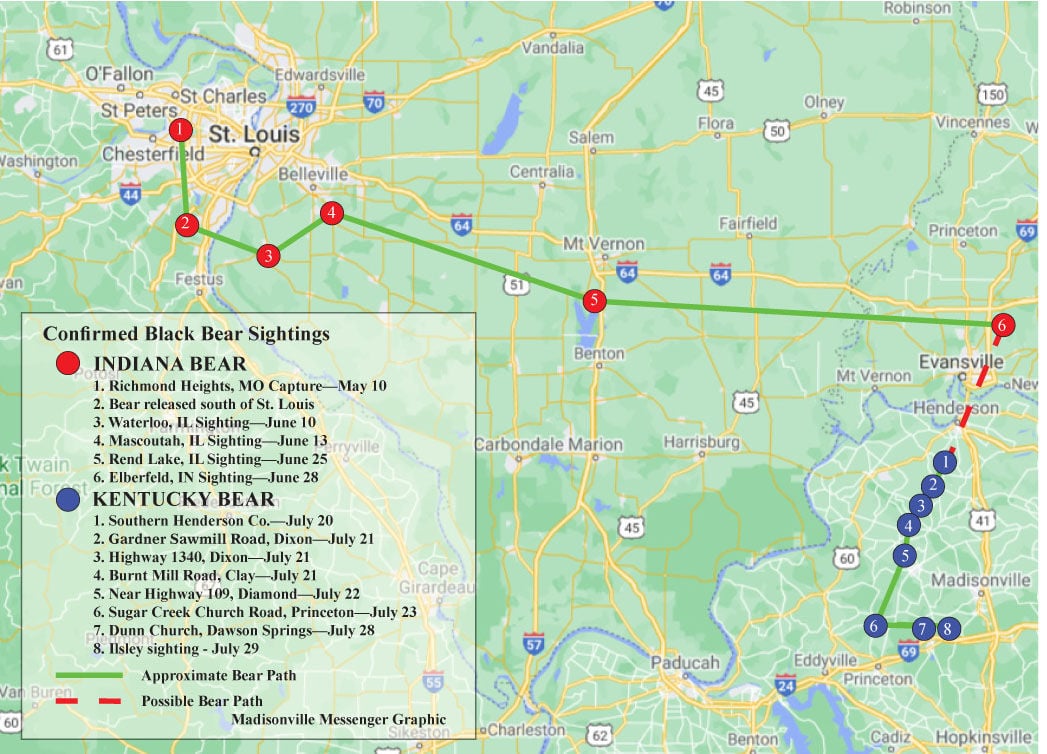 This black bear has made its way to Hopkins County after being spotted in Henderson, Webster and Caldwell counties in the past week.

A black bear that was first confirmed last week in Henderson has now made its way south, through Webster County and Caldwell County into rural Hopkins County, following a reported sighting on Wednesday night in the Dunn Church area north of Dawson Springs and another on Thursday morning near Ilsley.

As the animal moves through the area, local residents have been left with several questions. Why was he here? Where did he come from? Where is he going?

Those questions may have some surprisingly simple answers.

Why was it here?

The two closest native bear populations to Hopkins County are in eastern and southeastern Kentucky, where there are around 1,000 resident animals, and a population of around 800 bears in the Ozark region of Missouri.

According to John Hast, the black bear coordinator for the Kentucky Department of Fish and Wildlife, such a long-distance journey as the one undertaken by our most recent visitor isn’t as uncommon as most people would think. It’s actually a natural part of a young male bear’s coming of age.

“Anyone who has seen him should consider themselves lucky,” said Hast. “Black bears don’t usually travel during the day.”

Each spring, he explained, when bears come out of hibernation, the mother kicks the young male cubs from the previous year out of their hunting group to make way for new cubs. No longer welcomed by the mother, and not yet attached to a mate, these young males set out on a journey of exploration.

“At that point, they generally pick a direction and start walking,” Hast said.

Generally, it’s a solo journey, meaning the odds of two or more bears being in the same vicinity is quite rare, which means most of the unconfirmed bear sightings around the area don’t match with the path identified by KDFW and are most likely false reports.

Where did it come from?

While authorities tag most bears to help track the populations and keep up with migration patterns, the 1-year-olds have generally not yet been tagged, which does make it a little more difficult to know where they are and where they’ve been. But the daytime movement patterns of west Kentucky’s recent guest made making an educated guess surprisingly easy.

While most bears that wander into western Kentucky come from the eastern Kentucky population, this animal may have come just a little bit further.

Authorities first confirmed a sighting of a lone black bear in Brentwood, Missouri on May 10. It was then seen in the communities of Clayton and Richmond Heights. It was in the latter location that firefighters cornered the bear in a tree and tranquilized it. They then transported it to an undisclosed location south of St. Louis and released it into the forest.

A month later, on June 10, Illinois Department of Natural Resources confirmed the presence of a black bear near the city of Waterloo, Illinois, almost directly across the Mississippi River from the area where the bear from Richmond Heights was released.

During the next month, state and local officials tracked the bear through the Illinois communities of Mascoutah, Dubois and finally Rend City, near the Rend Lake spillway on June 19.

The bear was then sighted and confirmed by the Indiana Department of Natural Resources near Elberfeld, Indiana — just north of Evansville on June 28.

According to Hast, KDFW first confirmed the presence of the bear in Kentucky on July 20 based on a set of muddy tracks left in a driveway in southern Henderson County, north of Tilden.

“I’m still on the fence about whether or not this bear is the Indiana bear,” Hast said. “But the longer it goes without any new confirmed sightings out of Indiana, the more it looks like this could be the same one.”

“First thing this morning, we got calls about a bear being sighted on Gardner Sawmill Road in Dixon, behind Townsend’s grocery,” Sheriff Donald Jones said on Wednesday. “Next, it was on Highway 1340. Last it was seen on Burnt Mill Road.”

On Thursday, reports of the bear began coming in from Diamond, near the Tyson chicken houses. But soon after being seen, the animal vanished into the forest. There were no further confirmed sightings of the animal in Webster County.

By late Friday, authorities in Caldwell County had confirmed reports of a black bear in their county. By Wednesday of this week, residents in the southwest corner of Hopkins County were reporting sightings, and by Thursday it was sighted near Ilsley.

Where is it going?

The most likely answer is the bear is now headed back home to Missouri.

“They may wander all summer, but sooner or later these bears will head home,” said Hast. “Even if they find an agreeable environment and food, there is one thing they aren’t going to find — a girlfriend.”

If the bear really did originate from the Ozark bear population of Missouri, his round trip expedition would be somewhere in the neighborhood of 600 to 700 miles. That is a bit extreme, even for a young wandering bear.

Typically black bears will roam only a few hundred miles, although some have made longer trips. In 2020, Missouri wildlife believe a black bear, named “Bruno” by the media, made a 400-mile trek from northern Wisconsin, through Illinois and Iowa, before arriving in the Show-Me State.

“It’s hard to say what these roaming bears will do or which direction they are headed,” Hast said. “He could keep going to Missouri or he could double back towards eastern Kentucky. We had one last year that spent the winter south of Louisville. Then he showed up and got clipped by a car in April.”

Hast said despite an abundance of sightings, actually being able to locate a bear is far more difficult than people think.

“They are almost impossible to catch,” he said. “When they can move 20 to 30 miles through the wilderness in a day, somewhat in a random direction, they are hard to predict. I’ve caught over 500 bears during my career, and not one of them has been a roaming bear.”

He said tranquilizing a bear is also very dangerous.

“Bruno was a little different story,” he said. “He spent the summer in open farmland in central Illinois. Cars would line up for miles to get a look at him. He developed quite the following on social media. Then he found his way into the St. Louis area and got himself boxed into an area he wasn’t going to be able to get out of. Fish and Wildlife had to move him for his own safety.”

“Part of me is very glad that we had this bear down in your area,” Hast said. “We do a lot of black bear education, but not for places like Webster County. Most of what we focus on is places in central Kentucky where they’re starting to have roaming black bears on a regular basis. They’ve really helped us educate the public more than anything.”

Hast said as bear populations continue to grow and their territories expand, black bears are being seen more and more frequently in those central Kentucky counties and beyond. And, he said, those populations are exploding — going from just a few bears in the Smoky Mountains of Tennessee and the Blue Ridge Mountains in Virginia a few decades ago, to nearly 1,000 in Kentucky alone today.

Hast said he hopes locals will take this as a learning experience in case other bears come through the area again.

“We haven’t had a single problem out of any of the bears that roam into central Kentucky,” he said. “They don’t mess with livestock, and I can count all of the garbage cans they’ve gotten into on one hand.”

He said nobody really knows why or where these bears are going, they’re just going. Along the way, they don’t bother people or animals — and for the most part, they prefer not to be seen at all. If residents will secure their garbage and any outdoor animal food, they will likely continue on their way without causing any problem.

Wisconsin vs. Notre Dame football: 3 keys to victory, why the Badgers' running game matters so much and a prediction

Another California school district mandates vaccines for kids 12 and up. Will the whole state follow suit?