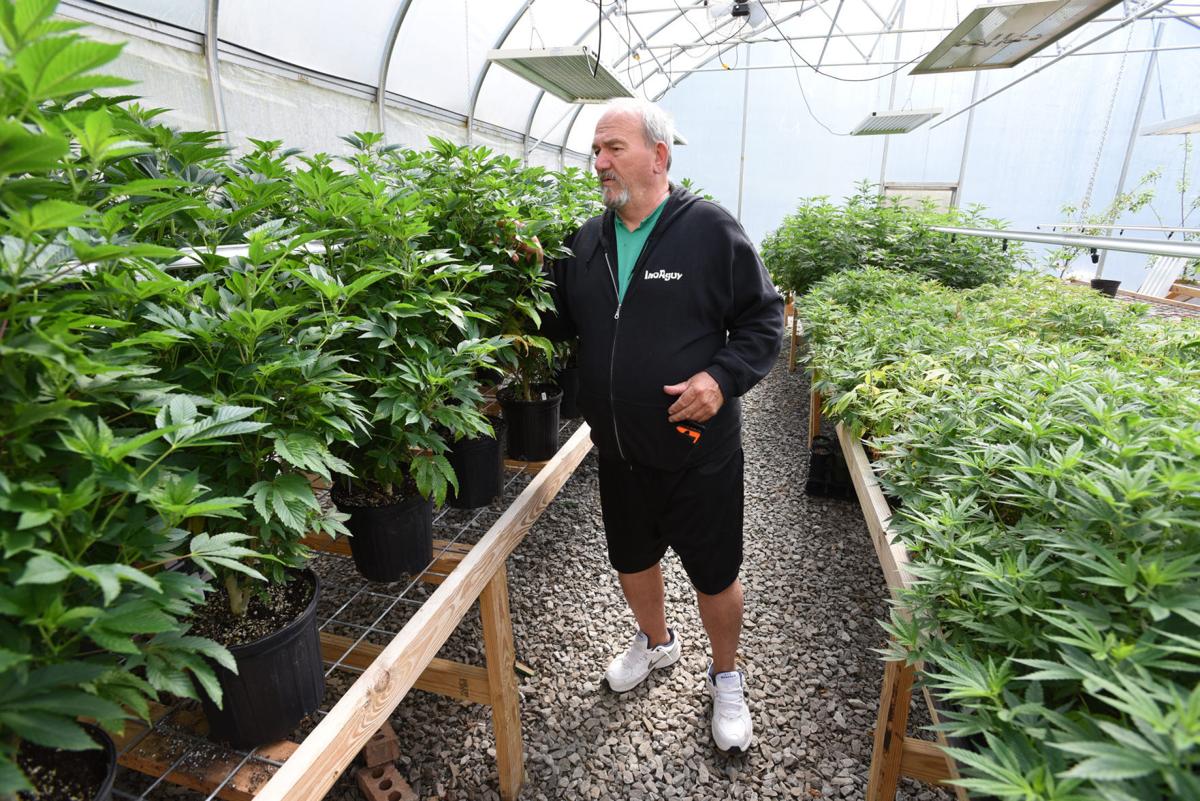 Paul Glover looks over his hemp plants in the greenhouse on Wednesday at his Mile Marker 5 CBD farm in Hawesville. 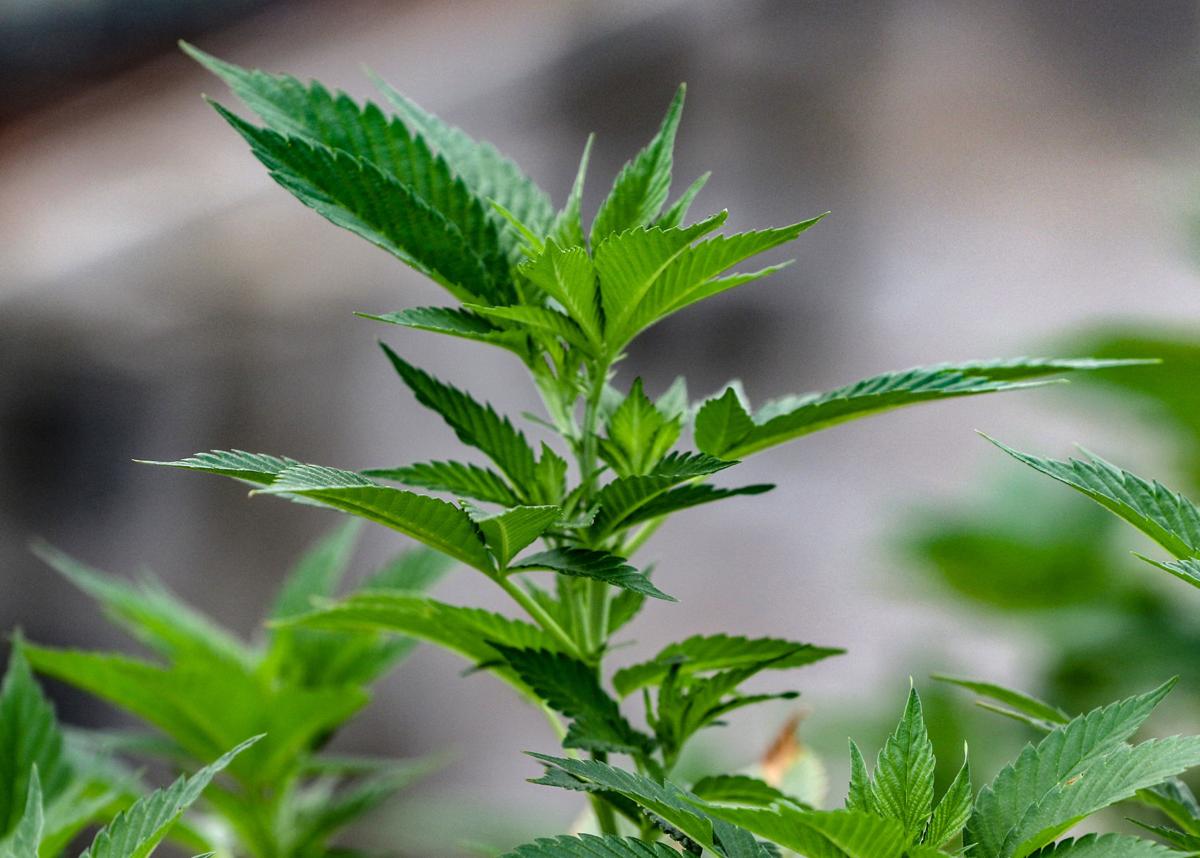 A hemp plant grows in a greenhouse operation run by Fuller Farms on Wednesday in Beaver Dam. 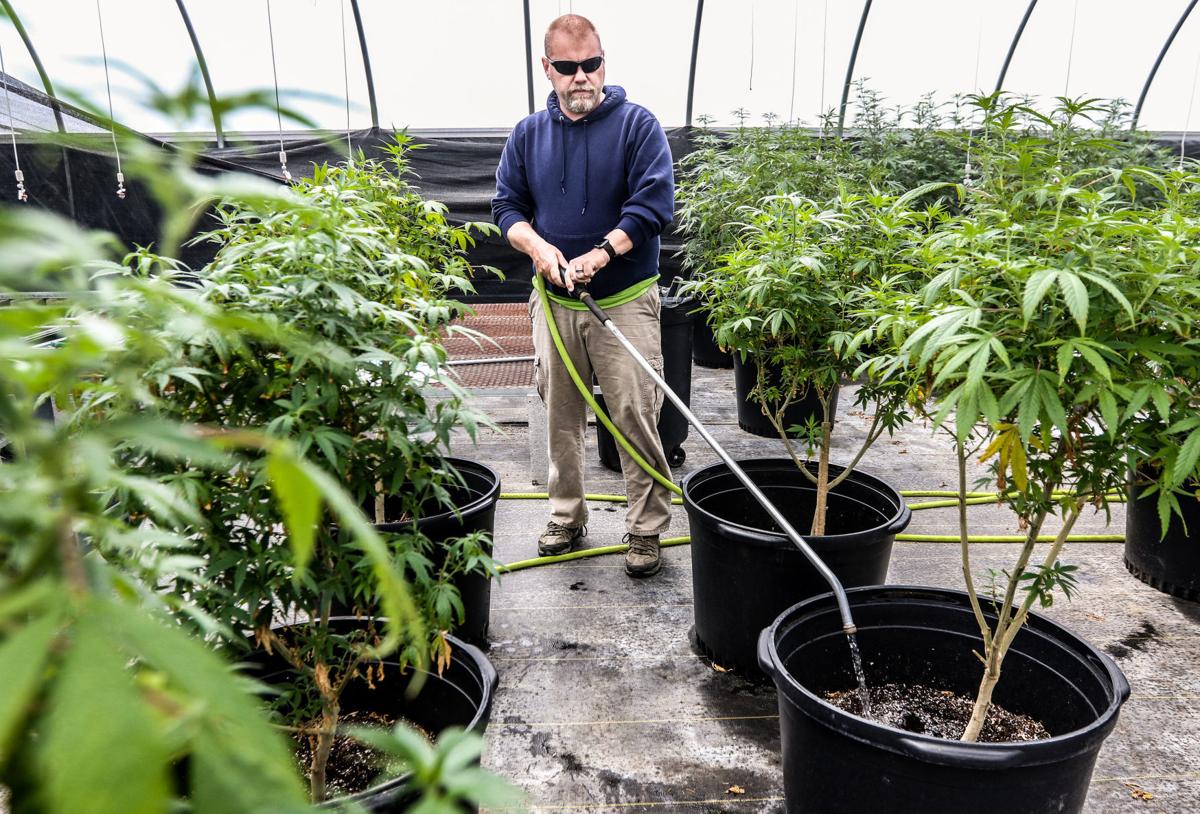 Jeff England, farm manager at Fuller Farms, waters rows of potted hemp plants in a greenhouse at the farm in Beaver Dam on Wednesday. 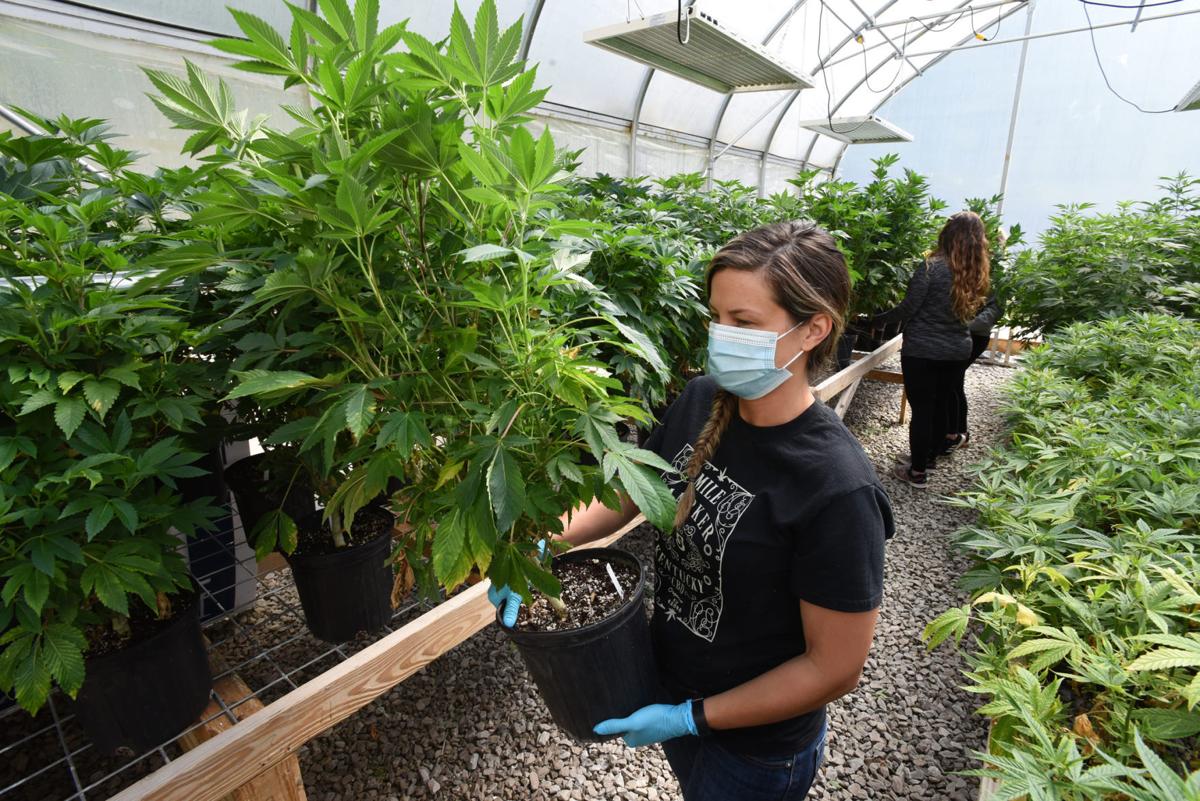 Paul Glover looks over his hemp plants in the greenhouse on Wednesday at his Mile Marker 5 CBD farm in Hawesville.

A hemp plant grows in a greenhouse operation run by Fuller Farms on Wednesday in Beaver Dam.

Jeff England, farm manager at Fuller Farms, waters rows of potted hemp plants in a greenhouse at the farm in Beaver Dam on Wednesday.

Industrial hemp’s first federally legalized year was a wild one, especially in Kentucky.

By March 15, the 2020 hemp license deadline, Kentucky farmers were still sitting on tens of thousands of pounds of hemp biomass that they couldn’t give away.

Few got paid, farmers are in debt, the once-coveted cannabidiol (CBD) market remains a glut and the promise of a new and bold crop for seasoned farmers and green-gold rushers, like their processor contracts, remains unfulfilled. In short, hemp farmers paid a lofty price for an education in 2020 and many lessons were learned.

But there are still those throughout Kentucky that are cautiously doubling down and pushing forward in contradiction of their own advice to “stay out of hemp.”

Beaver Dam pharmacist-farmer John Fuller, who was one of many farmers left unpaid in the Bluegrass BioExtracts saga, is growing 4 acres this year as opposed to the 18 acres he raised last year.

While Fuller knows better than to expect a payday from hemp anytime soon, this year’s focus will entail testing different plant genetics, experimenting with “indoor grows” and supplementing his one hemp-centric operation with growing produce.

“The way hemp is now, testing genetics sounds stupid,” Fuller said. “We are going to do 12 different varieties and do boutique hemp indoor for smokeable hemp and be able to grow medical marijuana so we can have a good product if Kentucky ever makes either legal. Aside from that, we are going to do nine acres of produce this year and do pumpkins, watermelon, cantaloupe, tomatoes, sweet corn, beans, onions — really anything you need for a good garden. We have the equipment and we can work the ground. We will do a stand outside of my pharmacy and the farm to see if we can make some money.”

In 2019, under contract with BBE, Fuller put roughly $800,000 into buying his farm and preparing it for hemp production through the addition of equipment, a two-acre irrigation pond, a dry-barn and retrofitting existing structures.

This year, Fuller has roughly $25,000 in his hemp product and is putting his major focus, given systemic issues with wayward processors, into creating a vertically integrated system where he controls and does all of the steps — from growing hemp to processing oil under his own roof. It’s one of many lessons he learned in year one of hemp.

“We got into this because we saw the benefits from our customers at the pharmacy,” he said. “Don’t trust any processor, that’s lesson one and don’t do any part of hemp unless you can go from seed to shelf or clone to bottle. Create your own supply chain and mainly, don’t grow hemp. If you didn’t learn your lesson you are an idiot — maybe I am. I have a small plan and hopefully, it will develop into a business. Don’t go in half-cocked, do it yourself and rely on no one. If you haven’t done it and are considering, stop. Don’t grow.”

Paul Glover, owner of Hawesville-based Mile Marker 5 CBD, is a seasoned hemp veteran and has been involved in the industry since the passage of the 2014 Farm Bill. Glover, even with his fully vertically integrated operation, is only growing two acres in 2020. His warning, as he has learned in years in the trenches, is to let the market settle and avoid the “Flim-Flam Man.”

“If you aren’t doing it, leave it alone,” Glover said. “The market will have to work itself out and farmers and new growers alike are being inundated with the rhetoric of the Flim-Flam Man. There is always someone out there trying to con you. There are a lot of processors here and in other states that promised the moon, sun and stars and didn’t deliver. What happened last year doesn’t need to happen again. There are people out there that strictly want to rip off the American farmer because they have a new line of (BS).”

Glover’s operation is set up to one day be able to support a medical marijuana grow, which won’t happen soon, he said. But in the meantime, to supplement 2020’s crop and try to recoup last year’s losses, he is jumping into cut-flower products and focusing on consumable hemp and ensuring that the allowable THC in hemp be bumped up to 1%, he said.

“I won’t even touch the topic of medical marijuana in this state,” he said. “It’s like “Cool Hand Luke,” in Frankfort — we have a failure to communicate with our politicians and we are in the Bible Belt. They won’t change their minds. For hemp, we need that 1% solution to give farmers more leeway and to open the markets up and make it safe for manufacturers. I can see the consumable issue being brought to Frankfort as more farmers move to get rid of legislation and politicians that are not acting in our best interest. They don’t think about the farmer or the people positively affected by the hemp industry. I’m going to work as I always have to maintain my farming lifestyle and take care of my employees, thus me growing flowers.”

Philpot-based farmer Curtis Berry, who brought hemp into the fold of his tobacco, row crop and cattle operation last year, has the infrastructure to grow hemp again in 2020, but hasn’t made up his mind, he said.

For the past 25 years, he and his family have been, aside from fulfilling their own 32,000-pound dark air-cured tobacco contract, providing young greenhouse-grown tobacco plants to other farmers to the tune of roughly 550,000 each season. In 2019, Berry sold roughly 600,000 tobacco plants and 80,000 hemp clones. Going into 2020, his tobacco has been cut by 48% and his hemp has dropped 90%, on top of the market uncertainty for his other commodity goods due to COVID-19.

“The family was here doing it and we are doing our thing and waiting to see what happens,” he said. “For what we got paid for last year with clones, we did well. I don’t know what I’m going to do. I’m set up to do it if I want. If I change my mind, I don’t have to. The battle we are in this year is just getting paid for what we grew last year.”

Berry is still sitting on 4,500 pounds after finding himself, like most hemp farmers, trying to get processor Virginia-based Clinch River Hemp Company to honor his contract. For Berry, it was the “crooks” that put a stain on what could have been a great crop for Kentucky.

“It is sad, it was a good opportunity for another crop here in Kentucky and we had enough crooks that it has kind of went to pot,” he said. “Right now, if you aren’t in it, staying out is a wise choice. We have the money invested in last year, so why not do it again.

“We have a greenhouse full that we’ll plant, sell or just throw away. What’s the point of growing a crop without a market? It could have been a better crop, but there were too many crooks or people trying to make a quick buck to support a new crop.”

Student breaks down after learning classmate died in shooting

You can rent the 'Home Alone' house. Take a peek inside

See how heroin user tests drug for the presence of Fentanyl