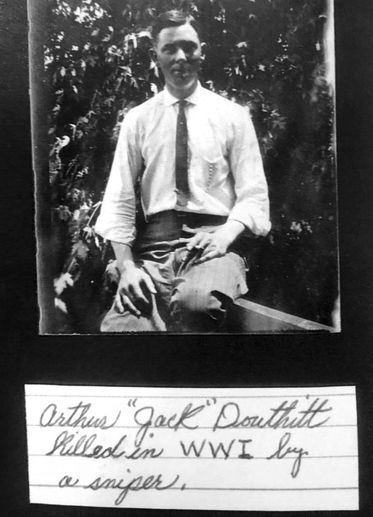 U.S. Army soldier Arthur J. Douthitt who was killed in France during World War I in 1918. 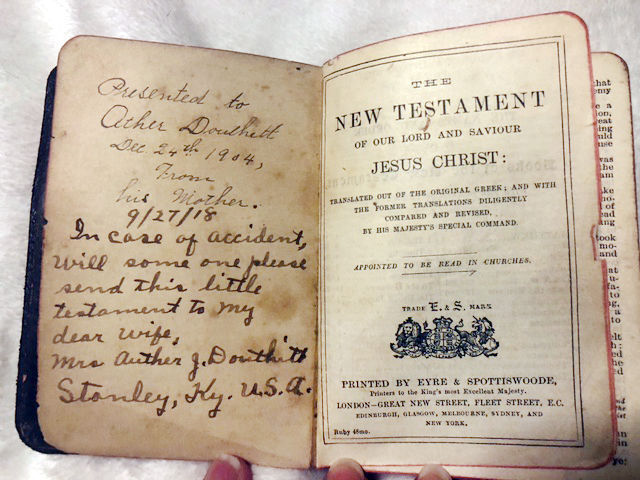 A New Testament that belonged to U.S. Army soldier and Kentucky native Arthur J. Douthitt who was killed in France during World War I in 1918. The family has just decided to donate the items to the National World War I Museum and Memorial in Kansas City, Missouri.

U.S. Army soldier Arthur J. Douthitt who was killed in France during World War I in 1918.

A New Testament that belonged to U.S. Army soldier and Kentucky native Arthur J. Douthitt who was killed in France during World War I in 1918. The family has just decided to donate the items to the National World War I Museum and Memorial in Kansas City, Missouri.

Nearly 100 years have passed since a New Testament carried by Arthur J. Douthitt into battle during World War I made its way back to his widow in Kentucky from France. Now, it will be donated to the National World War I Museum and Memorial in Kansas City, Missouri.

Nicole Morton Goeser said she wants to share the story of her great uncle, a native of Stanley, with his own community.

While Douthitt was killed in action, reportedly by an enemy sniper while serving with the U.S. Army in France, his New Testament, kept safe in a red Velvet tobacco tin, was recovered from the battlefield. In February 1923, his widow Lillian Douthitt received an unexpected letter from a Mr. Fred Robak of Birmingham, England.

“In going through my brother-in-law’s effects a few days ago, I found amongst them a testament and inside the cover is a note asking in case of accident for someone to return it to you,” the letter read.

On the inside cover of the New Testament given to him by his mother in 1904, Douthitt had written, “In case of accident, will someone please send this little testament to my dear wife, Mrs. Arthur J. Douthitt, Stanley, KY, USA.”

Considering that five years had passed since the close of WWI in 1918, Robak wanted to make sure he had the proper address before sending the tin and New Testament back to Kentucky.

“I just know that letter was sent to Great Aunt Lillian first because the gentlemen had her husband’s testament and he wanted to make sure that he had the correct address first,” Goeser said.

After the death of Lillian Douthitt in 1966 and her daughter, Hazel, in 1978, a daughter her father was never able to meet, the tin and New Testament passed to Goeser’s mother, Elizabeth, before being given to her.

It has been a treasured family keepsake, one that has helped keep the memory of Douthitt alive and well through the decades.

“(Douthitt) sent Lillian a letter with 50 cents to pay someone that he owed,” Goeser said. “Can you imagine, this poor guy is in the middle of fighting a major world war and he is such a good guy that he sends money home to pay off his debt.”

Lillian Douthitt never remarried and was buried near her husband in Owensboro’s Rosehill Cemetery.

Goeser said that she wanted to ensure the New Testament would not be lost over time, and with it the story of her aunt and uncle, so she decided to donate the items to a national museum. After speaking with the curator of the National World War I Museum and Memorial, it was decided that the museum was the best place for the tin and book.

“I think my mom is really happy that it is going to go someplace where it will be properly preserved and appreciated,” she said. “We don’t want it to get lost. I felt like it was important to share the story locally.”

Vaccine-hesitant patient: If I could do it all over again, I'd get it