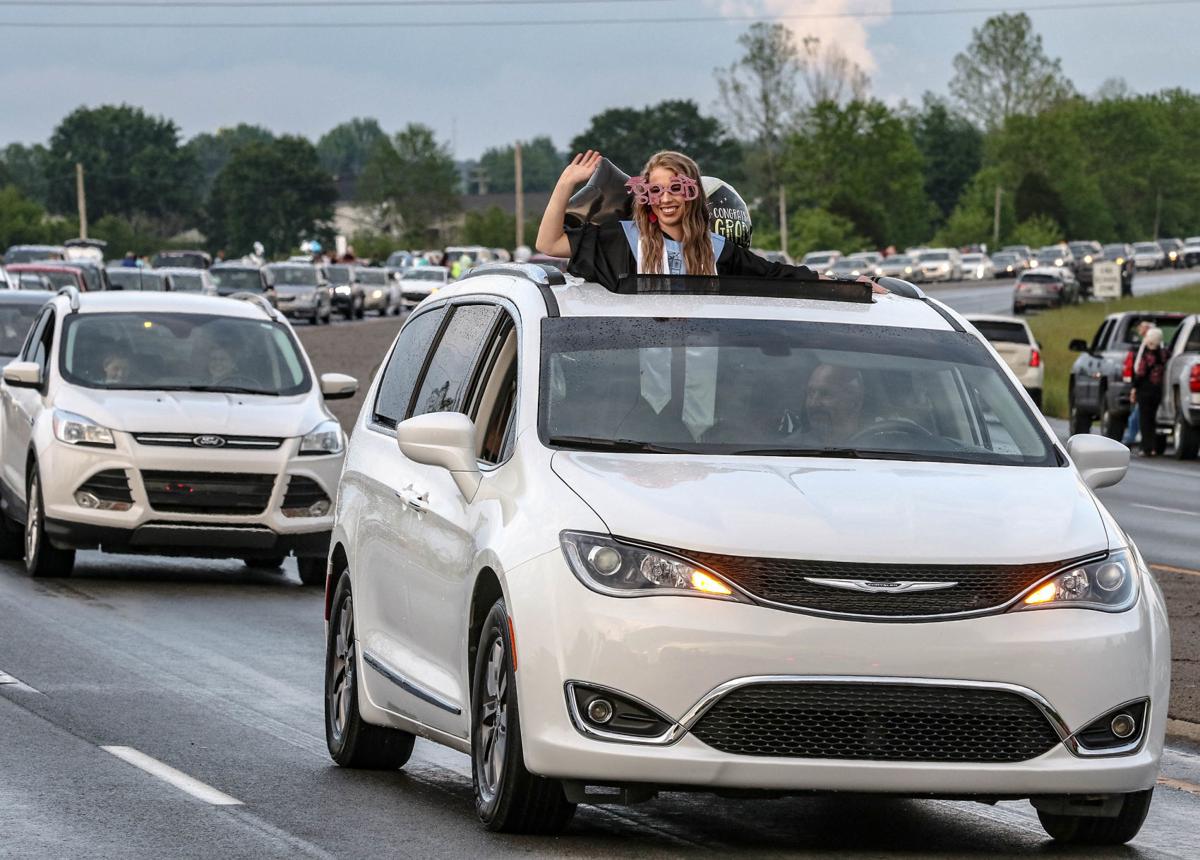 Muhlenberg County High School graduate Lindey Lipe waves from the sunroof of a van to crowds gathered along Robert L. Draper Way as she and fellow graduates paraded along the highway toward the parking lot of the school to receive their diplomas.

Family members of Muhlenberg County graduate Camden Lile wave from the shoulder of Robert L. Draper Way as he parades with other graduates toward the high school Friday to receive his diploma.

Muhlenberg County High School graduate Lindey Lipe waves from the sunroof of a van to crowds gathered along Robert L. Draper Way as she and fellow graduates paraded along the highway toward the parking lot of the school to receive their diplomas.

Family members of Muhlenberg County graduate Camden Lile wave from the shoulder of Robert L. Draper Way as he parades with other graduates toward the high school Friday to receive his diploma.

Like schools nationwide, the notion of a “traditional” commencement ceremony became a non-option due to COVID-19.

“We took a little from everybody,” he said. “I have to give all of the credit to the high school principal Donna Bumps. We all got together and nailed down the logistics and coordinated with law enforcement and the health department to to design a safe and memorable way to do it. She came up with the idea and made it all come together.”

The bypass and route leading from the Muhlenberg County Agriculture Center to the Muhlenberg High Schools West Campus was lined with posters, and decorated cars honoring seniors as the procession of this year’s grads made their way to campus to receive their diplomas drive-thru style.

What was unique about the high school’s ceremony is that it still afforded the opportunity for Bumps as well as co-valedictorians Lauren Ford and Madeline Drake to give their respective speeches, making the ceremony as close to the norm as possible, said Bumps.

“We definitely put our spin on it to make it unique for us and keep it as traditional as possible,” she said. “What I haven’t seen other schools do is have the invocation, the pledge, the speeches; we are having all of that in place.”

Students drove up to the stage, and as their names were called, they left their respective automobiles, accepted their diploma, walked the stage and made way for the next in a procession honoring roughly 280 grads.

For Ford, these are certainly interesting times, but she couldn’t have imagined doing it with anyone other than her fellow Mustangs.

“It is interesting,” she said. “It is sad that we are losing part of our senior year, but it is cool to know that there won’t be a class like this again. I feel like my class is a very creative and intelligent group and we have built a community that many peers aren’t lucky enough to have with their peers. People are reaching out and interacting more than they would during normal circumstances. It is bitter sweet but the school has done a great job in making us feel special.”

For Drake, as she said in her speech, what they have gone through together has given them all a strength they will carry with them into the future.

“Of course I would rather be closer to my friends and have more of a traditional ceremony,” she said. “That being said, we are having much more of a traditional ceremony than other schools as far as speeches and getting our diplomas. We can handle anything if we can adapt and change as easily as we did with all of this. We can carry that into the rest of our lives and it will only make us stronger. “