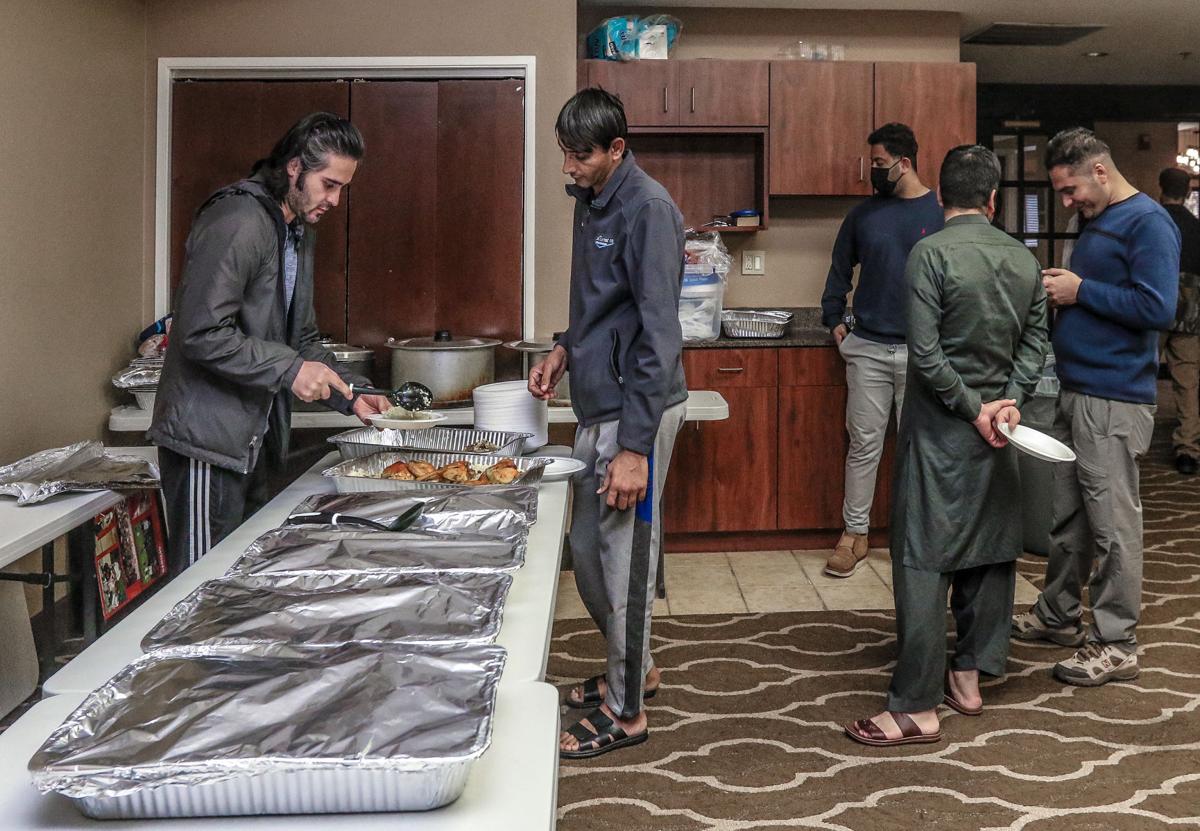 Above: Edris Akbari, left, serves a chicken and rice meal for lunch in a conference room on Friday to fellow Afghanistan refugees who are currently occupying rooms at the Comfort Suites in Owensboro. The meal was provided by Jasmine International Store in Bowling Green. Left: Afghanistan refugee Gulamin Khar enjoys a meal in the cafeteria area of the Comfort Suites on Friday. 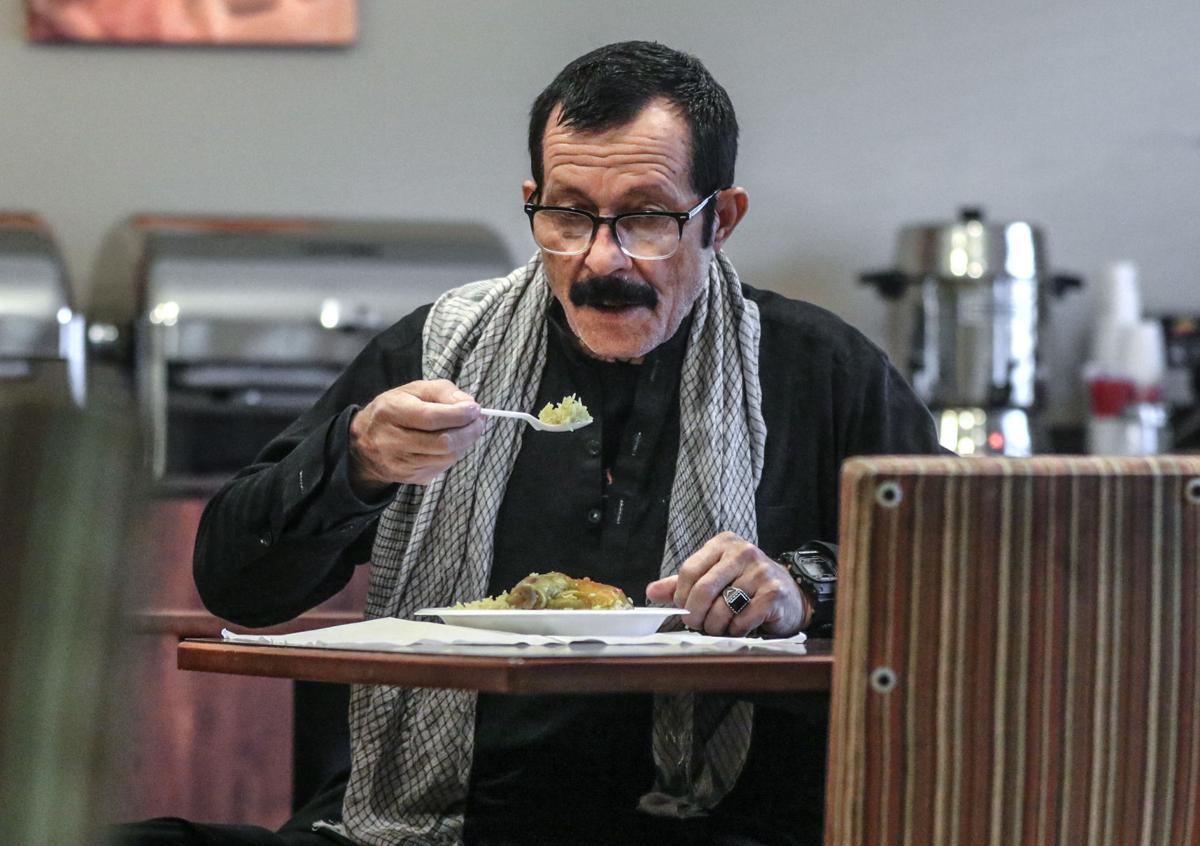 Afghanistan refugee Gulamin Khar enjoys a meal in the cafeteria area of the Comfort Suites on Friday.

Above: Edris Akbari, left, serves a chicken and rice meal for lunch in a conference room on Friday to fellow Afghanistan refugees who are currently occupying rooms at the Comfort Suites in Owensboro. The meal was provided by Jasmine International Store in Bowling Green. Left: Afghanistan refugee Gulamin Khar enjoys a meal in the cafeteria area of the Comfort Suites on Friday.

Afghanistan refugee Gulamin Khar enjoys a meal in the cafeteria area of the Comfort Suites on Friday.

Although the resettling process of Afghan refugees into long-term housing in Owensboro has been challenging, it has been one that the International Center is determined to see through and do right, according to volunteer housing coordinator Diane Ford.

Ford said she began working with the International center in September, just before refugees arrived in October.

Originally, she was just assisting with donations, but ended up working to help secure housing as the refugees arrive.

She said it was a feat the center originally thought it was prepared for as it expected to receive around 100 refugees.

The center received nearly double its original expectations, however.

“The weeks leading up to their arrival, we really thought we were going to … place everyone into housing,” she said.

One of the first families that arrived, she said, however, was a family of nine.

With a shortage of quality, affordable housing in general, along with some hesitancy from local landlords, finding a home for nine people, she said, was concerning.

That particular family, she said, ended up being housed in a log cabin outside city limits.

“My husband ended up … having to climb a ladder into the second-floor window and go through, in a suit and tie, to get that house set up and moved them in because we didn’t have the right key to the front door,” she said. “At that time, I thought, ‘OK, we’ve got them here and as they arrive, I’m going to find places like this; it will all work out,’ and then they began arriving like 25 or 30 a day.”

As more refugees began arriving in larger quantities, Ford said it became much more difficult to get them placed and there was some pushback from local landlords that did not feel comfortable renting to individuals who did not have a credit history in the United States, a Social Security card, or a steady job.

Even with housing, she said there were other roadblocks, as well.

At that point, Ford said, the center decided placing refugees in a hotel might be the best option and eventually were able to work with Comfort Suites in Owensboro.

However, the hotel, at the time, and many others nearby, were full with guests in town for a big event, so the first hotel guests had to stay in Henderson before finally being transported back to Owensboro once rooms became available.

At one point, Ford said there were 170 refugees in the Comfort Suites hotel. That number has since dwindled as more housing opportunities have become available.

Although the hotel stays have been challenging in their own right, as well as costly, Ford said it has also been a blessing in disguise.

“The silver lining — the biggest one, in my opinion, is the sense of community we have created. They really have bonded with each other, created really deep and meaningful friendships and I know I have with every single one of them,” she said. “Even the staff there, we’re like one big family, and I don’t think we would have had that with them, and they certainly wouldn’t have created that with each other so quickly if they hadn’t all been placed in one hotel.”

Creating those connections, she said, will help solidify a more successful integration into the community long-term for refugees.

Housing in hotels, she said, have been largely possible with donations from local churches.

Ford said the International Center is slowly, but surely, working to get the refugees out of the hotel and into more long-term housing, however.

In recent weeks, she said the process has moved more quickly than it has in the past three plus months, partially thanks to some persistence with local renters.

But they were also discovering other obstacles such as a high-rent market locally and across the country.

“There’s just a lack of affordable, quality housing, I think, and it’s not just in Owensboro; it’s a nationwide affordable housing crisis,” she said. “COVID did not help that at all with delays in building materials, so even if there were developers who were planning to build more affordable housing, all of that has been stalled and delayed because of COVID.”

The 'toxicity' and 'loneliness' of #workingwhileBlack

Next winter storm could be a 'huge snowstorm for New England'

And to add to that challenge, she said, the center did not gradually receive them, Afghan refugees came quickly and without much notice to all involved.

“It was an emergency evacuation of 160,000 plus people that never expected to leave their country, where normally, a refugee is applying to leave their country and it’s a multi-year process,” she said. “For them, it was a last-minute, split-second decision, something that they didn’t plan to do, but something that they were forced to do, and most cases, to save their lives and the lives of their families, so this is different.”

Ford said many refugees have large families they are bringing with them, making housing an even greater challenge.

For many renters, she said, there have been misconceptions about certain regulations when it comes to housing.

“They have every right to have concerns; that’s their business, they want to be in compliance and follow regulations,” she said.

However, she said there was one particular concern that was regularly brought up, regarding whether or not renters were allowed to rent to families that would require more than two individuals to be housed per room, which Ford said is no regulation unless a unit is deemed Section 8 or subsidized housing.

Ford said the International Center sought out legal advice regarding housing regulations and board member Susan Montalvo-Gesser was able to draft out a letter for local landlords to plead with them to make exceptions as far as background checks, citing the rigorous vetting refugees have undergone during their stay on military bases prior to their arrival.

Additionally, the letter states, background checks and Social Security numbers are not legally required for tenancy.

“These may be internal policies of a company which are created, in theory, to protect the investment of a property owner, but are not legal requirements. Where other means are available to reduce risk to the landowner, such as alternatives to background checks; these other means should be used to reduce the chance of FHA discrimination and uphold the law,” the letter stated. “The Afghans, however, have had more extensive background checks than those that could be provided by the standard background checks done by Kentucky landlords.”

Background checks, she stated, have been performed on behalf of Afghan refugees by the Departments of Homeland Security and Defense, as well as the Federal Bureau of Investigation (FBI), National Counterterrorism Center (NCTC), and additional Intelligence Community (IC) partners.

Since sending out the letter, Ford said there has been a slight shift and refugees have been getting moved into long-term housing more quickly in the past several weeks.

Ford said the International Center is also setting refugees up with a network of support, and many renters have been provided with three months of rent payment up front from refugees’ resettlement funds.

There are also funds set up to pay the remainder of a lease, she said, if, for some reason, someone needs to break their lease, whether they need to relocate to be with family members, or some other reason.

However, it is a fairly unusual circumstance when that happens, she said.

“The statistics for refugees are really impressive. Ninety-eight% of them are off of all assistance within six months and they have jobs and it is very rare that anybody defaults on their lease or breaks their lease,” she said. “What we’re saying is, make an exception for these people that sacrificed so much to help our governments, our military, otherwise, they don’t have a chance.”

She said the needle has begun moving on getting refugees into housing and out of the hotel.

The next big challenge, Ford said, is employment. That, too, however, is beginning to come together.

“We really are trying to find them … employment that fit their skill-sets,” she said. “Most of them were leading very good lives there — professional lives, and so we’re trying to give them a sense of that here.”

Many Afghan refugees, she said, have bachelor’s and even master’s degrees, so the challenge there is just getting them set up with companies and jobs that fit their skills in the community.

Ford said there have already been job fairs hosted at the hotel, however, and many refugees have already received job offers.

While the process to get refugees settled is still ongoing, Ford said it is moving along and will continue to with community support.

Everyone involved in the settling process, she said, have been determined to get it right along the way and set refugees and families up with whatever they need, whether it be housing, shelter, employment, medical appointments, or anything else.

“They’re a different group of refugees, and therefore, the process has had to be altered and needs to be different to accommodate them and so we’ve had to take a unique approach to this resettlement, and I think we’ve done it. We’ve made some mistakes along the way … but we’ve learned,” she said. “We’re determined to get it right. They deserve for us to get it right.”

Scientist explains how they're creating a universal Covid vaccine