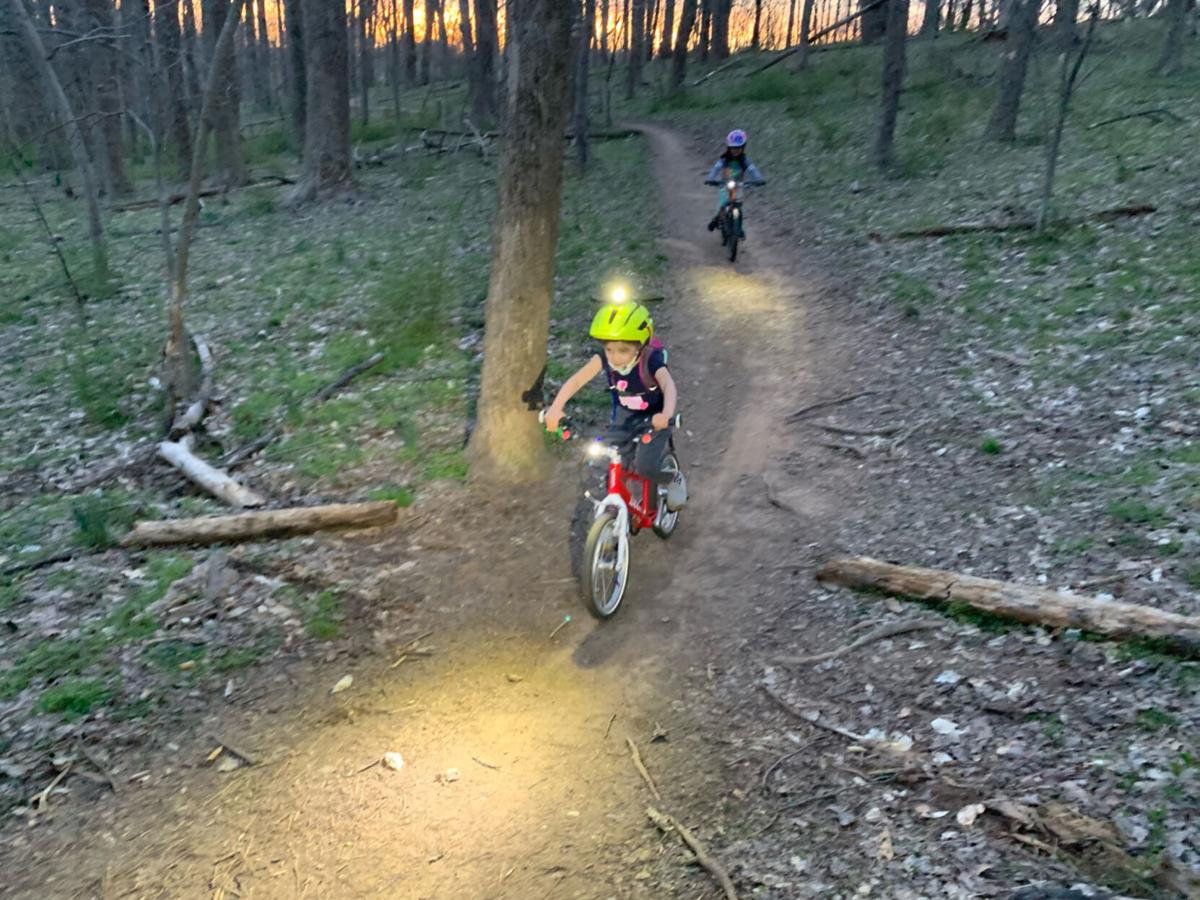 Ashby Truyens, 4, of North Bethesda, Md., goes on a family trail ride on March 21 with a local mountain-biking group, the Mid-Atlantic Off-Road Enthusiasts. 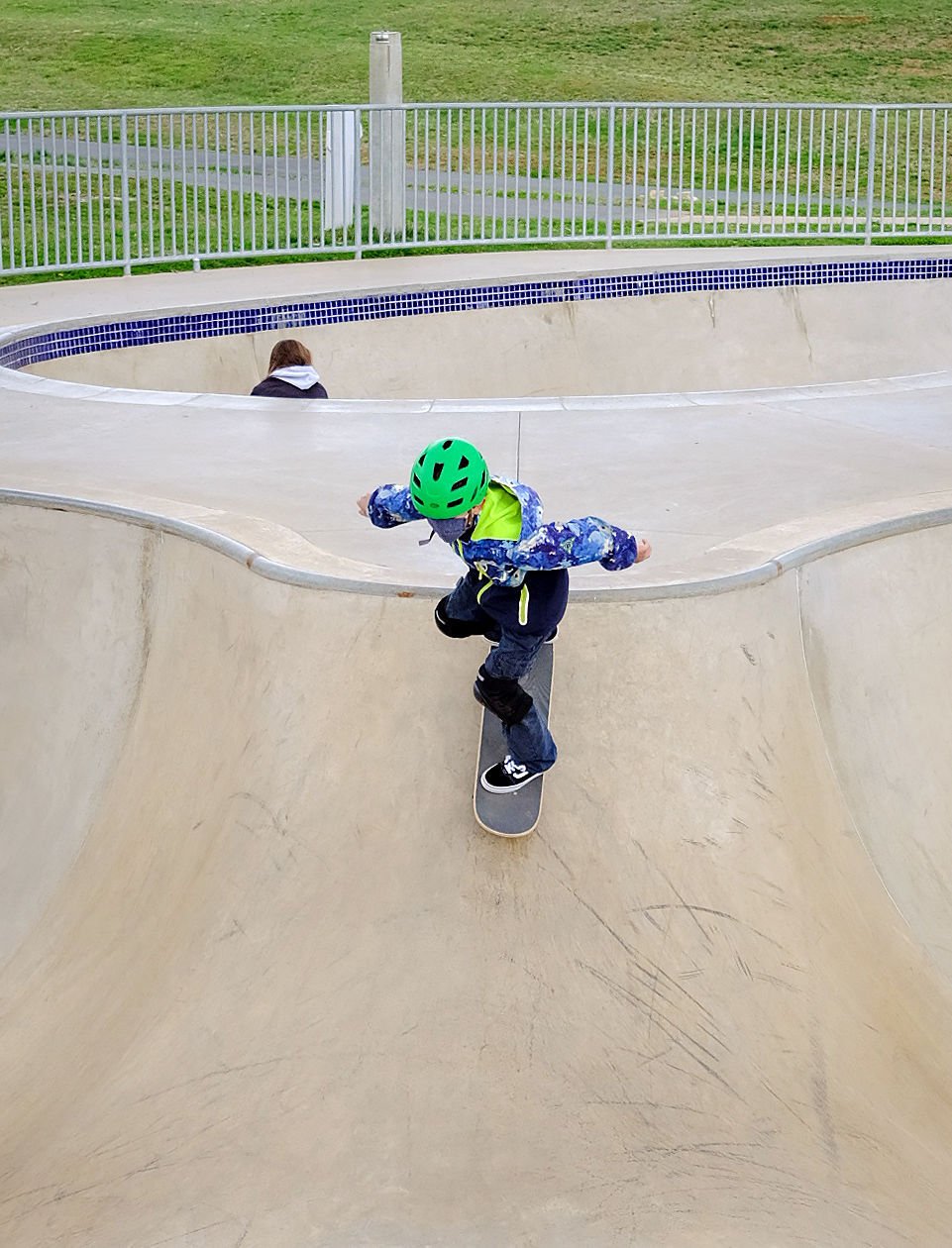 Ashby Truyens, 4, of North Bethesda, Md., goes on a family trail ride on March 21 with a local mountain-biking group, the Mid-Atlantic Off-Road Enthusiasts.

Michael Gilbert did not let his 9-year-old son, Caleb, join a basketball league last fall, even though some programs had started modified practice. “He really wanted to play, but my wife and I were nervous. Everything was inside a gym. It just didn’t seem safe,” said Gilbert, a law professor in Charlottesville, Va.

After some soul-searching, the family found an activity that felt less risky: skateboarding.

To Gilbert’s surprise, skateboarding ticked all the COVID-19-safety boxes that basketball could not. “It’s outdoors, in a nice big skate park, and there’s a natural distance that people want to keep from each other,” he said.

As for injury risk — skateboarding’s perennial hot-button issue — the Gilberts were less concerned, he said. They outfitted Caleb and his 13-year-old brother, Graham, with boards, helmets and lessons and called it a day.

With most kids’ team sports suspended or restricted because of concerns about COVID-19, parents have been reassessing which activities feel safe and which seem risky. It’s led to some unorthodox trade-offs, as people turn away from traditional team sports and start looking at alternative sports in a new light.

“Parents have only so much attention to give to risks, and it’s possible that the pandemic has absorbed all of that thinking,” says Matthias Doepke, an economics professor at Northwestern University who researches parental decision-making. “COVID-19 is a bigger and much more tangible risk, so we’ve become more relaxed about other smaller risks.”

Hoards of new skateboarders and cyclists may be a bright spot in the decades-long trend of declining physical activity rates among kids. Some wonder whether the shift will become part of a broader trend away from highly structured team sports and toward more free-range forms of physical activity.

“I’ve seen a lot of skeptical parents come around,” says Matt Moffett, manager of the Charlottesville Skate Park. A former professional skateboarder, Moffett gives private and group lessons. The pandemic brought a flood of new kids to the skate park, including the Gilbert boys, and demand for lessons more than doubled, he says. Based on his conversations with parents, “all these new faces were kids that normally do Little League, soccer or football,” he says.

By September, Moffett was teaching about 25 lessons per month. He took a hiatus in January and February but has been fully booked since resuming lessons in March. About 40% of his students are female. “We have 4-year-old girls in unicorn helmets riding next to fully tattooed guys,” he says, “and everyone tries to mentor each other.”

The collective easing of anxiety around skateboarding may be more in line with statistical realities, according to national data from the Consumer Product Safety Commission. Responding to growing parental concern about X Games sports, the agency in 2002 published a study comparing youth skateboarding injury rates with those of other sports. The findings showed that skateboarding was, statistically speaking, much safer than basketball: Skateboarders had an injury rate of 8.9 per 1,000 participants, while basketball players’ injury rate was 21.2 per 1,000 players. (Nevertheless, the American Academy of Pediatrics that year recommended against skateboards for children under 10 unless closely supervised by an adult, citing injury risk.)

“When you’re trying to convince parents, statistics are important, but they’re not enough,” says Mariana Brussoni, an associate professor of pediatrics at the University of British Columbia who specializes in injury research and prevention. For example, cars are one of the leading causes of death for children, she says, “yet parents think they’re keeping their kids safe by putting them in a car and driving them somewhere, rather than letting them bike.”

When supply at gas stations should return to normal

Parents’ focus on competitive team sports overlooks the importance of free play in cognitive development, Brussoni says. Unstructured physical activities — including skateboarding, bike riding and general outdoor play — allow kids to explore and develop skills in problem-solving and goal-setting, she says. Organized team sports, on the other hand, tend to be adult-led and highly supervised, with goals set by others, she says. “When someone is telling you what to do and how to do it, you’re not practicing using that part of your brain.”

Anna Inabinet’s 8-year-old daughter, Kilby, was a competitive swimmer until Chicago pools closed because of COVID-19. When Kilby asked for a skateboard, Inabinet, 43, was surprised and a little nervous: “It just seemed so outside her comfort zone,” she says. It has since become a favorite activity. Kilby rides at the Grant Skate Park several times a week. “We’ve been six times since Monday,” Inabinet said on a recent Thursday.

Though some pools have reopened for competition, Inabinet says she isn’t sure when Kilby will be returning to swim team. “I’ve seen videos: They’re indoors, without masks. It looks pretty crowded, and you know the kids are breathing hard,” she says. “Personally, swimming feels too dangerous. I’m much more comfortable with her skateboarding.”

It’s a refrain that Enrico Hufana, Kilby’s instructor, has heard repeatedly in the past six months.

“Parents don’t look at skateboarding as dangerous anymore, especially when there’s an instructor teaching their kids,” says Hufana, 38, founder of Little Ripper Skateboarding School. A real estate agent by day, he was teaching his 6-year-old son to skateboard at a local park last summer when another parent asked if he’d coach their kid, too. Pretty soon there were more requests than he could handle. Hufana now has six instructors working for him. Though some spring sports have resumed in the city, demand for lessons is still high. “A big component of skateboarding is as a creative outlet, and you may not get that with traditional sports,” he says.

This kind of break from team sports can be a chance for kids to explore creative and independent forms of play, Brussoni says. “As kids build up their skills over time, it also builds parents’ confidence in what their kids are capable of.”

Carley Truyens saw this firsthand. She introduced her kids Eli, 7, and Ashby, 4, to a local mountain-biking group last summer as a COVID-19-friendly alternative to team sports. Truyens originally thought Ashby might be too young to keep up on the weekly rides, but she’s watched her daughter’s confidence grow each week in the woods near their home in North Bethesda, Md. “Now she has a little crew of 5- and 6-year-old friends who ride bikes,” says Truyens, 38.

Truyens figured the evening rides, with the Montgomery County chapter of Mid-Atlantic Off-Road Enthusiasts organization, would stop once daylight saving time ended in November. “I’d never thought about mountain biking at night,” she said, never mind with children. But the group rode through the winter, weather permitting, so she and Ashby learned to gear up with headlamps, bike lights and reflective clothing. “She’s disappointed now that rides aren’t in the dark anymore,” Truyens says.

Katie Fates has a pretty strong caution meter, she says. The 44-year-old mother of four from Boxford, Mass., didn’t let her son Jack play football until high school, for example, because of concerns about head injuries.

When he started mountain biking last year at 17, she figured it would be a good father-son activity — especially because his lacrosse and football seasons were canceled. Jack and his dad, Matt, 47, built a ramp. Then another. They got better and more aggressive.

As his biking skills improved, Jack designed increasingly elaborate features for the backyard obstacle course, including multiple drops and jumps. “The engineer in his brain really came out, it was cool to watch,” says Fates.

Now, they charge downhill courses, and “one of them usually comes home a little bloody,” Fates says. All of that is fine. What makes her nervous is high school lacrosse season, which started in April.

“I’m so much more comfortable with him biking than going back to team practice,” Fates says. Because Jack’s rides either start from the house or from the car with his dad, she feels they still have some control. “You’re not relying on other people’s sensibilities like you are with a team,” she says. Knowing the kinds of bad decisions teens can make, “it’s nice to take that out of the equation.”

As the pandemic wears on, Mike Gilbert is finding his attitudes toward risk relaxing even further: One day in March, the boys came home exhausted, carrying bags of junk. They had been treasure hunting along the train tracks in their neighborhood — without permission, Gilbert adds. “I remember thinking, ‘If this weren’t a pandemic, would I be freaking out right now?” he recalls. “As it was, all I said was, ‘You were outside for an hour? Great!’ ”

Should Colonial Pipeline have paid the hackers?

Should Colonial Pipeline have paid the hackers?