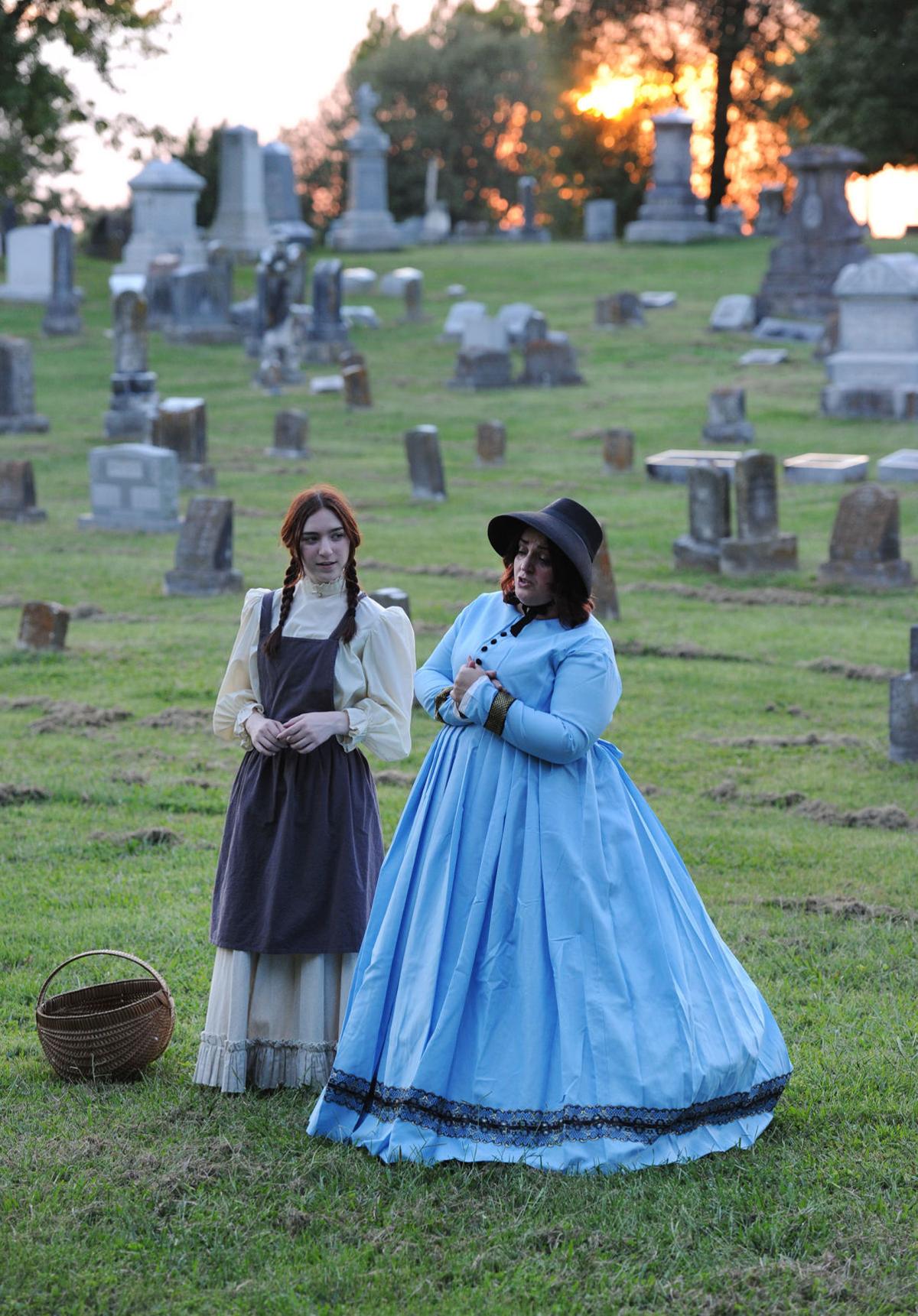 Ava Wiggins, left, playing daughter Margaret Turnbull, and Jennifer Wiggins, playing mother Rebecca Turnbull, tells the story of the Payne and Turnbull families’ feud in Daviess County in 1851 during a rehearsal of the 14th annual Voices of Elmwood at Elmwood Cemetery. Ava and Jennifer are real-life daughter and mother. Voices of Elmwood was founded by the Owensboro Museum of Science and History in collaboration with the Daviess County Public Library. 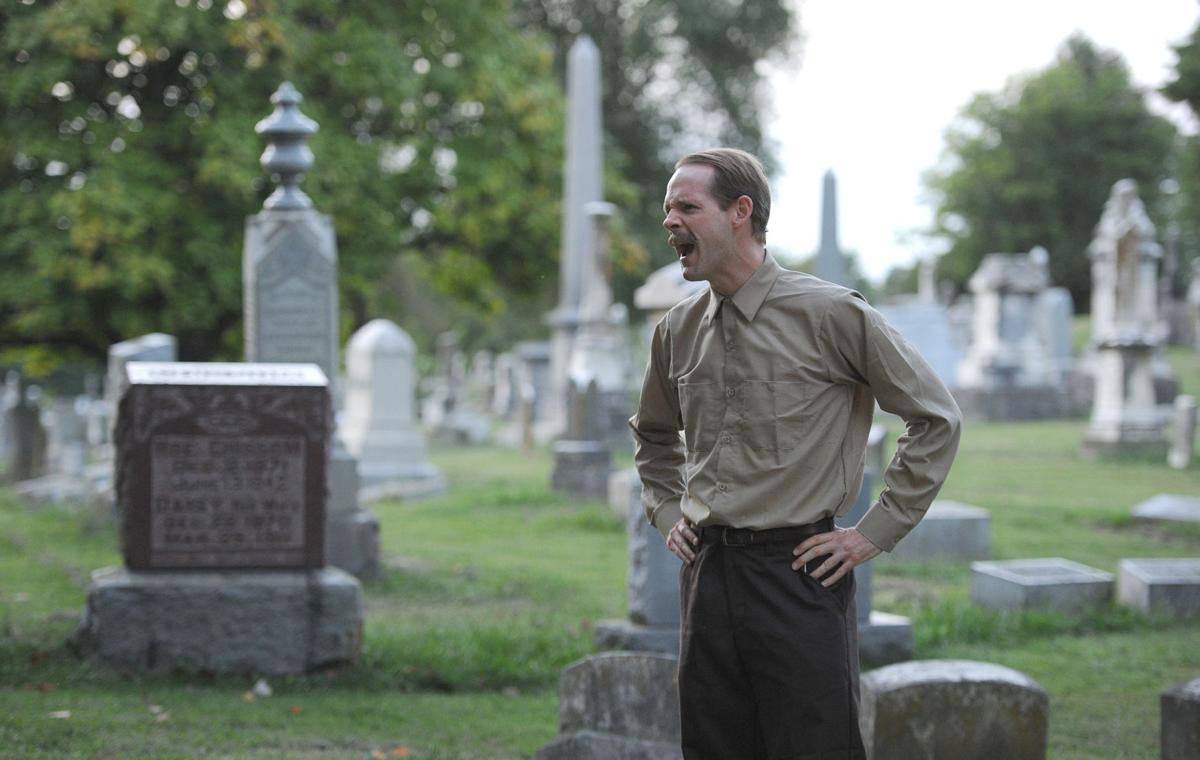 Worth Mountjoy plays the role of Air Force 1st Lt. John Lee Kirkpatrick, who was a prisoner of war in Germany for two years in World War II, during a rehearsal of the 14th annual Voices of Elmwood at Elmwood Cemetery.

Ava Wiggins, left, playing daughter Margaret Turnbull, and Jennifer Wiggins, playing mother Rebecca Turnbull, tells the story of the Payne and Turnbull families’ feud in Daviess County in 1851 during a rehearsal of the 14th annual Voices of Elmwood at Elmwood Cemetery. Ava and Jennifer are real-life daughter and mother. Voices of Elmwood was founded by the Owensboro Museum of Science and History in collaboration with the Daviess County Public Library.

Worth Mountjoy plays the role of Air Force 1st Lt. John Lee Kirkpatrick, who was a prisoner of war in Germany for two years in World War II, during a rehearsal of the 14th annual Voices of Elmwood at Elmwood Cemetery.

The 14th annual Voices of Elmwood kicks off Thursday and this year’s program features nine stories of individuals and events that have helped to shape the history of Owensboro and Daviess County.

More than 75 volunteers help to create the evenings that take place at Rosehill-Elmwood Cemetery that honor and highlight key figures and happenings in local history.

In the past, individuals who have their biographies read are buried in the cemetery. But in recent years, the event has featured the stories of people from the community who have interesting or important backstories.

Voices of Elmwood was founded by the Owensboro Museum of Science and History in collaboration with the Daviess County Public Library.

Patrons ride around the cemetery on wagons, equipped with bench seating and back support, and watch actors portray historical figures and events that are relevant to the area.

Wagon guides also provide additional historical information after each performance. Tours last approximately 75 minutes, and are not recommended for children under 12 years old.

Last year’s event had to be modified due to the pandemic, but Kathy Olson, the museum’s director, said she and other organizers are looking forward to bringing the event back “to as normal as possible” this year.

Only tent shows were offered last year, but this year the wagon rides return.

“We ask that everyone wears a mask, and we have decreased the amount of seating on each wagon ride to help people socially distance themselves,” Olson said.

Shows will continue every Thursday, Friday and Saturday through Oct. 2, and Olson encourages everyone interested in purchasing a ticket to do so as soon as possible as they tend to sell out quickly. Shows run from 6 to 9 p.m., every 30 minutes.

Tickets are $25, plus fees, per person for both wagon and tent shows. They may be purchased at www.owensborotickets.com.

Group sales of 10 or more will receive a 10% discount.

'I refuse to be a soundbite': Professor on tense exchange with Sen. Cruz

This year’s stories will feature:

• John Abner Agnew, the first African American to practice dentistry in Kentucky. He also founded J.A. Agnew & Company, which conducted most of the funeral arrangements for the Black community.

• Glover H. Cary, namesake of the Blue Bridge, formally known as the Glover H. Cary Bridge. He was a Calhoun lawyer who also served in the Kentucky General Assembly and U.S. Congress.

• Air Force 1st Lt. John Lee Kirkpatrick was a prisoner of war in Germany for two years and was wounded. He helped dig the tunnels, and was later portrayed in the movie “The Great Escape,” who was also a founding partner in Hartz-Kirkpatrick Construction.

• John W. McCulloch was employed by the U.S. Internal Revenue Service as a gauger, an official who tested the alcoholic strength of distilled whiskeys. Part of his story is the birth Green River Whiskey and its impact on this region.

• W. Ed. Mitchell was known throughout the Green River area as Owensboro’s leading clothing merchant and one of its richest businessmen.

• Year 2020 marked the 400th anniversary of the Mayflower’s arrival to Plymouth Harbor. The Manley Berry Tichenor family of Daviess County has ties to this historic event. Manley Berry Tichenor’s descendants include the Ashbys, Athertons, Soshes, and Tichenors (very large families in Daviess, Ohio and McLean Counties).

• The Feud: In 1851 in Daviess County, two men were left dead following a dispute over a fence. The Payne and Turnbull families were neighbors, living on Pleasant Valley Road in eastern Daviess County. The Payne family wanted the Turnbulls to leave open an area of their property for the Payne cattle to reach their watering source. The Turnbulls did not want to do this and proceeded to fence the area and cut off the Payne cattle from water. Mr. Payne and his son noticed this and proceeded in taking down the fenced area, which sparked a battle. When all was done, two men were dead due to multiple stab wounds. The trial was moved from Daviess County to Ohio County due to publicity. At the trial, the Turnbull family was acquitted.

• A Mother’s Love: Sara Catherine “Kitty” Foreman Lashbrook Wilhoyte had two sons, Martin and Seariah Lashbrook, that left home to join the Confederate forces. Seariah Lashbrook was injured in war, and Kitty went to visit him. She traveled to Washington, D.C., to see President Lincoln to seek the release of her son. When she arrived, the butler refused to let her in but the president happened by and motioned her in. An aged father was also at the gate asking for his son to be released. Lincoln granted both requests.

• Willa T. Furgason Wadleigh was born in 1914, she lived in Miami, Florida, and married a man who moved her to Harlan. After her son was born, she decided that eastern Kentucky was not a life for her and her child. She divorced her husband and moved to California. In the years after WW II, Willa worked on the refinement of the A-bomb’s successor, the hydrogen bomb. We also find her mustering into the U.S. Marine Corps in 1955 with a rank of E4. For 15 years, she worked as a research chemist at the Lawrence Livermore National Laboratory, Livermore, California, a facility that designed nuclear weapons. She worked with Edward Teller, the Hungarian-born atomic scientist who is often called “the father of the Hydrogen bomb.” Teller’s work in nuclear physics led to the development of the H-bomb in 1952.

'We've got an HR problem': Lieutenant governor on Trump's influence on GOP